Claire’s still pretty fresh off the front lines from the war that won’t happen for another two centuries, so her new-found status as a lady of leisure in the 18th-Century French social scene is definitely not cutting it for this former nurse.

Even if she gets to wear this amazing dijon mustard-colored cloak. WANT.

Even if she gets to wear this amazing dijon mustard-colored cloak. WANT.[/caption]

Jamie is single-handedly executing their shared mission to undermine the Jacobite Rebellion, which means he’s been haunting the halls of Maison de Madame Elise with Prince Charles on a nightly basis -- reeking of smoke and cheap perfume all the while -- and then dazzling Monsieur Duvernay with his chess match mastery levels by day. (Little does he know, what Jamie's really playing right now is him. And Charles. And the whole course of history, for that matter.)

Sleep'll have to wait 'til after the rebellion subsides, which may be never, but while Jamie's books are brimming with activities, Claire's bored to tears. Understandably so because right now, her days consist mostly of her being waited on hand and foot by her maidservants and taking tea with Louise and Mary Hawkins -- who are not her “ladies." She's not one with the first-world-problems-only squad, even if she is good at pretending to be.

Her latest social appointment does help her figure out what it was about Mary Hawkins that seemed so familiar to her before, but that's really only more bad news.

Turns out, young Mary is one of Frank Randall’s ancestors by marriage to Jonathan Randall. Which means not only is Black Jack Randall still alive and well (unbeknownst to Jamie, of course), but she actually needs him to stay alive for at least another year if she wants her future husband to ever exist. And clearly, she does.

Claire’s already been conflicted about whether, when, and how to give Jamie this important update on Captain Jack Randall’s survival of the siege, but before, her concern was about his state of mental wellness and commitment to the greater good. This new layer of her deceit comes from a much more selfish place. Or maybe it doesn't?

She’s torn up enough about it to spill the beans (well, most of them) to Murtagh -- after her inner turmoil turns into a giant temper tantrum about him getting busy with her lady’s maid.

Claire walks in on Murtagh and Suzette

(Cue the obligatory ooh la la for Murtagh finally finding something to like about France!)[/caption]

After her mini-flip out moment, she realizes she has to get it off her chest to somebody, and Murtagh's just the guy because he confirms her rightness in withholding the terrible news from Jamie. Her husband would rush off to Scotland and get himself killed over his thirst for vengeance the second he found out. So, good call waiting to fill him in just yet. (Unsaid but still true: It doesn’t *really* matter that she has this hidden ulterior motive, then.)

Next step: Shake off all this dreaded boredom, too.

The second perk to Claire walking in on Murtagh and Suzette’s beneath-the-sheets action is that she now has a reason to visit her favorite apothecary (who may or may not be double-crossing everybody, seeing as he still takes up with his supposed enemy, Comte St. Germain): Birth control options. There’s hardly a buffet of choices, even in her 1940s plane of existence, but apparently Witch’s Mugwort is the standard.

After she confesses to feeling like a lump lately, he suggests that she get back to it by volunteering at L'Hôpital des Anges, and she’s aglow once more.

Even though she might be in what others would call a delicate state right now, this is a woman who sewed up soldiers with fresh battle wounds for half a decade, not some slugabed who’s content to watch everyone else getting in on the action without her. So, she spends exactly zero minutes thinking about it before taking the carriage right on over and signing up for doctoral duty at the place which has an actual dog on diagnosis staff.

CLAIRE AT THE HOSPITAL

As Murtagh predicts, Jamie’s not crazy about her new job -- mostly concerned about her encountering some disease which might affect her pregnancy (she does taste a woman’s urine to diagnose her with “sugar sickness” aka diabetes, after all). He rants about her being indulgent when he doesn’t find her kept and waiting for him at home -- minus ten points for this temporary moment of hopefully insomnia-induced piggishness.

But he’s got troubles of his own to attend to, now that Charles may or may not be filling his war chest with funds from rich Brits.

He just needs a little bit more from the purse of the French King to “close the gap between what I have and what I need” and promises an alliance with Great Britain after the war’s won (although as Claire’s memory of history reminds us, England and France are a century away from getting along).

Duvernay wants proof of these generous Britons, and so does Jamie for that matter.

Enter Fergus, a skilled (albeit brash) little pickpocket who is willing to steal some letters for Jamie in exchange for keeping his past thievery a secret. Thanks to him, the group intercepts a letter written in German, sent from England, and musically coded as a variation of one of Johann Sebastian Bach’s many “inventions.”

The only person who can decipher the melodic message is Mother Hildegarde from the hospital, who just so happens to be one of Bach’s buddies and dismisses his work as “clever but [with] no heart” (WHAT?!). She helps the group discover a peculiar pattern in the notes as they relate to Bach’s original (the “Goldberg Variations”) -- and broker an unspoken peace agreement between Jamie and Claire over her work with the hospital -- which leads them to conclude that the oh-so-troublesome Duke of Sandringham is in the mix again. He’s playing both sides of this war-to-be to hedge his bets, which is very on brand with his usual duplicitousness.

New problem: If Jamie meets up with the Duke to convince him Charles’s rebellion is a bad investment, he’ll find out about Jack Randall (cue Claire as a living version of Edvard Munch’s “The Scream” as Murtagh insists they tell him).

For now, Jamie’s delighted to have gotten somewhere for all of his efforts over the past few months, and Claire can’t bring herself to bring him down about the news with Randall. For one thing, they’ve only just gotten somewhere in the effort to impoverish Charles’s campaign -- and really, they haven’t gotten anywhere even with that because they haven’t stopped the Duke from writing his checks to the Prince.

Finding out from Claire and/or Murtagh ahead of time would be much more merciful than him being blindsided by Sandringham -- or, worse, running into Randall himself -- but after all the bickering these two have been doing this week, it's honestly just nice to hear 'em talking nicely to one another again right now. We're sure this moment of zen won't last long, though. 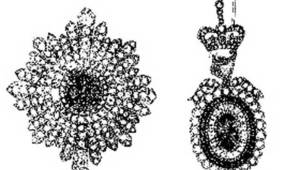