A River Runs Through It: River Derwent 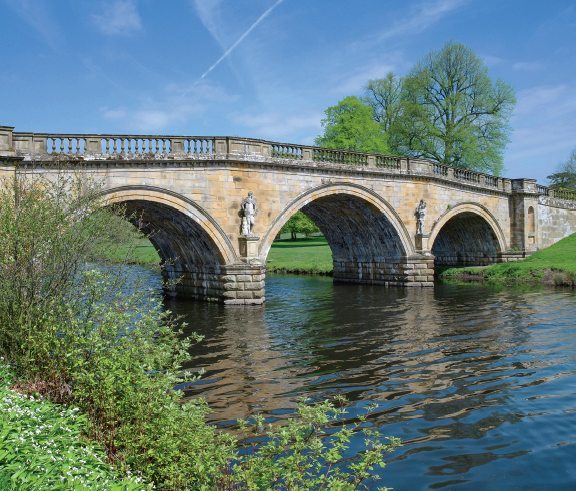 
Bleaklow Moor certainly lives up to its name—it’s easy to imagine the ghost of Heathcliff wandering here. The soil is wet and boggy, the wind whistles round your ears, the fog often descends and makes it easy to lose your way. Sometimes it has fatal results; low cloud caused the crash of a USAF B29 Superfortress in 1948, killing all 13 aircrew. Such is the rugged isolation of Bleaklow that the wreckage was left in situ, too difficult to remove.
For the hardy few who tramp across the moor, it’s easy to miss the rising of the River Derwent, initially a small stream, nothing impressive or spectacular to look at. It is an inauspicious beginning for a river that has shaped the Peak District, ensured the survival of its inhabitants and witnessed the birth of the industrial age. Who would have thought that this little trickle of water would change the course of history?
The stream gains in strength as it flows through north Derbyshire’s Peak District, gaining volume as the tributaries that drain Bleaklow join it. Don’t confuse this river with the other three Derwents in the north of England—the name derives from the Celtic for “oak valley,” of which there are plenty in this part of the country.
It isn’t long before our River Derwent feeds into three large reservoirs: Howden, Derwent and Ladybower. These bodies of water, which quench the thirst of nearby Sheffield, are a familiar sight to those that drive the A57 Snake Pass between Sheffield and Manchester. They were also familiar to the pilots of the Dambusters squadron, who flew training missions over the Derwent Dams in preparation for their attack on the Ruhr Valley in 1943. Time your visit to perfection and you might catch Europe’s sole remaining Lancaster bomber on a commemorative fly past—a sight to stir the hardiest of hearts. 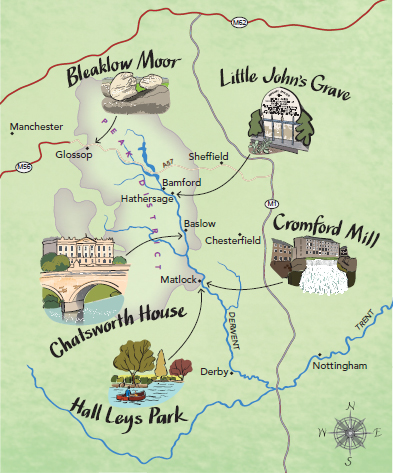 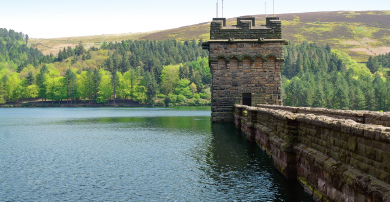 The dam at Derwent Reservoir was used by World War II “Dambusters” for their practice runs before heading for Germany’s Ruhr Valley.[/caption]

The Derwent’s modern role in providing water for the city-dwellers of Sheffield is crucial, but the river as source of life-giving water is nothing new. Leaving the reservoirs, the River Derwent flows steadily southwards through a number of delightful Peak District villages: Bamford, Hathersage, Grindleford, Curbar and Baslow. These communities have existed since medieval and early modern times —initially for sheep farming, now more reliant on visitors and tourism— but they would have not lasted without the Derwent and its vital water.
Each village has its own charms and reasons to visit: Baslow has a cluster of tea rooms, pubs and restaurants; while Little John, Robin Hood’s pal, is purportedly buried in a Hathersage churchyard. My personal recommendation is to leave the river briefly at Grindleford and journey the mile or so to Padley Gorge. Here you’ll find a pretty chapel honoring two Catholic martyrs that were killed during the Reformation.
Approximately halfway along its length, the Derwent provides its finest photo opportunity: Chatsworth House. Originally built by Bess of Hardwick and developed by a succession of Dukes of Devonshire, Chatsworth is the jewel in the crown of the Peak District. Put simply, if you find yourself in the Peaks, you must visit Chatsworth.
If the sheep-farming communities upstream relied on the Derwent for the basic necessities of life, the Dukes of Devonshire were wealthy enough to see it as a luxury to be played with. The Derwent flows past the western front of the house, but it is in the landscape gardens on the east and south sides where the water was put to use for leisure. The 24 steps of the cascade are thought to be England’s best water feature, while the Emperor Fountain can reach as high as 90 meters and can be seen from all around the estate.
Wander the parkland and you may also spot the fallow and red deer which roam freely—try looking close to the tree line. Then you must go and check out the lavish interior of Chatsworth House, from the state rooms to the Old Master drawings. You can easily spend an entire day here.
Just south of Chatsworth, the River Wye joins the Derwent. Avoid the temptation to track the Wye upstream to Bakewell, instead continue to follow the Derwent as it threads southeast to Matlock. Here you’ll find easy access to a riverside path from Hall Leys Park, a small but well-maintained green space with bandstand, boating lake, sunken gardens and café. If you want to explore the Derwent without getting your boots too dirty, this is the place to do it.
The riverside path gives you an opportunity to see the Derwent up close. But what about the big picture? For that you need to ride the nearby cable car at the Heights of Abraham, which boosts you 170 yards up Masson Hill from the valley floor. From here you can see the mighty force of the Derwent. The river has carved a deep valley over thousands of years, and it is from this vantage point that the sheer power of the water becomes clear. The geographical and geological processes at work are unstoppable.
Unstoppable, yes. But not untamable. The Heights of Abraham also offers a glimpse of our next stop along the River Derwent: Cromford. It was here that Richard Arkwright sought to harness the energy of the river to power the machinery in his textile mill. He was a pioneer of the Industrial Revolution and his techniques were quickly copied—first around Britain, then the rest of the world. Before Arkwright, spinners and weavers tended to work from home in family units. After Arkwright, the factory system dominated. The River Derwent really did power the Industrial Revolution.
Cromford Mill is now the centerpiece of the Derwent Valley Mills World Heritage Site and is worth a visit. A small museum sits in one of the mill buildings; others have been converted to the kind of attractions that this part of Derbyshire relies on now that textile industry has moved on: a garden center, a café, an antiques shop.
For the visitor that wants to get a little more detail on the Industrial Revolution and how this river impacted the world, however, walk a few hundred yards downstream to Masson Mill, another of Arkwright’s ventures. Like Cromford Mill, Masson Mill has been claimed by the modern world and is now a retail village, but the museum here is more impressive than its nearby counterpart.
The River Derwent continues on from Cromford, flowing through Derby and being subsumed by the River Trent just prior to Nottingham. Reaching these city centers is like returning to the 21st century. Persist downstream if you must, but I’d rather stay in the Peak District where the Derwent is at its most spectacular. 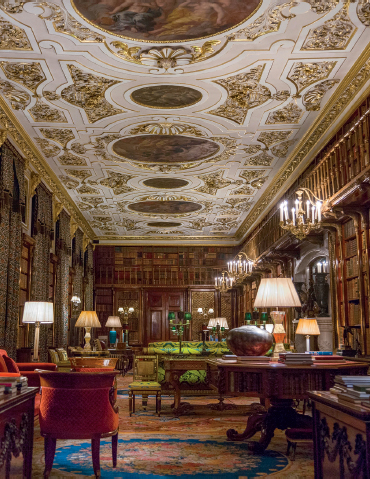 Roughly 25 of Chatsworth House’s 126 rooms are open to the public, and require a sizeable domestic staff to maintain to this day.[/caption] 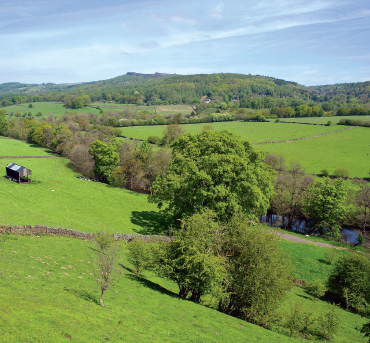 Winding its way south, the quiet River Derwent provides a broad valley of rich farmland, as well as water for the reservoirs of urban Sheffield.[/caption] 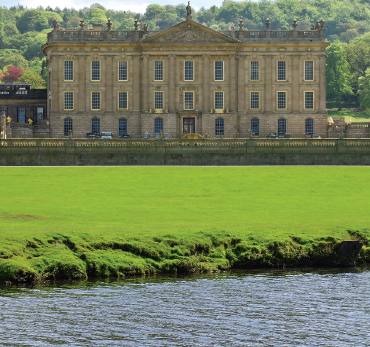 Known as the “Palace of The Peaks,” Chatsworth has been seat of the Duke of Devonshire and the Cavendish family since 1549.[/caption] 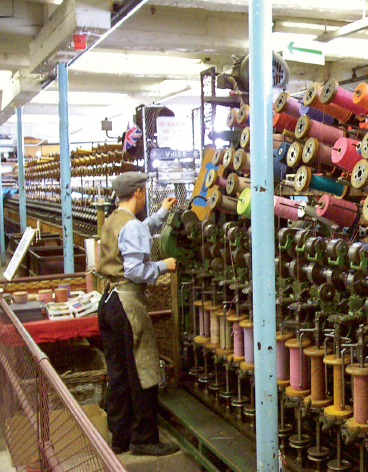 At Masson Mill, the cotton-spinning machinery still hums as it did in the late 1700s, but working conditions are undoubtedly safer and cleaner.[/caption]

Tracing the River Derwent through Derbyshire isn’t just a trip through a National Park, it is also a trip through time. The Peak District landscape that it flows through might seem like it hasn’t changed for thousands of years, but the river has been manipulated by successive generations. Not only did it become the lifeblood of the Peak District and the plaything of aristocracy, it drove Britain into the industrial age and changed the world forever. Not bad for a little trickle from rugged Bleaklow.

You can visit the River Derwent by road, but there is also a train service to most of the places mentioned here. Hop on at London St. Pancras for Sheffield, Derby or Nottingham, from where local services operate. www.eastmidlandstrains.co.uk
The Peak District has no shortage of accommodation options to suit every pocket, but book ahead if you plan on staying in July or August. Why not pretend to be a guest of aristocracy? The Devonshire Arms at Beeley and Cavendish Hotel at Baslow are both owned by the Duke of Devonshire. www.chatsworth.org/stay-with-us/hotels
If you want to see the Duke’s own home, a ticket to all visitor areas of Chatsworth will cost £20 for adults, but it really is a worthwhile investment. All the information you’ll need for a visit at www.chatsworth.org. For Cromford, Masson and Derby, the best portal is www.derwentvalleymills.org. Anywhere else on the Derwent is best served by www.visitpeakdistrict.com.