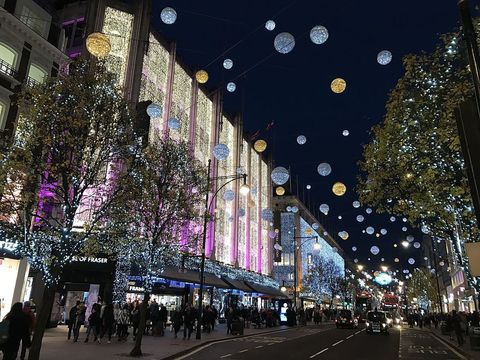 Dickens might have written A Christmas Carol, but he did not invent the holiday. Londoners have celebrated Christmas for around 2,000 years—give or take the odd Puritan. Pull a cracker as we look at a London Christmas.

Editor's note: Of course, due to the COVID pandemic travel is restricted somewhat and most events are canceled in order to obey social distancing. Let's just enjoy this article from a 2011 edition of British Heritage Travel and plan our Christmas outtings for 2021.

The 1963 Andy Williams’ hit “It’s the Most Wonderful Time of the Year” might seem the perfect soundtrack for Christmas in London, but the true flavor of the city can better be summed up by the much-loved carol “The Twelve Days of Christmas.”

Given that the city has seen nearly 2,000 Christmas days, with the exception of the years of the Puritan Commonwealth when such observance was distinctly illegal, it comes as no surprise that the population has learned some very ancient, yet enjoyable, traditions to celebrate the day. London acquires a special sparkle around Christmas time; the weather is frosty; snow is anticipated; the Christmas lights are twinkling, and shoppers hustle for presents for their nearest and dearest.

In the run-up to December 25th, there is a tingling anticipation in the city that is reflected in the carol and can create a wonderfully memorable London Christmas.

On the 1st day

Visit a pantomime. The panto is a sparkling theater tradition where audience members are encouraged to hiss dastardly villains and shout at the stage until their lungs burst. These are traditional fairy stories irreverently retold for modern children and adults alike that are embellished with cross-dressing dames and contemporary touches. From the popular West End theaters to local amateur groups throughout the city, pantos mark the beginning of the season with raucous fun and delight.

Visit Trafalgar Square, where, every year since the end of World War II, the Norwegian people have shown their appreciation of British wartime help by presenting a huge Christmas tree that is planted in Trafalgar Square and decorated in the traditional Norwegian fashion. Each evening, organized carol singers and passersby join around the tree to sing heartfelt renditions of traditional and more modern carols.

Watch the Great Christmas Pudding Race at Covent Garden Plaza, a seasonal charity race. Teams tackle quirky obstacles while carrying a Christmas pudding on a tray; observers are welcome to cheer on the teams as they run frantically around the plaza to raise money for charity.

Go back in time to a truly Dickensian Christmas at the Geffrye Museum in East London. The museum gives an insight into how Londoners have lived over the years. It’s a museum of English domestic interiors and has room sets from 1600 to modern times. Curators decorate each room in authentic festive style, providing a magical glimpse into Christmases past. Find out why we kiss under the mistletoe, decorate the tree, and throw cocktail parties. Admission to the museum is free.

Lace-up those skates and take to the ice at the Tower where the annual ice skating rink is set up. The rink operates in nearly all weather conditions, so suitable outdoor clothing is required. Hot refreshments can be obtained at the rinkside café, while the ancient walls of the Tower look down on all those enjoying the “Skater’s Waltz.”

Join in the celebrations at the ballet. Annually there will be some wonderful performances, such as the traditional Christmas Nutcracker or the beautiful Swan Lake.

Learn something you did not know at the Royal Institution Christmas lectures: demonstration-packed, fun-filled science events for young people. They are broadcast on UK television every Christmas and have formed part of the holiday tradition for generations. Inspiring children and adults since 1825, the Christmas Lectures were initiated by Michael Faraday. For more information visit www.rigb.org.

Go back in time to a Tudor Christmas at Hampton Court Palace. The palace holds Tudor Christmas celebrations over Christmas and New Year, with live Tudor cookery in its historic kitchen. There are opportunities to meet King Henry VIII and members of his court. Also, take to skates and enjoy a seasonal ice rink. 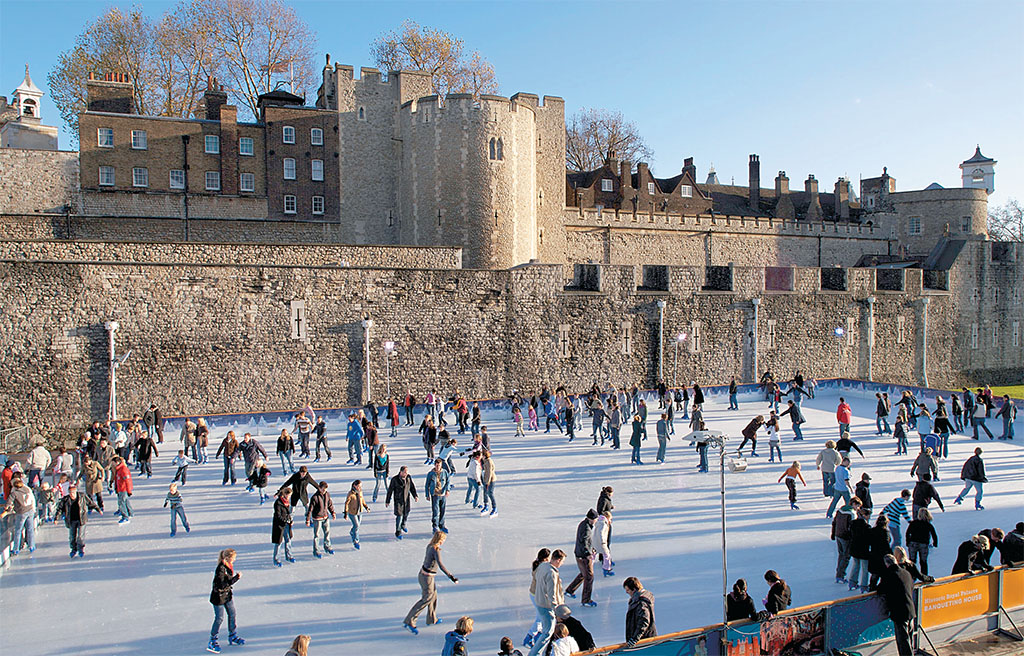 Seasonal public ice rinks are raised across metropolitan London, most famously in the moat of the Tower of London. JULIAN LOVE/PHOTOLIBRARY

Wait until after dark and take in the Christmas lights along Regent Street, Oxford Street, and Bond Street, as well as doing some well-deserved window shopping in central London. The Harrod’s Christmas Grotto is a longstanding tradition at its Knightsbridge store. Meet Father Christmas and share your wishlist for the festive season. All children will leave with a gift, and parents will have the opportunity to purchase a photo to remember the visit.

London has all the world’s major Christian faiths, so services marking the season are readily available. St. Paul’s serves Anglicans, while Roman Catholics will enjoy Midnight Mass at Westminster Cathedral.

Stand by the water’s edge and watch the traditional Christmas morning Peter Pan Christmas Day race in a chilly Hyde Park Serpentine. Wrap up warm as sometimes the ice has to be broken for the swimmers.

Don’t miss the Queen as she addresses the nation in her traditional Queen’s Speech on Christmas Day on the BBC and ITV channels.

In London, few restaurants are open on Christmas Day. Those that are will serve a traditional Christmas lunch: roast turkey, cranberry sauce, stuffing, sausages, and vegetables. A traditional dessert is Christmas Pudding, a rich, fruity, steamed, luxurious dish of raisins and brandy that is often brought to the table in flames. It can be served with brandy butter, custard or cream.

The eating of turkey at Christmas is a recent development. Into the 20th century, the goose was more common as a bird to eat at Christmas. Like a Thanksgiving meal, most Londoners will look forward to enjoying the Christmas meal with close family.

The day after - Boxing Day

The reason why December 26th is known as Boxing Day is, like the best British traditions, completely lost in time. One story is that the master of the big house would give his servants presents and food in boxes, while another story is that boys used to go around collecting money in clay boxes, which, when full, would be broken open. Whatever the reason, the result is a second, nonreligious day of rest that always accompanies Christmas. English families traditionally use the day to visit relatives or enjoy a sporting event. It is also a traditional day to enjoy fox hunting.

When a Bank holiday falls on a weekend, it is transferred to the following Monday. In 2010, as Christmas and Boxing Day fall on Saturday and Sunday, Monday and Tuesday will be Bank holidays.

No Christmas lunch would be complete without silly jokes, paper hats, and little toys that mystify and tickle the diner in equal measure. They are delivered in a small tube of fancy paper which is pulled in two directions and is destroyed with a satisfying bang as the gunpowder explodes.

For more than 160 years, British Christmases have resounded with the invention of a London candy maker who wanted to get an edge on his rivals. Tom Smith launched his “crackers,” which include sweets, novelties, mottos, paper hats, and small toys. You can spend from 50p to £10 on a cracker— the noise and gifts will always add to the fun of the day.

A word of seasonal warning: do not be tempted to take crackers home as souvenirs. Because they include gunpowder, airlines consider them to be dangerous goods, and you will not be allowed to fly with them. Instead, crack them open before you leave London as part of your festive celebrations.