Release Me and Let Me Love Again


RECENT ACORN MEDIA releases add to the library of videos available for collectors of several classic series that have been reviewed in British Heritage. For fans, none of these new series of DVDs will disappoint. For most British Heritage readers, any of these sets delivers several enjoyable evenings of top-drawer British entertainment. 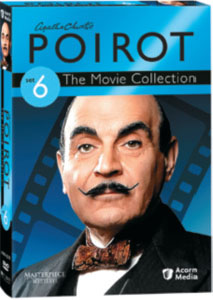 DAVID SUCHET is Hercule Poirot. By now, we know his quirks and smirks, righteous indignation and sartorial fastidiousness. After all, Suchet has been playing the elegant Belgian for more than 20 years. It’s an old friend who tackles these three mysteries, with all the flair and inscrutability that we expect. This set is a great addition to the Poirot canon. It’s little wonder that Poirot is the most watched series on PBS Masterpiece Mystery. 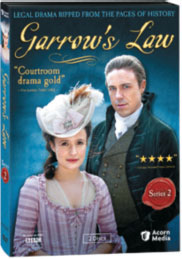 A SECOND SUPERB series follows the reforming barrister, William Garrow (Andrew Buchan), through the injustices of the 18th-century legal system. Defending the accused against the state was fraught with more than political disadvantage in Georgian England, but, then, leading a legal revolution has always been a dangerous business. British Heritage called the first series “BBC period drama at its very best,” and we’ve no reason to change our mind about the second series. 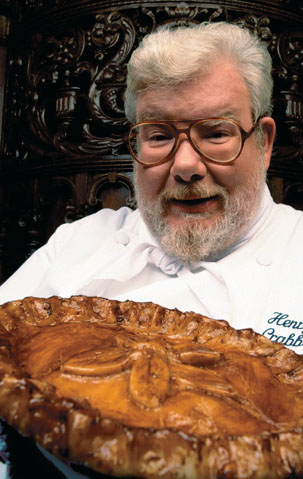 THE TIMES called The Pale Horse “the quintessential Agatha Christie murder mystery.” Julia MacKenzie is at the top of her game as Miss Marple in this feature-length production. In this case, a series of spooky murders takes Miss Marple to a village inn run by three modern-day witches. Unusually, a second version of the mystery is an adaptation starring Jean Marsh and Colin Buchanan that does not feature Miss Marple. Interesting. 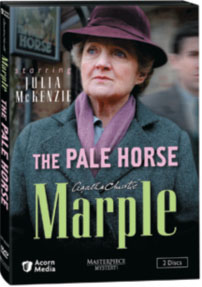 THE INIMITABLE Richard Griffiths returns as DI Henry Crabbe, the semi-retired detective who would much rather be in the kitchen of his restaurant, Pie in the Skye, than at the beck and call of the assistant chief constable. The unflappable Crabbe is surrounded by a cast of lovable characters, from his long-suffering wife Margaret and the kitchen crew at Pie in the Sky to the ever-scheming ACC Freddy Fisher. Here is a genuinely inventive series with a dose of humor. Much fun, and very English.

Magic Under the Stars: Open Air Theatre in Regent’s Park

ATTENDING A PERFORMANCE at the Open Air Theatre located deep within Regent’s Park, one of London’s loveliest areas, is always a feast for the senses. We smell the flowers that scent the air from the surrounding Queen Mary’s Garden.We see the sun break through during a performance, as it sets behind the stage. We feel the energy and creativity of the performance, whether it’s a revival of a musical or a play by Shakespeare. We taste the cakes available before and during the show. We hear the birds singing as they fly over head. My husband and I like to attend at least one of the four productions staged annually from May to September during the 16-week Open Air Theatre’s season.
This past summer’s current production of The Beggar’s Opera delightfully recreated the seedier side of 18th-century London, but showed how it wasn’t that different from the posher side of the city. I loved the use of period instruments for the songs and ballads that moved the story along. The Open Air Theatre is a treat anytime, however, and we always enjoy a night there.
It adds to the ambience of the night and makes for a complete evening to come early for dinner and drinks on the grounds before the performance. We mingle and meet with interesting fellow Open Air Theatre enthusiasts and chat before the show. While we have indulged in the theater’s delicious hot and cold buffet, as well as its scrumptious barbecue, we often bring a picnic basket from a branch of Carluccio’s, the Italian cafe that has several London locations, and dine al fresco on the glorious lawn. The long bar provides plenty of drinks before the performance and during the interval. What is more English than enjoying a Pimms at the Open Air Theatre?
The Open Air Theatre had its first full season in 1933. Over the years many well-known figures have performed there. It boggles my mind to know that Vivian Leigh appeared at the Open Air Theatre as Anne Boleyn in Shakespeare’s Henry VIII in 1936, or that Judi Dench was on its stage in Sweet Mister Shakespeare in 1976. The actor Ralph Fiennes made his professional debut as Curio on this stage in Twelfth Night in 1985. The list goes on and on.
The theater’s steeply raked auditorium is one of the largest in London with 1,240 seats, yet the Open Air Theatre maintains a feeling of intimacy, and makes me feel like I am in a much smaller space. Even the least expensive seats offer good views; there isn’t a bad seat in the house. On a chilly night we sometimes bring a blanket to put over our legs as one of the Open Air Theatre’s productions transports us to another world.

The seamier side of London life portrayed in John Gay’s The Beggar’s Opera turns out to be quite similar to life in more respectable circles.[/caption]

In addition to John Gay’s classic moral comedy The Beggar’s Opera, last season’s productions included an adaptation of William Golding’s novelLord of the Flies, Shakespeare’s Pericles (re-imagined for ages six and over), and Crazy for You, the George and Ira Gershwin toe-tapping musical. Performances proceed, if possible, in spite of the weather. In all the years we have been attending this outdoor theater, I can count on one hand the performances halted or canceled because of inclement weather. Somehow, the London weather makes a strong effort to cooperate during the Open Air Theatre season so that the show can go on.
As we make our way out of the theater and the park after an evening performance, we leave behind a magical world with fairy lights twinkling in the surrounding trees. Regent’s Park is closed at night, except for those of us who have been at the show, and we feel like we have this stunning area all to ourselves. We walk to nearby Baker Street tube station and can’t stop smiling over the wonderful evening we have had, once again, at the Regent’s Park Open Air Theatre.
The site www.openairtheatre.org offers detailed information about each season, how to get tickets, and the venue itself.
—Jennifer Dorn


KING GEORGE II is a largely forgotten monarch. Despite a long and eventful reign, he remains overshadowed in history by the novelty of his father’s Hanoverian succession and the eventful reign of the grandson who succeeded him. The latest volume in Yale’s English Monarch Series, George II unpacks a detailed portrait of this multifaceted monarch and his 33-year reign.
Born in Hanover in 1683, George Augustus came to Britain in 1714 with his father, George Ludwig as the new Prince of Wales. Relations with his father were rocky, but they were in good standing together when George I died and George Augustus inherited the throne in 1827.
In many ways, George II didn’t fit the mold of other English, and in particular, Georgian, monarchs. To begin, he was fiscally prudent, even regarded as somewhat tight with his money. Second, though European monarchs took mistresses as a matter of course, George seemed to do so simply because it was expected, and enjoyed a solid relationship with his wife, Caroline. 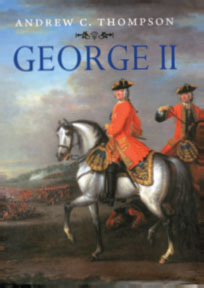 In one sense, Britain’s 18th century was dominated by its monarchs’ engagement in the complex politics and series of wars that convulsed Europe. George II’s dual role as British monarch and German prince dissipated his time, energy and interest, and did little to serve the particular long-term interests of Great Britain. In the context of the European conflicts of the time, the Jacobite rebellion of 1745, when Bonnie Prince Charlie led a Jacobite army as close to London as Derby, is seen as just a bit of a nuisance.
Domestically, George II’s reign was marked by the continued evolution of the executive branch of Government away from the personal prerogatives of the king to his government ministers. George’s extended absences in Hanover only contributed to the loss of the monarchy’s influence.
This is a helpful, au courant account of the man who was Britain’s head of state through a formative generation of history. Thompson did his homework, uses his sources well and delivers a nice addition to Yale’s series. Still, it is difficult to see George in a sympathetic light. We never seem to get to know him as a person, or care for him as in individual. While we get behind the closed doors of court and into the royal presence, George II himself remains aloof. Perhaps it’s not surprising that his loyal subjects felt the same way.Whether that is because of George’s Germanic inscrutability, the limitation on our historiography of his reign or the choices of Thompson is a little more complicated to unpack.