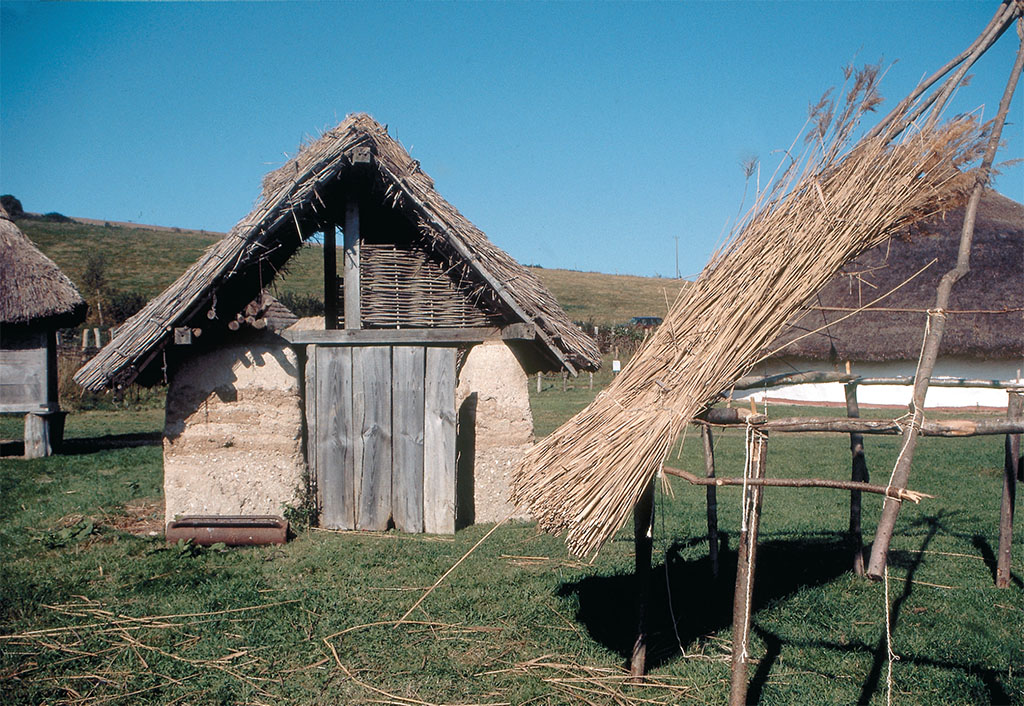 6
At sheds and outposts across the Butser site, Celtic and Romano-British crafts are practiced and taught.[/caption]

Butser takes a little getting used to. After all, if you walked into a Celtic roundhouse or a Romano-British villa of AD 200 anywhere else, it would be generally safe to conclude you were at a museum or a tourist attraction of some sort. Butser is different.

To be sure, Butser Ancient Farm is a fascinating, friendly—even homey—visit, but the “ancient farm” doesn’t exist for its visitors. Butser is a working scientific laboratory, where the unusual work of experimental archaeology is going on all around. Ancient crops, old-breed animals, building construction, woodwork, textiles, metal-working and all aspects of daily life 2,000 years ago are put to the test at Butser.
The premise is simple. Archaeological excavations yield artifacts of Britain’s Celtic and Roman past. And archaeologists come to conclusions about life 2,000 years ago on the basis of their discoveries. Here at Butser Ancient Farm, they take the findings of archaeology one step further, and put the suggested hypotheses to practical experiment.
The late Dr. Peter Reynolds founded the research program that is Butser in 1972. Its focus is the Iron Age of 1000 BC-AD 200 and Roman Britain of AD 43-400. The present site at Bascombe Copse, clearly signposted and just off the A3 about six miles north of Portsmouth, is the third to be developed over the years. From the road you can’t miss the broad, bronze expanse of the Great Roundhouse thatched roof. 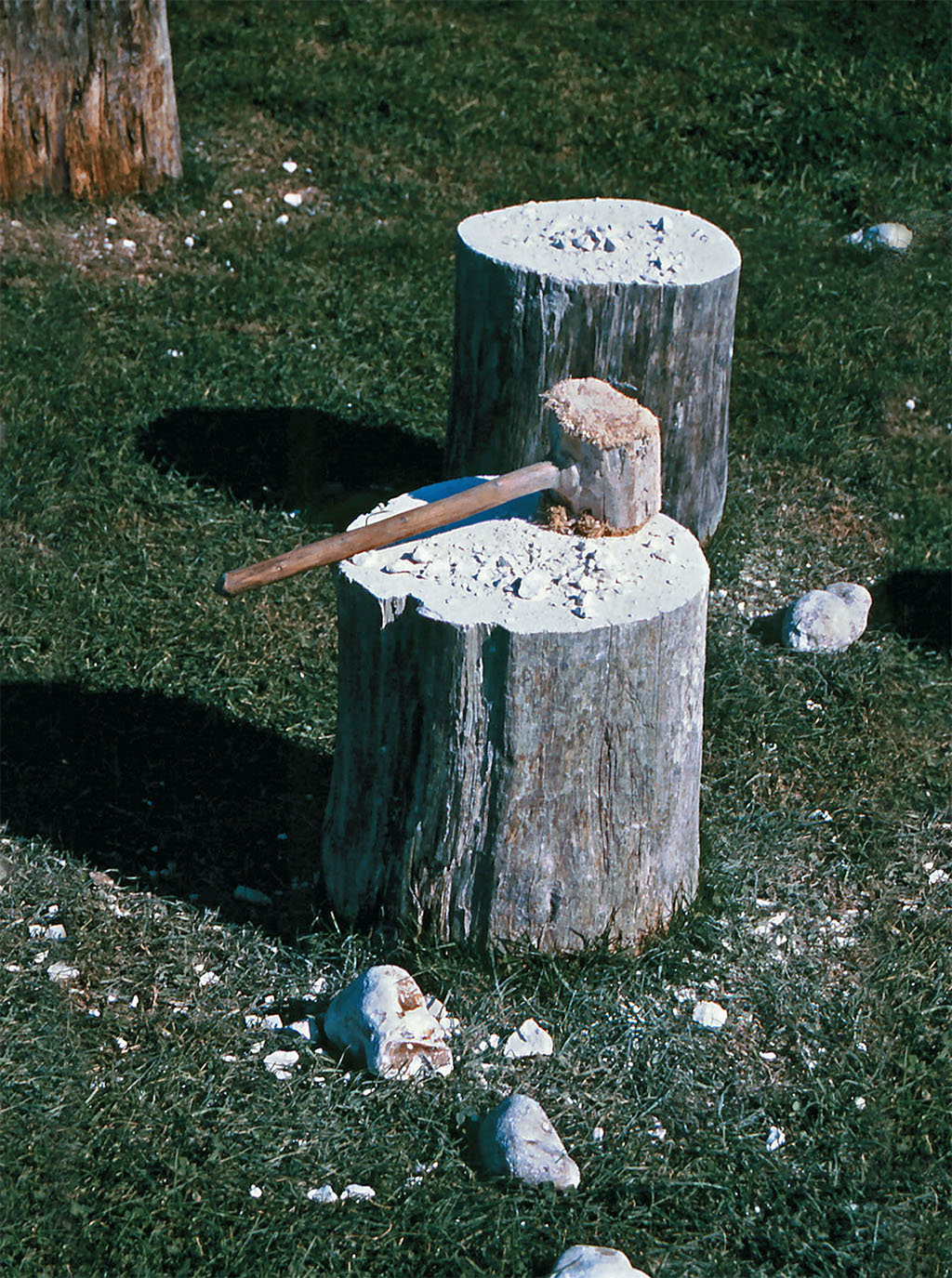 At the center of the farm, the Great Roundhouse is based on an excavation made at Little Woodbury, near Salisbury, Wiltshire. There have been several great roundhouses at Butser, as over the years fresh discoveries are being made about their construction and maintenance. The Little Woodbury roundhouse was just completed last year. With a diameter of 49 feet, it encloses more than 1,700 square feet of floor space and supports a roof weighing more than 25 tons. Those Celts were no flimsy builders; such great houses were built to last 200 years.
Several smaller roundhouses dot the farm site as well, based upon excavations made at Moel y Gerrdi, Wales, and Glastonbury, Somerset. “We take building plans from around the country and start over with the mon a fresh site.We are unique in that way. And we have the biggest roundhouse in the country,” jovially boasts Simon Jay. “I came here for three months to work on the Roman villa six years ago, and I’m still here,” he laughs. 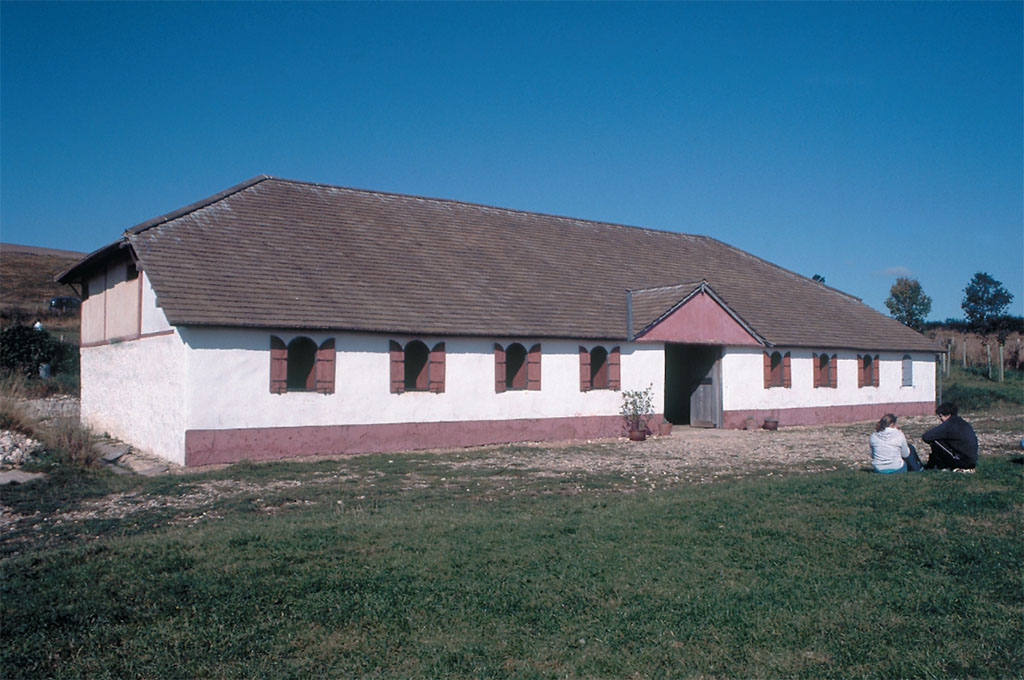 6
Constructed in 2002, the Sparsholt Roman Villa is still a work in progress.[/caption] 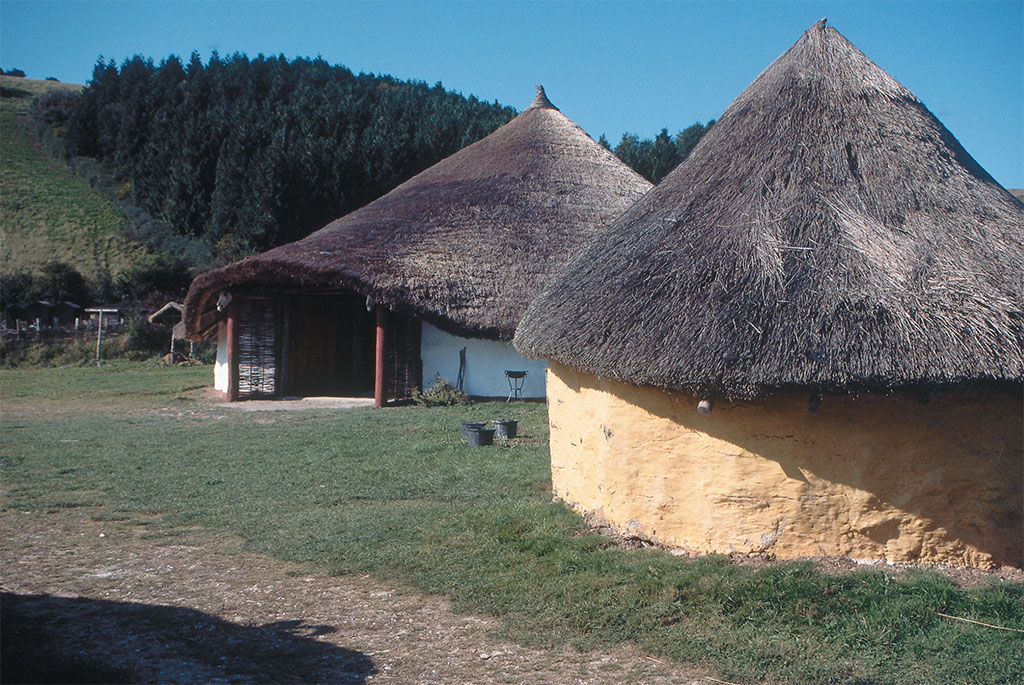 6
Two of the smaller roundhouses are based on excavations of the mounds at Glastonbury Lake Village.[/caption]

The new Roman villa, like all buildings at Butser, was based on the archaeology from a specific site. This construction is the Sparsholt Roman villa, excavated west of Winchester between 1965 and 1972. Roughly 70 feet by 40 feet, the villa is built of flint bonded with hot lime mortar made to the original Roman recipe. It took 200 tons of flint and 112 tons of mortar to build the walls.
It is early days yet on the Roman project. A sign in the villa reminds visitors that “This villa is by no means finished; as with any new home the walls are still drying out, there is some remedial work to do and the floors still to lay.” Then they will begin a fundraising project to furnish the villa and build a courtyard garden.
“It would have taken 60 to 100 acres to have sustained a Celtic farm like this, both arable and woodland,” explains resident archaeologist Steve Dyer. “The farm would be home to some 50 to 60 people—a clan, or extended family.”
A pole lathe here, a discarded grainpit there, a charcoal-burning mound: The site is “very much an ongoing work,” Dyer affirms. Herbs, woad and cereals are grown in the gardens and small fields. In fact, this is the only place in Europe growing Iron Age cereals like early forms of wheat and barley. Long-term experiments under research conditions, protected against modern agrochemicals and cultivated by ard and spade, study potential crop yields of grains two millennia ago.

“A pole lathe here, a discarded grain pit there, a charcoal-burning mound: The site is very much an ongoing work”

More than 10,000 schoolchildren a year come to Butser for visits to their really old past. There are several areas for hands-on instruction in archaeology, including a forest of tree stumps and rough wooden mallets, for breaking white chalk into fine powder for whitewash. Kids really get into smashing that soft limestone.

COME SEE BUTSER FOR YOURSELF


The welcoming staff at Butser Ancient Farm is delighted to receive visitors. You can stop in anytime after 10 a.m. on a weekday. Though there are often special events on weekends, the farm is not regularly open on Saturday or Sunday.
For further information, access the Butser Website at www.butserancientfarm.co.uk.

Elsewhere across the farm enclosure other students are learning to weave long, flexible poles into fencing.
In the northwest corner of the site, there is a fresh grid-staked dig. Here Dyer teaches the basic techniques of hands-on archaeology and students try their own hand with the trowel. Of course, the sandy dig site is seeded with enough pottery shards and animal bones to keep things interesting.
Don’t look for a fancy tearoom at Butser. Visitors’ amenities are at a minimum, though there is a small shop. Expect a little disorder here and there. Expect a rare old-breed sheep to escape from its hazel-plaited enclose. Expect actual ongoing experiments disguised as piles of detritus begging for order. It’s a wonderful visit! 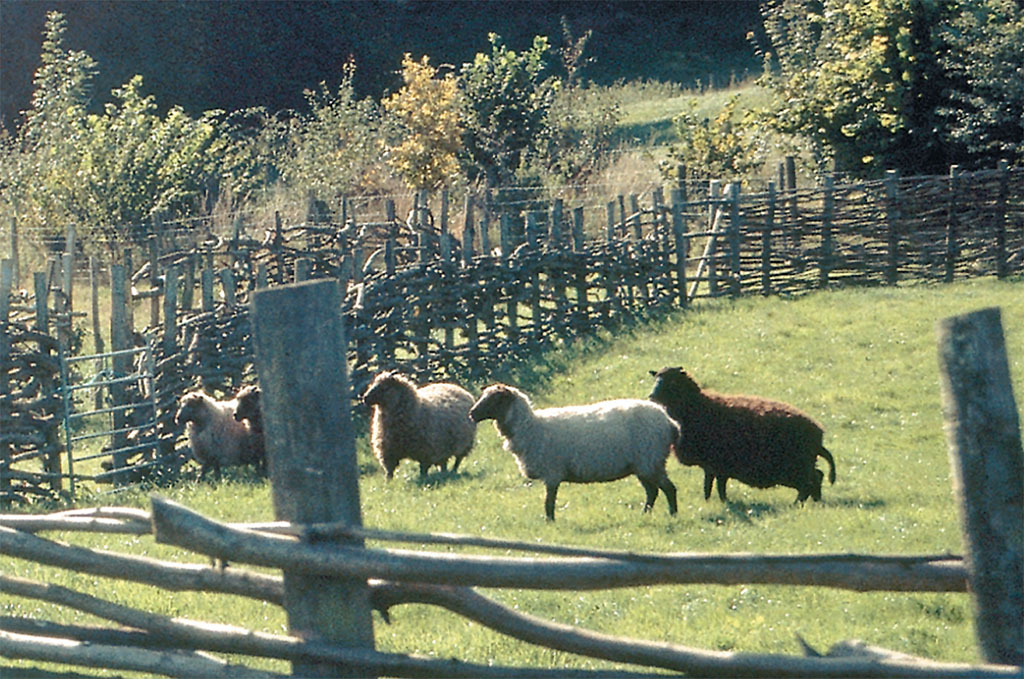