How The Raven got back it’swing 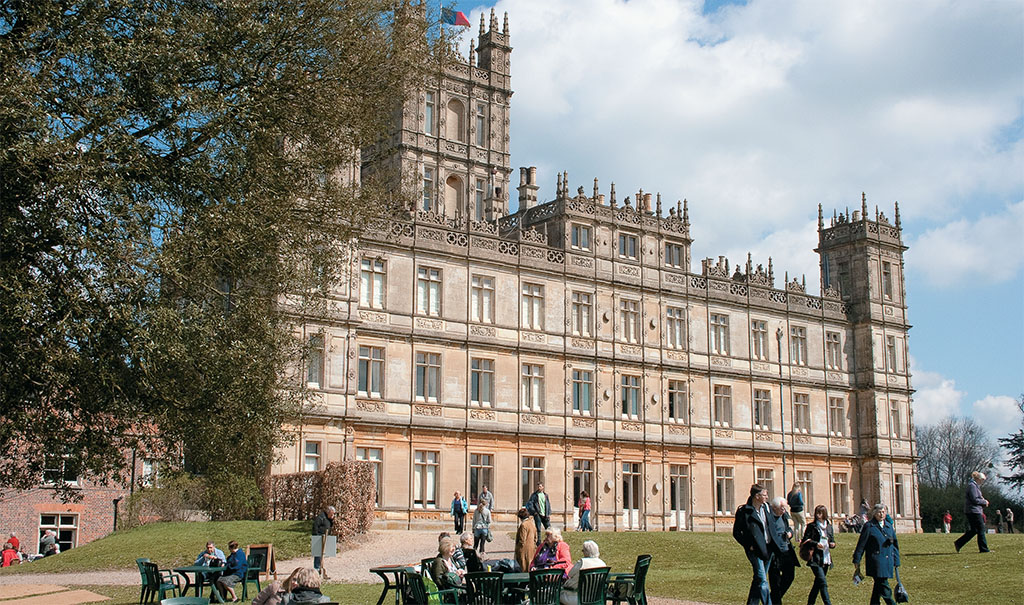 5
Doug MacPherson and Oliver Beardwood are among more than three dozen volunteers who revived and run the village pub in Llanarmon-yn-Ial.[/caption]

All the world loves Downton Abbey. From Boston to Brisbane, fans around the globe are eagerly awaiting the fourth season of the most popular British costume epic since Brideshead Revisited. Andifnot quite all the world, then a very high percentage of British Heritage readers. What’s not to love?
The sweeping period drama chronicles the historical events and early 20th-century lives of the residents of stately Downton Abbey, home to the Crawleys—the Earl of Grantham and his family—and all who ebb and flow in its umbra. Drawing on the upstairs/downstairs tradition of Upstairs, Downstairs, the structure itself is a popular, proven series format. With three-dozen characters whose individual lives at Downton the viewer is expected to follow and care for, there’s someone with who manyone can identify.
The lavish production of the Edwardian nobility’s elegant world is both dizzying and dazzling. Upstairs, this world is governed by the conventions of the aristocracy as much as by the hierarchical order radiating from the Earl of Grantham, his mother, the Dowager Countess, and his American-born wife, Cora. Downstairs, the pecking order is even more rigid, with the butler, Mr. Carson, and the housekeeper, Mrs. Hughes, unassailable at the top of the social pyramid.
There are few grays in the Downton Abbey world. Right, wrong, done and not done are clearly known by all. Much-applauded author Julian Fellowes has made sure that we know black from white in this world as well. There are the good guys and girls and there are the villains.
In fact, the pace of the story has been justly criticized for its sheer speed. Complications and resolutions occur in the myriad subplots conveyed by only a few sentences of dialog. You certainly have to pay attention.

“The Edwardian nobility’s world was both dizzying and dazzling”


Among the questions I have been asked most about Downton Abbey is how accurately the series depicts Edwardian and post-Edwardian life in an aristocratic home such as Downton. Are we getting the real picture?
In most respects,we are. The one element that does not ring true is the easy interaction and conversation between the upstairs world of the family and their peers and the downstairs world of the hired help. That just didn’t happen (or at least not on such a scale). Most of the family wouldn’t have even known a housemaid’s name. These great country homes had back stairways for a reason. There’s not going to have been much interaction between these social sets, let alone much of an emotional connection. Of course, it always takes some element of the improbable to make a story a story instead of a dull narrative.
Downton Abbey is inexplicably situated in distant Yorkshire. In “real life,” the series is shot at Highclere Castle, near the Berkshire market town of Newbury. What was originally, and probably more accurately, named Highclere House, the “castle” has been the ancestral home of the Earls of Carnarvon for more than 300 years. Its present residents are the youngish 8th Earl and Countess of Carnarvon.
With unknown crowds of others, I went to see Highclere Castle this spring—just to catch the buzz and a few pictures. While Highclere Castle is open to the public regularly only from July through mid-September, they do open for a two-week spring season at Easter. Most folks were there to visit Downton Abbey. In fact, a huge marquee had been erected on the back lawn to serve as an auxiliary tearoom to the regular café located downstairs in the old housekeeper’s suite.
No, somehow the crowds didn’t dampen the experience at all. I wandered the grounds, where folk were picnicking and kibitzing with the gardeners. 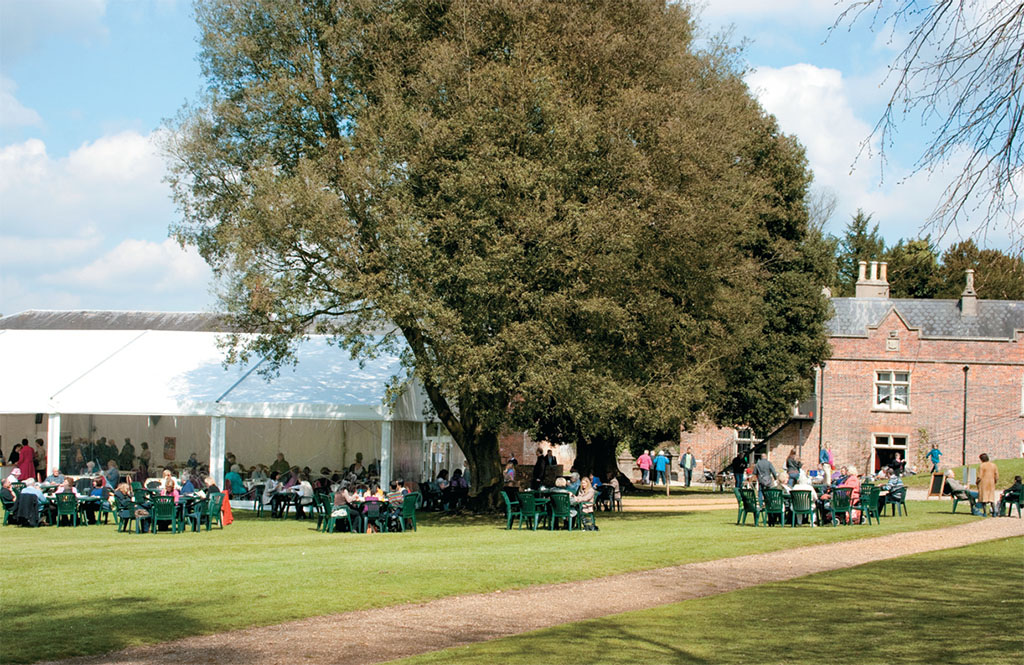 5
These young friends found the East Lawn a perfect spot to picnic on a visit to Highclere.[/caption]

The stream of visitors into the house was controlled to keep the flow from feeling crowded or hurried. Stewards in each room were helpful with questions, but not obtrusive. The Earl and the estate staff are hardly oblivious to Highclere’s new reincarnation as Downton Abbey in popular imagination. Each room contains a photo placard identifying how the room has been used and filmed in the series—from the Grand Parlor to the bedroom where the unfortunate Mr.Pamouk stayed, eh, briefly.
It’s a grand house indeed. It ought to be. Designed and built by Charles Barry, architect of the Houses of Parliament, Highclere is one of England’s showcase Victorian mansions. Certainly the ground floor reception rooms are recognizable from the series. You won’t see Lady Mary or Carson gliding out of the dining room—but it’s easy to imagine.
Downstairs, the old servants’domain has long been turned to more functional service space. The path of the house visit takes you downstairs to the tearoom and out into the carriage house yard and gift shop. Vestiges of the old service quarter remain. In the lower hall, the old bell board still hangs, where maids and footmen could be summoned by bell to any roomin the house. I counted the named rooms signaled on the bell board. There were 64.
The other question about the series that I’ve received time and again still remains: “Whatever happened to the world of Downton Abbey?" 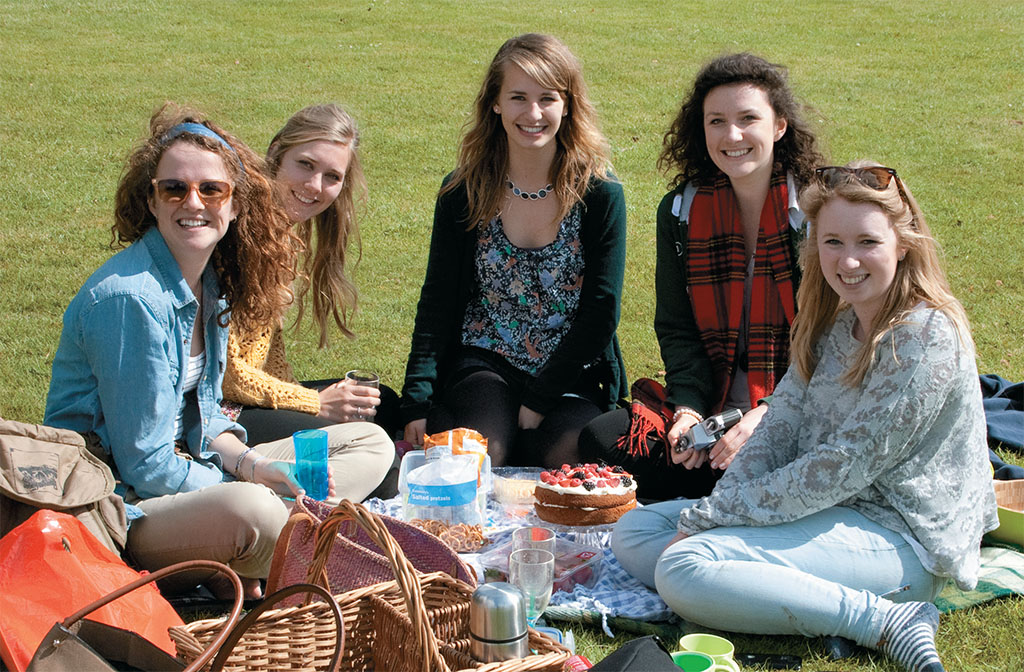 5
The press of fans now visiting Highclere has prompted the estate to open an extra tea tent.[/caption]

Part of the enjoyment we derive from period dramas like Downton Abbey is our understanding that these are, indeed, images of times past, from a world that no longer exists and will never exist again. The halcyon life of the British landed aristocracy reflected at Downton Abbey, though, is less than a century old. Why did it disappear so quickly and so completely? Where are Britain’s Downton Abbeys today?
Well, they write books about that. There is a short answer, though, and part of it is found in the series itself: The Great War. Among other effects of the war, Europe’s conflagration virtually drained Britain of a generation of young men. For the men remaining as well as for women, new avenues of employment quickly opened up that competed well against the option of domestic service.
Britain’s economic engine had already changed, however. Wealth no longer lay in the land that supported the old aristocracy; it lay increasingly in manufacture and in commerce. Social and political power had shifted as well. Through the early 1900s, the working classes increasingly realized the power of their voice and vote. The social institution that best represented community for nonagricultural workers became no longer the church or chapel, but the trade union. The unions provided workers with social clubs and institutes, a small measure of economic safety net and incrementally a better working life. And the unions exercised the political power of their united working-class voice.
When the Labour governments came in between the wars, they began a systematic program to dislodge the landed wealth of the hereditary peerage and gentry. Among the primary means of doing so was the establishment of death duties at deliberately confiscatory levels. It was, after all, the land that provided the principal income to the estate—in the form of ground rent. As the old baron died, his family had to sell up significant quantities of land to pay the death duties. That left measurably less rental income to maintain the estate and the family.
After a couple of generations, there was just nothing left—or not enough left to maintain a home like Downton Abbey. From Devon to Durham, hundreds of families were left with these huge,magnificent, historic albatrosses around their neck. From the 1920s-1960s scores of such stately homes were simply torn down. Dozens of grand country homes were gradually ceded to the National Trust, who do a monumental job of conserving them for the nation. Most of those still in private hands open their gates, gardens and doors to paying visitors—whose admissions serve to provide the vastly expensive maintenance costs. In many cases, enterprising old stock have enhanced their entertainment appeal with everything from safari parks and farm stands to hosting weddings.


It was the 5th Earl of Carnarvon who famously discovered the tomb of Egyptian boy-king Tutankhamun in 1922. The Egyptian Exhibition at Highclere Castle show cases a collection of artifacts the Earl assembled during more than 20 years of archaeological excavation in Egypt.

Whatever happened to Downton Abbey? It became Highclere Castle. The series has raised the profile of Highclere Castle just as Brideshead Revisited did for Yorkshire’s Castle Howard. The cast and crew of Downton Abbey has already shot more than 100 days of filming on location there. The swell of visitors this spring is undoubtedly only a foretaste of the paying guests the house will receive during the summer season. The rest of us will patiently await our return to Downton Abbey on Masterpiece Classic coming this winter on PBS. 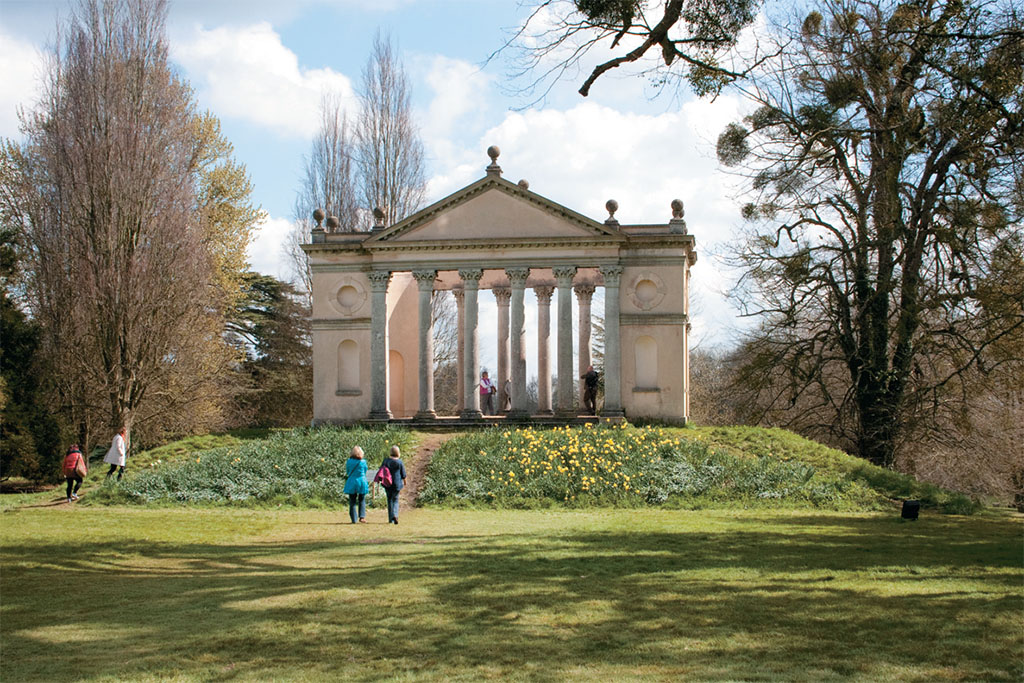 5
The colonnade called Jackdaws Castle was built to make a pretty view from the house.[/caption]