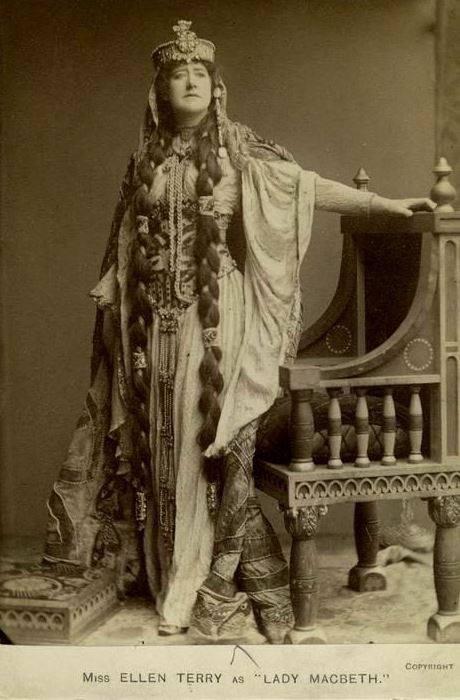 One of the greatest Shakespearean actresses to ever grace the British stage, Ellen Terry's flamboyant life and vibrant personality are revealed in a tour of the 16th-century house where she spent her last 30 years.

For years, a haberdasher's shop on one side of a narrow street in Coventry bore the inscription, "Birthplace of Ellen Terry," while a tripe shop opposite declared itself "the original birthplace." An equal amount of confusion surrounded her date of birth. A clerical error in filing her birth certificate misled Ellen, throughout her life, into believing she was a year younger than her actual age.

In reality, Ellen Terry, the greatest English actress of the 19th century, was born 150 years ago, on 27th February, 1847. Her parents, Ben and Sarah Terry, lived on the edge of poverty, earning meagre wages as strolling theatrical players who travelled from town to town. Ellen was their second child; six more children survived.

All the Terry children expected to follow their parents on to the stage. As a youngster, Ellen's pale yellow hair recommended her for her first stage part as the Spirit of the Mustard Pot. But she screamed so forcefully when they tried to squeeze her into the mustard pot costume that her father told her reproachfully she would never become an actress.

Nevertheless, by the age of nine, Ellen appeared on the London stage as Mamillius, the son of King Leontes in Shakespeare's The Winter's Tale. On the first night, while pulling a go-cart around the stage, she tripped. Weeping, she declared it to be her "first dramatic failure." The critics, including Lewis Carroll, felt otherwise, calling Terry "a beautiful little creature, who played with remarkable ease and spirit."

Despite her blooming theatrical career, Ellen willingly sacrificed the stage at age 16 to marry the distinguished painter G.F. Watts, who was 30 years her senior. Watts wrote to a friend to say "I can hardly regret taking the poor child out of her present life and fitting her for a better." Watts' masculine charm dazzled Ellen, and a kiss from him overwhelmed her. She once confided: "I was sure that kiss meant giving me a baby."

Within a year, the marriage had failed. A later deed of separation cited "incompatibility of temper." Watts agreed to pay Ellen £300 annually, 'so long as she shall lead a chaste life.' The amount would drop to £200 if she returned to the theatre.

The thought of being abruptly sent back to her parents mortified Ellen. Three years later, defying Victorian moral convention, she eloped with the architect Edward Godwin, called by Oscar Wilde 'one of the most artistic spirits of the century in England.'

The couple set up house in a cottage in Hertfordshire. Ellen adored country life and was delighted when their daughter, Edith, known as Edy, was born in 1869, followed by a son, Teddy, in 1872. Teddy, with his straw-coloured hair and angelic smile, later broke the hearts of half the women in Europe. Edy, a stalwart small figure, would hit Teddy on the head with a wooden spoon for crying, exhorting him to "be a woman!"

Sadly, Ellen's domestic bliss did not last. Godwin spent less and less time at home and money grew scarce. When the bailiffs finally seized the cottage in 1874, Ellen, with sadness, accepted an offer to return to the London stage. Her country idyll had come to an end and, within two years, so did her relationship with Godwin.

Fortunately, her professional life proved more successful. She played Portia to great acclaim in 1875, and as Olivia, in an adaptation of Oliver Goldsmith's The Vicar of Wakefield, she became the idolized heroine of the London theatre. During its run, Ellen married the attractive actor Charles Kelly, but his heavy drinking soon soured the relationship. After a few years, she later recalled, "I gave him three quarters of what I earned and prayed him to go."

In 1878, Henry Irving, the greatest-drawing actor in London, leased the Lyceum Theatre and engaged Ellen as his leading lady. For Ellen, then 31, and Irving, 40, this began an electrifying partnership that lasted more than 20 years. In preparation for her leading role as Ophelia in their first production, Hamlet, Ellen visited local asylums to study inmates' behaviour. After the first performance, however, she flung herself into the arms of a friend, crying, "I have failed, I have failed!" But, again, the critics thought otherwise, many praising her extravagantly.

Ellen played almost all Shakespeare's heroines at the Lyceum and the company frequently toured America. Her natural style of acting and extraordinary rapport with her audience made her one of the world's most beloved stars. Terry held strongly decided views on the characters she played and expressed these views in her performances. She particularly disliked Desdemona's weakness and passivity, and believed that Lady Macbeth "is no monster . . . Her strength is all nervous force; her ambition is all for her husband."

In the autumn of 1900, Ellen bought a beautiful half-timbered, 16th-century farmhouse at Smallhythe in Kent. She had seen it for the first time some years before when driving in a pony trap with Irving around the marshlands between Rye and Tenterden. She fell in love with it at first sight, emphatically stating that this was where she wanted to live and die.

The property, called Smallhythe Place, included two adjacent cottages, one of which Ellen gave to her daughter, Edy, and a large Elizabethan barn. The main house originally served as the port house to the busy local shipyard. But as the sea receded and agriculture took over, the property began to be called "The Farm." Ellen planned to retire there 'as a dear old Frump in an arm chair.'

At Smallhythe Ellen could relax, leaving her busy stage life behind, and sit cross-legged on the floor, her white hair pinned up with red combs. She created her own rose garden, played with her son Teddy's children, and boated on the small inlet.

Ellen continued to act at the Lyceum until it went into liquidation in 1902, due to rising operational expenses and a disastrous fire, which destroyed the theatre's magnificent sets. Terry later referred to this last decade at the Lyceum as 'the twilight of the Gods'. Although the early passion of her partnership with Irving had long since waned, his death in 1905 nevertheless devastated her.

Two years later, while acting in Bernard Shaw's Captain Brassbound's Conversion, in America, Ellen made another attempt at marriage. Her final husband, James Carew, was an actor in the cast and four years younger than her own son. "I give it two years," said her daughter Edy acidly. Her son Teddy uncharitably called his mother "unmarriable." But Ellen continued to exude love and warmth to all those around her, unable to confine her affection to just one person.

Now well into middle age and with parts becoming scarce, Ellen began to give lectures on Shakespeare's heroines. This series proved to be highly popular, and in 1914 she toured England, Australia, and America. But the passing years took their toll on her sight and memory, and finally, by the early 1920s, her grip on reality began to weaken.

In 1925, Ellen Terry was made a Dame of the British Empire. She received the award in a wheelchair and spent much of the remainder of her life quietly at Smallhythe Place, just as she had wanted. There, on 21st July, 1928, she died.

After Ellen's death, her daughter Edy dedicated her life to turning her mother's beloved Smallhythe Place into a museum. Now, open to the public and filled with her mother's personal and theatrical mementoes, the house resonates with the vitality she exuded during her lifetime.

Her bedroom, filled with family pictures, ornaments, (including her much-loved collection of painted pigs) and her modest dressing table designed by Edward Godwin, remains virtually as she left it. Other rooms emphasize her professional career. The Costume Room showcases some of her costumes, such as the striking red gown she wore as Portia. The Lyceum Room features portraits of Henry Irving, the travelling bed Ellen took with her on tour, and stage accessories such as the tiny satin ballet shoes she wore as a child actress. Ellen treasured the gifts given to her and mementoes of other actors adorn the display cases and walls of the Dining Room. The Terry Room contains more intimate objects, including her theatrical make-up basket, sewing box, and the amber beads she frequently wore.

Edy transformed the large barn into a theatre and persuaded actors such as John Gielgud, Edith Evans, and Peggy Ashcroft to perform on the anniversary of Ellen's birth. She continued in her tireless efforts until 1939, when, impoverished and battling to keep the house open, she turned Smallhythe Place over to The National Trust. Since that time The Trust has continued in Edy's tradition of honouring her mother's memory. The Elizabethan barn still stages productions by the Barn Theatre Society.

Ellen's love of Smallhythe Place was understandably strong. "This is my own house, bought with my own money," she once said proudly. It still is a beautiful house, grown even more attractive by virtue of the memories it now holds.