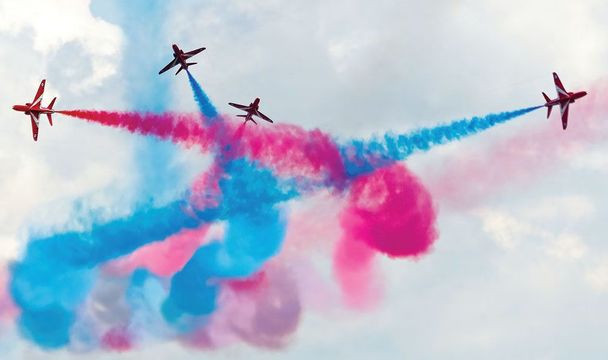 
The Wright brothers’ famous first flight took place at Kitty Hawk in North Carolina, but it didn’t take long for Brits to embrace the newfangled flying machines. The first airplane to take to the skies from British soil did so in 1908; the following year saw the first flight across the English Channel. Fast-forward 100 years and London’s airspace is the busiest in the world, with more than 150 million passengers passing through its airports each year.
The history of British flight may only encompass a century, but there’s plenty to pack in; from Sopwith Camels and Spitfires to Comets and Concorde. So turn off your mobile phone, fasten your seatbelt and join us on a journey to the finest aviation museums the British Isles have to offer.


Richard Shuttleworth was a charismatic interwar gentleman with spare cash and a love of speed. When not competing as a racing driver on the track, he collected aging cars and aircraft and gave them a new lease of life at Old Warden Aerodrome near Bedford. Shuttleworth died in an air crash during World War II, but his collection of wheeled and winged vehicles was retained by his family and turned into a museum. The aerodrome now houses more than 40 aircraft spread over six hangars. The engineering workshop continues to house vintage airplanes undergoing restoration and rehabilitation, many of which are the last of their type.

The undoubted highlights of the Shuttleworth Collection are five Edwardian planes that date to the earliest days of flight. One, a Bleriot XI, was constructed in 1909—just six years after the Wright brothers’ historic flight—and is currently the world’s oldest airworthy plane. Seeing the wood-and-canvas Bleriot in the air never fails to elicit both wonder and alarm in any onlookers. The first Edwardian pilots were brave to take to the air in it, the modern pilots who rely on the original engine more than 100 years later are spectacularly so. shuttleworth.org


Like this? Why not… Travel to the scene of the first flight in Britain at the Farnborough Air Sciences Trust Museum in Hampshire.


If you want everything about the history of flight under one roof, then look no further than Britain’s largest aviation museum: the Imperial War Museum, Duxford. As the name suggests, it covers all aspects of warfare, including a Bristol Fighter that operated out of Duxford in 1920, a Messerschmitt Bf-109 downed in the Battle of Britain and the Tornado that flew more missions in the Gulf War than any other. There’s also a hangar dedicated to American air power, complete with the last B-24 Liberator in USAF service and an F-111 Aardvark that saw action in Operation Desert Storm.


IWM Duxford also has a collection of 12 civilian airplanes, including iconic airliners like the Concorde, the de Havilland Comet and a Hawker Siddeley Trident rescued from Nicosia Airport during the Turkish invasion of Cyprus in 1974.
IWM Duxford plays host to three major air shows each year: Duxford Air Show, Flying Legends and American Air Day. The latter offers an opportunity to see Duxford’s own Sally B, the only airworthy B-17 Flying Fortress in Europe. You won’t be disappointed if you time your visit to coincide with a show, but even if you don’t, Duxford remains an active airfield with two runways, so historic planes come and go on a daily basis. iwm.org.uk/visits/iwm-duxford


Like this? Why not… Get an overview of a different kind of flight at the Helicopter Museum in Somerset.


It’s fitting that the Midland Air Museum focuses on the jet age, because it was in Coventry that Frank Whittle, inventor of the jet engine, was born. Exhibits here cover both the military and civilian impact of the jet age, neatly illustrated by its two biggest airplanes: a Vulcan bomber and a huge Argosy cargo transporter.
Yet Coventry’s aviation history includes more than just Frank Whittle—it was also the home of aircraft manufacturer Armstrong-Whitworth. As well as the Argosy, the company was responsible for building the Meteor, Sea Hawk, Javelin and Hunter; an example of each is on display.
midlandairmuseum.co.uk

Like this? Why not… Find out more about Britain’s great jet heritage at Tangmere Military Aviation Museum in West Sussex, home to the Hawker Hunter that broke the world air speed record in 1953.


It didn’t take long for Britain’s generals to spot the potential that airplanes offered on the battlefield. The Royal Air Force was formed in April 1918 when the infant aerial strands of the army and navy were merged, although many initially questioned the need for a separate air force. It’s a story well-told at the RAF Museum at Hendon Aerodrome in north London, a place that takes visitors through the entire history of the illustrious institution, from rickety World War I biplanes to the complex technology of modern-day Typhoons and Tornados.

Be aware that the Battle of Britain Hall is undergoing a year-long refit and will open again in 2018, although many of the aircraft that roamed the skies in 1940 will be temporarily relocated elsewhere on-site. The story of these brave pilots in the Battle of Britain certainly needs to be told—as Winston Churchill famously put it, “Never in the field of human conflict was so much owed by so many to so few.” Elsewhere, for a small extra charge you can watch an immersive film in the 4D cinema, take the controls of a flight simulator or sit in a Spitfire cockpit. It all adds up to a great day out. rafmuseum.org.uk/london

Like this? Why not… Investigate the “few” further at the Kent Battle of Britain Museum, located on a wartime fighter base.


Just like its sister museum at Hendon, the RAF Museum at Cosford covers the history of the Royal Air Force from its founding to the modern day. The reason to travel to the Shropshire branch rather than the easier to reach London site, however, is Cosford’s Cold War exhibition. It tells the story of Britain’s role in the Cold War through her aircraft—particularly the V Force bombers: Valiant, Vulcan and Victor—but it also puts the Cold War into context. Sit in a Beetle, Mini or Trabant driven by ordinary Europeans on both sides of the Iron Curtain, play Cold War games and find out how spies used the dead-drop stone to pass messages.


For something different, make your way to the Test Flight exhibition. Here are housed some weird and wonderful experimental aircraft that were dreamed up by innovative designers but never made it to the production line. Among the fanciful designs are a Bristol 188 (the Flaming Pencil), and a Meteor jet fighter flown by a pilot who was lying down.
rafmuseum.org.uk/cosford
Like this? Why not… Explore the history of aviation in the Royal Navy at the Fleet Air Arm Museum in Somerset.


Airplanes didn’t just revolutionize warfare—they also shrank the world. By the middle of the 20th century, people and goods had the ability to navigate the globe quickly, leading to a huge transformation in the way we do business and take our vacations.
The National Museum of Flight—Scotland’s biggest aviation museum—has the usual military history displays, but it also has a hangar dedicated to civilian air travel. Included are a small Jetstream built to ferry a dozen or so passengers and, at the other end of the scale, part of a Boeing 707. Don’t miss the de Havilland Comet, the world’s first jet airliner. Its introduction proved Britain was at the forefront of civil aviation, although the Comet suffered a number of fatal crashes over its lifespan.
A separate hangar is dedicated to the Concorde, the supersonic pinnacle of British and French engineering at the end of the 20th century. As well as being able to walk right through the iconic aircraft, visitors learn what it was like to be one of the lucky passengers or crew who flew on board. nms.ac.uk/national-museum-of-flight
Like this? Why not… Watch airliners take off and land at Manchester Airport’s Runway Visitor Park, which also accommodates five static aircraft for planespotters to explore.


The East of England was dotted with hundreds of airfields in World War II. Many fighter bases were found in Kent, while the longer-distance capabilities of bomber crews saw them stationed in East Anglia and Lincolnshire. Most of these airfields have now disappeared, melting back into the fields, but the former RAF East Kirkby has been turned into a museum commemorating the exploits of the bomber boys.


Lincolnshire Aviation Heritage Centre’s exhibits are stuffed with details about the planes and people that called this part of England home. Visit the old control tower to see a mock-up of a mission in progress, then wander the other buildings to find out more about life on the home front and the airmen who crashed and escaped from occupied Europe.


The highlight of any visit, however, is getting up close and personal with Just Jane, a Lancaster bomber built just too late to see action in the war. Although she no longer flies, arrive on the right day and for £310 you can take a 15-minute ride in the old girl as she taxis up and down the runway. lincsaviation.co.uk
Like this? Why not… See Britain’s only airworthy Lancaster at the Battle of Britain Memorial Flight Visitor Centre, only nine miles from East Kirkby.