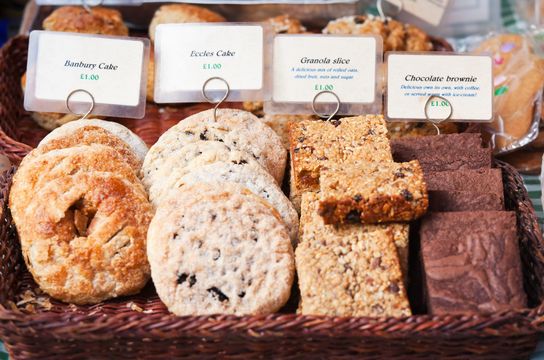 Hand made Banbury Cakes, Eccles Cakes, Granola Slices and Chocolate Brownies for sale on a stall at a UK Farmer’s Market.Image: Getty Images

Visitors to Britain soon spot the country’s love of cakes, pastries, and all things baked. High Street bakeries, country tearooms, fancy hotels, and simple market stalls parade such enticing arrays that having to choose just one treat is hard. Here are some of our favorite British delights.

British bakers learned many of their recipes from European countries, especially France, but also Switzerland and Italy. British emigrants took their favorites to North America and other countries, so now many baked goods are international. But Britain retains many distinctive cakes and bread, and a strong tradition of home baking.

Saffron breads and buns are unique to Devon and Cornwall. Fat Rascals, which have almonds and cherries, are Yorkshire’s favorite scone. Bath buns and Sally Lunns are the pride of Bath. While these rarely appear beyond their native region, some once local treats are now available everywhere. Eccles cakes and Chorley cakes—little pies filled with dried fruit—come from the Lancashire towns that gave them their name. Other examples include Chelsea buns, Yorkshire parkin, Bakewell tarts, Scottish shortbread, and Dundee cake.

It’s impossible to sample everything, but thinking in terms of the main categories of British baking helps guide you through its enticing maze. 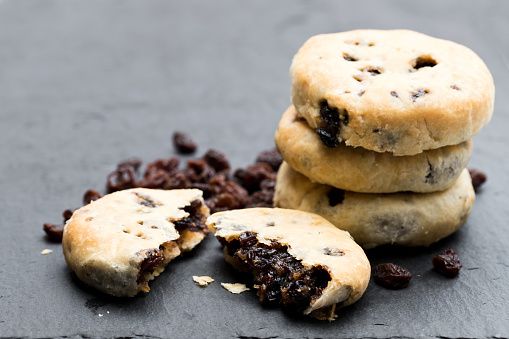 “And I had but one penny in the world, thou shouldst have it to buy gingerbread,” said Shakespeare’s Costard, evoking the affection and festivity that floats around this ancient and British favorite.

Nowadays most gingerbreads are cakes or cookies, but they originated as bread—specifically as breadcrumbs mixed with honey to form a paste that could be molded. Medieval pastrycooks delighted their masters with gingerbread studded with cloves and washed with gold. At fairs, young people charmed each other with gingerbread people or pigs called “fairings.” In the 18th century, cheap molasses from Caribbean sugar plantations replaced expensive honey, and most British gingerbreads became darker and often spicier.

Today you may find chunks of crystallized ginger zinging sticky ginger cakes. In Yorkshire, parkin is a dark gingerbread made partly with oats. Pale Grasmere gingerbread from the Lake District also contains oats and was a favorite with William and Dorothy Wordsworth. Ashbourne gingerbread from Derbyshire is a delicate lemony ginger cookie, inherited, so it is said, from French prisoners of the Napoleonic wars.

Commercial ginger biscuits, much appreciated for dipping in tea, are everywhere. “Knocking the gilt off the gingerbread” refers to damaging the gold leaf atop medieval gingerbreads, and by extension to a spoiled pleasure—like a ginger biscuit that falls apart in your teacup perhaps. 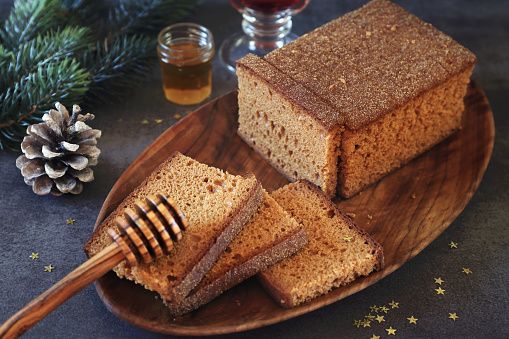 Read more: Here's how to make the perfect cuppa

Until the late 19th century, only professional bakers or wealthy homes had ovens. Most people cooked over a fire and baked on a slate bakestone or on an iron griddle (also called girdle). English muffins, crumpets, pikelets, oatcakes, pancakes, and scones were favorite griddle cakes.

Today scones are invariably baked in the oven, and griddle baking is rarer, though it has not disappeared. Currant-dotted Welsh cakes, aromatic with nutmeg or mace, come off the griddles in Welsh homes and bakeries. Scottish drop scones are also griddled. Crumpets, pikelets, and English muffins are now generally commercially made, though English muffins made at home puff up more mightily.

Derbyshire and Staffordshire cafés serve yeast-raised oatcakes made on a griddle. With bacon, they are time-honored breakfast fare, as are potato cakes from the griddle in Ireland and northern England. Bannocks of barley or mixed rye and wheat are also traditional in northern areas. 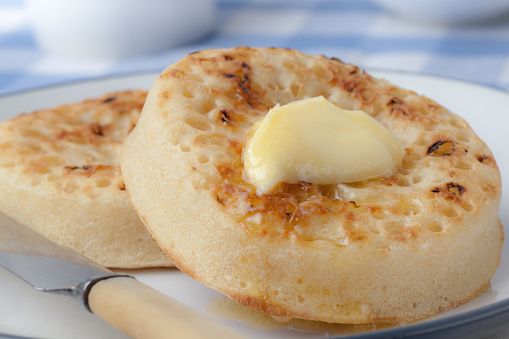 Britain has a multitude of fruitcakes, including many regional and seasonal specialties. Sugar, spices, and dried fruit, especially raisins, currants, and dates, are the crucial ingredients. All arrived in medieval Britain with 13th-century crusaders returning from the Mediterranean lands. Since they were imported they were expensive and therefore just the thing for celebrations.

A handful of dried fruit and a pinch of spice could transform ordinary bread dough into a loaf to celebrate the harvest. Used with a prodigal hand, dried fruit was the heart of the celebration cakes of well-to-do Renaissance aristocrats and merchants.

For everyday occasions, there are undecorated fruitcakes and a host of buns and bread dotted with dried fruit and candied peel. Welsh bara brith is a distinguished example. The fruit is soaked in tea so the bread is appealingly moist and flavorful—a tea-time favorite in Wales. The much-loved sticky toffee pudding is actually a date cake served with a luscious caramel sauce. 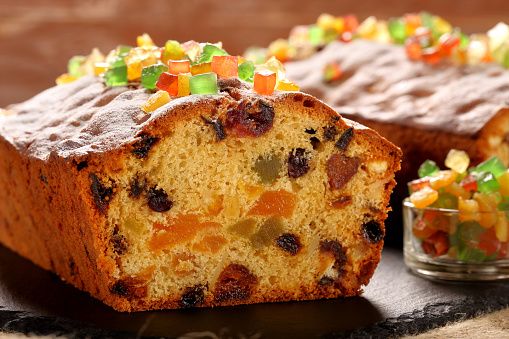 Sponge cake and its cousins

Technically, sponge cakes are made from a cloudy foam of eggs and sugar with flour. Some sponges are fat-free, but British bakers usually prefer the génoise style that includes a small amount of melted butter.

Among the country’s huge family of sponge cakes, visitors will spot many that are uniquely British. Battenberg cake is an oblong checkerboard of yellow and pink squares encased in marzipan invented to honor of the 1884 marriage of Prince Louis of Battenberg and Queen Victoria’s granddaughter. Queen Victoria herself is memorialized in Victoria Sponge (or sandwich): two layers of buttery cake filled with raspberry or strawberry jam and buttercream.

Coffee cake in Britain means a coffee-flavored sponge with a coffee or mocha frosting garnished with walnuts, hazelnuts or chocolate. Cherry cakes—and also cherry scones—are usually almond-flavored and lavishly studded with crystallized cherries. Orange cakes are often garnished with sugar-coated orange slices. Lemon Drizzle cakes are infused with sweet lemon syrup that dries to a crunchy top. Madeira cake topped with crystallized citron was devised for nibbling with a glass of Madeira or sherry.

Seedcake plentifully speckled with caraway seeds—and never long out of the pages of Victorian novels—was for eating with tea. These latter two cakes are less common than formerly. On the other hand, sponge cakes filled chock-a-block with whipped cream and berries or jam, are in every bakery window, and home bakers cheerfully make them for birthdays and summer parties. 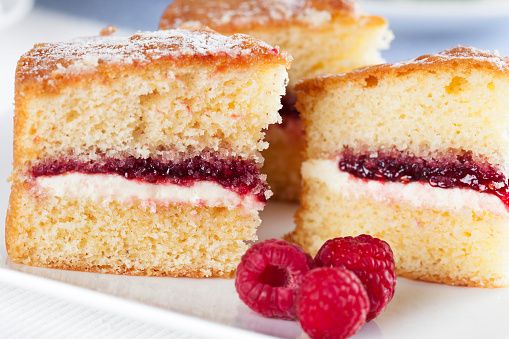 Pavlova and other meringues

Central European bakers invented meringues in the 17th century. English bakers soon learned the secret and called them sugar puffs. Since then meringue confections, including macaroons and meringue-topped tarts and fruit desserts, have become British favorites.

The most popular are cream meringues—two meringue ovals clasped by swirls of whipped cream—and pavlova, a much-loved party dessert. Both Australia and New Zealand claim to have created pavlova in the 1930s to honor the visiting ballerina Anna Pavlova with a meringue confection resembling her tutu.

Pavlovas are usually large with high crisp sides and lower marshmallowy centers billowing with cream and bright with berries or tropical fruit. Christmas pavlovas have red fruit such as raspberries or pomegranate seeds. Easy to make as well as delicious to eat, pavlova is affectionately nicknamed “av.” 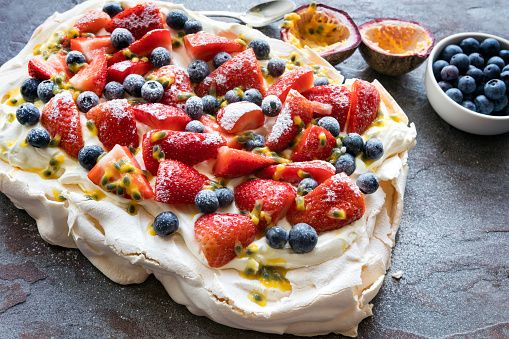