Throughout the centuries, the Watermills of England have adapted to meet changing demands. Now, mills that ground grain give Water power a new meaning

WATER WAS FOR CENTURIES Britain’s main source of power, and at Gants Mill in Somerset it is making a remarkable comeback. Looming over a quiet valley a mile downstream from the ancient town of Bruton, the tall stone edifice gives the visitor a first impression of great antiquity and power. But though the walls are old and the foundations medieval, this watermill has a new role—generating electricity.
The first recorded watermills in Britain date from the 8th century, when Saxon invaders brought with them new technology and engineering skills, and by the 11th–century Norman Conquest there were more than 5,000 around the country. With bread the universal staple, the watermill revolutionized food production and made the miller’s role vital (if not always valued).
Aloof from other folk in his castle above the water, the miller was neither churchman nor landowner yet he had power, and this made him a decidedly equivocal figure in medieval society. The miller was resented for his monopoly of water power, but that power shaped medieval England in a way we tend to overlook.
It is no accident that Gants Mill retains the name it derived from John le Gaunt, who built a fulling mill on land granted to him by Hugh Lovel, Lord of Castle Cary, in about 1290. Le Gaunt’s venture would enjoy success for half a millennium, propelled by a royal decree in 1275 that imposed a tax on the export of raw wool.
Previously, wool had gone more or less straight from the sheep’s back to Flanders, but now it had to be made into cloth. In a long and elaborate process, the raw wool was first spun and woven. Then, the rough cloth was taken to a fulling mill to be scoured and felted. Before the invention of the fulling mill, people had no option but to remove the raw wool’s dirt and grease by stomping the cloth in buckets of water mixed with pig’s urine. So, the introduction of wooden hammers driven by waterpower constituted a genuine industrial revolution. The addition of fuller’s earth—a limey kind of clay—improved the cleansing process further.
Nevertheless, it still took 12 hours to process a batch of cloth, after which it was hung up on racks to dry. These racks were also known as tenters, and the tenterhooks used to stretch the drying wool in place are remembered today whenever someone says that they are “on tenterhooks.”
Indeed, the cloth trade dominated medieval English life, and the wealth it generated funded the building of churches and manor houses. In Bruton, the delightful 14th-century parish church of St. Mary owes its existence to a trade that owed much of its profitability to the cheap muscle of the watermill.
Merchants continued to export finished wool from Somerset for more than 400 years. For most of that time Gants Mill was owned by the Westons of Stalbridge, Dorset, who leased the mill to a succession of wool merchants. A still-extant document of 1619 describes a lease to William Yerdburie, including “all those two water milles commonlie called and knowne by the name of Gauntes Milles,” along with various parcels of land. Amazingly, the annual rent of 40 shillings and four pence was exactly the same as it had been in 1360.
The succession of Westons continued through the 17th century, with William Weston (1667-1727) cutting a dash in London society. No less an artist than Hogarth painted a portrait of his four daughters, the youngest of whom, Betty, was reputedly the model for Sophia Western in Henry Fielding’s famous novel, Tom Jones. William, Lord Berkeley, bought Gants Mill from Thomas Weston in 1733 and subjected it to a major renovation—funded by the development of Berkeley Square and other prestigious sites in London. A new woolen factory was built on the foundations of the ancient fulling mill and this, the present east wing of Gants Mill, survives today.
Not so the Somerset wool industry, which could not compete with the factories of Yorkshire and Lancashire as the Industrial Revolution took hold. In a few short decades, techniques and methods that had changed little since Geoffrey Chaucer’s time were rendered obsolete, and lacking the concentration of resources and modern communications to compete, Somerset began its long decline.

NOT THAT GANTS MILL was idle. Grain still had to be milled, and even in the era of steam, water (or gravity) remained the most cost-effective source of power. Meanwhile, as Napoleon marched on Moscow, another ambitious Frenchman by the name of Theophilus Percival bought Gants and built what is now the west wing for use as a silk mill.
Once again, a shift in government policy spurred the entrepreneur. Some years earlier the British government had banned the import of woven silk goods, and with raw silk coming in from imperial India it made economic sense to locate a throwing mill—where the silk was cleaned, spun and thrown by machine to make a thread—in rural Somerset, since power was free and labor cheap.
At a time of agricultural recession, the factory was able to attract an army of 200 women and girls—some as young as 8—who were prepared to work long hours for minimal pay. As you look up at the windows high in the wall of the building it is not hard to imagine their plight. Inside, it seems impossible that so much machinery and so many people could have fit into so small a space, but these cramped and dangerous working conditions were of course typical of the age.
No more than 20 years later, however, another governmental change of heart resulted in the embrace of free trade, and the British silk industry collapsed. By 1840 it was back to corn milling at Gants, while the silk workers drifted away to join the legions of the urban poor. Not long after, the railway arrived, and in 1888 a new, more efficient turbine gave the mill a half-century of life as a small-scale producer of animal feed. Only after World War II, when modern economies of scale put watermills out of business all over the country, did Gants cease to be a profitable enterprise.
It remains a fully functioning mill, however, and I took advantage of one of the regular open days to take a guided tour with Brian Shingler, the current owner, whose parents bought Gants Mill in 1949.
In tune with changing times, the mill now relies on tourism for most of its revenue, but Shingler introduces himself as “the miller,” and he does indeed continue to grind barley for animal feed. The interior of the building is crooked and dusty, and when the miller turns the giant wheel that opens a valve below us and sends water rushing to drive the Victorian turbine the whole place begins to rumble and shake. Dust fills the air as the belts and shafts connecting the turbine to the millstones on the floor above us grumble into life. After a minute or two, in a wonderful display of simple but effective engineering, coarse ground barley begins to flow down the antique wooden chutes above us, to fall into coarse hessian sacks.
But the demonstration is not over yet. After closing the valve, Shingler goes over to a high-tech control panel on the wall and flicks a switch. Now the water is forced along a different pipe, and a second turbine comes into play, only this one, installed in 2003, is connected to a generator. On the control panel, revolving numbers tell us that electricity is now flowing into the National Grid.
Once again, Gants Mill has responded to a new government policy, in this case a commitment to producing 10 percent of Britain’s energy by renewable means by 2010. The resulting grants and tax breaks encouraged a flowering of technological invention that may one day be seen as the start of an energy revolution, and when Shingler brought together a dozen Somerset mill owners to study the feasibility of installing hydropower equipment, the results were positive. Now Gants Mill generates 30,000 kwh per year, enough to power about 10 households.
This is just the beginning. Around Britain there are more than 20,000 functioning or salvageable watermills, and word is gradually spreading among their owners. In Somerset alone, work is progressing at more than a dozen sites, each one, like Gants, rich both in history and potential and possessed of a unique sense of place. 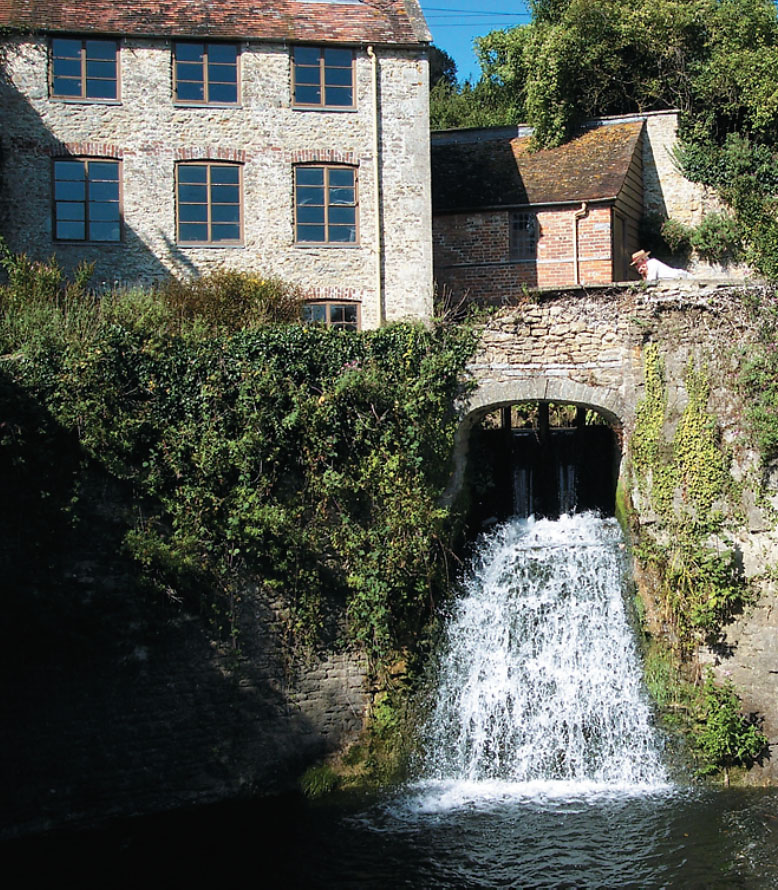 Down in Somerset, Gants Mill is one of a dozen such ancient Saxon watermills that have adapted their old technology over the years to new economic demands. They still grind corn, but generate electricity as well.[/caption]

Hinton Mill is supplied with water from the River Yeo via a tunnel 1,500 feet long, dug out of the rock in the 18th century, while Carey’s Mill near Martock functioned as a snuff mill before becoming part of the well-known Parrett Works. At Tellisford Mill on the fast-flowing River Frome, the 21st-century miller has installed generating equipment powerful enough to supply the whole village.
When the new machinery was being installed at Gants Mill, a stone was found in the medieval foundations with the letters “R En” carved into it: the mark, possibly, of Robert Edwyne, the miller before John Le Gaunt. Now, as it did then, the watermill faces a long and productive future. 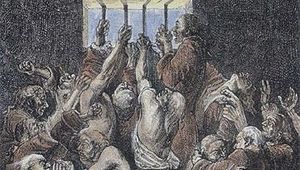