Who was Alfred The Great, King of Wessex? 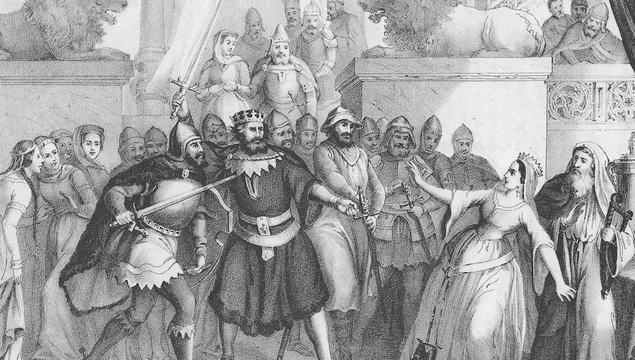 He was one of the Empire's greatest rulers, but who exactly was Alfred The Great and how did he win the Battle of Ethandun?

Of the many distinguished figures in mankind's recorded history to have the title 'Great' accorded them, posterity has allowed a mere handful to retain it. Alfred, England's darling for more than a thousand years, had 'The Great' bestowed upon him in medieval times by the English nation proud of their ancestor. Alfred had a diminutive and isolated stage on which to perform, compared to the likes of Alexander or Peter. Alfred, when he became King of the West Saxons, was the monarch of Wessex, a wedge of southern England between the Thames Valley and the English Channel.

Wessex, a prosperous land of scattered farmsteads and hamlets, seemed doomed to annihilation at the hand of marauding armies of piratical Vikings, heathen warriors that had already devastated Europe and laid waste to England's midland and northern kingdom. But Alfred was to prove of a different mettle than his unfortunate neighbors. Not only was he a canny and tireless campaigner - it is by his battlefield honors that many historians know him best - he was also a man of vision, learning, and a great statesman. These qualities saved a nation and earned for Alfred the lasting title 'The Great' despite having only a relatively minor role in the long play of history.

Who was Alfred The Great?

Legend has it that Alfred was directly descended from Wodin, the Nordic God of victory. History tells a more prosaic tale. Despite his larger-than-life attributes, he was a mere mortal born in 849, or thereabouts, into the House of Cerdic. This was a royal house, to be sure, but subservient to the neighboring kingdom of Mercia until the closing years of his father Ethelwulf's reign. 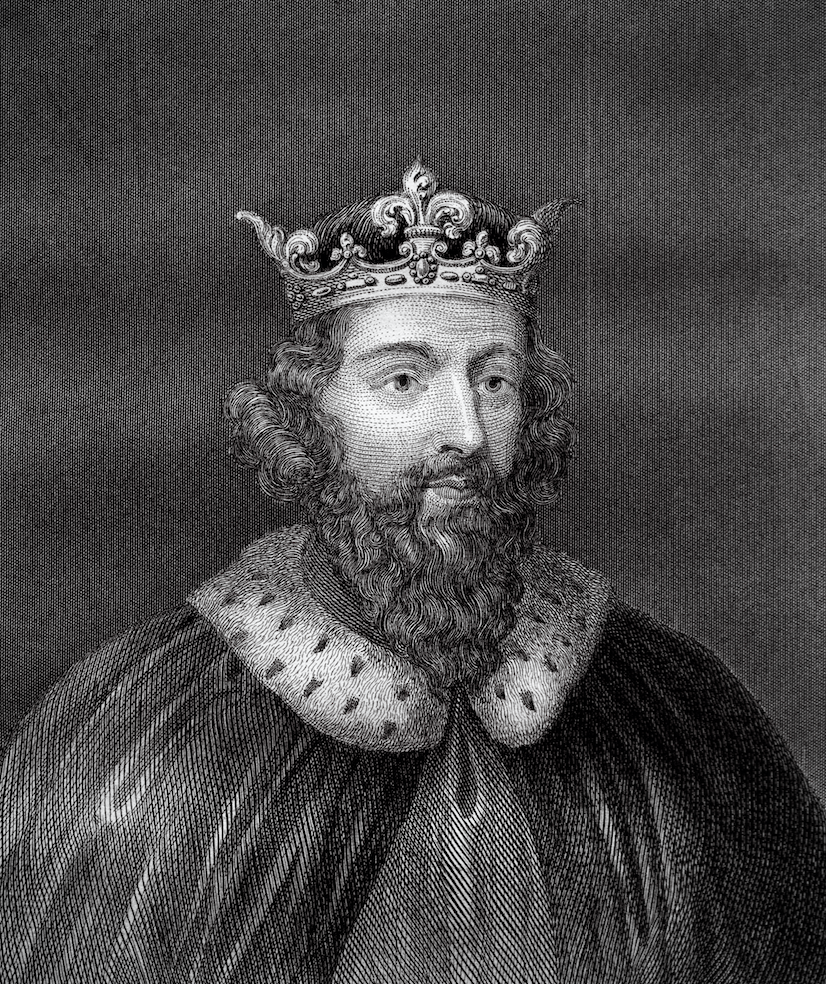 "Portrait of King Alfred the great ( 849-899)From ancient coin,engraving and publishing (1800s) in history of England.

His birthplace was a palace or vill that lay at the foot of the Berkshire Downs close by what is now Wantage. The vill here, Wessex kings had several vills at various locations, has vanished without a trace, but we can suppose that it was little more than a grandiose wooden hall with a scattered community of farm buildings. Ill health marred Alfred's childhood. The youngest of four sons, he had little prospect of taking on the burden of ruling Wessex, so he was allowed to pursue his love of learning, a peculiar pastime for a Saxon atheling that must have earned him some derision from his elder brothers.

Read more: Who was Eleanor of Aquitaine?

One of the many stories that illustrate Alfred's aptitude tells of how his mother, Osburh, showed her sons a beautifully illuminated book of Saxon poetry and promised to make a gift of it to the first of them to read it. Alfred found a tutor, learned to read it aloud, and won the rare book when he was only six years old.

King Ethelwulf was a devout Christian and is believed to have been a monk, pursuing a life of study at Winchester's monastery while Alfred's grandfather reigned. Their shared love of knowledge must have created a close bond between father and his youngest son, and Alfred accompanied Ethelwulf on a pilgrimage to Rome, an arduous journey taking two years.

Rome was still an awe-inspiring city despite the ravages of repeated sackings by barbarian hordes. The huge diplomatic center of Western Europe would have made a huge impression on the boy Alfred. Known as a modest man, he must have been acutely aware of his own lack of learning and seen how important literate lieutenants were to an effective government.

Alfred The Great's rise to power

The Church of Rome wielded immense power and its influence extended to almost every aspect of Saxon life. It also had a near-monopoly on the acquisition of knowledge as its official language. Latin, could be read and spoken only by church officials and understood by a mere handful of Wessex clergy. This awareness of the acute lack of Saxon books probably led his to have written a series of histories,  each compiled in a different monastery, each added to year-on-year-that have come to be known as the Anglo-Saxon Chronicles. Much of it is beautifully illustrated and it is often regarded as Alfred's greatest achievement. But one of Alfred's greatest gifts to posterity was the translation of a collection of great Latin works into his native Saxon tongue.

But we must not get the impression that the young Alfred was a weak and sickly lad, forced by ill-health to bury his head in books and set apart from his peers. We do know that, whatever his affliction was, he led a vigorous life as befitted a Wessex atheling. Alfred's love of hunting was renowned and his skill as a warrior is testified in his successes against the Danes. And, in an age when the nobility treated their subjects as family possessions, Alfred emerges as a generous and affable monarch whose Christian ideals led him to believe that true Christian kingship was to have a genuine responsibility towards his country,  a task entrusted to him by God. In this, he laid the foundations of a code that was embodied in the English monarchy for a thousand years. Such a visionary approach to monarchy was in stark contrast to continental rulers who were often barbaric in their treatment of subject and foe alike.

When Alfred ascended the throne in 871 he succeeded the last of three elder brothers who, between them, had barely ruled for a decade, characterized by defeat at the hands of increasingly powerful Danish armies. Amid these defeats, Alfred won a glorious victory at Uffington, not far from his birthplace, just months before he became king. He moved decisively to meet a huge Danish army advancing east, and he routed them. But the peace he won was fragile and one of his first acts as king was to ensure it by paying the Danes to leave. Like an ill-wind, they always returned and Wessex enjoyed only a brief lull before the inevitable storm broke upon them again.

Two key factors gave the Danes an immense advantage. One was their command of the sea. The other was the undependable nature of the Saxon armies. Comprised mostly of farmers, they had a habit of dispersing when crops needed tending and immediate threats were parried. Alfred used the time he had bought well. While the Danes busied themselves with easier prey in the north, Alfred reorganized his tattered field army and made good Saxon's other great weakness, their lack of ships to meet the sea-heathens before they landed, by building the first English navy. 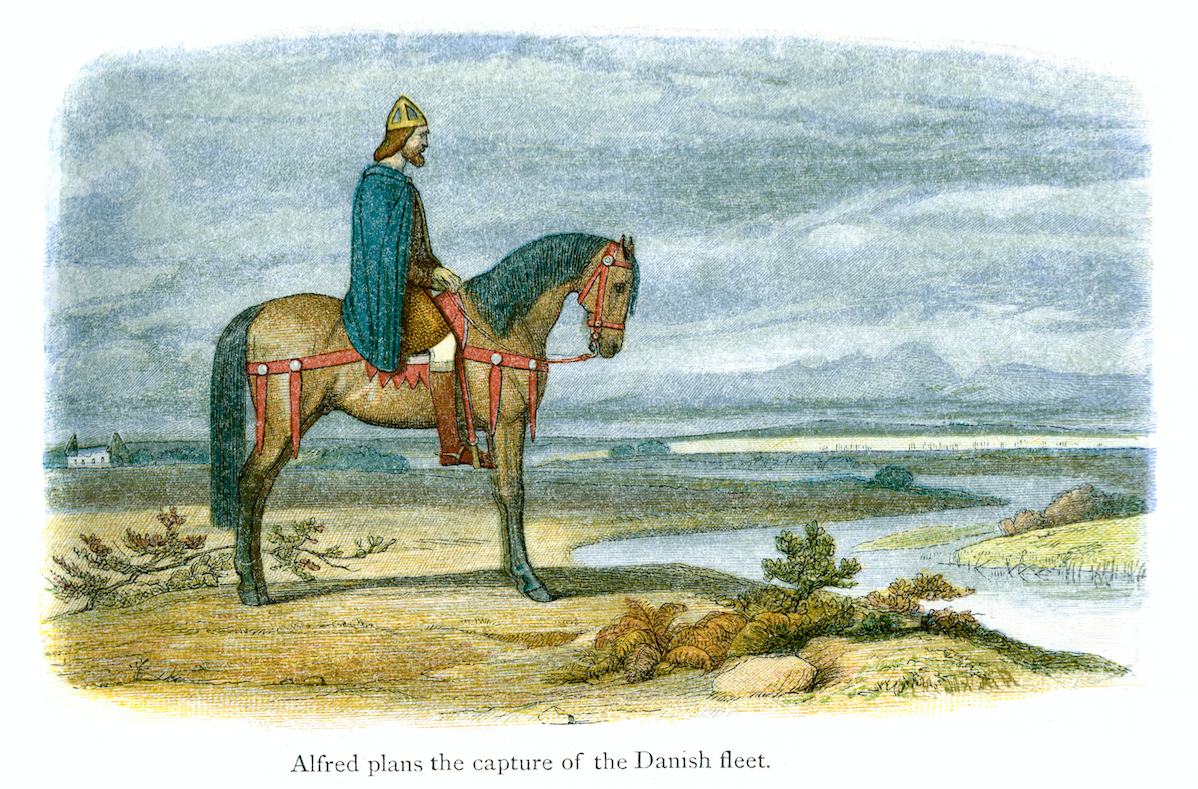 King Alfred and the Danish fleet

Alfred The Geat at War

But Alfred's energetic and revolutionary re-organization proved ineffective against the greed and determination of the Danes' massive force under King Guthrum and The Great Army. After a series of inconclusive forays the Danes, smarting from stubborn Saxon resistance made peace and retreated, only to strike back almost immediately. Together with a Danish fleet ravaging the south coast they penetrated deep into Wessex, seizing the royal vill near Chippenham and laying waste to the countryside. In the face of such overwhelming odds, the Saxon resistance crumbled away and Alfred barely escaped with his life.

His people must have despaired and yet, when Alfred's cause seemed utterly lost, they still remained loyal to their tenacious monarch. From his island fastness of Burrow Mump, deep in the Sedgemoor marshes near Athelney, Alfred called on his people to rally around the golden dragon standard of Wessex. Alfred met his army near Kingston Deverill by the Wylie River. From there they hurried north to meet Guthrum's heathen army by the northern edge of Salisbury Plain between the iron-age fort of Bratton and Edington village. Sweeping down steep-sided gullies in a packed column, the Saxons split the Danish horde asunder and drove them pell-mell back to their stockade at Chippenham. A brief siege ended in probably the most important victory ever won on British soil, known as the Battle of Ethandun.

Read more: The armor and weaponry of the Normans

In victory, Alfred showed true statesmanship. When avenging the devastation of repeated Danish attacks must have seemed fully justified he took the defeated Danish king to a vill at the mouth of Cheddar Gorge and entertained him royally. Here was signed the Treaty of Wedmore. Alfred, realizing that lasting peace was only possible by accepting the Danish presence, suggested they occupy East Anglia. Guthrum acceded and even accepted the Christian faith by being baptized at the marsh-bound church of Aller, close by Alfred's former fastness.

The Danes' defeat secured Wessex for Alfred but, with his country in squalor and ruin, Alfred's genius as a ruler really emerged in the uneasy peace that followed.

From his capital at Winchester, he introduced a wealth of imaginative reforms that have left us a rich heritage. His military innovations included splitting his field army, or fyrd, into a bi-partied system. One-half of the levies serving until their comrades had left their crops to relieve them. Alfred also enlarged the English fleet, manned it with Frisian sailor who could match the Viking pirates and thereby gained the honor of being the founder of the Royal Navy. But more importantly, he fortified existing villages and created new ones at strategic sites. Many of these burhs are still with us, Shaftesbury, Chichester, Exeter, Oxford, London and by making the surrounding populous responsible for a burh's garrison he endured their continued existence.