The battle of the three suns - Mortimer's Cross 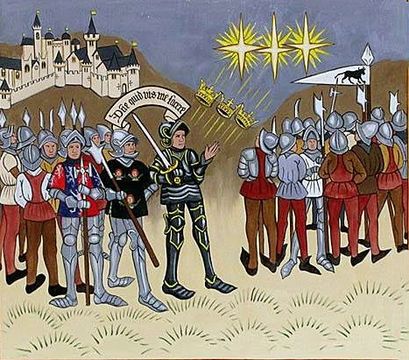 The three suns: The battle of Mortimer's Cross.British Library

It's a quiet place today, this Mortimer's Cross. Few clues remain to indicate that on a bitter cold Tuesday, Feb 3, 1461, this sleepy hollow shook to the sounds of war and ferocious battle.

It's a quiet place today, this Mortimer's Cross. It rests in a rural corner of Herefordshire hung with Constable skies that soar into neighbouring Wales. The surrounding hills slope gently down to open fields, and the River Lugg gurgles its way along as ever.

Few clues remain to indicate that on a bitter cold Tuesday, 3rd February in the year 1461, this sleepy hollow shook to the sounds of war and ferocious battle. Blood flowed in these fields, and of the almost 4,000 who died this day, many are buried within the 'clamp', a mound overlooking the battlefield. Edward Mortimer, the 19-year-old Earl of March and a Prince of the Plantagenet line cut his teeth in this battle and his fortunes on that day propelled him to the throne of England.

No one was better equipped for kingship than Edward. Unusually tall, strong, and athletic, he impressed those who met him with his openness, charm, and friendly generosity. His contemporaries unanimously extolled his good looks. He also possessed great courage, audacity, and military skill, as well as a determination to prove himself a worthy successor to his father, Richard, Duke of York, recently slain at the Battle of Wakefield.

England in the 1400s was awash with conflict, intrigue, and disharmony. Henry VI's pious but weak rule led to many bitter squabbles over the succession, culminating in the Wars of the Roses. After Henry lapsed into insanity, his Queen, Margaret of Anjou, became the main Lancastrian protagonist in the struggles with the House of York for the coveted royal crown. She ordered Jasper Tudor, his father the Earl of Pembroke, and James Butler, Earl of Ormond and Wiltshire (who brought his own French and Irish mercenaries) to march from South Wales and put down the Yorkists based in the Marches at Ludlow and Wigmore.

Margaret made a great mistake in underestimating Edward. Instead of a rash strike of revenge at his enemies, Edward took counsel at Shrewsbury, where he found little support. Despite his grief over the loss of his father, Edward kept a very cool head, as he always did in times of danger. No doubt he wanted to avenge his father's death, but an assault on the Queen's great northern army would have been foolhardy. Instead, he turned his attention south, giving priority to stopping Jasper's advance. Edward and his Marcher counsellors probably reasoned that they could never leave the Marches, the cornerstone of Yorkist power, unguarded until they dealt with Jasper Tudor.

Tudor could not begin his march northwards until Wiltshire and the foreign contingents arrived. The delay was very much to Edward's advantage. He sat and waited in comfort at Ludlow and Wigmore, the ancestral home of the Mortimers, where there were plenty of provisions. From this safe haven, he watched the situation develop and planned accordingly.

This green border region was friendly ground for the Yorkists. Richard Croft, Edward's friend and a trusted lieutenant, resided in his family castle only two miles from the battlefield. He and his retainers had every reason to fight hard. Croft and the others who gathered around Edward comprised a formidable body of men. Mostly from the southern Marches, these soldiers had experience in France, Ireland, Wales, and the Scottish Marches; they also had inherited centuries of military tradition in the defence of the middle March and knew how to meet an advancing enemy on the most favourable terms.

Edward and his staff, conveniently housed at Croft Castle, drew up detailed battle plans and selected sites where they might engage the Lancastrians with the greatest hope of success. The Earl's agents provided him with much information on Jasper's movements, indicating that he was advancing along the Beacon route, pushing north-east. The bleak winter of 1461 compelled Jasper to march along the valley floors as he headed northward. A Lancastrian attack on Wigmore and Ludlow appeared certain. In that case, Edward's war council decided, Mortimer's Cross would be the ideal place to meet them.

Now as then, the site is a remarkable one. Two valleys cut through the limestone escarpment, which rises gently from the north Herefordshire plain and meet there at right angles. The River Lugg flows through the valley a mile to the north at Aymestry. It then runs east of and parallel to the old Roman road (today the A4110), which at Mortimer's Cross intersects the newer road from Ludlow to Presteigne (the B4362).

Behind the Yorkist positions, Wigmore Castle offered a secure refuge should the battle go badly. The Lugg, swollen with winter rains, protected Edward's left flank. Beyond, Croft Castle held supplies and men in reserve. On the right, steep slopes, heavily wooded in those days, offered perfect concealment for archers waiting to deliver a storm of arrows against the left flank of an enemy force advancing from the south.

No less than Edward, Jasper Tudor was a brave, tenacious, and resourceful man. His force had to march more than 100 miles through unfamiliar country, and in an equally obscure cause. Superstitious witnesses believed that even God opposed them in this moment in history. The authoritative Davie's Chronicle records that:

the Monday before the day of battle, . . . about 10 at the clock before noon, were seen 3 suns in the firmament shining full clear, were of the people had great marvel, and thereof were aghast. The noble Earl Edward them comforted and said, 'be of good comfort and dread not; this is a good sign, for these three suns betoken the Father, the Son, and the Holy Ghost, and therefore let us have good heart, and in the name of Almighty God go we against our enemies.'

Each commander split his army into three elements or 'battles': the vanguard, the centre, and rear. As was customary at that time, each battle engaged in turn. Jasper personally led the Lancastrian vanguard against the weaker right-wing of Edward's army, but he failed to observe the lethal Yorkist archers on the surrounding slopes and paid a heavy toll. A rout ensued, taking the battle northwards along the old Roman road to Aymestey.

Both centre battles were then engaged. Edward led as he always did, on foot and in the midst of the worst fighting. With fire in his throat and revenge in his heart, his must have been a frightening figure to observe. The battle established his fame as a warrior as well as a skilful commander. Butler led the Lancastrian charge but fled the heat of battle. A tough and unyielding struggle ensued with neither side giving ground. The Marcher billmen hacked away at the leaderless French and Irish.

The battle lasted all morning and into the afternoon. A Lancastrian flanking ploy failed and the troops retreated south toward Kingsland. Others drowned trying to cross the freezing waters of the Lugg or were ruthlessly cut down by Edward's reserves lying in wait on the opposite bank. Jasper Tudor faced a hopeless cause. He mounted a horse and fled the field to seek refuge in his native Wales. The victory was Edward's. As was to be his custom in future battles, he urged his men to capture the leaders and spare the regular soldiers of the defeated Lancastrian army. Only four months later, the brave young Earl was crowned King Edward IV.