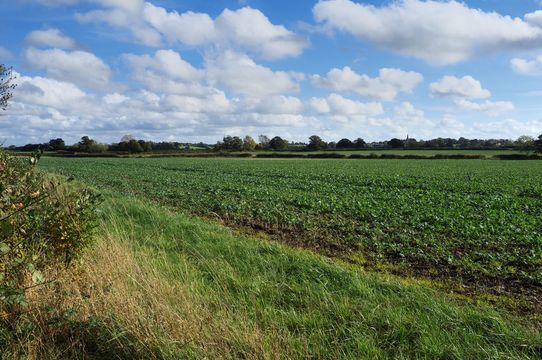 In 1934 Lord Raglan observed, “Harold fell on the fields of Hastings, Simon de Montfort at Evesham, Richard III at Bosworth Field; their deaths marked epochs in our history, yet who knows the spot where they fell?”

Raglan had a particularly good point about Bosworth Field. That battle had marked the start of the Tudor dynasty and the end of the medieval era; yet not only did no one know where Richard III had fallen, no one could place Bosworth Field within 50 miles—until now.

A team of British archaeologists have definitively located the exact point where Richard III fell on August 22, 1485, taking the last remnants of English feudalism with him. Sponsored by The Battlefields Trust and Leicestershire County Council’s Museum Services, digs in the low fields below Ambion Hill (15 miles west of Leicester) have uncovered battlefield artifacts, including a concentration of cannonballs and lead shot—unexpected for a battle that was formerly believed to have taken place before gunpowder was widely used.

The previous best guess as Bosworth Field’s location had been two miles closer to that hill, where Leicestershire County’s Bosworth Battlefield Park has commemorated the engagement since 1974. Many scholars had disputed this, however, and when the Guardian announced the new results in 2009, its reporter gleefully noted that the site was “surrounded by school parties still studying at least four wrong locations.”

Richard Knox, Curator of Bosworth Field (and a member of the dig team) notes, “That was a relief for us, that we missed it by so little”—for the battlefield site is quite a park, with a large museum and outdoor displays. Nowadays the museum exhibits include the new battlefield finds, including those cannonballs and a boar emblem fallen from the armor of Richard’s household knights. As a plus, the museum site can still make a claim to be the place where Richard’s troops encamped before the battle. While Richard slept in a nearby inn the night before, he may well have had his last drink from a hilltop spring, marked out by local tradition and memorialized by a village doctor in 1813.

The ruins of Kirby Muxloe Castle, outside of Leicester, remain much as they were abandoned when its builder, Lord Hastings, was summarily executed by King Richard III.

The Fields of Bosworth

Richard III wasn’t a little, spindly hunchback. His recently recovered remains show that he did suffer from scoliosis, a spine curved from side to side, but contemporary descriptions show him as tall (for the era, at 5 foot 8 inches), strong, broad-shouldered, and masterful at close combat. Battlefield eyewitnesses state that, in his final hour of life, unhorsed and mired in muck, he fought bravely and without fear, facing his end as a warrior should. However, when it comes to the general tenor of Richard’s two-year reign, Shakespeare was spot-on; Richard was a straight-out monster.

As Duke of Gloucester Richard had been one of the most loyal ministers of the old King, his brother Edward IV, and as such was appointed Lord Protector of Edward’s 12-year-old son, Edward V, upon Edward IV’s death in April 1483. Richard combined with Edward IV’s other most loyal minister, the Lord Chamberlain William Hastings, to secure Edward V’s independence from his ambitious in-laws.

Then, in June, Richard betrayed Hastings, executed him without trial, had Edward V and his brother declared bastards and confined to the Tower of London (where they simply disappeared), and had himself crowned King. This murderous coup shocked the ruling classes, and Richard faced two rebellions. He won the first and lost the second. The victor was Henry Tudor of Wales, who became Henry VII, founder of the Tudor dynasty, literally crowned on Bosworth Field when Richard’s fallen circlet was recovered.

Kings and battles, however, are lagging indicators. Changes had been in store for a long time, and England was charging into a capitalist future whether or not Richard and Henry slugged it out in a Leicestershire bog. A century before, disastrous climate cooling (medieval England had been as warm as modern England) had led to massive crop losses and starvation, driving indoors serfs and nobles alike. This housing, whether hovel or castle, was infested with rats and their fleas—and these spread the Black Death, depopulating the countryside by a third.

The feudal system of tenure, which bound farmers to their land, broke up; there just weren’t enough farmers, and the survivors found they could abandon a recalcitrant lord and bargain their labor for cash elsewhere. But even that was a late occurrence. Two centuries before, England had officially abandoned the feudal system of holding land on behalf of the King, in favor of the modern one of being able to sell land outright to anyone and paying the King taxes. In fact, the dynastic strife that shook much of the 15th century was between great families engorged on vast, purchased estates.

Consider William Hastings, the old Lord Chamberlain who Richard murdered in his June coup. By coincidence, Hastings was a local Leicestershire boy whose estates surrounded the battlefield to the north and east, and his nearby Kirby Muxloe Castle wonderfully shows the rise of the late medieval lord. Hastings was not born to the nobility, but rather was the son of a knight, and would class as gentry in a later age. When Edward IV appointed him Lord Chamberlain, he also elevated him to the peerage as Baron Hastings, and Hastings became exceedingly wealthy.

Climb the style into the rape field and follow the path to the spot of Richard III’s death.

In 1480 Hastings gained permission to build a moated castle just outside Leicester. By this late period, however, the military appurtenances had become a mere display of power, too weak for battle and unneeded for protection in a placid countryside, serving only to indicate that you were well-placed enough to get permission to crenellate. Hastings built it with brick, the latest in modern architectural fashion, and added a couple of (non-functioning) gun ports just to show how up-to-date he was. Hastings was the greatest minister of his age, and if it had been completed this manor would have symbolized the pinnacle of power and money. Yet, compared with the Renaissance monstrosities that would crop up under the Tudors in a century or so, it is surprisingly modest. Today, it is one of the region’s most beautiful ruins, its rich red walls (never completed) reflected in the still waters of the moat. Local fishermen line the moat, whose resources they share with the local waterfowl.

So Where’s That Battlefield?

Got your GPS ready? The actual, real Bosworth Field is 2.5 miles from the Battlefield Park, at 52.579137,-1.440287. Without GPS, and starting at the Battlefield Park: Head west into Shenton (a canal crosses overhead in an aqueduct); at the T-intersection at the far end of the village turn left; at the end of the lane turn left; park at the footpath in 0.4 miles; follow the footpath south, uphill, for 0.2 miles.

For a more realistic look at a period home travel to Donnington le Heath, 10 miles north of the battlefield, where Leicestershire Museum Services runs a restored medieval manor house. It’s a plain stone building with two stories and a wing, built two centuries before Bosworth Field and much altered in the five centuries since. It would have originally been the home of a knight, who would have run three to six farms for a higher lord, keeping part of the proceeds in exchange for military service and goods.

This was a classic feudal structure, centered on a hall where the knight and his retainers would live, eat and sleep. Over the centuries, the knights were replaced by farmers, and the house was altered (around 1608) to run as a farm instead of a feudal military stead. Today it has period furnishings and is surrounded by modest, well-kept gardens of the sort that a successful tenant farmer might create. Its possessions include a bedstead that might have been slept in by Richard III on the night before the battle, being the right age and style to have been used in the nearby inn where Richard spent his last night.

The 15th-century farmlands around manors such as Donnington would not have looked anything like modern, or even 19th-century, countryside. The farmers of Donnington and Bosworth shared vast open fields, heavily cultivated in long rows that surrounded their villages on all sides and stretched to the horizon. Unlike today there were no forests at all, just wood-lots barely big enough to produce firewood and timber for the humans and mast (acorns) for their pigs. Farmers among the rows on Ambion Hill would have been able to see and hear the din of the battle, but would have not been able to guess what it was about. Within a century this method of agriculture disappeared from here as well, replaced by the familiar hedged fields and improved lands. The marshes were drained by 1600 and their very location lost—and with it, the location of the battlefield.

The manor at Donnington le Heath would have supported a knight.

The battle itself was fairly straightforward. Henry Tudor advanced from Wales along a Roman road known as Fenn Lane, and Richard III set up along the top of Ambion Hill to stop him. Bookmakers would have heavily favored Richard, but one of Richard’s allied armies did not fight and another switched sides. Richard, like many tyrants, loved modern super-weapons and trained an array of cannons against his enemy. This, however, merely moved the charge to one side. At a crucial point, Henry charged with his personal troops and Richard, seeing Henry exposed, charged directly, evidently not realizing that the exposed flank was in fact a bog. Richard and his troops were mired. Then, one of his allies turned traitor to attack his flank. That ended it.

You can visit the very spot where Richard died. While it is on private land, a public footpath leads to it through a field of rape seed. On a spring day they are covered in bright yellow blooms, such that a walk through them will leave you coated in fragrant pollen. The trail leads to a tiny wood along an entrenched stream, the drained remnants of the mire, with a single board forming a bridge over it. Step onto the bridge; this is where Richard III died, and with him the medieval world.