The history of Buckingham Palace 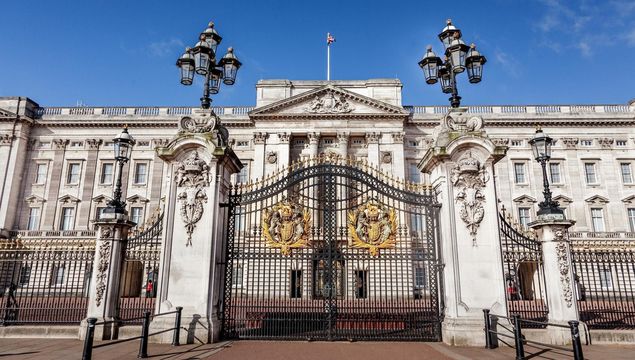 The English monarchy has lived at Buckingham Palace since the reign of Queen Victoria, but how much do you know about its history?

Buckingham Palace presents an inscrutable facade. It possesses a composite aura of authority, much as the White House does in America. The edifice has come to embody the voice of royalty; statements issued to the world from behind these walls begin with the words 'Buckingham Palace announced today. . . .'

In addition to its role as a palace and Queen Elizabeth II's official London home, it also serves as the Sovereign's office, where she entertains Heads of State, receives citizens, and holds investitures. During the present reign, Presidents Eisenhower, Kennedy, Nixon, Reagan, Bush, and Clinton have been entertained here, and the Duchess of Windsor stayed for several days following the Duke's death in 1972. 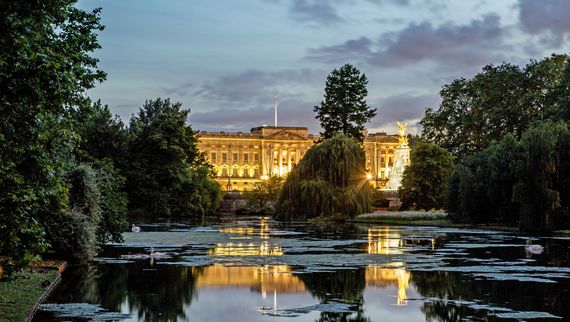 Henry VIII first chose this part of London as the home of royalty when he settled in Cardinal Wolsey's Palace, Whitehall. Later, he moved to the present St. James's Palace and drained the marshy land to the south, creating St. James's Park. From the River Tyburn that ran through Green Park, he created the lakes that now adorn the grounds of Buckingham Palace and St. James's Park. It is remarkable, centuries later, to find these 40 acres of still-undeveloped land in the centre of a thriving city.

Lord Goring of Hurstpierpoint built a house, the forerunner to the present palace, in about 1640. It passed through various hands before coming into the possession of the Duke of Buckingham, a suitor of Queen Anne. Here, he built Buckingham House in 1703, generally deemed the finest house in London, with the mall stretching before it through St. James's Park. After his death in 1731, George II approached the Duke's widow with an offer to buy it, but it was George III who finally closed the deal in 1762, paying £28,000. The King, one of the greatest book collectors in the history of England, created a fine library in the house.

In 1775, George gave Buckingham House to Queen Charlotte and thereafter it became known as 'The Queen's House'. George III spent his twilight years at Windsor Castle, suffering from the well-known effects of his porphyria.

George IV contributed greatly to London's architectural and cultural glory, and like so many enterprising Kings in whose legacy we now rejoice, his contemporaries deemed him profligate and a worry to the Exchequer. He employed the architect John Nash to repair and improve the house, which became Buckingham Palace in 1825. His additions included the Marble Arch, built as the ceremonial entrance to the Palace, which has since been moved to its present site at the northern end of Park Lane. George IV collected many of the finest treasures in the Palace, notably the fabulous Table of the Grand Commanders, commissioned by Napoleon and made of a single piece of Sèvres porcelain, inlaid with portraits of Alexander the Great and others.

Sir John Soane also submitted plans for remodelling Buckingham House. Sir John would have given Londoners a version of the Palace of Versailles, with great arches, columns, plinths, and inner courtyards. Instead, the Palace evolved gradually, first as an eastern facade with south and north wings, and then later with a westerly facade constructed (not very satisfactorily) in the reign of Queen Victoria. Neither George IV nor William IV ever lived in the new palace; William IV took possession on 5th May 1837, only a few weeks before he died. Queen Victoria was the first monarch actually to live there as Queen. 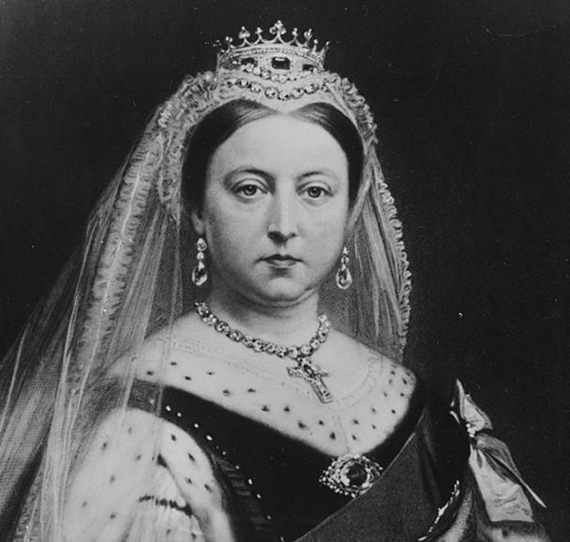 Queen Victoria revelled in her new home, moving there from Kensington Palace. She hosted balls and receptions and from Buckingham Palace, she progressed to Westminster Abbey for her Coronation in 1838. After she married Prince Albert of Saxe-Coburg in 1840, she lived there with her expanding family until the Prince Consort's death in 1861. Thereafter the place entered a state of decline and for some years looked increasingly derelict and in need of repair.

Only in the latter part of her reign did Queen Victoria make occasional appearances at the Palace, notably for her two Jubilees in 1887 and 1897. Princess Alice (Countess of Athlone) appeared on the balcony both in 1887 for Queen Victoria's Golden Jubilee and again in 1977 for the present Queen's Silver Jubilee. Alice, Queen Victoria's granddaughter, was too young to take part in the 1887 procession, but not too old to do so in 1977.

During Victoria's absence, the Palace sometimes housed foreign dignitaries. In 1873, Nassered-Din, Shah of Persia, stayed there. His Imperial Majesty had unconventional personal habits: eschewing the dining-room table, he ate roast lamb straight from the floor; and he once organized a boxing match in the Palace gardens. It is even said that the bones of one of his staff, executed with a bowstring, lie beneath the immaculate lawn.

During Edward VII's reign, the Palace provided the setting for great balls and evening courts, though the King called it 'the Sepulchre.' Sir Compton Mackenzie noted: 'It was not until April 1902 that the Palace was ready for the residence of the King and Queen and even now we may reflect with awe on the perfume of that first cigar lighted in what had been Queen Victoria's private apartments'.

George V and Queen Mary made it very much their home, adding a new domestic touch. The First World War overshadowed the early years of their reign, but later Queen Mary, one of the Palace's great benefactors, undertook a considerable reorganization of the pictures and collections of china, reuniting separated pieces and making the Picture Gallery less crowded and easier to enjoy. George V spent many happy hours in the Stamp Room, and by 1936, the King had amassed a collection of 250,000 stamps in 325 large volumes.

Not all monarchs felt such affection for Buckingham Palace. Edward VIII hated the place and spent only a few nights there during his short reign. Nor was each stay without incident. George VI made it his headquarters during the Second World War, and it suffered bomb damage on more than one occasion. At the end of the War, the Palace played a part in the Nation's grateful celebrations, when, symbolically, the Royal Family gathered together on the balcony with Winston Churchill, the Prime Minister who had led the Nation during this traumatic period in history. 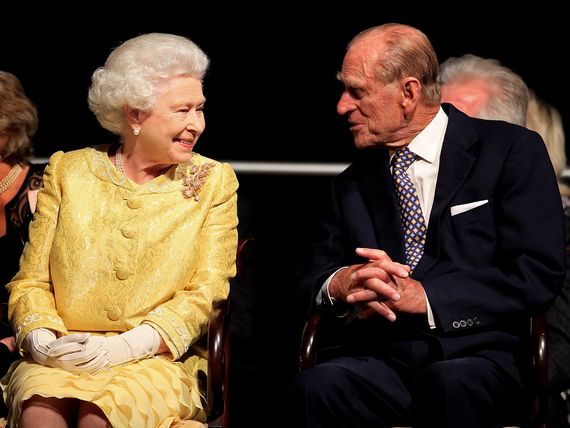 Since 1952 Buckingham Palace has been The Queen's working home. Visitors once could enter the Palace only by invitation, but this has changed somewhat during the present reign. The Royal Mews in Buckingham Palace Road opens its doors to visitors, who can see The Queen's carriages, horses, and the stables and Riding School, which are an essential part of daily life for this department of the Royal Household. The Queen's Gallery (on the site of a chapel destroyed by German bombs) opened in 1962 and has exhibited a succession of treasures from the Royal Collection.

The Queen also opened the State Rooms to visitors in the summer of 1993. In November of the previous year, fire badly damaged Windsor Castle, and though The Queen bore no official responsibility to pay for the repairs, she decided that one Royal residence should come to the assistance of another. Each summer when the Royal Family is at Balmoral, Buckingham Palace admits the public in an effort to raise 70 per cent of the money needed to repair the castle.

Visitors see the State Rooms where the Royal Family gathered for state banquets and family christenings; the settings for some of Cecil Beaton's fine portraits of The Queen, The Queen Mother, and Princess Margaret; and the Palace's extensive lawns, so reminiscent of the evening when, in 1762, Queen Charlotte had the entire grounds lit by thousands of coloured lamps and led King George III to the window to enjoy the full glory of his new home.

The Palace remains a private home to the Royal Family, but it is also a national treasure, a potent symbol to the British people of their own strength, continuity, and tradition. It is a highly visible part of British heritage just as the White House is a vital part of America's historic fabric. It was no accident that the Palace became a target for German bombs; if it had been destroyed, the Nation would have been dealt a heavy moral blow. Fortunately for us, it survived to open its doors on another era.