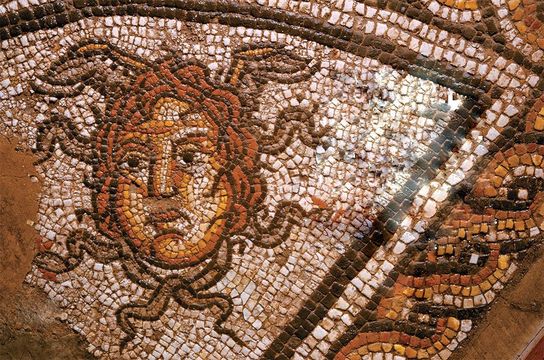 Medusa’s head is depicted in the Roman Dyer Street mosaic, reconstructed at the Corinium Museum at Cirencester.

The majority of Britain's mosaic masterpieces have been lost to the ages, but those that remain are absolutely stunning.

When Pablo Picasso commented that “art is not truth” but rather “a lie that makes us realize the truth,” one assumes he wasn’t musing about the artistic glories of late Roman Britain. Research during the past decade or so suggests, however, that he could have been. The last century of Roman rule saw an artistic flourish that, in intellectual terms, has arguably never been excelled.

Using visual metaphors, allegories and rich allusions, the artists of 4th-century Roman Britain portrayed what they saw as ultimate truth through the beauty and vigor of symbolic fiction. Picasso would have loved it. 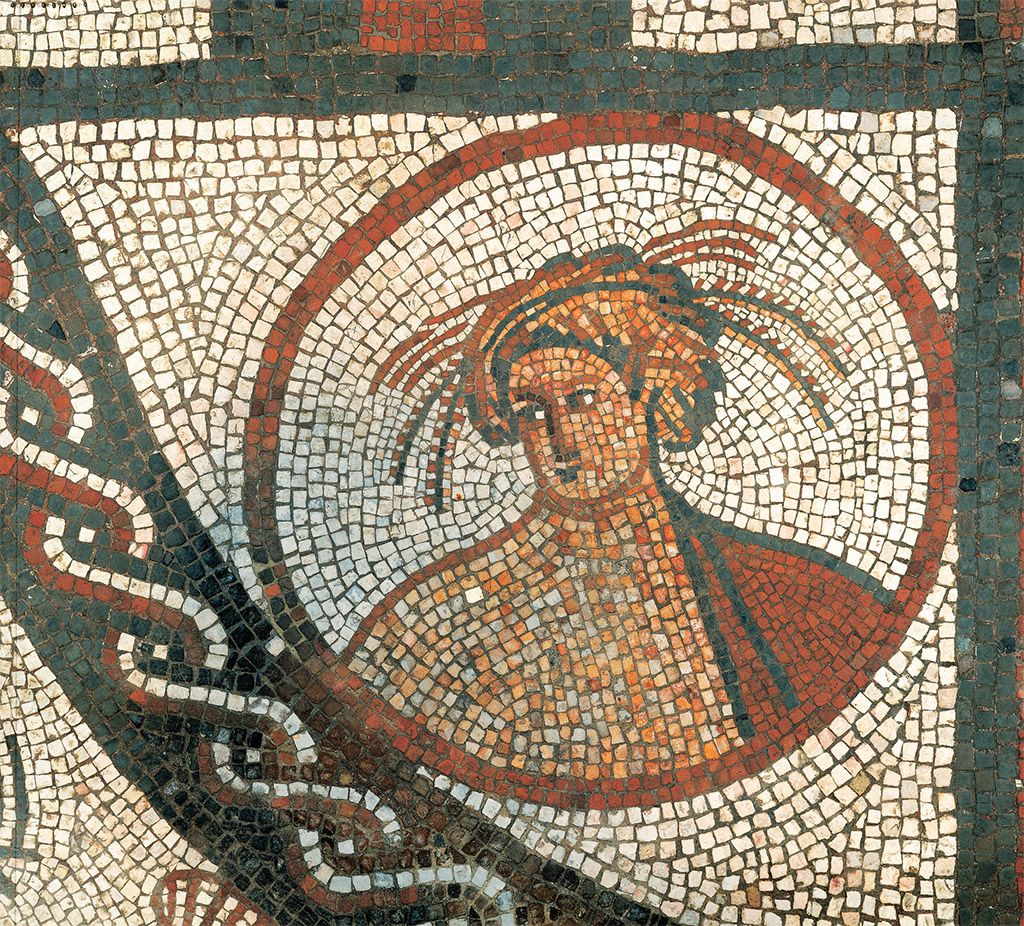 Another detail of the Lullingstone floor mosaic depicts the mythical figure of Summer wearing a garland of corn. ENGLISH HERITAGE

Like Europe in the first half of the 20th century, Britain 1,600 years earlier had been a place of massive intellectual ferment&msash;and, as in Picasso’s work in the 20th century—4th-century Romano-British art powerfully reflected that state of flux. While the artistic debate was mainly political in the 20th century, Roman Britain was engaged in an unparalleled variety of religious and philosophical debates in the 4th century. Those debates were reflected above all in the achievements of the mosaic artists who beautified the floors of rich and plush Romano-British country houses in what is now England. 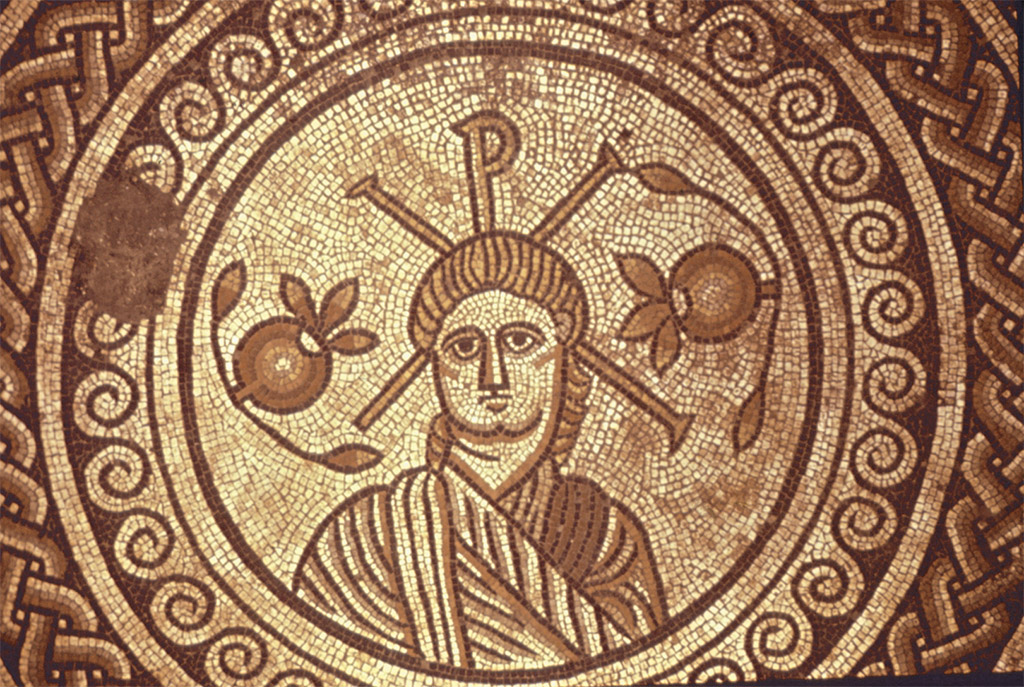 The 4th-century mosaic floors were the greatest artistic achievement of Roman Britain. Tragically, of the 2,000 or so Roman mosaics known to have existed, only 150 survive in a relatively complete state&msash;and only half of those are from the 4th century, the period of highest creative output. 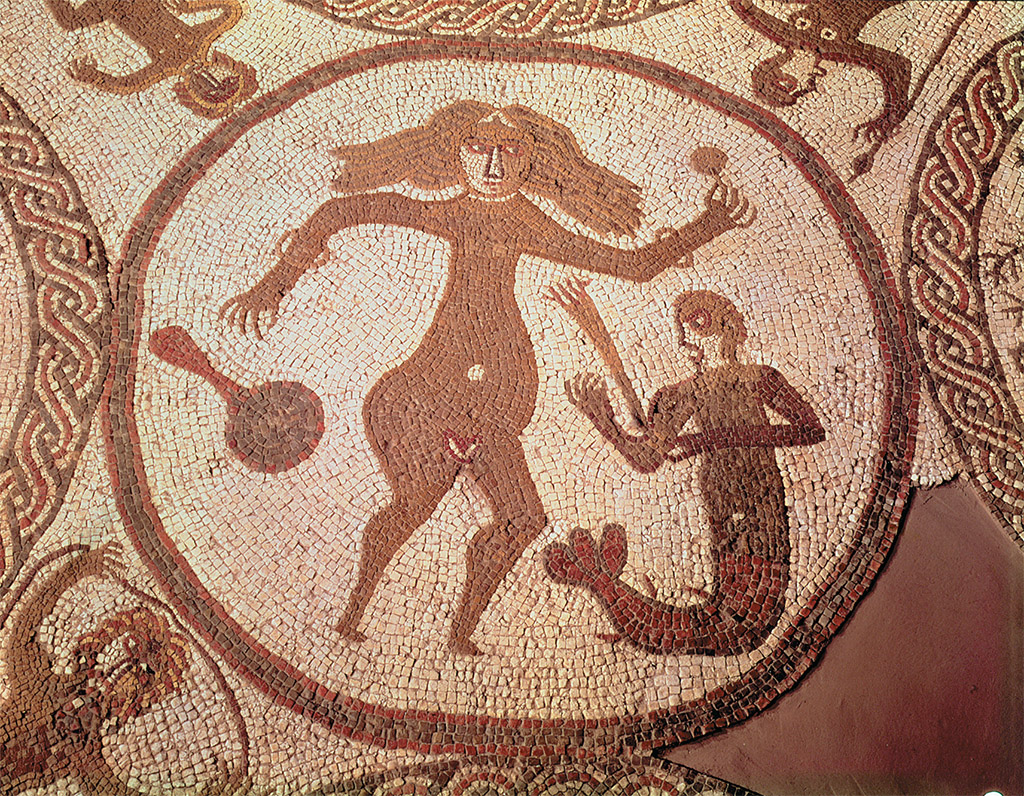 This circular mosaic from Hinton St. Mary, Dorset, depicts a figure of Christ in front of the universally recognized Chi Rho symbol. A detail of a nimbused Tyche or Fortuna, the goddess of fortune, discovered at Brantingham, East Yorkshire. An oval panel mosaic shows a merman paying homage to the goddess Venus, found in East Yorkshire and now on display in the Hull and East Riding Museum. Venus, the Roman goddess of love and beauty, is also the subject of another mosaic, discovered at Bignor Roman villa, on the Sussex coast. SHERIDAN/ANCIENT ART AND ARCHITECTURE COU.ECTION

THE MAJORITY OF Britain’s mosaic masterpieces have been either lost or destroyed, most of them in recent centuries. It is as if 90 percent of Rembrandts or Picassos had been largely or totally obliterated. However, the mosaics that remain are, in terms of their illustration of philosophical thought and symbolism, absolutely stunning.

The educated elite of 4th-century Britain lived in lavish country villas and commissioned artists to create elaborate mosaics that visually mirrored the shifting beliefs of the times. Britain’s late Roman mosaic masterpieces are therefore awash with allusions to both pagan mythology and Christian ideology. In addition, there were some cases where pagan mythology was even used to bring stories from the Old and New Testaments to life. In several mosaic works (from Hinton St. Mary, Dorset; and at Lullingstone, Kent), for example, spectacularly beautiful portrayals of Bellerophon (a half-human, half-divine son of a god) killing the Chimera (a firebreathing, multiheaded monster) are used to symbolize God’s destruction of evil. 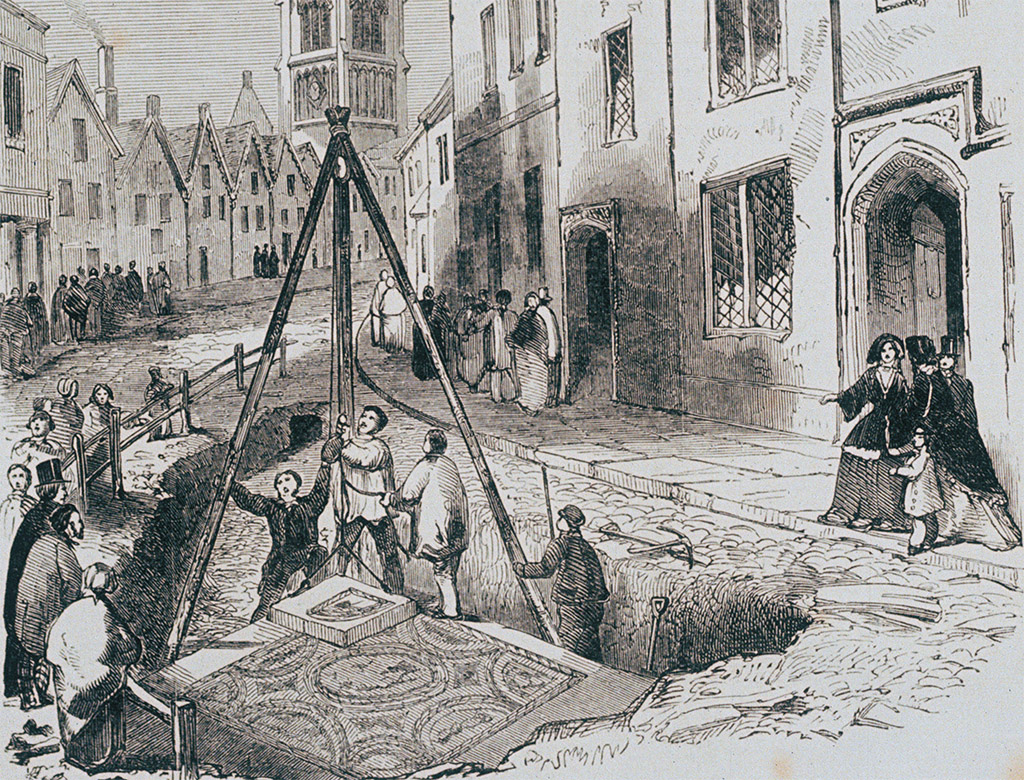 An engraving shows workmen uncovering a tessellated Roman pavement beneath Cirencesler’s streets circa 1849. Mosaic pavements such as this one can be seen al the town’s Corinium Museum. CORBIS

In mosaics such as these, pagan mythology portrays verses in three different parts of the Bible. The verses reveal that “the Lord, with His great and strong sword, will punish the crooked serpent and slay the dragon” (Isaiah 27), that the Lord “breaks the heads of the dragons” (Psalm 74), and that “now cometh salvation and the Kingdom of our God and the power of his Christ,” for that great dragon, that old serpent Satan is overcome “by the blood of the Lamb” (Revelation 12).

Another frequent pagan motif, the hunt, is used in at least one Romano-British Christian mosaic as a way of bringing to life a psalm regarded by Christians as a key prophecy of Christ. Verse 16 of Psalm 22 says: “For dogs have compassed me: the assembly of the wicked have enclosed me: they pierced my hands and my feet.” Romano-British artists used the hunted deer as an emblem of Christ approaching his passion-the dogs symbolizing those seeking his crucifixion.

The intellectual competition between the many religions was intense during the 4th century. In their missionary zeal for new adherents, the rival religious cults thought nothing of “borrowing” their opponents’ best ideas. The Christians and the Hellenistic cult of Orpheus, for instance, produced rich mosaics that feature Christ and Orpheus, respectively, each controlling-indeed imposing order upon-the forces of nature.

THE BRITISH MUSEUM owns a mosaic pavement from Dorset that portrays Christ surrounded by personifications of the Four Winds, reflecting the statement in the Gospels of Matthew, Mark and Luke that “He [Christ] commands even the winds and water and they obey him.” At Littlecote, in Wiltshire, Orpheus is shown controlling naturesymbolized by personifications of the Four Seasons-and in a now reburied masterpiece at Woodchester, in Gloucestershire, Orpheus is portrayed at the heart of nature, controlling the animal world.

It is on an island off England’s south coast, however, that one can see what is perhaps the most philosophically complex mosaic masterpiece from that era. Packed full of pictorial references to almost a dozen characters from Greek and other myths, this amazing mosaic at Brading on the Isle of Wight is dedicated to the twin concepts of sacrifice and salvation.

In the 4th century it was not just Christianity that was based on the idea that mankind could be saved through the death of a god. Salvation through divine or royal suffering was already an ancient and increasingly popular concept in the pagan world. The central panel of the Brading mosaic shows the severed head of Medusa, consort of Poseidon/Neptune, King of the Sea. In Greek mythology, human disease, a metaphor for human suffering, can only be defeated by the great god of healing, Asclepius, through the use of Medusa’s blood, shed at her decapitation. Medusa’s severed head is surrounded, in that mosaic, by four other panels, each containing pictorial references to other salvation-based stories.

IN PAGAN TRADITION, where the gods can be both good and bad-often at the same time—divine intervention or mere fate could also result in great harm to humanity. Near Bristol, antiquarians in the 19th century found a spectacularly beautiful mosaic, perhaps one of the finest ever created in Roman Britain, which portrays the legends of “Europa and the Bull,” “Athena and Marsyas” and “Achilles on the island of Skyros.” All are stories about mythological events that had tragic consequences. In the case of Europa, the ultimate result was the creation of an evil, man-devouring monster (the Minotaur). In the second, events led to the flaying alive of Marsyas by Apollo, and in the third myth the great hero Achilles’idyllic life on Skyros was the preamble to his death.

The last three stories also symbolize the fate of Romano-British art and culture—how Britain’s 4th-century Golden Age descended into its cultural nemesis, the Dark Ages. Within just a generation of the creation of the last mosaic masterpieces, Britain had ceased to be a part of the Roman Empire, and its political, cultural and technological fabric was beginning to disintegrate.
Not long after that, large tracts of land were being taken over by German barbarians. The villas were abandoned. The mosaics were buried, first under weeds and undergrowth and then under the debris of collapsed villa roofs and finally under successive layers of decaying vegetation, which over the centuries transmuted themselves into soil and farmland.

Only now, 1,600 years after the last mosaics were laid, are we beginning to rediscover the real meaning of the lost masterpieces for so long hidden beneath the fields of Old England.