Elizabeth I slept here - a look at the Queen's summer progresses 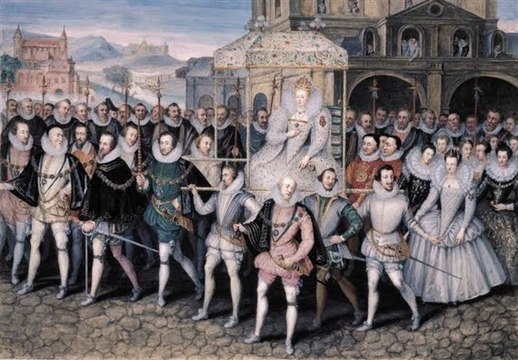 The Queen’s summer ‘progresses’ throughout her kingdom endeared her to her people, burdened her hosts, and left a legacy of royal lodgings for us to enjoy today

The Queen’s summer ‘progresses’ throughout her kingdom endeared her to her people, burdened her hosts, and left a legacy of royal lodgings for us to enjoy today.

Asybil clothed in white silk and a giant “full of passions” welcomed Queen Elizabeth I to Kenilworth Castle during her summer progress of 1575. Trumpeters eight feet tall guided her along the tiltyard (actually pasteboard figures behind which real musicians played “very delectably”), and a Lady of the Lake on a torchlit floating island regaled Her Majesty with Arthurian tales carefully embroidered to flatter the royal presence. 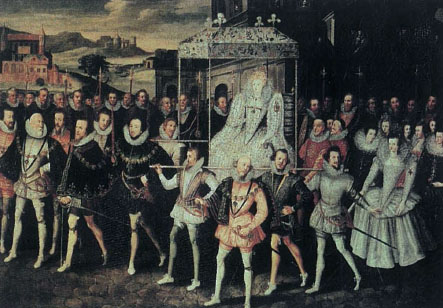 There followed 19 days of music, dancing, hunting, bear-baiting, a country wedding, an “ambrosial” banquet, masques, and fireworks. When it pleased Her Majesty - matters of the Court had to proceed irrespective of festivities - she knighted five gentlemen and touched nine others to cure them of scrofula.

The Queen’s stay at Kenilworth was the longest and most sensational visit she ever paid a subject, but then its owner, her debonair favourite, Sir Robert Dudley, was no ordinary subject. What his extravagantly stage-managed entertainment did demonstrate, however, was the length to which courtiers stretched to impress Elizabeth as she travelled around England each summer.

The start of the royal tour

Monarchs before and since have paid official visits to almost every corner of Britain, yet Elizabeth I remains the greatest exponent of the royal tour. Despite various political crises and dangers, she travelled nearly every summer of her 44-year reign, staying at some 241 different places from Hampshire to the Midlands. She did so partly to escape the diseases that could descend on London in the heat of summer. But she also genuinely wished to meet her people. Few could resist her charm, and even fewer have been able to match her brilliant sense of public relations.

The claim “Elizabeth I slept here” abounds among castles and manors, and many of them welcome visitors. Even better, we can occasionally follow the Queen right into the bed chamber because some of her destinations are now historic hotels.

An enormous effort went into transporting Elizabeth and some 1,500 members of her Court across the country. At least 300 carts conveyed the provisions and finery that Gloriana required to look her best, not to mention her personal hip-bath and walnut state bed decorated with gold-bespangled ostrich feathers. 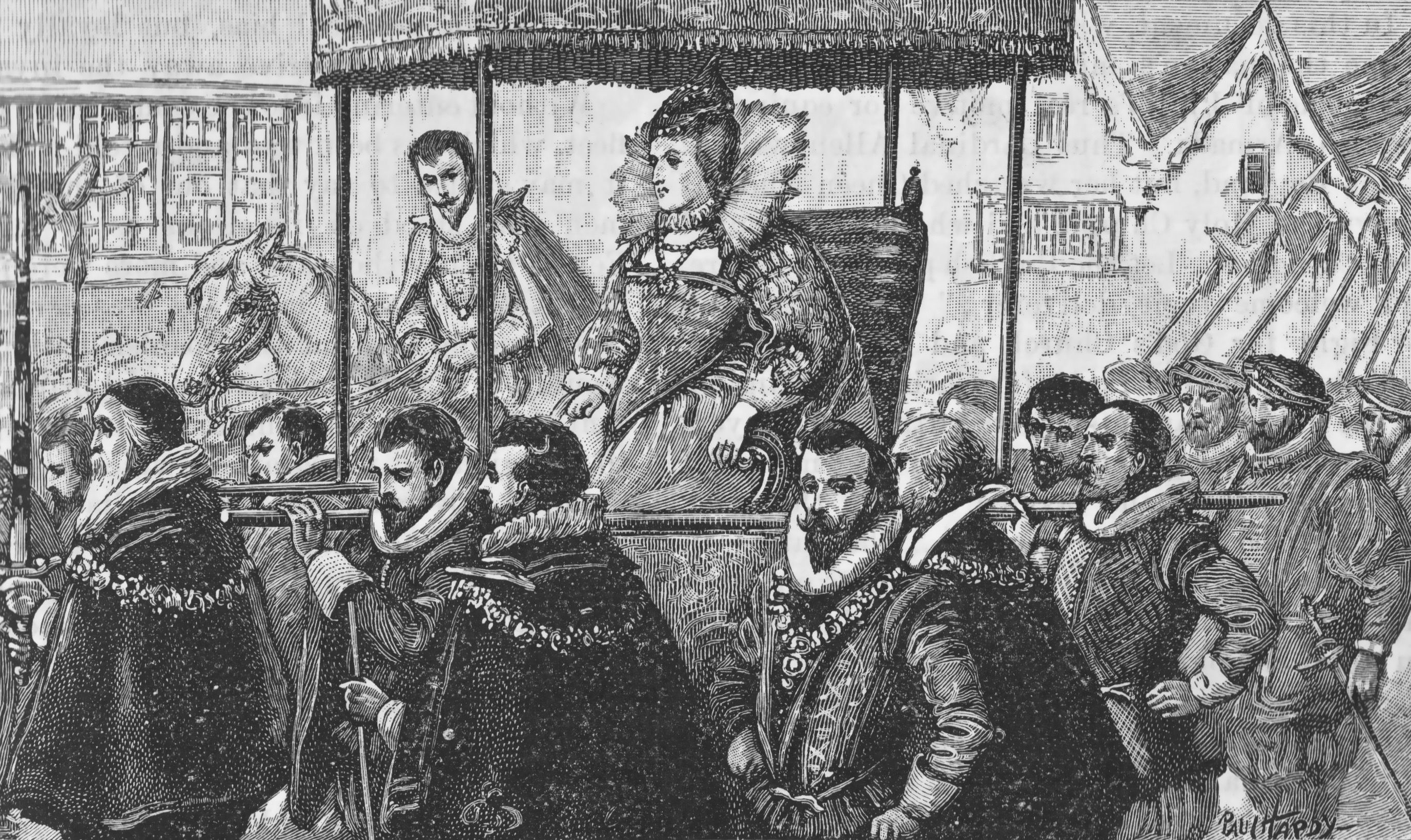 Victorian black and white engraving of Queen Elizabeth I being carried through the street surrounded by her courtiers;16th century Royal family; The Quiver 1888 Taken from the Quiver 1888

As the train of 2,000-plus animals, nobles, and liveried servants travelled up to 12 miles a day, crowds en route hallooed in wonder. They immediately recognized Elizabeth riding on her white mount, or sometimes in a coach drawn by Pomeranian horses with tails and manes dyed orange. She left sides of the vehicle open so spectators could see their auburn-headed Queen, and sometimes she waved or spoke a kindly word to even the humblest yokel. In this way, writer Thomas Churchyard noted, she could “draw the hearts of the people after hyr wheresoever she travels.”

A resting place fit for a queen

Before Elizabeth arrived at her destination, the Royal Harbinger would have checked its suitability. If the sovereign had found a place wanting in some detail of comfort during an earlier visit, she didn’t hesitate to upbraid her host-to-be. She stayed with her trusted adviser Sir William More at Loseley House, near Guildford, on four separate occasions during her southern progresses. Each time he was advised to lay straw on the manor drive to prevent the royal carriage from jolting its precious passenger, and he was also told to clean his house better.

We’ve no reason to believe the Queen harboured misgivings about another Surrey house, Great Fosters at Egham. Both she and her father, Henry VIII, used it as a hunting lodge, and Elizabeth’s 1598 crest over the main porch indicates serious royal connections. Guests at this stately home-turned-hotel may also be intrigued by the remarkable ceiling in the Anne Boleyn Room, dating from the 1600s. Emblems of Elizabeth’s ill-fated mother decorate the ceiling, believed to be a record of further half-forgotten but significant Tudor connections. 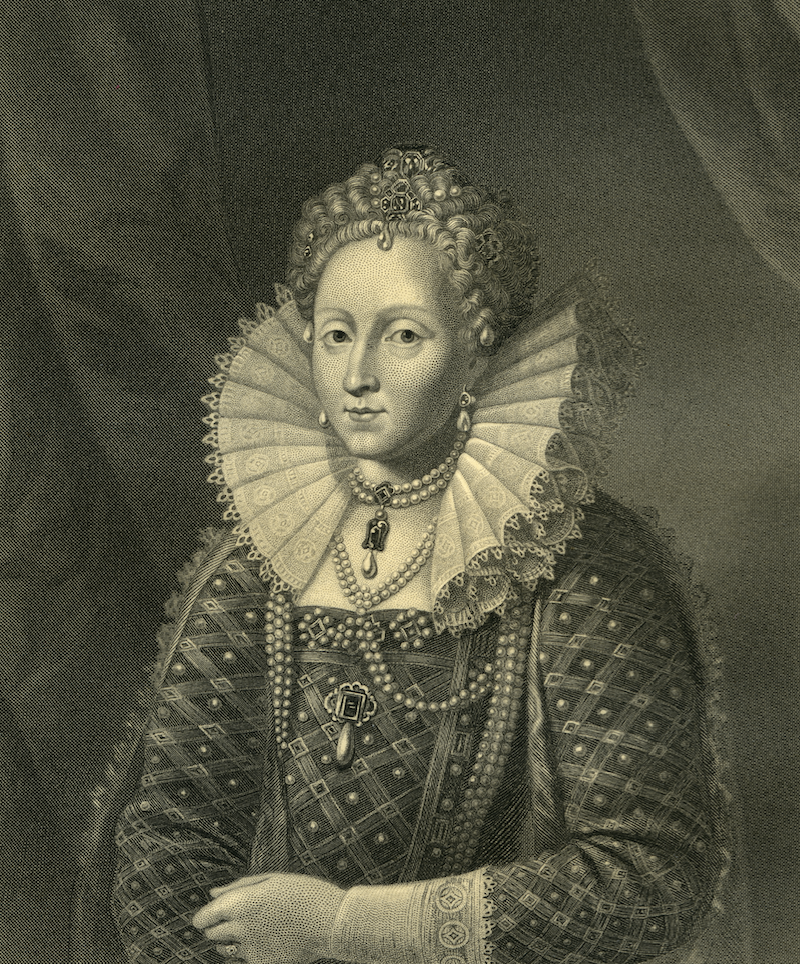 Elizabeth I, though she came in peace, unsteadied the finances of many a noble host. Her rapturously received progress through East Anglia in 1578 took her to Lord North at Kirtling five miles from Newmarket. “Supper and tarrying” for three days in September set him back more than £762, much of it spent on food, including an ornithological catalogue of 23 different species of bird from dotterels to peewit. A not inconsiderable £120 went to the purchase of a jewel for Her Majesty, who always expected gifts. Little wonder that a number of prospective hosts cried off, claiming an illness in the house or sudden landslides blocking the road.

Accommodation for an Elizabethian progress

Whole towns and cities shouldered equally prodigious cost and effort. During the same 1578 progress, the sheriff of Suffolk saw fit to accompany Elizabeth through the county with some 2,000 neatly apparelled escorts.

Neighbouring Norfolk outdid him by mustering 2,500 horsemen. “Her most dutiful city” of Norwich presented her with a silver-gilt cup overflowing with gold worth £100. “Princes,” the Queen pronounced, “have no need of money,” for it was in the true allegiance of her subjects that the real Treasury was to be found. She did, however, graciously accept the souvenir.

Elizabeth made fewer summer progresses in times of danger, especially in the 1580s. Nevertheless in 1588, as beacons on Sussex hilltops signalled the threat of the Spanish Armada, she took a 50-year lease on Amberley Castle upriver from the coast. She is said to have dined with her good friends at nearby Parham in 1593. Did her sub-tenants at Amberley wonder if she might visit them, too? The castle, built originally as a hunting lodge by the Bishop of Chichester, celebrated its 900th anniversary recently and few hotels feel as secure as one that lowers an oak portcullis at midnight!

In later years, in response to courtiers’ grumbles over the customary seasonal upheaval, the ageing but undaunted Queen bade “the old stay behind, and the young and able go with me.” In 1601 she broke her progress to hunt at Castle Ashby, Northampton. Even in her late 60s she rode 10 miles a day and refused to give up her sport. We should be grateful for that because we too can use the castle rooms designed to entertain her. The Queen Elizabeth Room commemorates her visit and is suitably fitted out with antique furniture.

Only Elizabeth’s death, on 24th March 1603, prevented her from embarking on that summer’s royal progress. She was mourned by a people who felt that their Queen genuinely cared for her subjects, a belief created in no small part by her travels among them.