Best of Scotland’s Rural Life and Culture on Exuberant Display


Mention The Highland to any member of the Scottish farming community and they’ll immediately know exactly what you are talking about.

Held annually at Ingliston near Edinburgh in late June, the Royal Highland Show is the premier agricultural event in Scotland and one of the foremost in the United Kingdom, showcasing the best of rural life and bringing town and country together. On display are the finest examples of Scottish livestock, along with Scotland’s top natural produce. Additionally, The Highland showcases environmentally friendly and innovative state-of-the-art technology and celebrates the country’s traditional skills and techniques. 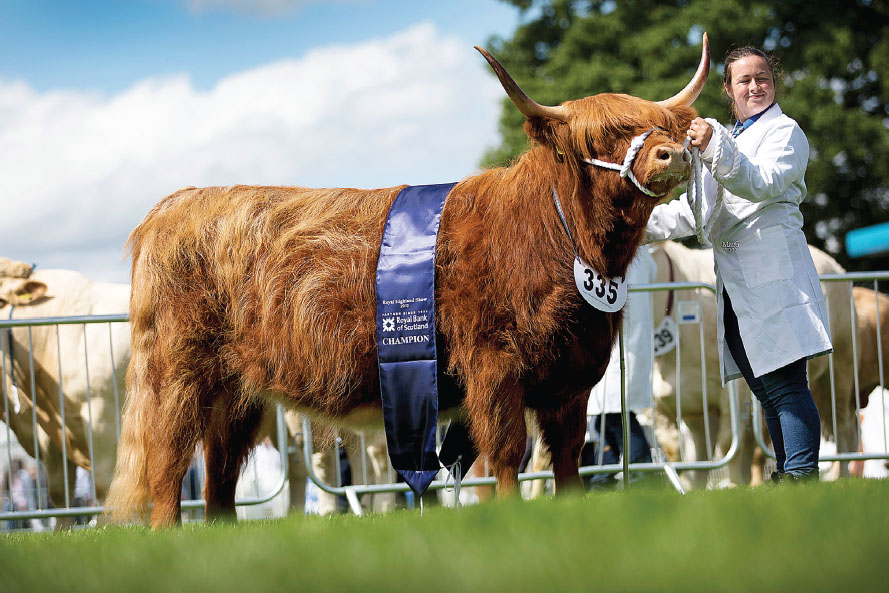 This Scottish Highland steer looks quite pleased with himself, and with the blue championship ribbon he has been awarded.[/caption]

Prospective visitors—the show attracts almost 200,000 visitors over its four-day run—should not assume, however, that “The Highland” caters only to country dwellers. The truth is there will be something at the show for everyone, young and old, no matter their background.

Livestock plays an important role in the show, and the first two days are largely about judging the quality of animals on display. Stockmen and women spend hours in the months leading up to the event preparing their animals for showing and, on the day of the competition itself, make sure that their beasts looks their best before handler and animal enter the show ring for judging. Around 2,000 farmers and breeders from around the United Kingdom enter cattle, sheep, light and heavy horses, ponies, goats and poultry, with some 5,000 animals entered in the different classes. 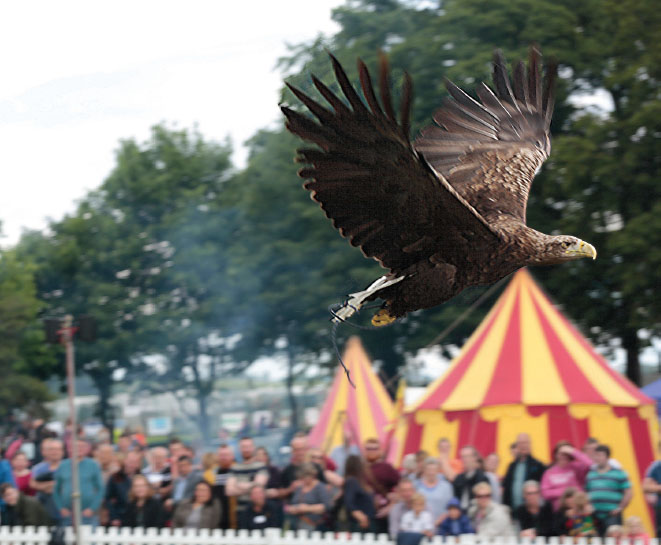 From falconry to farriers, Scotland’s rural avocations, arts and trade skills all find their biggest stage at the Royal Highland Show. Competition in livestock judging and equestrian events are only the beginning as competitive contests include horseshoeing, cheese and ice cream judging, ax throwing, sheep shearing and tree climbing.[/caption]

The animals are initially judged in their own age or breed class, and the stock judged the best in their class are awarded a cash sum. The real prize, however, is the prestige that accompanies the award, a red rosette to the winner and a card, known throughout the agricultural industry as a “ticket,” describing the class entered and place awarded. Competition is fierce and the award of any level of ticket at The Highland will add to a beast’s value and also give bragging rights to the winning owner. There are even higher accolades for the winner of any class that goes on to win the best of its breed or—the ultimate prize on offer—best in show.

For those who prefer horses to farm animals, the equestrian events attract riders of all ages and skills, from top UK competitors to relative novices. At the top level, the country’s finest show jumpers compete for a share of £50,000 prize money, while other competitions include heavy horses in classes for the best turnout. 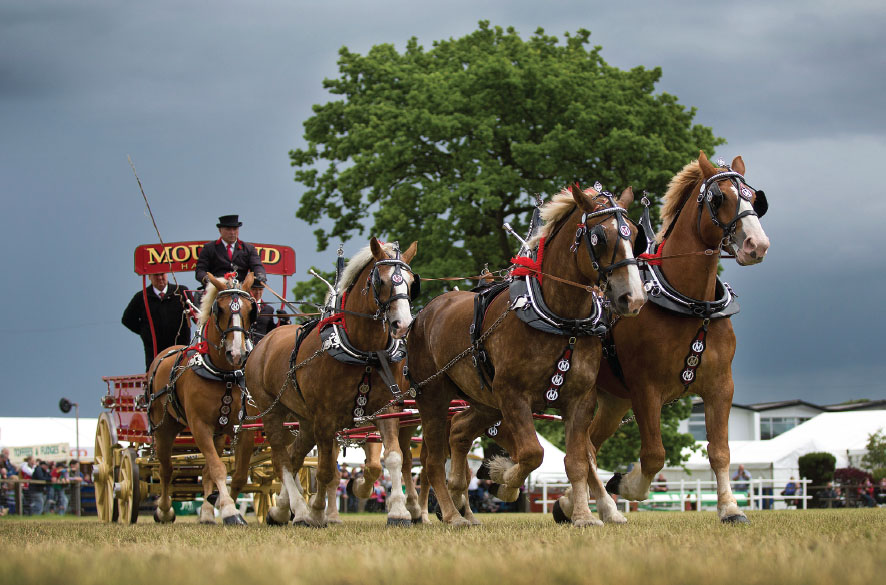 Of course, horses need to be shod. Farriers and their apprentices compete in making horseshoes from raw metal and in shoeing horses. In the sheep-shearing competition, the overall winner (i.e., the fastest shearer) is selected to travel to the World Championship in New Zealand. 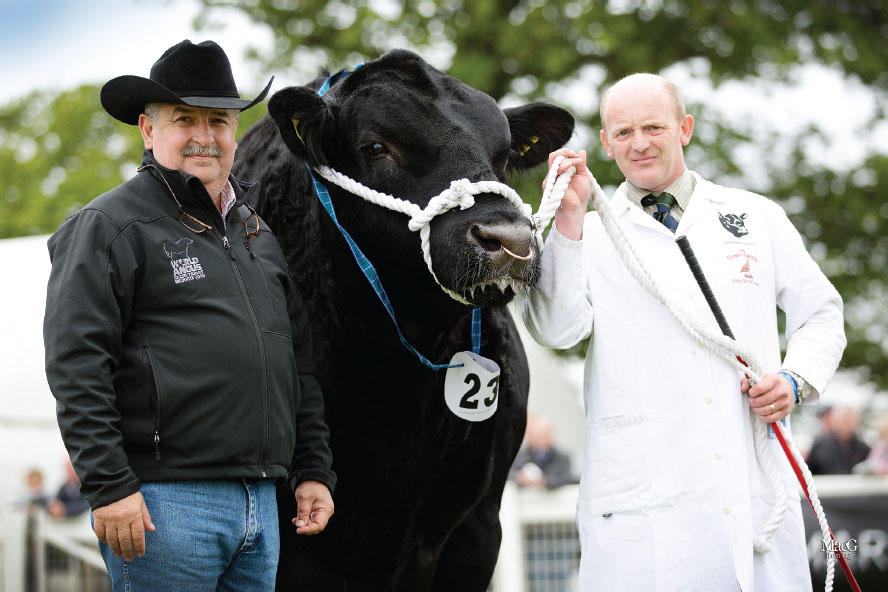 Big beasts aren’t confined to the show rings. Many of the exhibitors are manufacturers or suppliers of the latest farm machinery and innovative technology, which they display and sell at the show. Farmers see the machinery close up before either arranging a demonstration or making a purchase. Other stands feature cars, vans and commercial vehicles.

In a program that changes over the four days, there are numerous attractions for those with little interest in agriculture or crafts. More than 30,000 children visit the show each year, and take part in activities such as candle making. Kids also love the “Drakes of Hazard,” a performance that includes ducks being herded by a trained sheepdog and chasing a “hare” pulled along on a string by old-fashioned mechanical winding gear. 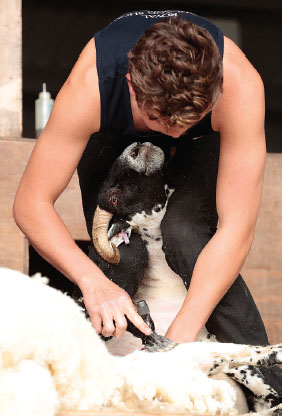 Interactive presentations include cooking exhibitions from top chefs or young farmers trying their hand at new recipes. Food and drink play a huge role in The Highland, with outlets selling the finest of Scottish fare—products such as Arbroath smokies prepared on the site. This is done in the traditional manner, smoking previously salted haddock in a cut-down whisky barrel containing burning beech and oak wood chips. The open top of the barrel is covered with hessian sacking to retain the heat while allowing sufficient oxygen to keep the chips smoldering. After some 30 to 40 minutes over the fire, the smokies are ready and, whether eaten hot or cold, they are a mouth-watering delicacy.

There is a competitive edge for food producers, too, with the Scottish cheese, butter and ice cream championships all on the show’s program. As one might expect at an agricultural show, it has very green credentials. And if all that food makes you a bit peckish, numerous outlets sell local and organic produce. An exhibition aimed at both children and adults features bees, with their place in the food chain as pollinators and the production of honey and its benefits explained.

An exhibit in its 17th annual appearance in 2016 displays the ancient art of drystone wall building. Visitors to the UK’s upland districts will be familiar with the craft of using field stones to build sturdy, long-lasting walls without the need for mortar or cement. Here Nigel Bialy has taken the craft to a new level, using the technique to build garden furniture, memorials, bothies or even simple bridges and other items. Stone means that the appearance of the feature constantly changes over time as nature, such as lichens and simple weathering, takes its course and produces an ever more natural effect guaranteed to blend in with the landscape. The display at this year’s Highland was a spectacular garden seat that would allow one to sit out in the sun and enjoy a glass or two of wine, or perhaps even a drop of fine Scotch whisky, if they were so inclined. 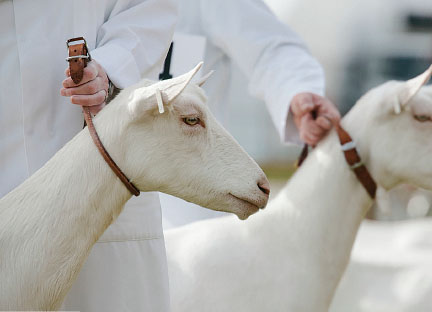 Did you ever see a prettier looking show goat? Only at The Highland![/caption]

You don’t have to wait until you get home to have that drink either. The show hosts a number of bars where you can have a glass of wine, sample a range of beers or, this being Scotland, taste some of the country’s finest whiskies.

Stalls at the show have craftsmen making walking sticks and shepherds crooks, particularly those with carved rams’ horn handles. Then, there are woodworking skills on display such as boat building and a wheelwright making wagon wheels.

The Countryside arena features outdoors skills and pastimes, such as birds of prey and fly-fishing/casting demonstrations, survival skills and an ax-throwing competition. Time is important for the really skilled as professional lumberjacks look to climb the 90-foot Douglas fir in the fastest time for the £2,000 first prize. 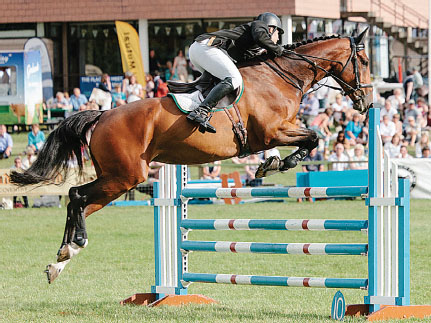 Show jumping is always a popular equestrian competition at The Highland.[/caption]

Music, of course, features throughout The Highland, with all manner of genres from the traditional Scottish pipes and drums and ceilidh to country and jazz on the program.

An International Visitors Center welcomes visitors from overseas with complimentary refreshments, free wi-fi and an opportunity to learn more about the show from the staff there.

For the farming community, one of the big attractions is the chance to meet up with old friends and meet new ones, while learning the latest farming trends and exchanging gossip. Whether you have an interest in farm life or not, however, The Highland is a wonderful occasion for discovering Scotland’s rural life. If you happen to be in Scotland in June, it is well worth a visit!

How to get there:


Edinburgh Airport connects with flights from the rest of the UK. In fact, the Highland Showground is a 10-minute walk from the airport. Alternatively, there is a shuttle bus (for a small charge) that runs between the terminal to the Holiday Inn Express Hotel situated at the show’s north entrance

By road, the AA (Automobile Association) erects yellow signposts on all major routes into Edinburgh giving directions to the show. Car parking costs £8 per day.

The show is also easily accessible by rail. A regular bus service runs to and from the showground from outside Edinburgh’s Haymarket Station.

Further information on The Highland is available at royalhighlandshow.org.