In Search of Lorna Doone

The romance of Exmoor and the North Devon coast 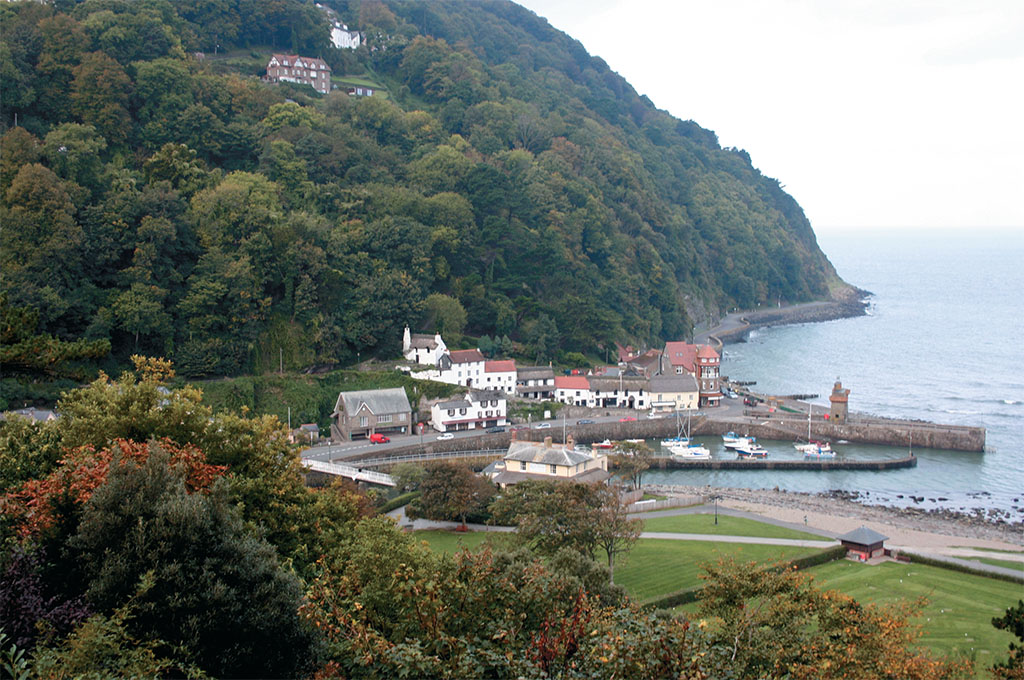 5
Lynmouth’s tiny harbor curls around the estuary of the River Lyn that falls through a deep gorge off the Exmoor plateau.[/caption]

Exmoor and the lush, sheer coastline of North Devon may be the most famous landscape never visited. Atlantis, Avalon and Camelot: For most people, this “Lorna Doone Country” has that same mystical quality. It’s a place more imaginatively conjured than actually explored. Unlike its mythical sisters, though, Exmoor and the channel coastline do exist—it’s just difficult to get to them. Perhaps that’s one of the elements that make the region so charming.

Train lines don’t run to this part of the country; even Brunel would have had a hard time building a line along this coast. There’s really only one way in and out of the area: the A39 west from the M5 at Bridgenorth. This is not dual-carriageway, but a country drive through the hedgerows of West Somerset. You might detour through the village of Nether for a visit to the cottage of Samuel Taylor Coleridge (in season) or refreshment at the Ancient Mariner pub across the street.
A couple of miles before the coast at Mine head, the medieval village of Dunster is something not to be passed by. Park in the convenient lot on the village outskirts and walk down an unspoiled, cobbled medieval street (complete with early 17th-century timbered Yarn Market) to Dunster Castle.
Minehead has long been a seaside playground for West Somerset. One of the three remaining Butlins holiday camps dominates the seafront. From here, the A39 follows the channel coast all the way to Cornwall.

“In the narrow river valleys, trees and arable crops grow, and there are farms and villages”

From the quaint village of Porlock, the road bobs and weaves two miles up Porlock Hill at a 25 percent gradient to the northern plateau of Exmoor. At the top, views sweep over the coast and the broad Bristol Channel to South Wales in the distance, and south across ripples of rock and heather to the horizon. A herd of wild Exmoor ponies grazes contentedly, unmindful of the chill wind off the Atlantic. The dark, stubby breed has broad faces and thick coats adapted to their environment.
Extending 30 miles to the south, Exmoor National Park stretches over rolling moors swathed in heather, bracken and gorse. Waters off the hard, limestone plateaus have worn narrow river valleys on their way to the coast. In the valleys, trees and arable crops grow, and there are farms and villages.
Across 50 miles or more to the southwest, the coastline drops precipitously into the sea, often from this plateau of hundreds of feet. Deep ravines in the coastline break down to the shore where the rivers meet the sea. In these breaks grew the harbor towns and villages that pock the coast from Minehead to Clovelly.
This is Lorna Doone Country. The ruggedly beautiful, rural area takes it name from the eponymous heroine of R.D. Blackmore’s famous 1869 novel Lorna Doone. Subtitled A Romance of Exmoor, the late-17th-century adventure is set in the hidden river valleys, deep ravines and wind-swept moorlands of Exmoor. Lorna Doone was once almost universally known and on the standard reading list of English novels. Those days are past. Perhaps the most timeless element of Blackmore’s novel, however, was his depiction of the lush landscape and its impact upon life. Visitors today who have read the novel find his passionate verbal pictures just as he described them.
The tiny hamlet of Oare occupies one of the moor’s deep valleys. It is signposted to the left off the A39 about 15 miles west. A long, winding drive down to the stream at the valley bottom ends at the tiny medieval church. It’s always open. Here at Oare church, the climactic scene of Lorna Doone is acted out at her wedding. There is a memorial plaque to R.D. Blackmore near the door. 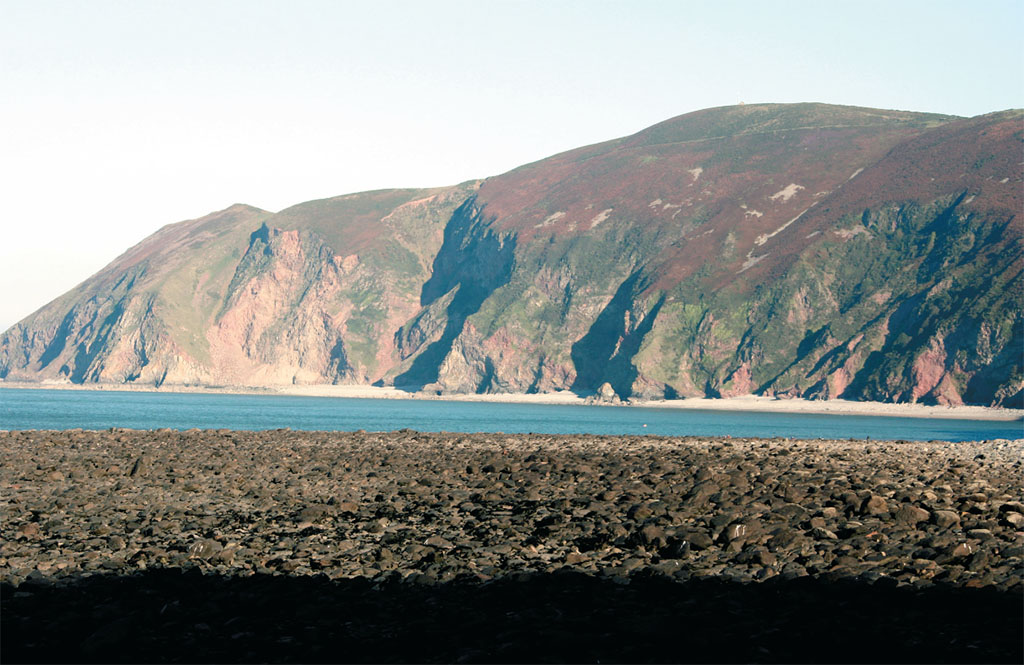 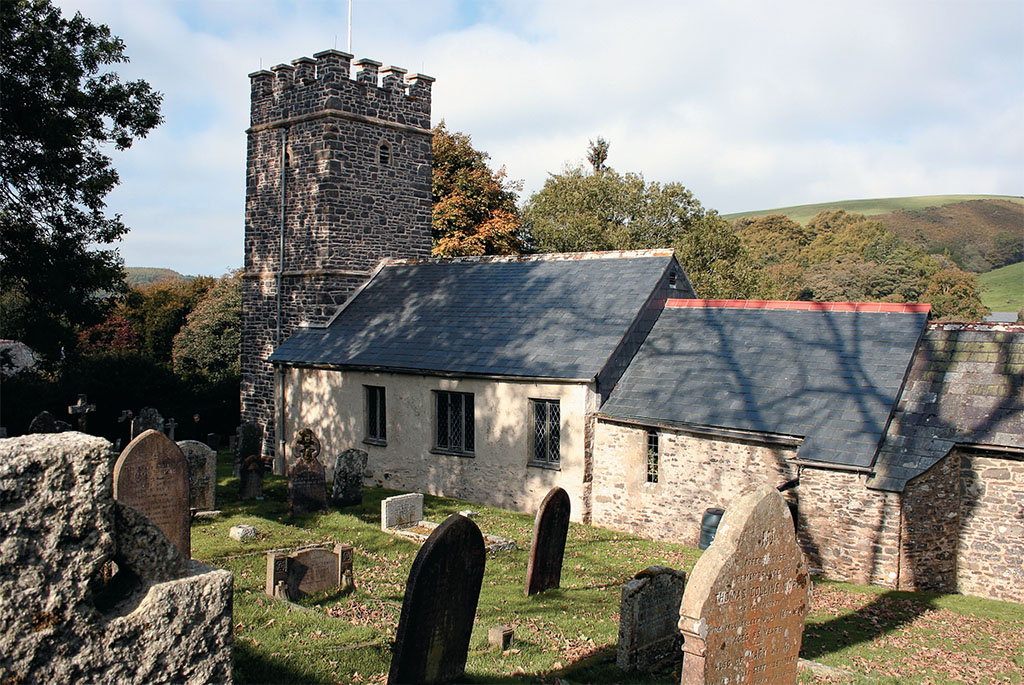 5
The view stretches across Barnstaple Bay from Clovelly’s harbor toward Westward Ho![/caption]

A few miles farther on, the road descends into the ravine formed by two branches of the River Lyn coming down off the moors. Here at Lynmouth a small harbor curls around the estuary. On the western clifftop, Lynmouth’s sister town of Lynton enjoys spectacular shoreline and coastal vistas. The two are connected by the Lynton & Lynmouth Cliff Railway. Since 1890, the water-powered tramway has been an integral mode of transport in the villages—and one of the area’s most popular attractions.
The people live up in the residential and commercial center of Lynton; the visitors are entertained down in the old waterfront of Lynmouth. On the cliffside between the two, a number of hotels and guest houses welcome visitors. I am not the only one to have always found Lynmouth a great base for North Devon adventures.
Lynmouth’s quay features eating temptations, hostelries, craft galleries, sundry shops and, of course, the terminus of the Cliff Railway. A small museum de tails Lynmouth’s grim claim to fame in 1952. A “perfect storm” combined to bring devastating floods down the twin gorges of the River Lyn, sweeping away more than 100 buildings and 34 lives.
At the Exmoor National Park visitors center, I asked the affable attendant whether anyone actually read Lorna Doone anymore. “I don’t know how many of them actually read it,” he replied, “but we sell an awful lot of them here. At least people want to take it away as a souvenir.”
From Lynton, the A39 veers inland across a peninsula to Barnstable. The single-track coast road through Valley of Rocks is much more fun. Here at Valley of Rocks, the cliffs are the tallest in England. The narrow track leads to the hamlet of Martinhoe, where the pretty 12th-century church is always open. Eventually, you end up seaside in Ilfracombe. With a working harbor, Ilfrecombe is now largely a modest seasonal playground. A well-kept waterfront features lovely flowered parks, a tidal seawater swimming pool and Ilfracombe Museum—as well the customary seaside fare and fun.
The largest town in North Devon, Barnstaple is a market center with a working riverfront leading to Barnstaple Bay. The A39 follows the bay to Bideford and southwest to Cornwall. Westernmost on the Devon coast, the village of Clovelly is widely renowned. After all, not very many communities charge admission.
The entrance to Clovelly is at the car park atop the village. There’s a café and plenty of souvenir and craft shopping available. The village spreads along a single cobbled street down a steep cliff toward a small harbor. With no vehicles in Clovelly, residents of the village’s tidy, flower-decked cottages transport their groceries and household goods on wooden-runnered sledges to their front door. Getting down Clovelly is strictly by foot and treacherous at the best of times. 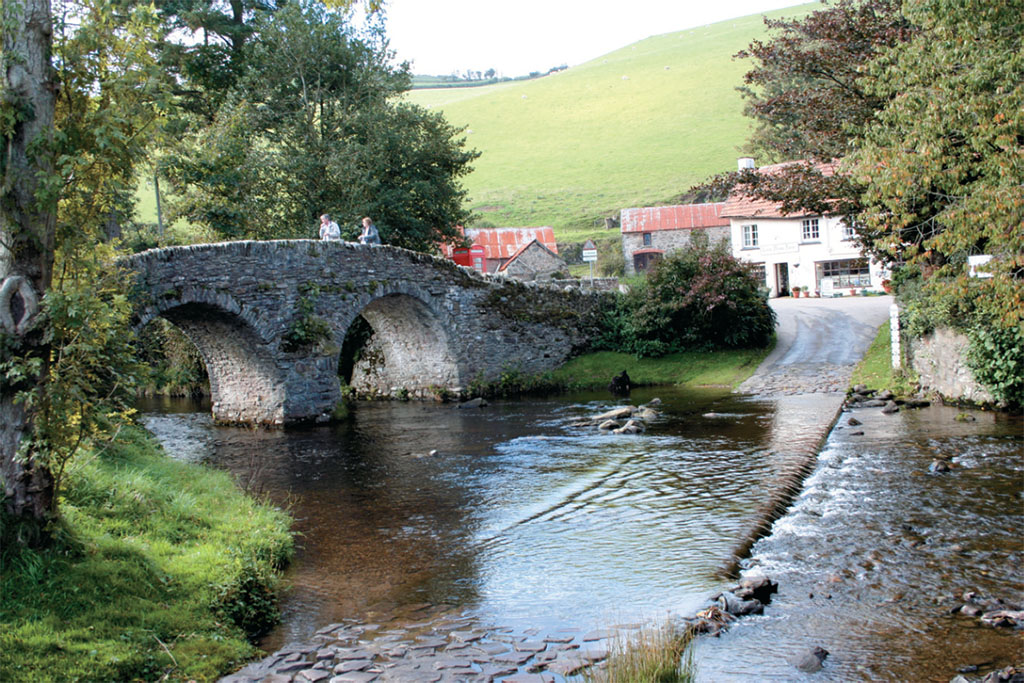 5
Take either the ford or the bridge to Lorna Doone Farm in Oare.[/caption]

A few tearooms, village shops and a couple of pubs break this steep avenue. There’s also a small museum to Clovelly’s seafaring past and an old fisherman’s cottage to see. Alternatively, of course, you could pay £2 back at the car park to ride in the back of a Range Rover down a bumpy track to Clovelly’s harbor. The New Inn is a great place for a restorative before the walk or ride back up.
Turning inland from Lynmouth, the B3223 leads across the moors through Exmoor Forest to Exford, perhaps the prettiest of many attractive Exmoor villages. Farther east, a single track road leads up onto Dunkery Beacon, the highest point in Exmoor. You’ll have to park and walk the last few hundred yards yourself.
Back in Lynmouth, I paused for my own restorative pint at the Village Inn, along the harbor’s pedestrian street. I chatted with proprietor Beverly Quanstrom, who enthused about Lynmouth and the 96 people on its voting roles.
The romance of Lorna Doone must still hang about the place. Its magical quality struck Quanstrom when she was here on holiday a couple of years ago. “I was sitting in that very corner eating a pastie,” Quanstrom said, “when it struck me. I bought the Village Inn, went back home to Sussex, packed up and moved here—and I’ve loved it ever since.”
Standing on a cliffside patio at night, with the lights draped across the harborside below and twinkling from neighboring hotels, and the faint glow of South Wales across the dark water, I find it easy to imagine such romance.