Birthplace of the Industrial Revolution 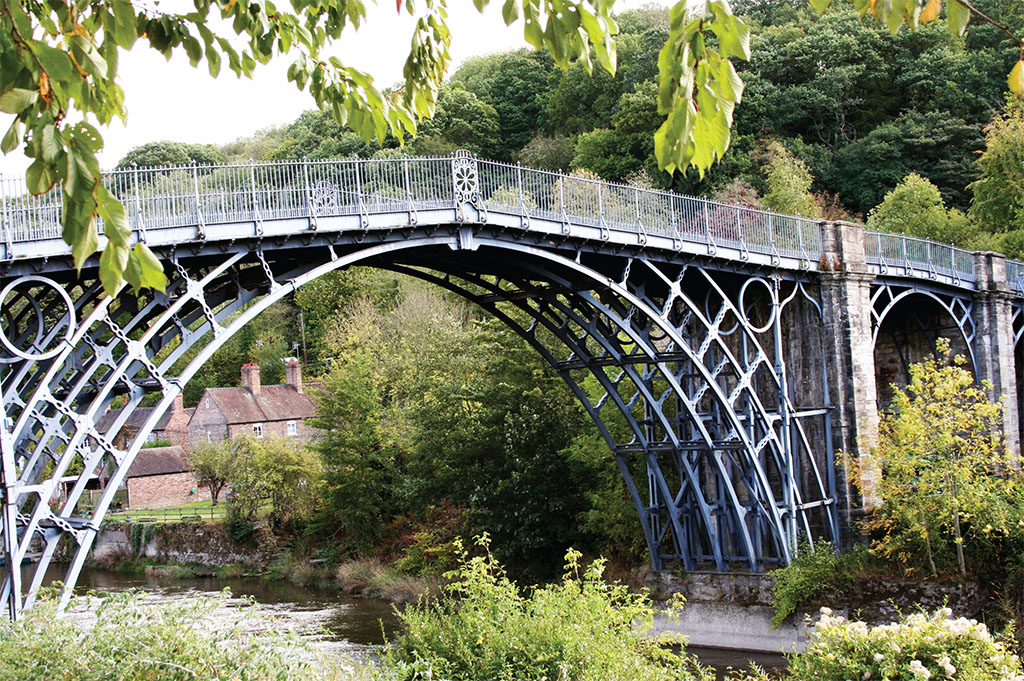 5
Built in 1786, the first iron bridge in the world remains beautiful today.[/caption]

The quiet wooded countryside of rural Shropshire seems like an odd place for a revolution of any kind. There’s not even a city in the county. Down through the agrarian countryside, the River Severn creates river valleys between the rolling hills. It’s a generally pastoral place, apparently as far removed from industry as from revolt.
Yet here, more than any other spot on earth, lie the beginnings of the peaceful revolution that changed all of human life. Ironically enough, Ironbridge Gorge held all the ingredients necessary for the birth of modern industry. Where the River Severn flows today, the gorge was scoured in the last Ice Age by retreating glaciers laying bare the seams of raw earth beneath the surrounding landscape of rich topsoil—seams of high quality china clay, coal and iron ore.
For centuries folk had been taking ore off the surface to make iron, smelting it in eon-old fashion with charcoal, also derived from those wooded hillsides. Then, in 1779, Abraham Darby built a furnace to smelt iron with much hotter coke. And the rest, as they say, is history.
At the Coalbrookdale Museum of Iron, Darby’s original Old Furnace is housed under cover, preserving the huge brick kiln where it all began. The legend at the brick forge says it succinctly: “This blast furnace is one of the world’s most important industrial monuments. It was here that Abraham Darby succeeded in using coke instead of charcoal to smelt iron. This would ultimately lead to commercial iron-making on a massive scale.”
Yes, Darby’s process led to the wide-scale production of iron and steel. With the process in place, Darby and subsequent early “industrialists” in the valley had several providential advantages. First, the minerals (coal, clay and iron ore) were all in one place. Second, these did not have to be extracted by digging down, but by taking the minerals from the sides of the gorge. And finally, the river itself provided the means to transport the valley’s finished products to the outside world. The valley itself soon blazed with furnaces and prospered.

In 1786, Darby constructed a bridge across the Severn valley—the first iron bridge in the world. People came from across the globe to see this architectural wonder of the modern age. People still do. The bridge stands today, as impressive now as ever, with its ornate iron arches spanning the gorge and a pretty, brick tollhouse at one end (long closed, but open in summer with displays on the bridge’s construction). These days, the bridge is confined to pedestrian traffic.
Over the next few decades, the several villages along both sides of the gorge grew up with industries built on the valley’s easily available raw materials. While Coalbrookdale became the center of iron production, the Coalport China Factory—further south—produced world-renowned ceramics for more than a century. The village of Jackfield became the center of the world’s tile industry.
The valley is quieter today; the heavy industry that built its reputation is long gone. Its heritage, however, remains as important as ever. Founded in 1967, the Ironbridge Gorge Museums Trust was established to fittingly preserve the sites of the valley’s contribution to industrial history (and the growth of British Empire).
The Museums of Ironbridge administer 10 museums and visitor sites over a five-mile stretch through the gorge. Near Darby’s historic furnace, two homes of the Darby family are open to illustrate how the ironmasters lived and moved and had their being—just a bit differently from the workers that subsequently found their own futures in the valley.
Although the Old Furnace may be the most important historic site, it is not the premier attraction. Certainly Darby’s Ironbridge itself continues to draw the ohs-and-ahs, and the visitors. 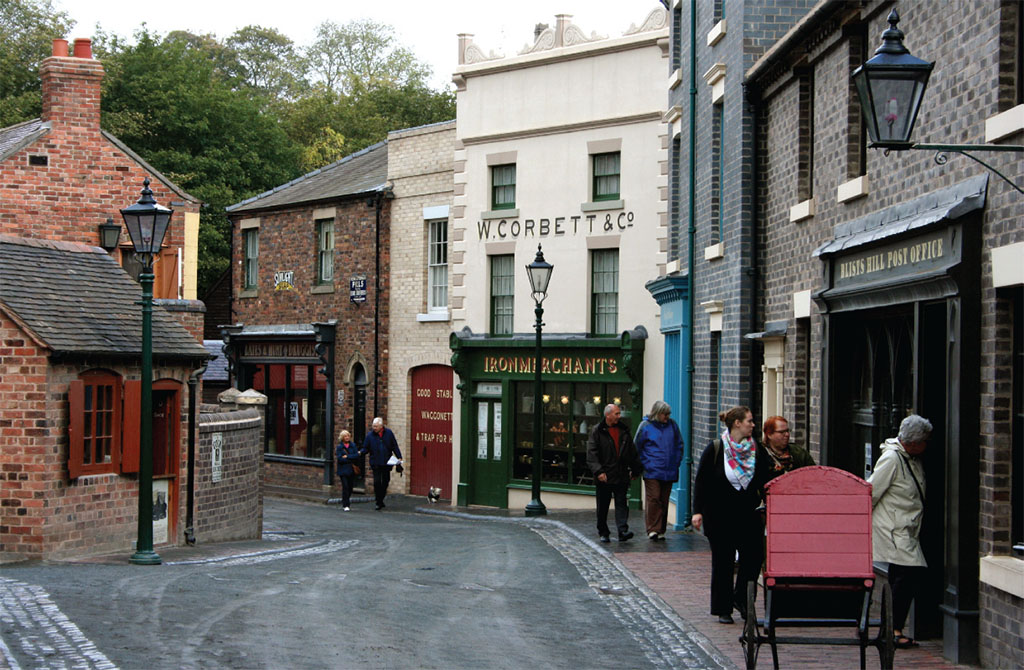 5
In the Old Furnace at the Coalbrookdale Museum of Iron, Abraham Darby first smelted iron with coke instead of charcoal.[/caption]

As Paul Gossage, the Trust’s director of marketing, describes it, however, Blists Hill Victorian Town is “the queen bee” of this industrial hive, drawing far more visitors than the other sites (and particularly a wonderful day out for families). And understandably so, despite the truth that Blists Hill is and isn’t a real town.
In 1890 the British Empire was in its heyday, as was the valley. Where Blists Hill was built, coal and clay were mined, iron was smelted, and bricks and roofing tiles were made. ’Twas a bustling place, and the remains of all this activity are still visible on the site. Over the years, of course, change and progress continued to alter the landscape and, one by one, the industries that made their mark here moved on.
Without a perspective on the lives of the people who lived in and worked there, an industrial site, however world-changing, can be quite sterile. Blists Hill fills in the missing parts of the picture. The Museums Trust has painstakingly reconstructed the bygone world of its inhabitants—relocating, rebuilding and representing the social history of valley life as it was 1890-1910. This is living history at its best. Entering the High Street, you might stop in at Lloyd’s bank, to change your modern currency for pence and shillings to spend in the town’s shops or at the chippie. 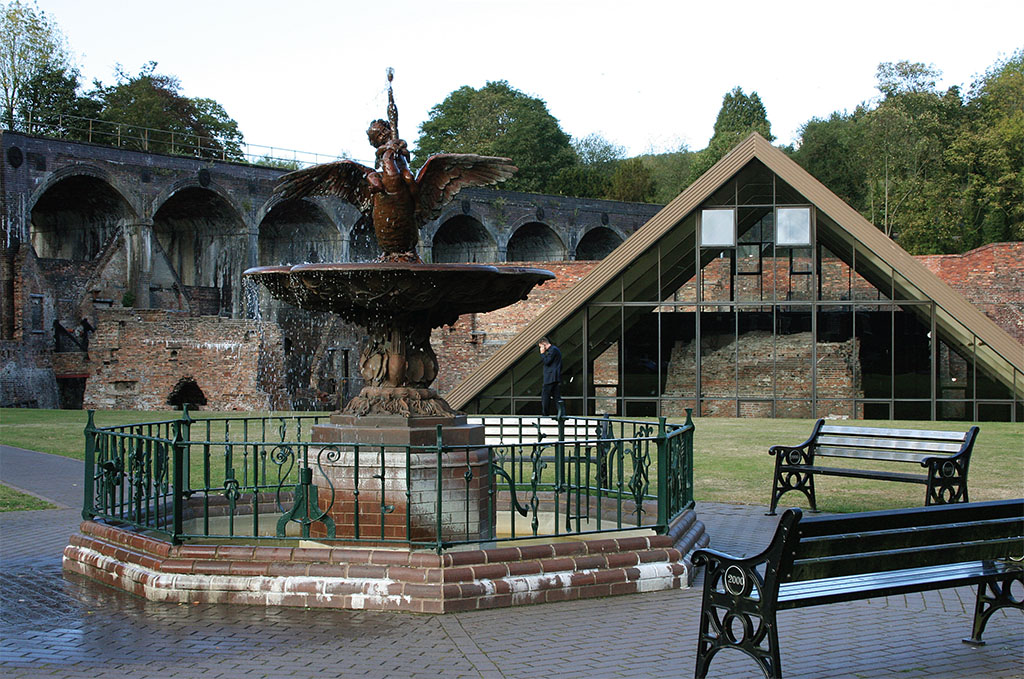 Stop in to the doctor’s home, where his wife is painstakingly hooking a rag rug in the parlor. Duck your head to enter the squatter’s cottage, where the good wife nurses a cup of tea in front of the coal fire. At the pub, the pianist and his partner belt out music hall tunes. And keep an eye for the policeman on springless bicycle patrolling the town to assure that all is as it should be.
Kids of all ages can take the swing boat ride or shoot out coconut shells in the carnie games at the fairground. Or take a horse-drawn wagon ride around the 50-acre site. Of course, none of us would want to end up in the chair of the Victorian dentist. Foundry and pharmacy, photographer and fish-and-chip shop, more than 50 buildings and exhibits unpack the working, social and domestic life of Blists Hill. At every step, interpreters and craftsmen in authentic Victorian kit help unfold the life of the town.
It was a very different life from that at the beginning of Victoria’s reign in 1837. The very industries that bloomed in Ironbridge Gorge contributed mightily to the transformation of life through the 19th century. Through those decades Britain’s national wealth and the living standard of her people increased with a rapidity that left people shaking their heads: railroads connected the country; heretofore unheard-of consumer goods appeared in shops; there was an explosion of science, technology and education. And in a very real sense, it all began here.
In Jackfield, once the largest tile works in the world, one of the old factories displays room after room of colorful tiles in settings such as a butcher’s shop and pub, and the Covent Garden tube station.
At the Coalport China Museum, see dazzling displays of the old factory’s famous work—and poke your head into one of the original bottle kilns still standing.
They’ll provide that head with a hardhat for a stroll into The Tar Tunnel, where in 1787 miners struck a vein of natural bitumen, and the black treacle still oozes from the old brick-lined walls.
More than half a million visitors a year make their way to Ironbridge Gorge. In 2011, the collective of Ironbridge Gorge museums celebrated their 25th anniversary of being declared one of Britain’s first World Heritage Sites. If anywhere deserves such a designation, this is the place. 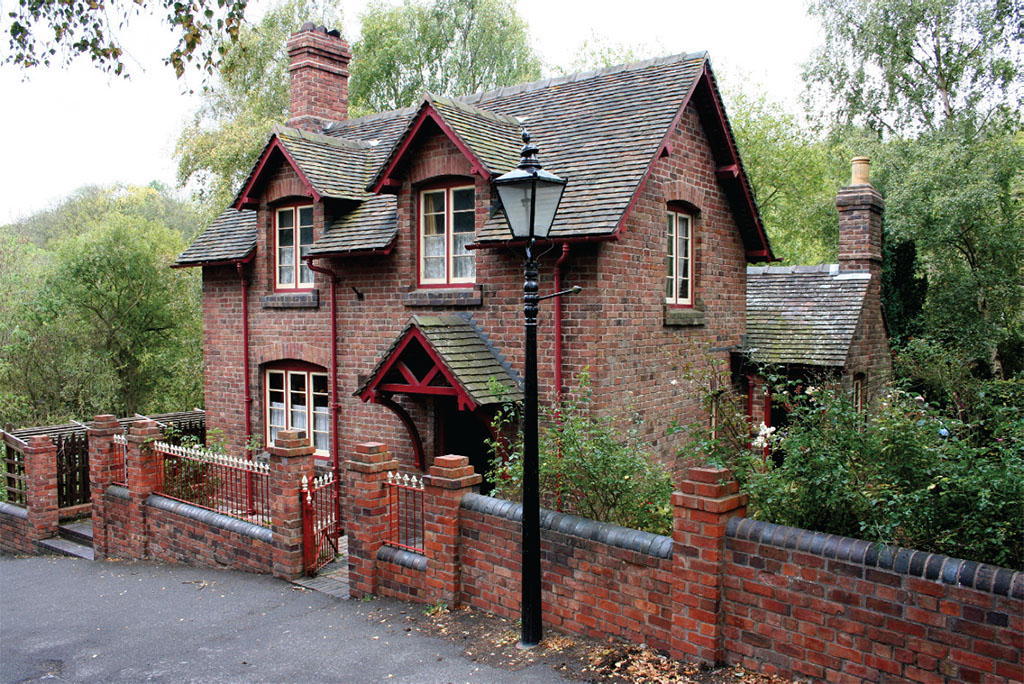 5
At the doctor’s house, his wife is in the parlor painstakingly hooking a rag rug.[/caption]

THE MUSEUMS OF Ironbridge


From junction 4on the M54, brown signposts clearly mark the way into the valley and its attractions.
BLISTSHILL VICTORIAN TOWN – An A-list visit, breathing life into the valley’s history.
COALPORTCHINAMUSEUM – Home of the Coalport China Factory from1796-1926.
TAR TUNNEL – Duck your head, and keep your jacket away from the walls.
MUSEUM OF IRON – Amazing fine art castings, the early industry and the Old Furnace.
DARBYHOUSES – Rooms filled with original furniture, costumes and mementos.
ENGINUITY – Hands-on exploration of the power of technology.
IRON BRIDGE&TOLLHOUSE – The graceful lines of the world’s first cast iron bridge.
MUSEUM OF THE GORGE – Unpack the history of the valley and its significance.
JACKFIELD TILE MUSEUM – They still make tiles, or create your own at a workshop.
BROSELEYPIPEWORKS – Where clay tobacco pipes were exported around the world.
Separate admission is available to each of the museums, or get a Passport providing unlimited access.