How life and art flow together 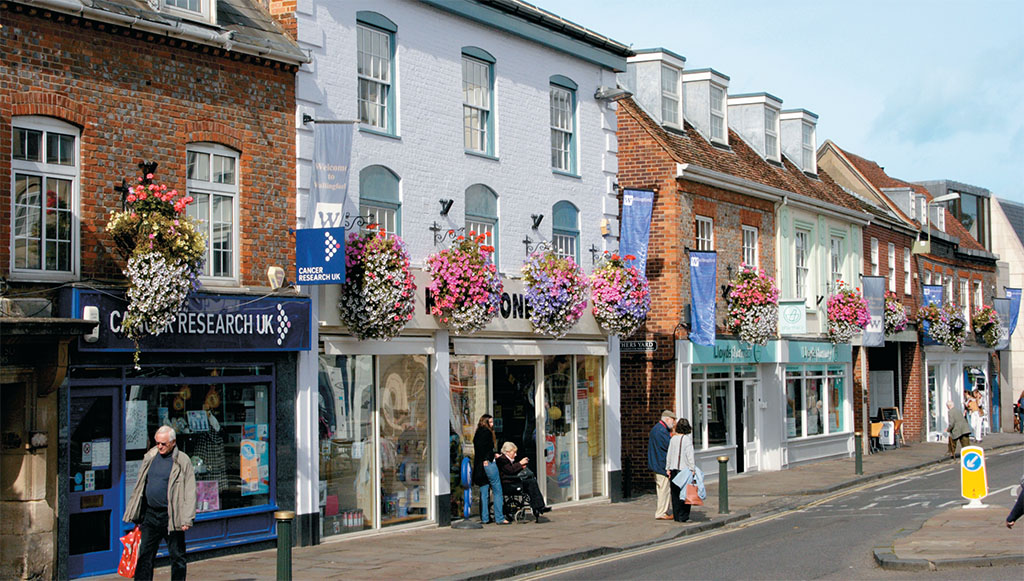 5
Decked with flowers around a cobbled square, the center of Wallingford seems like the archetype of market towns—just as it’s supposed to.[/caption]

Sitting on the south side of the River Thames a dozen miles below Oxford, Wallingford is a quiet, almost sleepy, market town of 7,000. Baskets of flowers hang from shops and public buildings surrounding the market square. Folks pop in and out of Greggs and Boots, and wheel their shopping trolleys from Waitrose to the car park. The Tourist Information Centre at the Town Hall closes for lunch and the pubs are quiet through the midday. Yet behind the placid façade of rural English life, murder lurks behind every hedge and garden wall.

Welcome to “Causton,” county town of the fictional county of Midsomer. For 15 seasons Wallingford and the surrounding countryside and communities have been the principal location of the popular ITV production Midsomer Murders. Through 2011, the series’ hero was Detective Chief Inspector Tom Barnaby, played with understated relish by the popular John Nettles. On his retirement from the role, he has been replaced by nephew John Barnaby (Neil Dudgeon). Here in the bucolic heart-of-England countryside, the bodies have been dropping like proverbial flies since 1997. It’s been calculated that Midsomer is among the most dangerous places on earth, bested in its murder rate only by Cabot Cove, Maine (Murder, She Wrote).
In fact, Wallingford is as quiet as it appears. The frenetic Criminal Investigation Division of Midsomer Murders just doesn’t exist. Wallingford does have a police station, of course—open 10-2 three days a week, principally for the convenience of people needing to pay traffic fines. For other matters, the phone line to Thames Valley Police is posted.

“It’s a picturesque backdrop for a good old-fashionedmurder”


For fans of the series, which has been broadcast in more than 220 countries worldwide, however, the town is recognizable indeed. The Market Place and the Town Hall at its head have been filmed in many scenes over the years.The Corn Exchange is now the community theater, and doubles as Causton Playhouse. Its resident amateur dramatic company, the Sinodun Players, has provided extras in crowd scenes a number of times over the years. Locals are accustomed to spotting familiar faces in the crowd. Wallingford Bridge and local shops also make an appearance from time to time.
Yes, it might seem just all a bit of play-acting, a picturesque town making a picturesque background for that most entertaining and English of genres: the good, old-fashioned murder mystery. After all, that’s why we love those murder mysteries so. Against the most unlikely of backdrops, the most unnatural of crimes occur. From a world of order, disorder erupts. Enter DCI Barnaby or Miss Marple, Lord Peter Wimsey, Hercule Poirot or Brother Cadfael, and ultimately order is restored. Murder mysteries are comedies, not tragedies. Justice is done and the world is put right.
Ironically enough, however, Wallingford’s benign appearance is deceptive. Far from being simply a lovely generic market town, the south Oxfordshire community is a most appropriate locale for its law-and-order setting.
Back in the 9th century, Wallingford was a border town, linking Wessex and Mercia at its ford across the Thames. It was a frontier town, fortified by Alfred the Great as one of the most important Saxon “burghs” against the rampages of invading Vikings. Two centuries later, William the Conqueror ordered a castle built to control those same Saxons. It dominated the Thames Valley for the next 600 years. After the fortress became the last garrison to hold out for the king during the Civil War, Parliament had the castle razed in 1652. In those more violent centuries, law and disorder often depended on who was holding the weapons. Only the earthwork ramparts of Wallingford Castle remain today, splayed across quiet gardens and meadows in the heart of town at the river’s edge. 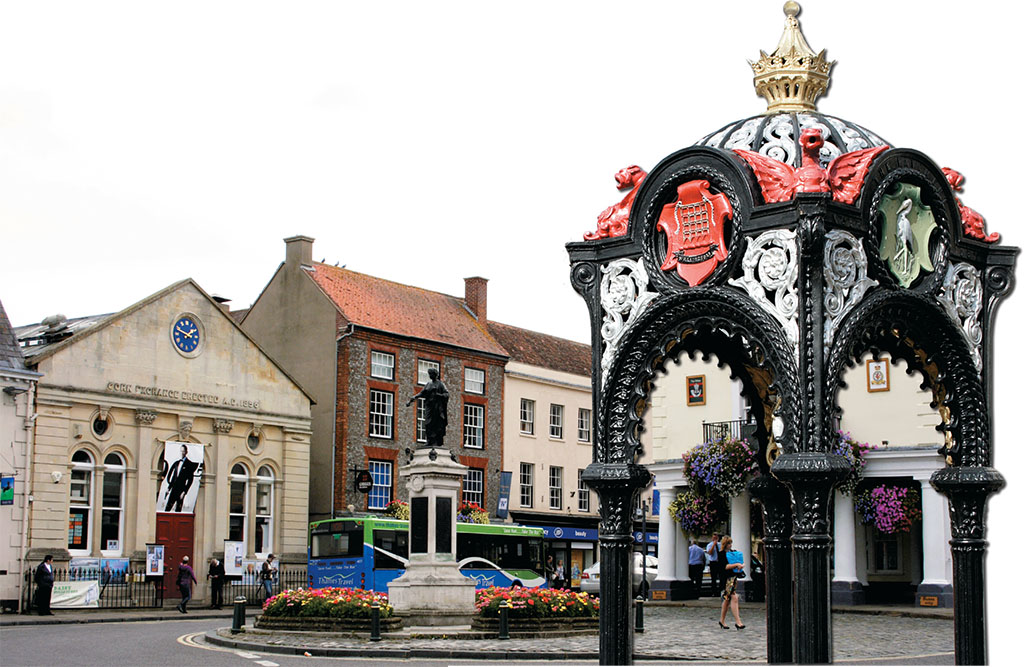 5
On the quiet Thames, Wallingford’s violent history is remembered only as part of the distant past.[/caption]

Since the 17th century, of course, both law and the administration of justice have become more codified. For that, much credit is due Judge William Blackstone. A young professor of law at nearby Oxford University, Blackstone was appointed Magistrate (or “Recorder”) of Wallingford in 1749 and purchased the property here in 1758 that was home until his death in 1780. Here, Blackstone wrote and published four volumes called Commentaries on the Laws of England that became the first codification of English civil law. Just a few years later, Blackstone’s Commentaries formed the basis of the new United States Constitution and legal system. The guidebook to Wallingford asserts a bit optimistically, “Blackstone’s is a familiar name to most Americans.” 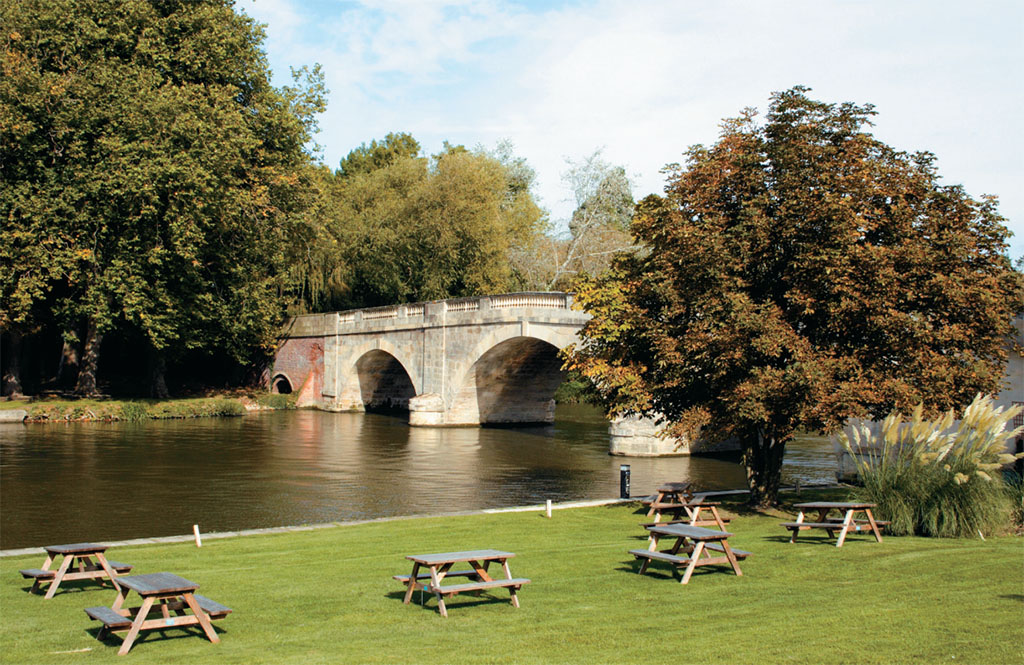 5
Far from being a hotbed of crime, Wallingford is just a quiet riverside town.[/caption]

The judge and father of English jurisprudence was a churchwarden in the town parish of St. Peters, and actively campaigned for the church’s rebuilding in the 1770s, contributing significantly to the building of its spire and donating its Communion Silver. On Blackstone’s death in 1780, he was buried in St. Peters and his memorial adorns its aisle. Unhappily, the church is no longer an active house of worship, but you can sign out the key at the Town Hall TIC.
If Wallingford has a historic role in law, however, it also takes great pride in its connection to those lovely English murders. For the town was also the home of Agatha Christie. The unexcelled master of the genre moved to Wallingford in 1934 with her husband, archaeologist Sir Max Mallowan, and lived in the town until her death in 1976. Their home, Winterbrook House, is privately owned today, but sits behind a hedge just off the street on the southern outskirts of town. A blue plaque marks the house.
The best-selling author of all time (with more than 4 billion books and counting), Dame Agatha Christie generated more corpses and solved more murders than even Midsomer Murders can boast. While Christie took care to avoid local publicity, her one active involvement was to serve as the president of the Sinodun Players from 1951 until her death. She and her husband had reserved seats for the troup’s performances at the Corn Exchange.
A regular worshipper at St. Mary’s Church, Cholsey, on Wallingford’s southern edge, Dame Agatha and her husband are buried together in the corner of Cholsey churchyard. A mossy tombstone marks their graves.
It’s not hard to imagine Dame Agatha popping in to the butcher’s shop or arriving with Sir Max for a local theatrical production. It’s not hard to imagine Miss Marple sitting on a bench in the market square, or DCI Barnaby greeting his wife in front of the Town Hall. Causton is, after all, meant to be an English “Our Town”—a nowhere and everywhere far from the urban noise and tarmac—where life is peaceful and timeless and values are untrammeled. It’s what we want in our world, even if that’s not the world we live in day-to-day.
Wallingford fits the bill just right. The Wallingford Museum (in the pretty 15th century Flint House) unpacks its proud local history delightfully, complete with Christie’s typewriter, books and correspondence, as well as details of the town’s anonymous celebrity as “Causton.” Judge Blackstone lies peacefully beneath the spire of St. Peters. Meanwhile, children play down in the water meadows next to Wallingford Bridge in the spire’s shadow. And someone has to water all those hanging flower baskets. Sometimes life imitates art perfectly.


Wallingford is easily accessible from the M4. Take the A329 north about 15 miles from Junction 12 just west of Reading.
The George Hotel is the classic and charming three-star coachinginn in the center of Wallingford. Just a couple of miles north toward Oxford on the A4047, the Shillingford Bridge Hotel sits right on the banks of the Thames. It’s a bit more moderate in price and offers a riverside swimmingpool in season.
Check out the much-above-average website www.wallingford.co.uk for other localoptions and opportunities.
The bustling university city of Oxford is only a 20-minute drive to the north. Alternatively, take the A4130 east the same distance to the fashionable rowing center of Henley-on-Thames. 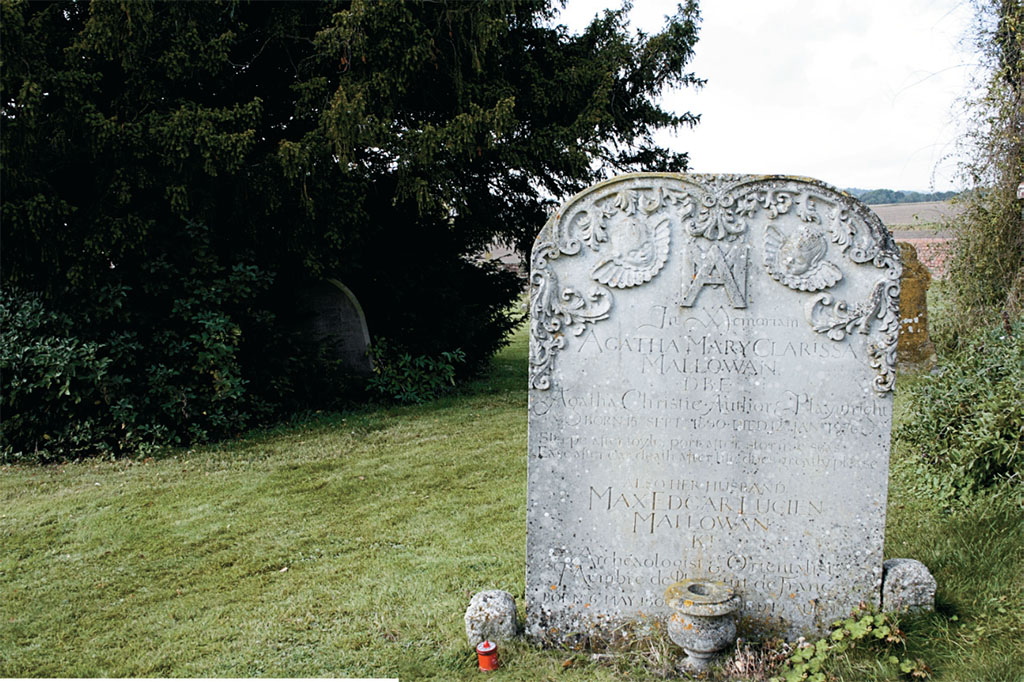 5
Perhaps the town’s most celebrated resident, Dame Agatha Christie is buried with her husband in Cholsey churchyard, where they worshipped regularly.[/caption]