From Staffa’s sea caves to the puffins of Lundy, you’ll find beauty, history and singular adventures


We all know Great Britain–that’s the large island that includes London, Edinburgh and Cardiff–but there are thousands of smaller islands that combine with Great Britain to form the British Isles.
Some are tiny, some uninhabited, some can only be visited at certain times of the year. But if you are prepared to cross the seas and make an island day trip part of your next itinerary, you will be pleasantly surprised by what you discover.

THE EASIEST PLACE to begin exploring Britain’s small islands is on Brownsea Island in Poole Harbor, Dorset, two hours by train from London.
Brownsea has caught the eye of many over the years. The monks from Cerne Abbey built a monastery here in the 9th century, although that didn’t survive when Viking raider Canute took control of the island shortly before seizing the throne of England.
The castle that you can see (but unfortunately cannot visit) was built in 1547 under the orders of Henry VIII, who recognized Brownsea’s strategic importance in protecting England’s south coast. The name most closely associated with Brownsea, however, is Robert Baden-Powell, who hosted the first ever Boy Scout camp on the island in 1907. From 21 boys on the inaugural week-long camp, the Scout movement has expanded into a worldwide movement with more than 40 million members.
Take a stroll around the island and you’ll stumble across
the castle, the remains of a 19th-century abandoned village bombed by the Luftwaffe, and monuments commemorating the site of Lord Baden-Powell’s camp. Keep an eye out for the wildlife, too–Brownsea is the only place in the south of England where you’ll see red squirrels.
Time your visit for July and August and you might be lucky enough to catch a production by the Brownsea Open Air Theatre company, which has performed a Shakespeare play annually for more than 50 years.
Ferries operate daily from Easter to October, departing every half hour from Poole. 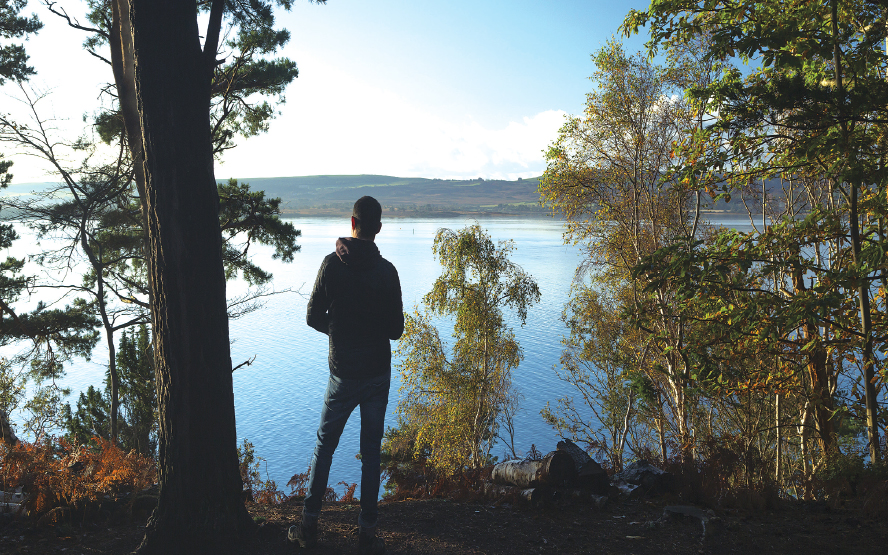 Bardsey: Find a sense of spirituality

THE MONKS OF CERNE ABBEY were not alone in making use of small islands to get closer to God. The isolation offered by small islands means that they have often been sought out by those looking to connect with their spiritual side. Among them is Bardsey, close to the Gwynedd coast–its religious past has led to it being called the island of 20,000 saints. Not bad for an island less than a square mile in size.

By Rept0n1x via Wikimedia Commons

Saint Cadfan began Bardsey’s holy heritage in 516 when he founded St. Mary’s Abbey. In medieval times it came under the control of the Augustinian order and was a place of pilgrimage–three trips to Bardsey were considered equal to one pilgrimage to Rome. Like most monasteries, it didn’t survive the Reformation, but pilgrims continue to visit, although nowadays only the ruins of a 13th-century bell tower remain.
The once-thriving monastic community was survived by a hardy group of farmers and quarrymen; now the population is down to just four wardens. The 19th-century schoolhouse and chapel can still be seen, the relics of a community that lived on the edge.
Take the ferry from Porth Meudwy or Pwllheli between May and September.

Lindisfarne: Breathe in the history

YOU DON’T NEED A BOAT to visit Lindisfarne, off the Northumberland coast. It’s an island accessed by a causeway that floods at high tide, so be sure to check the timetable to ensure a safe crossing and prevent an unintended overnight stay! 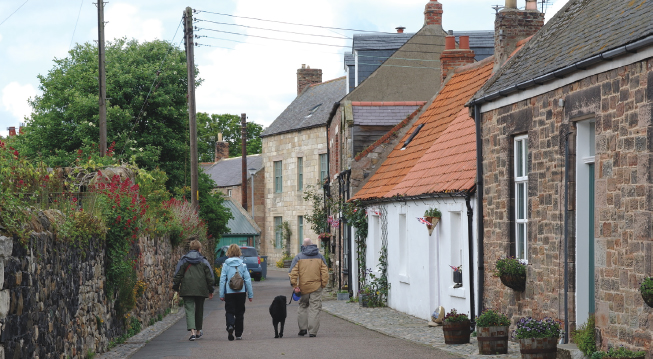 Islanders head home in the small village of Lindisfarne.[/caption]

There are two places you simply must visit. Start with Lindisfarne Priory, one of Britain’s most important Christian sites during the Dark Ages. Founded by Saint Aidan and home to a number of saints, including Cuthbert, the patron saint of Northumberland, Lindisfarne was a place of prayer and learning. However, the illuminated Lindisfarne Gospels and other riches drew the attention of Vikings across the North Sea, and it was in 793 at Lindisfarne that the first Viking raid on Britain occurred. 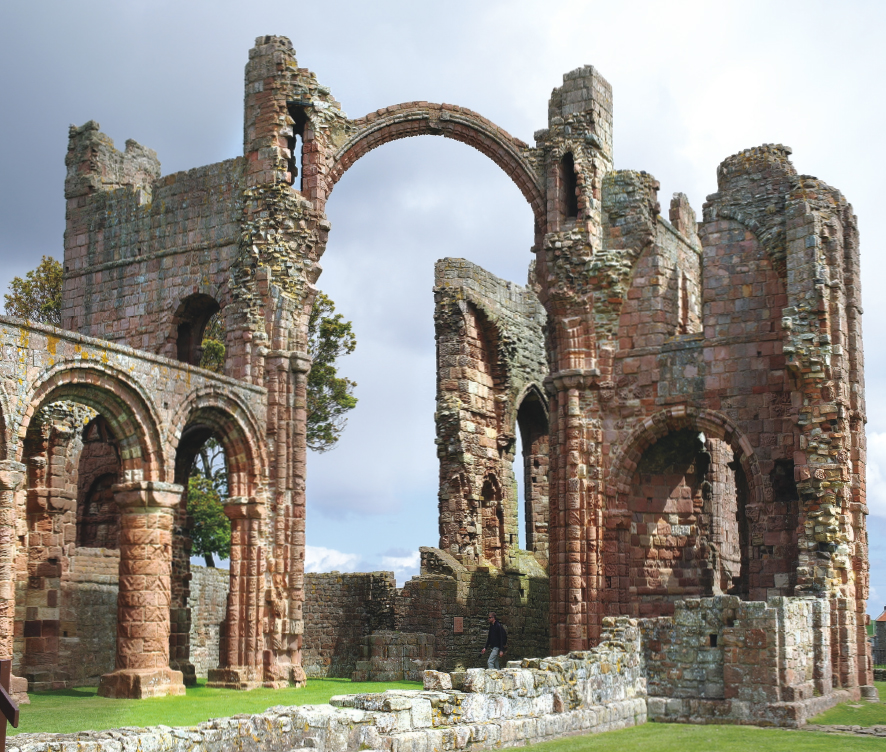 The Holy Island of Lindisfarne was a center of Celtic Christianity in Northumberland—until it was sacked by the Vikings in 793.[/caption]

The Priory never reached the same heights after the Vikings sacked it and was eventually abandoned during the machinations of the Reformation. Some of the stones were robbed to help construct Lindisfarne Castle, a Tudor fortification designed to protect the border against the Scots. Head inside to discover a surprising early 20th-century interior designed by Edwin Lutyens and a stunning view of the island from the upper battery.

The tidal causeway tends to flood twice every 24 hours for up to eight hours at a time. There is a pilgrim footpath, also tidal, across the sand.

Staffa: Explore a wonder of geology

UNLIKE LINDISFARNE, Staffa is a relatively recent addition to the history books. It first came to attention in 1772, when naturalist Joseph Banks paid a visit to the Inner Hebrides. He raved about the small island of Staffa, drawing later visits from Queen Victoria and a host of 19th-century names. Felix Mendelssohn composed the Hebridean Overture after a stay there, while Joseph Turner captured the island on canvas.
All were drawn to investigate Staffa’s remarkable geology. Entirely volcanic in origin, the slow cooling of layers of basalt has resulted in quirky columns of rock, the same process that formed Giant’s Causeway on the Northern Irish coast. A number of sea caves dot the coast, most notably Fingal’s Cave, made entirely of those hexagonal basalt columns. The sea has even carved out a convenient walkway, allowing explorers to venture right inside on foot.
Staffa is uninhabited and possibly the most difficult to visit among this collection, but for those exploring this patch of Scotland, it is well worth braving the waters of the North Atlantic. Hope that the sea conditions allow a landing because, just like Mendelssohn and Turner, the magnificent geology will send you away inspired.
Staffa is an island that can be visited from an island. Boats run from Mull and Iona, or alternatively from Oban on the mainland.


Lundy: Take a walk on the wild side

LUNDY ISLAND, in the Bristol Channel, is only three miles long, but still offers plenty for those that board the ferry in walking boots. Start at Marisco Castle, a fort built by Henry III in an attempt to control the troublesome de Marisco family after they reportedly attempted to assassinate him. It didn’t work–the Mariscos turned to piracy in the Bristol Channel. Four centuries later, the island was lost by the English crown for five years when it was captured by North African Barbary pirates.
Follow the coast north, where the historic lawlessness continues. You can spot Benson’s Cave, where 18th-century Member of Parliament and notorious swindler Thomas Benson stored stolen goods. Also keep an eye out for debris from the German Heinkel bomber that crashed in 1941; you’ll see it just south of the Halfway Wall.
A modern addition to the landscape are the Lundy Letterboxes–27 hidden caches that form a treasure trail, each with a rubber stamp to prove you found it. A fully stamped card is great souvenir of a day’s walking on Lundy.
Take the Landmark Trust ferry from Bideford or Ilfracombe. It operates between March and October on Tuesdays, Thursdays and Saturdays. 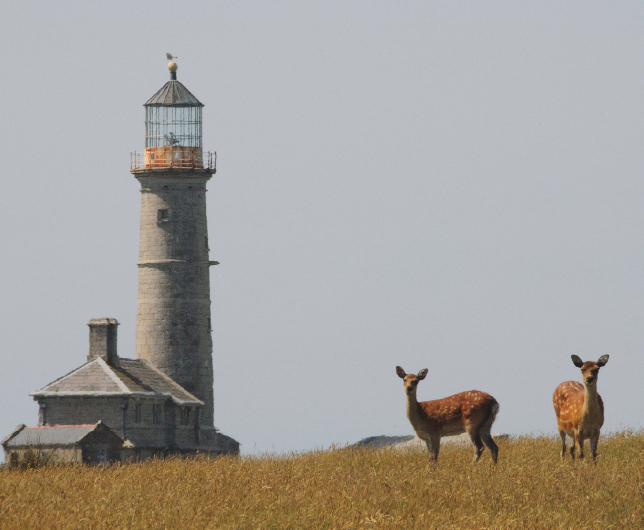 
Piel: A chance to meet royalty

PIEL ISLAND is only about half a mile from the Cumbrian coast, but in making the short hop across the water, you enter another king-dom. The landlord of the only pub on the island, the Ship Inn, is nominally crowned King of Piel. In truth, he isn’t king of very much–just the pub, a terrace of houses and a castle.

The castle is Piel’s big attraction. Built by the monks of Furness Abbey to protect trade, in 1487 it was seized by a pretender to the English throne, Lambert Simnel. He claimed to be Richard, Duke of York, the younger of the two murdered Princes in the Tower, and used Piel as the launch pad for his invasion of England. It was a failure, although Henry VII pardoned Simnel and set him to work in the royal kitchens-he was only 10 years old, after all!
The castle is now held by English Heritage, which allows free access to the unmanned site. Take the opportunity to breathe in the sea air and daydream, unencumbered by the overbearing guides and audio-tours so often found elsewhere.
Take the ferry from Roa Island (linked to the mainland by a causeway). It runs daily from Easter to September.

Skomer: Where to watch wildlife

THE ISOLATION of islands isn’t just an attraction for those leading a life of prayer–it is also great for wildlife. If you want an island experience that gets you close to the natural world, Skomer, off the south-west tip of Pembrokeshire, should be your destination.
Time your visit for spring and you’ll see the island carpeted in bluebells. From the boat’s landing site, wander a few hundred yards to the Wick on the south of the island. This sheer cliff is carved with ledges that are ideal for nesting seabirds, while the opposite cliff is ideal for visitors who want to view them. You’ll spot guillemots, razorbills, cormorants, kittiwakes and shags, but don’t forget to watch the skies in case you spot a peregrine falcon seeking a chick-sized meal.
Binoculars aren’t necessary for the island’s star attraction. While you watch the cliffs, puffins wander in and out of their burrows on the cliff top. Surprisingly small black-and-white birds with a colorful beak–you can’t help but smile at the clowns of the bird world as they waddle past your feet.
Enjoy the short ferry trip from Martin’s Haven that leaves every day except Monday from April to September. 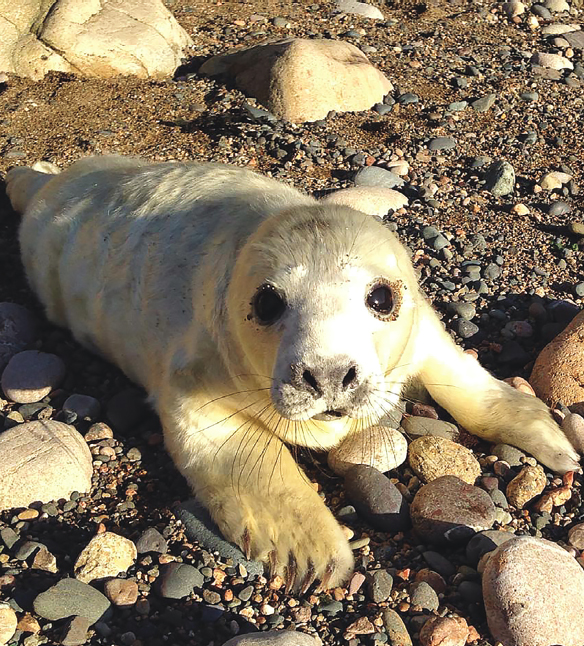 Off the coast of Pembrokeshire, Wales, take a day with the wildlife of Skomer Island, where the star attraction is the burrowing puffins that wander around your feet.[/caption] 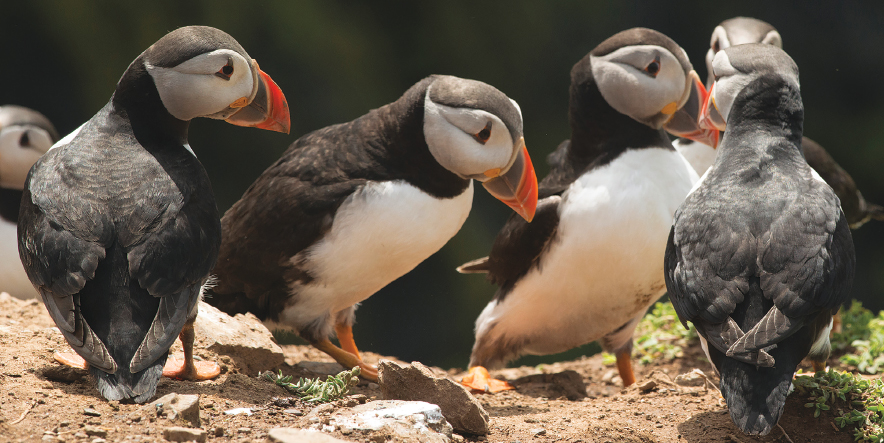