Notes from the Road to Cornwall 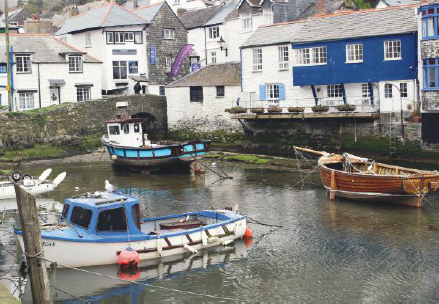 THE ADVENTURE BEGINS. Once more, as veteran British Heritage readers know, about every third of these personal essays i devote to taking readers along on the editorial adventures that I gather in Britain spring and fall. After freezing in the north Country the last two Aprils, I was taking no chances. Come on along as we head to the West Country. It was perfect weather for travel and pictures throughout—the best i can remember.

Day 1 – A Straight Shot to the Southwest Peninsula


After landing at Heathrow, I picked up the perky Peugeot and headed for the West Country—the M25 and M3 to the A303, which leads across northern Hampshire, Wiltshire and past Stone-henge into Somerset to Devon. It’s just about 200 miles from Heathrow to Plymouth. I encamped as close to the water as I could. Plymouth is the Barbican and the Hoe. After the overnight fight and five hours drive, I explored as much as strength allowed. You read more about Plymouth in “On the Road.”

Day 2 – On the Picturesque Cornish Express


On the southwest side of Plymouth, the River Tamar marks the border of Cornwall. Cross the Tamar Bridge—the original built by the legendary Isambard Kingdom Brunel—and welcome to Celtic Cornwall. My route was along the south coast into areas I had never seen. I headed to the famous Cornish fishing villages of Looe and Polperro, both wonderfully worth their reputation (and way off the beaten path). Polperro is a real treat; park at the top of the village, and take the Polperro Tram down to the colorful harbor. I threaded the back roads to the Bodinnick Ferry across the river to Fowey. Road signs announced that I was in Daphne du Maurier country.
I was on to St. Austell and then Cornwall’s only city, Truro, and a visit to wonderful Truro Cathedral (completed in 1910). Next, I headed for Falmouth, both a holiday destination and a working port, Falmouth has a harbor filled with pleasure craft and working shipyards. On the head stands Pendennis Castle, built by Henry VIII, and scene of a five-month successful siege by the army of Parliament during the Civil War. It was after six when I made it to Penzance and got a room at the Queens Hotel. The hotel was familiar, but young Gemma on the front desk, eh, didn’t remember when I stayed here before—and bought pints for a couple of young soldiers that had just returned from fighting in the Falklands.


Sea fog blanketed West Cornwall; from the breakfast room, visibility was not much more than 100 yards. There wasn’t much point to an early start. The fog hadn’t lifted much as I headed on the back road the 10 miles to Land’s End. One can’t avoid it, and shouldn’t want to, but Land’s End itself is one of the few places in Britain that really deserves the moniker “tourist trap.” With a five quid charge to park, the privately owned complex proffers a variety of touristy shops and irrelevant charged “attractions” in addition to the spectacular coastal scenery and famous Land’s End signpost.
The B3309 coast road leads northeast 20 miles through St. Just to St. Ives. It took me a full hour to drive, full of switchbacks, single-track stretches and no more than 200 yards of straightaway the entire route. Down by the picturesque harbor at St. Ives I sat in the sun and munched a Cornish pasty for lunch (some things are obligatory). Threading back a dozen miles across the Penwith peninsula, it was a bright, sunny afternoon on the high ground. From the southern hillcrest, however, I could see all of Mount’s Bay below, still caked in dense fog. It began to burn off late afternoon as I hovered around Marazion to get pictures of St. Michael’s Mount.

Day 4 – Inland and Northeast to Dorset


Compared to yesterday, it was bright and sunny. Fog lingered on the moors this morning, as I hit the A30 northeast toward Exeter. On Bodmin Moor I paid a call at Jamaica Inn, of Daphne du Maurier fame, and at Launceston, ancient capital of Cornwall (that’s part of the story for next issue). After crossing the top of Dartmoor, at Exeter I turned east along the south coast route, passing from Devon into Dorset just before Lyme Regis.
Yes, for the past couple of years, I’ve frozen on my April wanders; not this time. Temperatures were in the mid-20s (read 75-80F) and the sandy beachfront curling around the Cobb at Lyme Regis was crowded with sun worshippers in great spirits. You might remember Lyme from The French Lieutenant’s Woman or Jane Austen’s Persuasion. It was late afternoon when I pulled into Dorchester and checked in at the King’s Arms. By mid April here, it is light until nearly 8:30, so there was plenty of time to get about taking pictures of Thomas Hardy’s hometown—the Casterbridge of his Wessex novels. And, lo, I found myself having supper at Wetherspoon’s The Royal Oak. 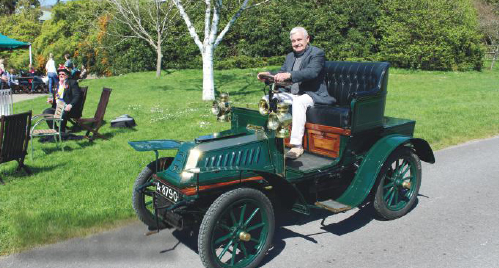 No, I didn’t take the wheel of this 1904 De Dion, but I did get a great ride around the Beaulieu estate.[/caption]


For yet another day, the south coast enjoyed summer sunshine and temperatures. It was glorious weather as I made the Wessex rounds that Hardy knew so well. Just a couple of miles from Dorchester, I visited Stinsford Church—the Mellstock of his novels, where Hardy’s family, two wives and heart lie buried. Up the road is the thatched cottage where he was born and raised. He wrote Far from the Madding Crowd here. East on the Isle of Purbeck, I visited magnificent Corfe Castle (or at least it was magnificent until the Parliamentarians laid siege and wasted it in the Civil War). For some reason, it was a much easier climb up when I first visited Corfe 20 years ago.
Through Wareham and Bere Regis, I threaded back to Dorchester to Maiden Castle. England’s largest Iron Age hill-fort was laid waste, too, but that was by the Romans. The Maumbury Rings and the Dorset County Museum gave me enough for the afternoon.


The weather held warm and bright once more as I turned north this morning, past the Cerne Abbas Giant to Sherborne. They announce it as the prettiest town in England. I haven’t been to them all, but Sherborne must be a serious contender. I pottered about the farmer’s market, visited dramatic Sherborne Abbey and the ruins of Sherborne Old Castle, yet another slighted by the Parliamentarians in 1646. Then I followed the A357 south through Blackmore Vale—Hardy’s Valley of the Big Dairies. The novelist lived here in Sturminster Newton for two years after his marriage, and wrote Return of the Native here. I took late lunch stop in the Georgian market town of Blandford Forum before turning east toward Hampshire and the New Forest. It was late afternoon when I landed in Lyndhurst, “Capitol of the New Forest” and, after some search, found myself at the Pennyfarthing B&B Hotel in a room named Unicycle. 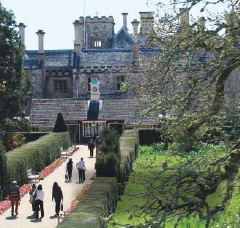 The monorail at Beaulieu gives a great view of Palace House, home of Lord Montagu[/caption]


Toddling around the New Forest is always a delight. I drove down to Brockenhurst and threaded my way to the village of Beaulieu. For most folk though, Beaulieu means the home of Lord Montagu Many attractions in Britain describe themselves as a good “day out,” when a couple of hours will certainly do it. Beaulieu, however, is a full day indeed, the Montagu estate includes the magnificent National Motor Museum, the remains of 13th-century Beaulieu Abbey and the Montagu family home, Palace House. Ride the monorail around the estate and take in the events of the day. Today, there was a colorful gathering of Morris Dancers, when five sides strutted their dances to an appreciative warm-weather crowd. I also got a ride in a 1904 De Dion that regularly takes part in the London-Brighton Veteran Car Run every November. That evening, I spent at the Fox & Hounds pub for a great supper of smoked haddock and chorizo fishcakes, and a trio of young musicians playing classic covers most readers would recognize.


I eschewed the motorway to thread through Romsey for Winchester. Long a favorite historic city of mine, I spent several Sunday hours in an unexpectedly busy city center (I blame the great weather). A stroll along the River Itchen, elegant Winchester Cathedral, a bustling pedestrian High Street, the Great Hall of Winchester Castle: the time passes too quickly. Then, I followed the A31 to Chawton for some photos of Jane Austen’s House and scenes of her life in the village. It’s a visit I’ve paid many times. In the next door market town of Alton, lo, I discovered The Ivy Tree, a Wether-spoon’s just opened a month ago, for a late Sunday lunch of roast beef. I ended the day in Basingstoke, about which there is not much to say.


About time in London, I often say little. Sandra Lawrence says much. I had a great dinner rendezvous with Sandra, Sian Ellis and James Graham, and tended the business-of-the-business. All right, in all fairness, I did have meetings at the Tower of London and the Houses of Parliament, but that’s another story.