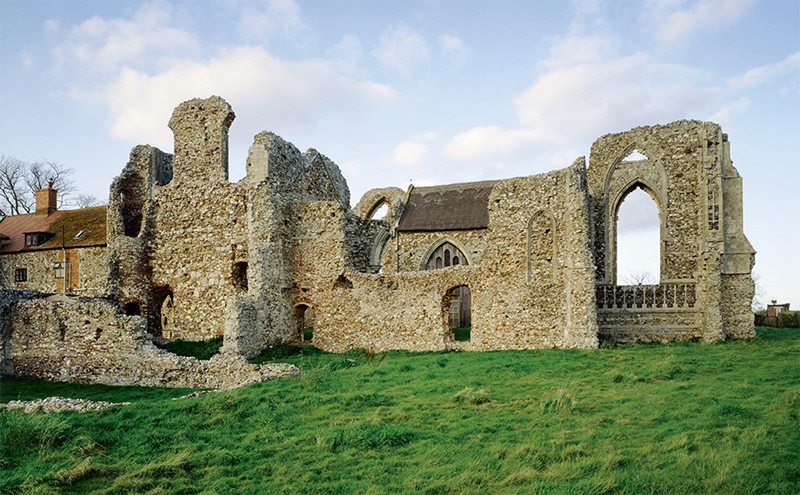 Leisurely and Eclectic Under the Painters’ Sky


For as close as East Anglia’s proximity is to London, the region remains often overlooked by American heritage travelers. Yet, the fascinating counties of Essex, Suffolk and Norfolk have a distinctive character and history, expressed in architecture and language, geography and custom. Follow a road rarely taken on this easy coastal adventure from the Thames to The Wash.

Day 1: East Through Essex to Southend


From the M25 or central London, take the A31 east along the northern side of the Thames. Make for Southend-on-Sea where the river opens into the North Sea. One of England’s oldest working-class seaside resorts, Southend has became the last refuge of East London Cockneys. Take a train to the end of the longest pier in England and enjoy the sights of the estuary.
If you’re a confident UK driver, thread across the flats on the back roads north through Maldon and Tiptree to the A12 and Colchester. If you would rather stick to the A roads, route via the A130 and Chelmsford. The oldest town in Britain, Colchester was the first Roman capital, settled by Emperor Claudius and his legion back in ad 49. Two-thirds of the 1st-century Roman town wall remains standing—the oldest in Britain. Check out the museum at Colchester Castle, rich in history and built on the foundations of the Temple of Claudius. Just a few miles north of Colchester, between the A137 and A12, sits Dedham Vale. This is Constable Country, the river valley setting made famous by landscape painter John Constable. Visit Flatford Mill scene of some of his most famous paintings. From here, art lovers might want to detour west to the market town of Sudbury for overnight. This is Thomas Gainsborough’s hometown. Or continue north for the overnight at nearby (and larger) Ipswich. There are plenty of options in both towns. 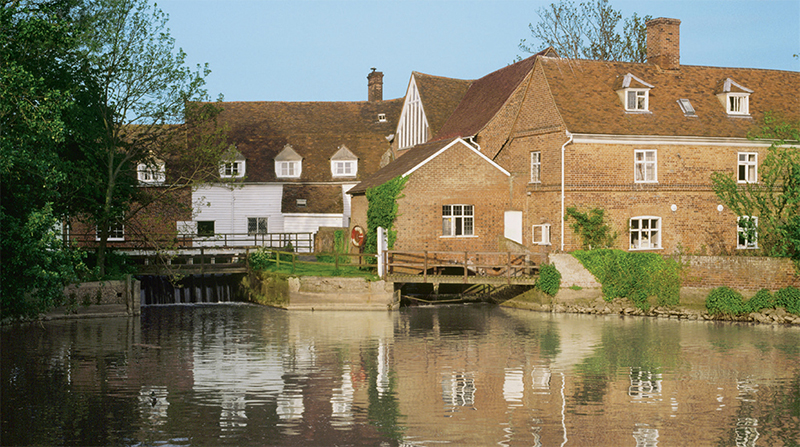 
Day 2: Along the Suffolk Coast


In Sudbury this morning, visit the Gainsborough Museum at his home. In Ipswich, visit Tudor brick Christchurch Mansion, whose art collection includes both Constable and Gainsborough paintings. Eventually, rejoin the A12, which follows north just inland from the North Sea coast. Turn coastal on the A1094 to Aldeburgh. This is the weird Suffolk Coast (British Heritage, January 2015. p.26). Do make a stop at Snapes Maltings on the River Alde. The old malting complex is now a bevy of shops and concert site of the annual Aldeburgh Festival founded by composer Benjamin Britten, who made his home here. To the south, you might visit Orford Castle, once owned by the original of Shakespeare’s Falstaff. To the north, check out the House in the Clouds in Thorpeness (on the cover of our January 2015 issue). Nearby, Leiston Abbey’s complete and tidy ruins offer a particularly good perspective on medieval communal life. Compact and personable, with plenty of dining and accommodation options, Aldeburgh makes a good overnight—perhaps at the classic Went-worth Hotel right on the beach. Or return to the A12 and continue about 25 miles north on the coast to slightly livelier Southwold, replete with appropriate travel services. 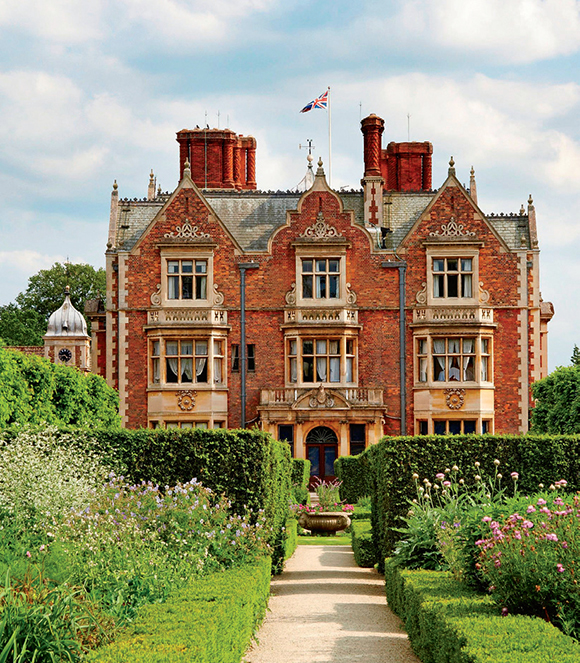 Unlike most royal residences, Sandringham Estate is the personal home of The Queen.[/caption]


At the home of Adnam’s Brewery, fans can take a morning brewery tour (one of Southwold’s popular draws). The beach town is known for its colorful beach huts and its working lighthouse. At a return to the A12, the parish church at Blytheburgh is an unsung gem, a surprisingly large and light medieval parish church, and open to visit. Then, it’s a dozen miles north to the harbor town of Lowestoft, most easterly point of Great Britain. Once a major fishing port, now the town is known for its beach, seaside holidays and shopping. Continue on into Norfolk for overnight in Great Yarmouth, part working port, part faded seaside resort. Wander the beachfront where Dickens wrote and set part of David Copperfield, or visit Anna Sewall’s home, author of Black Beauty and St. Nicholas, another of the country’s grandest parish churches. There are a range of seaside accommodation and traditional entertainments.

Day 4: Over the Norfolk Broads


Over the northeast corner of East Anglia threads the waterway system known as the Norfolk Broads. This interconnecting system of six rivers, shallow peat ponds and linking canals gathers more than 300 miles of navigable waters—once used for moving goods and materials to and from the ports of Great Yarmouth and Lowestoft. Now, The Broads are a popular venue for leisure travel, from day-trippers to holiday cruisers on a week’s exploration. The lowlands and marshes are replete with waterfowl and conservation centers. Rent a riverboat (Broads Cruiser) and set off. There are plenty of riverside pubs and boatyards for tie-ups at night, or just anchor on a sheltered riverbank. Follow the A149 across Broadlands. Stop at Hickling Broad to find the story of these shallow, medieval lakes. Detour to the small towns of Horning and Wroxham, “Capital of the Broads.” Alternatively, you might choose to route inland, following the A47 through the River Yare valley 20 miles to Norwich, Norfolk’s ancient cathedral city. Visit majestic 13th-century Norwich Cathedral, the medieval warren of Tombland and Elm Hill and England’s largest open air market. Turn north to the coast on the A140. Either way, the overnight destination is Cromer, a seaside resort town since the early 1800s with a classic Victorian pier and plenty of accommodation. 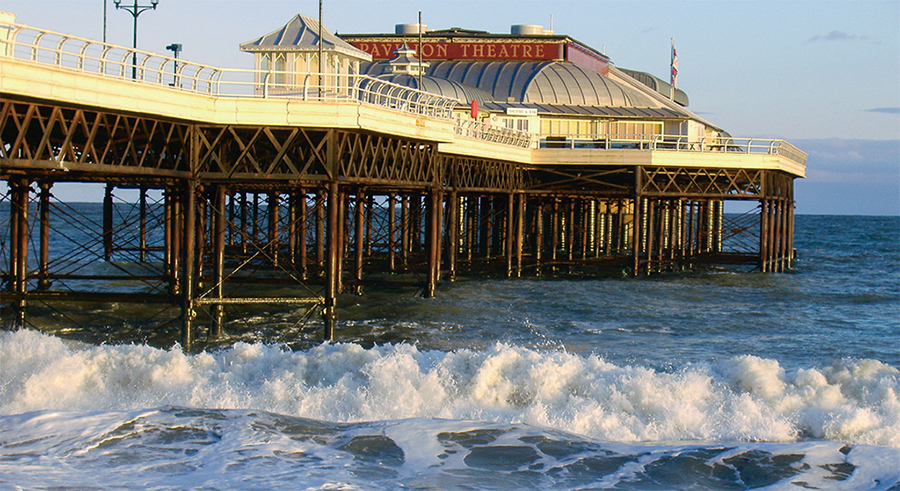 Jutting off the North Norfolk coast, Victorian Cromer Pier is a classic of the genre.[/caption]


The A149 is now the coast road west today. Four miles along from Cromer is neighboring Sheringham, similar in size, trim and more sedate. Then a succession of pretty villages trail along the coast. You might plan a visit to Holkham Hall; the 18th-century stately home is regarded as one of the finest Palladian mansions in the country. Another colorful stop is the workshops and fields of Norfolk Lavendar in Heacham. Or visit the Queen’s own estate and home, Sandringham. You’ll find plenty of other detours and diversions along the way. That’s the glory of a roadtrip!

Day 6: Into the East Midlands?


The natural conclusion to the East Anglia coast is the old port town of King’s Lynn, where the River Ouse drains the fens into The Wash. You might take a stay in King’s Lynn, or continue around The Wash into Lincolnshire to Boston. Turning inland, take the A47 across the fens to Peterborough and a visit to historic Peterborough Cathedral.


It’s a relatively small percentage of overseas visitors that make their way to East Anglia, despite the region’s riches of wildlife and history. If there is such a thing as an undiscovered treasure in Britain, however, it surely must be the Norfolk Broads. One of the most memorable family holidays we spent when my now young adult children were kids was a week on the waterways of this fascinating network of rivers and canals. More than 300 miles of navigable water in a network of six rivers left plenty of Norfolk to explore by boat.

Broads Cruisers, specially built for these waters, are comfortable cabin cruisers sleeping anywhere from two to a dozen. We set out from Wroxham on the River Bure in a fully-equipped boat complete with galley, three cabins and a Great Room with a sliding canopy to cruise open to the sky. The gentle pace of 4-6 mph makes it very easy to handle the boat. My twins, Taylor and Miranda, were nine at the time, and both took turns at the helm (under Dad’s watchful eye, of course). Ducks and coots swam blissfully in the rippling wake as we passed fields and farms, marshes and the Broads themselves – shallow lakes created centuries ago by the digging of peat.

Despite that idyllic backdrop, the days are as full and active as you choose. Pull up to visit Berney Arms Windmill; stop to explore a Norman village and resupply at the village shop. Sail into the Norwich Yacht Basin just behind Norwich Cathedral for a day in this lovely medieval city. At night, moor up at one of the many boatyards, or at Reedham Ferry (among many other spots) for an evening in the pub. Or just hook up along the river bank to watch the stars descend over East Anglia’s Painters Sky.

It’s a warm memory, and an experience I would love to do again. And it’s a lot less work and more comfortable than the better known waterway adventure with a narrowboat on the canals.