Our Sceptered Isle: To the Great Beyond and North Yorkshire

With colorful and customary detours along the way


The weather was classically English autumn throughout my seasonal editorial pilgrimage—rain, shine, rain and shine—changing sometimes abruptly in 10 minutes half a dozen times a day. The quest for stories and photos to share with inquiring BHT readers this fall led me north in an 800-mile circuit to the cold North Sea coast of Yorkshire. As I customarily invite every few issues, do come along on the adventure.

DAY 1 – Shake the Dust in Northampton 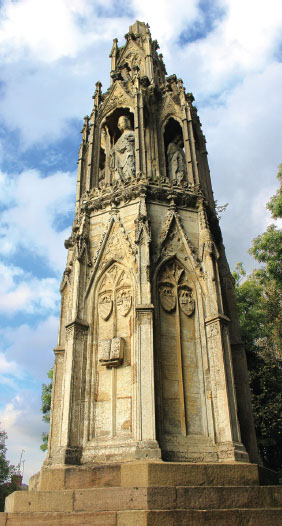 ALL PHOTOGRAPHY BY DANA HUNTLEY

The 13th-century Eleanor Cross in Hardingstone is one of three of the original 12 still standing.[/caption]

AFTER A LATE MORNING landing at LHR, I slogged around the M25 up to the M1 heading north for a first night in Northampton. Craving any excuse to get off the M1, I did make a couple of stops along the way, first paying a call in the small town of Olney. Famed for its ancient Shrove Tuesday Pancake Race, Olney was the parish church of Rev. John Newton, author of “Amazing Grace.” Together with his close friend, 18thcentury pastoral poet William Cowper, they wrote what was published as The Olney Hymns, many of which are still sung in Protestant churches across the world. Newton had quite a story to tell.

In Hardingstone, near Northampton, stands the only surviving Eleanor Cross that I’d never seen. Of course, it wasn’t well-signposted and took a bit of playing ring-around-the-roundabout, but it stands open beside the road. In 1290, Queen Eleanor of Castile, wife of King Edward I, died near Lincoln. Her body was taken to London for burial in Westminster Abbey. It was a 12-day journey. The King erected elaborately decorated memorial crosses marking each of the 12 places the funeral procession stopped overnight. Hardingstone is one of only three that survive. Northampton itself is a place more traveled through than traveled to—in my case, to shake the fatigue of travel before heading into the Midlands.

DAY 2 – To Retford and the Pilgrim Villages


IT WAS A BIT of zigzagging north today to the border between Nottinghamshire’s Robin Hood Country and the agricultural plains of Lincolnshire. Here in the district known as Bassetlaw events in the first years of King James I’s reign brought together Dissenting individuals and families from several villages to form what became the Mayflower congregation. Just off the A1, I stopped in delightful Grantham for lunch. Long a favorite of mine, the ancient market town was a coaching stop on the Great North Road. The well-known Angel & Royal preserves one of the most typical coaching inns in England. Grantham was also hometown to Isaac Newton and Margaret Thatcher.
A coaching stop further north, Retford made a central stay between the Pilgrim villages of Babworth and Scrooby. That story will await the next issue.

DAY 3 – To Sturton-le-Steeple and Chatsworth 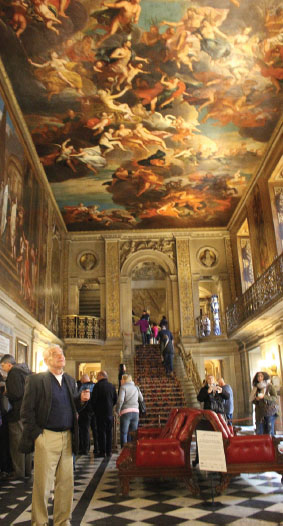 ALL PHOTOGRAPHY BY DANA HUNTLEY

I am (rarely) in the foreground, awed at the painted ceiling in the entry hall at Chatsworth[/caption]

THERE WAS ONE MORE Pilgrim village to visit at Sturton-le-Steeple, but I was ahead of schedule. A quick reference to the AA Motoring Atlas offered several attractive suggestions. It had been at least a dozen years since I visited the “Palace of The Peaks,” however, and I headed for an afternoon at Chatsworth—half an hour drive to the west through Worksop and Chesterfield into the Peak District National Park. Ancestral family seat of the Duke of Devonshire, Chatsworth is quite simply one of the grandest two or three treasure houses in Britain. Sitting in 3,000 acres of parkland and home farm, the 200-room mansion contains a jaw-dropping wealth of art and treasures from across the centuries and the world. While Downton Abbey’s age has passed, Chatsworth still requires a household staff of 800. They said it would take a fit young adult more than two hours to walk the 104-acre garden. I rode.


A GRAY AND RAINY Sunday greeted my drive up through the relatively nondescript countryside of North Lincolnshire this morning. Before hitting the Humber Bridge, I stopped in Brigg and took a nourishing large cappuccino at a Costa on the deserted pedestrian High Street in the rain. The young staff was delighted to explain Brigg’s claim to fame—the Brigg Horse Fair. Britain’s second largest gathering of Romani and Irish travelers has met here in early August to trade horses since at least 1238. These annual fairs are always colorful, to say the least, and attract thousands of participants and spectators.

Just ahead, the Humber Bridge was the longest single-span suspension bridge in the world when it was opened in 1981. It is still impressive, spanning 7,283 feet high over the Humber River near Kingston upon Hull. Welcome to the East Riding, obviously the eastern of vast Yorkshire’s three historic subcounties or ridings. Directly east of the bridge on the A63 lies the city known simply as Hull, with a population of 270,000, by far the largest community in the otherwise largely agrarian riding.

DAY 5 – The Rainbow at Hull


MY PURPOSE in visiting Kingston upon Hull is self-evident in our cover story. In truth, despite having passed over that bridge on occasion, I’d always successfully managed to avoid Hull itself, whose reputation has been rather grim, industrial and largely destroyed by World War II bombing. Hull’s historic Old Town center, however, remained largely spared and has been polished to a fine luster for its year in the City of Culture spotlight. It was a fun stay and fun story to write!


NORTH OF HULL, the market town of Beverly has a Georgian air, but its crown is Beverly Minster, the massive Gothic collegiate church larger than many English cathedrals. Then, it is 30 miles northeast across farmland to meet the North Sea coast at Bridlington. From there near Flamborough Head, the A165 leads north along the gorgeous Yorkshire coast, where the clouds lie low and the green fields and indented rocky coastline stand out against a deep blue sky. Follow the route in pictures in my photo essay on p. 64.

DAY 7 – Over the North Yorkshire Moors 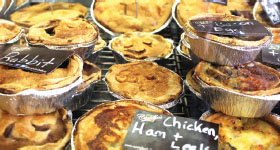 6
TO THE WEST lie miles of wasteland—the North Yorkshire Moors. I crossed the bleak moorland blanketed in heather, bracken and gorse on the A169 from the harbor town of Whitby to Pickering. You can take the same route on the North Yorkshire Moors Railway behind a steam locomotive.
I paused for lunch on the market square of pretty Malton—Yorkshire steak pie with mash and gravy—at family-run (and cooked) Calabrese. Then, all roads lead to York, political and ecclesiastical capital of England’s North since the time of the Romans.


ON THE SPEAKING of York, there is no end. It’s one of my favorite destinations, where a microcosm of English history blends seamlessly within the medieval city walls. And the city is pedestrian-friendly and very walkable. On this occasion, however, my object was a story on the National Railway Museum, adjacent to the magnificent York Station. This, too, shall wait. York Minster and the Castle Museum are world-class visits as well, but there are days of worthy attractions, shopping and theater in York. This is a place you return. 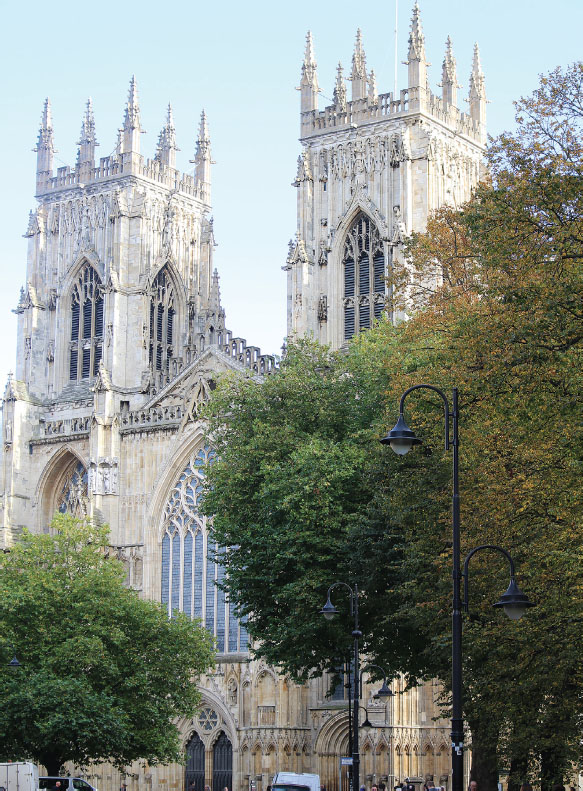 6
The largest Gothic cathedral north of the Alps, magnificent York Minster contains the biggest expanse of medival stained glass in the world.[/caption]


DRIVING FROM YORK south to metropolitan London in a day is reasonable on paper, but not much fun in practice. Both the M1 and A1(M) are heavily trafficked and as high-speed as the traffic will allow. It’s tiring driving, requiring complete focus from the most experienced drivers.

Leicester broke the journey nicely. I’ve paid a couple of visits in our coverage following the 2012 discovery of Richard III’s bones, but I had not seen the misfortunate king’s final resting place in Leicester Cathedral. The tomb of Richard III has become a major attraction for visitors to the working-class Midlands city. Leicester has done a magnificent job of rebuilding and adapting its medieval cathedral neighborhood to its new celebrity and guests.

And so on to a finish in the Thames Valley and Windsor, very familiar to me as a home neighborhood in England for 30 years now.

Report from the Pub 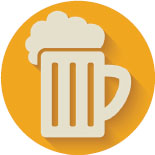 6
MY CUSTOMARY GAUGE of the dialog in the marketplace and source of neighborhood knowledge—ye olde local pub—never faileth. There was some banter about our inexplicable presidential election campaign, but not as much as I expected. Most folks readily admitted they just didn’t understand the quirky Americans.

The Brexit conversation has quieted too. Again, the general attitude is that the matter is decided and they just want to get on with it. The nitty-gritty details and bickering with the EU will continue, though, to occupy news space and media coverage virtually daily for years. And there remain uncertainties over the long-term economic and diplomatic outcomes.

IN THE MEANTIME, the British pound continues at historically low levels against the dollar and remains a great value. It’s time to start thinking of spring and summer British travel. Of course, as always, we are delighted to have you along with British Heritage Travel! Maybe I’ll head for the coast of Kent and hope for spring sunshine.