The History of Osborne House 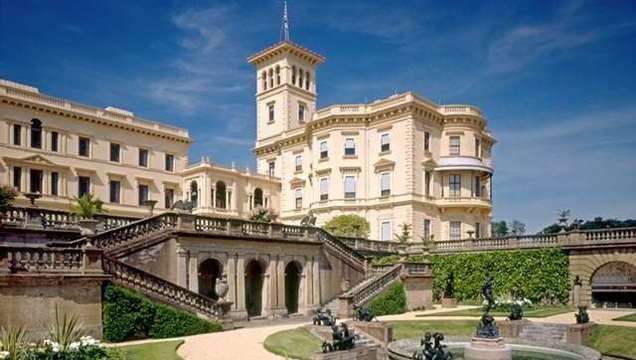 It was Queen Victora's summer home, but what else do we need to know about Osborne House?

As the ferry from Portsmouth crosses the Solent and approaches the bucolic Isle of Wight, the creamcolored façade of Osborne House, reminiscent of an Italian villa with its picturesque flag and clock towers, terraces and gardens, appears ahead. This is the same view that can be seen within the house in a watercolor painted by a 13-year-old Prince Alfred, one of Queen Victoria’s nine children, and presented to his mother on her birthday in 1858.

The British define a Victorian house as any house built during the reign of Queen Victoria, which spanned the years from 1837 to 1901.Osborne House epitomizes that era. After purchasing the house and land with their own funds in 1845, Prince Albert, the Queen’s consort, worked closely with Thomas Cubitt, the architect responsible for the design of some of London’s neighborhoods (especially Belgravia), to demolish the existing structure and build a home that Victoria and her family could use as a retreat during holidays and vacations. After the premature death of Prince Albert, Queen Victoria spent more and more time at Osborne House; it became a sanctuary for her after the loss of her beloved husband. 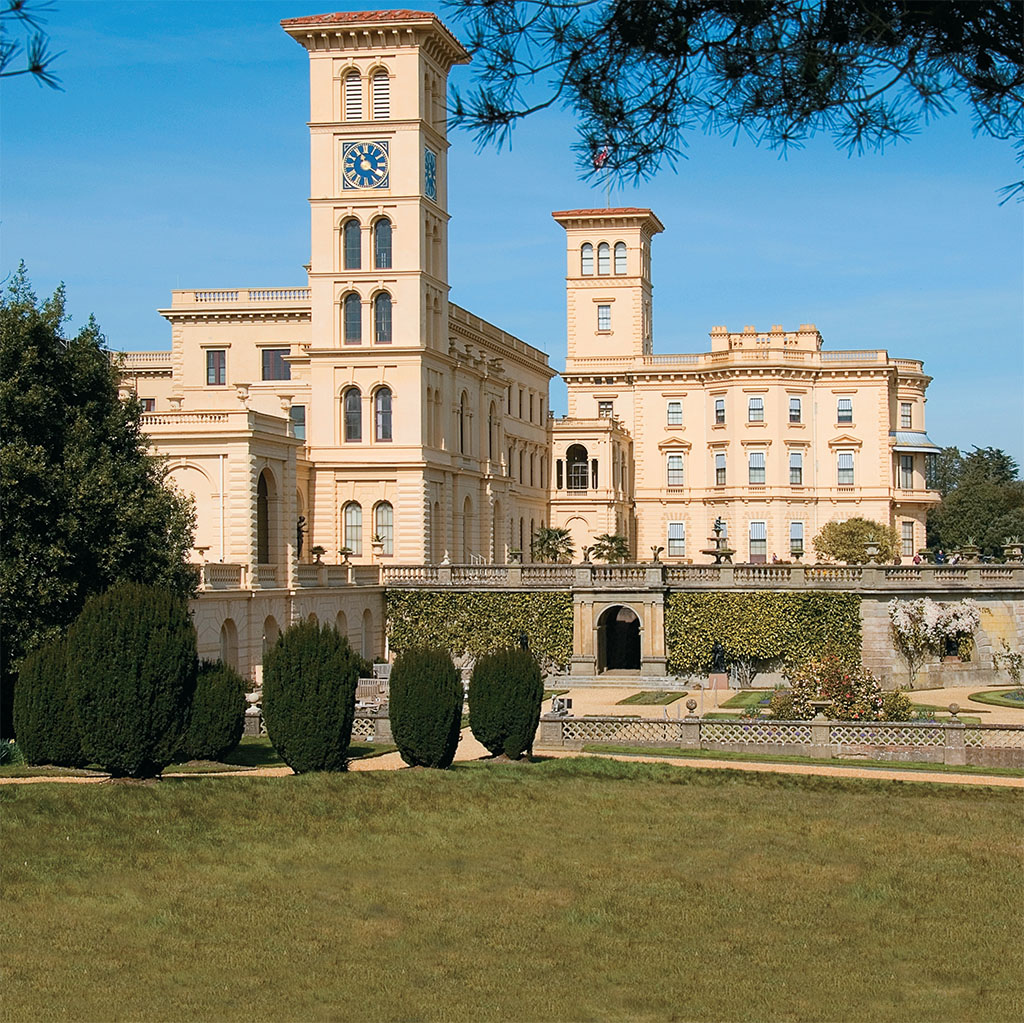 Enter through the old household entrance, flanked by classical statues, into what was a dining room for the servants in the 19th century. While this room now contains an interesting introductory exhibition about Osborne House, the rooms beyond have been preserved as they were when the Royal Family lived in them - to tell the story of the era and the family.

Thanks to Prince Albert, the house was built with many “contemporary” innovations, including the early use of cast iron beams to fireproof the home and underfloor heating in his private bathroom.

Osborne House is symmetrical with many windows making it light and airy within. The house, consisting of three connecting buildings and various wings, is built around an open courtyard whose upper and lower terraces contain flowerbeds, statues and a large fountain. These terraces, again created under Prince Albert’s supervision, offer sweeping views to the sea about a mile away, and are a reminder of his love for Italy.

The ornately adorned Grand Corridor wraps around the courtyard in Italianate style and offers access to the various rooms. This elaborate passageway, like most of the house, is filled with paintings and white marble sculptures reflecting Victoria and Albert’s love of the arts. These particular sculptures were made by living British and European artists of the time, and most were specifically commissioned by the Royal couple. 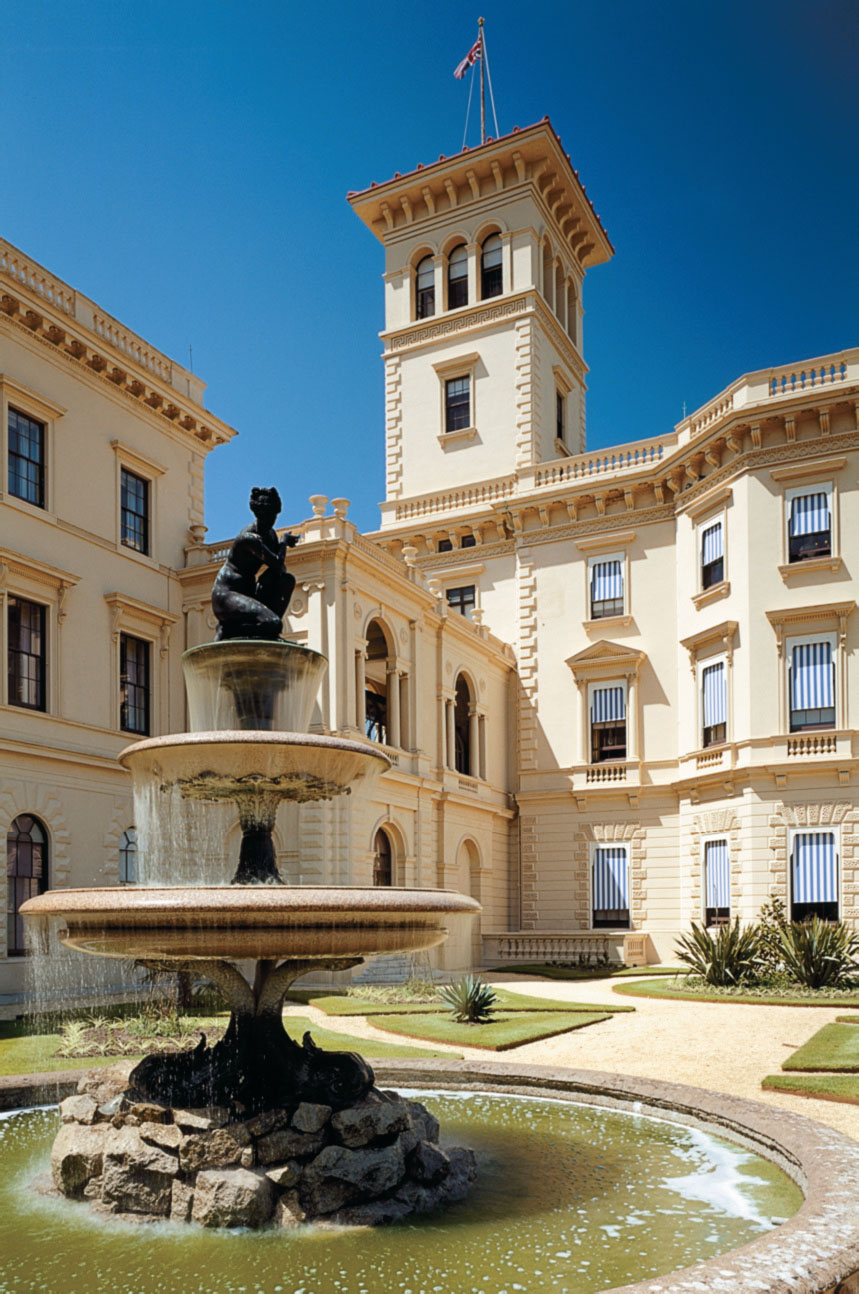 The dining room, drawing room and billiard rooms on the ground floor, each with an elaborately painted ceiling, are all richly decorated with family portraits and other works of art. In the dining room, a table displays place settings being laid for dinner, each place perfectly arranged.

Prince Albert, who enjoyed playing billiards, designed the elaborate painted billiard table to be built higher than usual so that the Queen and other ladies could play without having to bend over in a manner inappropriate for the Victorian era. Also on the ground floor is a rather odd room that contains furniture completely made with the antlers of different animals. In this strange room, the well-known haunting painting by Edwin Landseer of the elderly Queen in black on a horse held by her servant John Brown is on display.

Visitors get the most intimate look at the Victorian royal family in the private rooms on the first floor that Prince Albert and the Queen used on a daily basis. The Prince Consort’s bathroom, dressing and writing rooms as well as the Queen’s bedroom and sitting room are on this floor. These rooms are modest in size and give some idea of the cozy and comfortable lifestyle that the Royal family enjoyed at Osborne House. Furniture covered in patterned chintz upholstery typical of the Victorian era fill the rooms.

More portraits of the Queen’s immediate and extended families as well as paintings done by Victoria, Albert and their children line the walls and rest on table tops. Time seems to have stood still in the Queen’s bedroom as it has been kept the way it was on January 22, 1901, the day of her death. Albert’s portrait rests on the pillow on his side of the bed and the bag for his watch hangs above it. After her husband’s death in 1861 at the age of 42, the Queen always kept these two items next to her in bed. 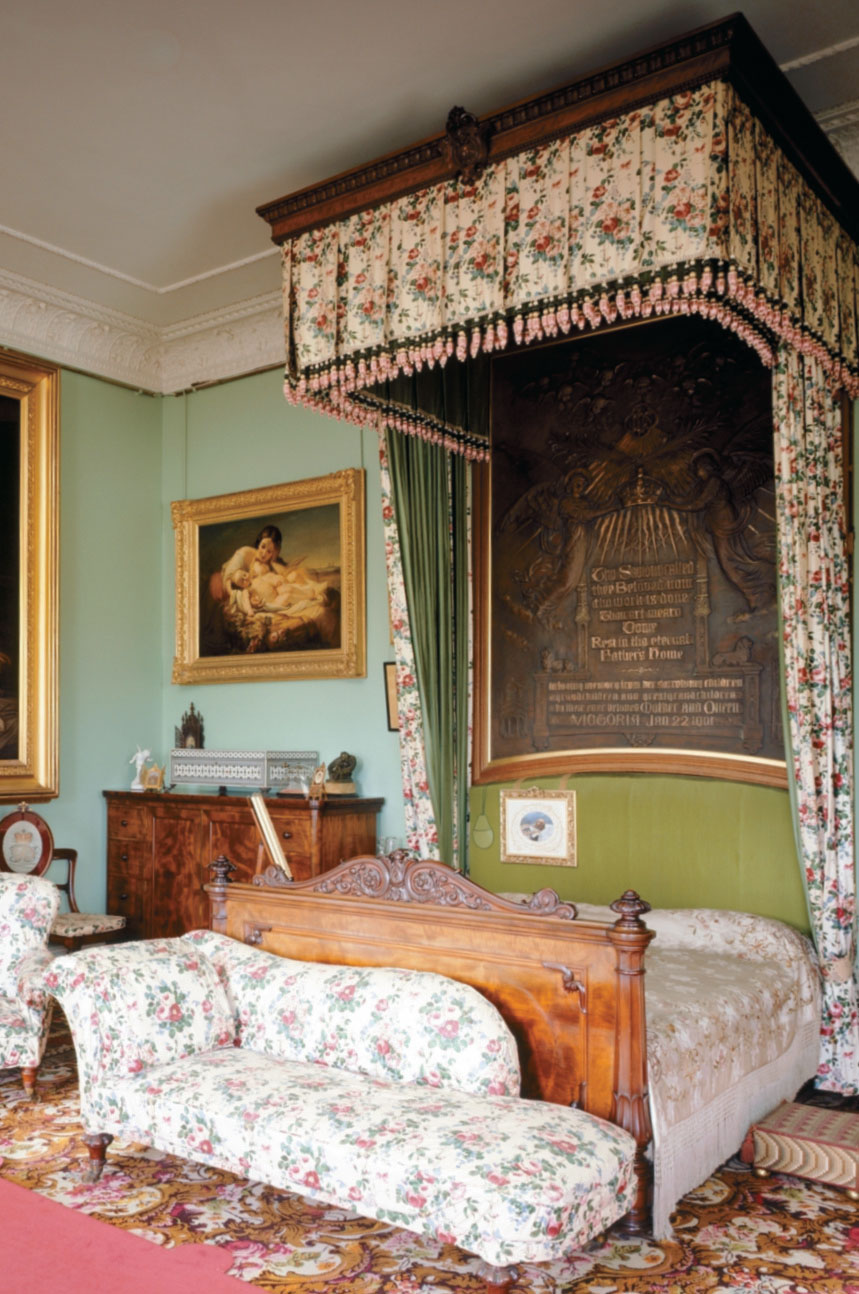 The Queen’s bedroom remains just as it was when she died there in 1901. Prince Albert’s watch still rests on her bedside

The nursery, conveniently located on the second floor, allowed Victoria and Albert to reach their children easily from their rooms below. Portraits of the children hang on the nursery walls, children who as adults married into many of Europe’s Royal families and made their own marks in history.

One of the more unique rooms is in the low two-story addition built in 1890-91 to house the Durbar Room. The name “Durbar” comes from the Indian and denotes a state banquet and the room where such an event would be held. This room celebrated the Queen’s title “Empress of India” that was bestowed in 1876, and provided Osborne House with a formal banqueting hall, which it had not previously had. Every visible inch of the Durbar Room is richly covered in molded ornamentation designed by Bhai Rom Singh, an Indian artist, and his teacher Lockwood Kipling, the father of the author Rudyard Kipling. In the center are cabinets full of elaborate gifts from India.

Also on the estate, though some distance from Osborne House itself, is the Swiss Cottage where Victoria and Albert wanted their children to learn the basics of housekeeping and cooking. This miniature Swiss chalet is filled with child-size furniture, and a thatched shed outside contains gardening tools with the initials of the various princes and princesses, who used them to cultivate their assigned individual plots of land.

English Heritage, entrusted with the care of Osborne House, rents out the Pavilion Cottage, a converted cricket clubhouse built just after the Queen’s death and the end of the Victorian era in 1901. Once the estate is closed to visitors for the day, short-term renters staying at the Pavilion Cottage can explore the grounds in privacy—including the Queen’s private pebble and sand beach that was opened to the public for the first time only in 2012.

In Victorian times, the Isle of Wight became a fashionable holiday destination simply because of the Queen’s frequent residency at Osborne House. Lots of water traffic on the Solent signaled that the Queen was at home. Centuries later the Isle of Wight still attracts visitors. London is home to the superb Victoria and Albert Museum, but it is Osborne House that allows a personal look into the lives of the Royal couple. 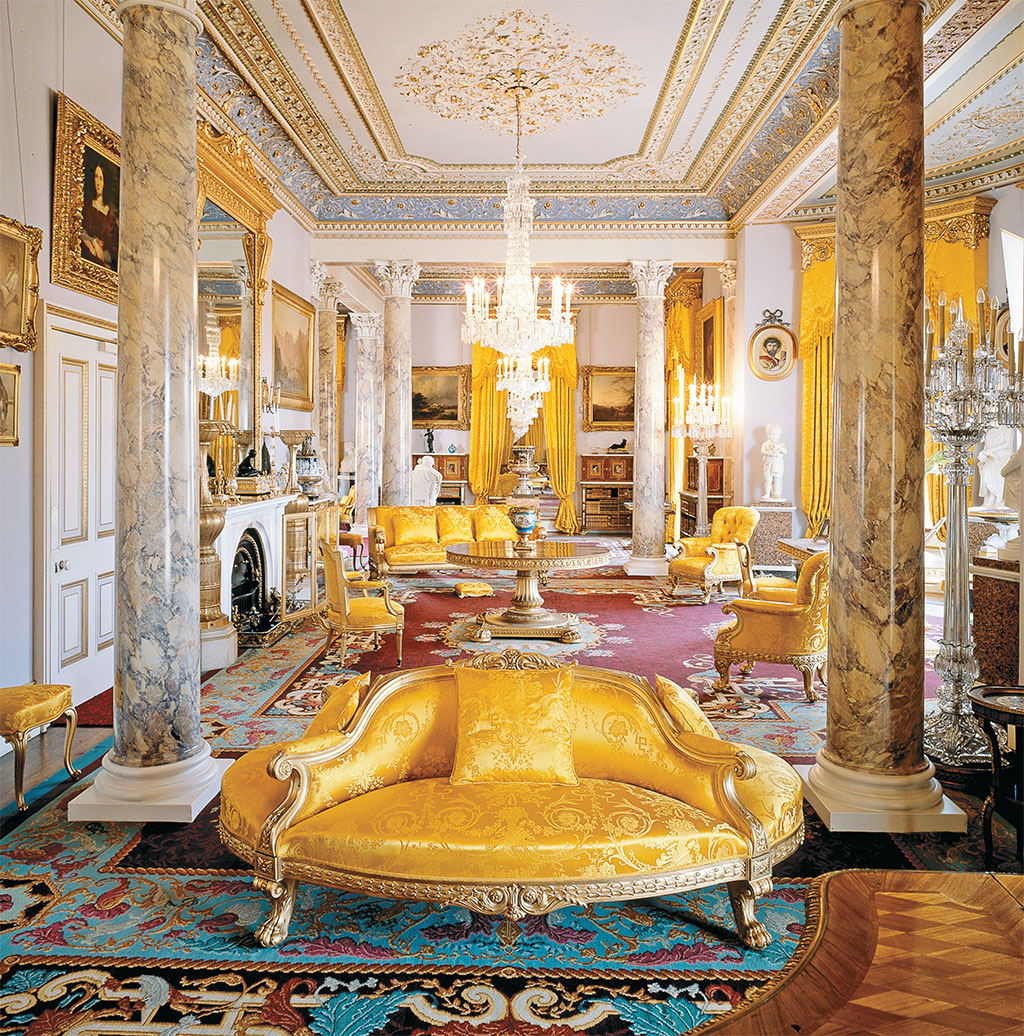 Like most rooms in the home, the Drawing Room is modest in size and reflects the Queen and Prince Albert’s love of the arts.[/caption]