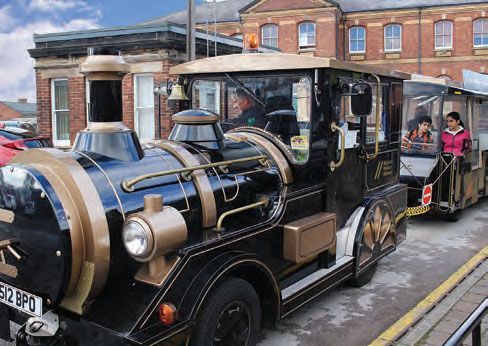 For generations, the rail network throughout the island has been the principal form of public transportation, and remains so today. Train stations and platforms, travel posters and tea trolleys, anticipation and the exhilaration of arrival have all been part of the British experience from earliest memory. As fashions and technology change with the generations, those memories turn nostalgic for the more innocent, if mythic, past of summer train excursions to the seaside, Christmas visits to kin or the goodbyes of leaving for school. Railways themselves have a huge popular following across the country. At a score of heritage railways from the South coast to the Cairngorms, trains are maintained (principally steam) and run excursions along coasts, through valleys, over moors and mountains for leisure travelers. Most of these historic lines are principally staffed by volunteers and hobbyists—for the love of rail.
Serious trainspotters, nostalgia buffs and rail enthusiasts of all varieties, however, find their lodestar in York’s National Railway Museum, which unabashedly proclaims itself World’s Greatest Railway Museum. And it probably is. That Great Britain has an official national museum devoted to rail travel aside, its location in York is a natural.
The historic city, traditional capital of England’s North Country, has been an important rail center since the 1800s, midway on the East Coast Main Line between London and Edinburgh. York’s beautiful wrought-iron Victorian rail station, right across the street from the medieval city walls, was the largest in the world when it opened in 1877. A long footbridge connects the station to the Rail Museum in rail yards and roundhouses to the back.

Whether you arrive in York by rail or car, however, do look around York Station on your visit. Its glass and iron vaulted roof sheltering more than a dozen platforms looks very much, and just as impressive, now as when it was the wonder of the Victorian railroad world.
The Railway Museum is simply a wonderland of trains with free admission. How they assembled the vast and varied components of the museum is difficult to comprehend. The Warehouse alone, open for exploration, contains more than 750,000 rail-related objects and artifacts. It’s accurately described as an Aladdin’s Cave of railway history memorabilia—platform and station signs, dinner services, art deco rail posters (by the thousands), competition trophies, model trains; the list goes on impressively.
The Great Hall is a roundhouse filled with locomotives spread around the gigantic turntable representing every era of train travel, from a model of George Stephenson’s Rocket to the state-of-the-technology Japanese bullet train (the only example outside of Japan).
The pride of the historic collection might be the famous Mallard, which set the steam train world speed record of 125.88 mph in 1938 on the East Coast Main Line track near Grantham. Though Mallard is maintained in operating condition, its days on the track are complete. You can, however, relive its 1938 record-breaking run in the Mallard simulator.
The newcomer creating buzz in the collection is the Flying Scotsman, which arrived in 2016. Its display is still a work in progress. Among the most moving exhibitions is the Ambulance Train. Such trains staffed with nurses carried wounded and dying soldiers home from the front through the carnage of World War I. It must have been heartbreaking work.

The adjacent hall, called simply The Works, is just that—a workshop large enough to tear down and rebuild locomotives. From broad balcony viewing areas, visitors can watch restoration work in progress. Here, too, are displays on signaling works, and an outside balcony overlooking the very active tracks emerging from York Station.
For many people, however, the Station Hall provides the greatest interest with its social history of rail travel. It’s the story of station life and the experience of rail travel itself. Climb aboard historical carriages from third class to first class—and above. Royal carriages include those of Queen Victoria, King Edward IV (complete with comfortable smoking saloon) and King George V, all suitably furnished and equipped in regal style.
On the platform adjacent to the royal carriages, take refreshments or lunch created from Yorkshire produce at the informal Dining Car restaurant in surroundings inspired by a Victorian dining car. For a more elegant experience, have a classic afternoon tea in the opulent décor of the Countess of York carriage in the courtyard.

7
Outside in the South Yard, operating locomotives go through their paces on active rail lines. A miniature railway offers rides around the yard and a children’s play area. In addition to a predictable range of train-themed gifts and souvenirs, the comprehensive shop near the main entrance includes a wide variety of railway literature and a range of model train sets by Hornby and Bachmann.
It does take a good half day to do justice to the Railway Museum. If several hours of fascinating gawking is enough on your feet, you might take the road train at the front entrance (fare 2 GBP) on the quick five-minute ride to York Minster in the city center. Departing by train does seem somehow quite appropriate.

WHILE YOU’RE IN YORK


It would be a shame to visit the National Railway Museum and not see some of magnificent York. Those 13th-century city walls enclose one of Britain’s richest historic cities, in a walkable, pedestrian-friendly environment. York Minster, the Castle Museum, Jorvik Viking Centre, as well as the Railway Museum, anchor a score of museums and attractions dating back to when the Romans named the city Eboracum. Take a boat ride on the River Ouse or visit Ye Old Starre Inne, oldest pub in the city. Unpack it all at visityork.org.

VISIT A HERITAGE RAILWAY NEAR YOU


There are heritage rail lines running excursions on well-maintained vintage rolling stock in every part of the island. Here is a sample of popular lines to keep an eye out for in your travels. Each features a unique and memorable scenic route.

Bluebell Railway, Sheffield Park, East Sussex Opened in 1960, the Bluebell was the first heritage steam railway to carry passengers. Running across the pretty Sussex Weald to East Grinstead, the appropriately named line is at its most gorgeous in the spring—with the gardens of Sheffield Park as well. bluebell-railway.co.uk

West Somerset Railway, Minehead, Somerset Britain’s longest steam heritage line at more than 20 miles, the West Somerset Railway runs from Minehead on the Exmoor coast to Watchet, then turns south through Exmoor and the Quantock Hills to Bishops Lydeard near Taunton.
westsomersetrailway.vticket.co.uk

Romney, Hythe & Dymchurch Railway, Hythe, Kent Travel the south coast from Hythe to Dungeness on the train famously known as Kent’s “mainline in miniature.” The one-third-full-size steam and diesel trains have been carrying passengers along Romney Marsh for 88 years. rhdr.org.uk

Ffestiniog Railway, Porthmadog, Gwnyedd From the harbor of Porthmadog, steam on this pristine narrow-gauge railway into the mountains of Snowdonia National Park to the slate mining town of Blaenau Ffestiniog. For more than 100 years, the line carried slate to the coast instead of visitors.
festrail.co.uk

North Yorkshire Moors Railway, Pickering, Yorkshire The busiest steam heritage line in Britain carries nearly 400,000 passengers a year across the moors on a line to Whitby, first opened in 1836 by railroad pioneer George Stephenson to carry goods to port. nymr.co.uk