The Pilgrim and Puritan Heritage

America’s colonial history begins on the broad fens and plains of East Anglia and Lincolnshire. In the early 17th century, men and women who sought freedom of worship apart from the established church made their way to New England. Here is a colorful and diverse itinerary in the footsteps of such colonial founders as John Cotton, John Winthrop, Thomas Hooker, Anne Hutchinson, Thomas Paine, William Bradford, William Brewster and John Mason.

Day 1–On the Road to Cambridge


From either London or the airports, head for the A12 (junction 28 on the M25). Our route leads to Chelmsford, birthplace of Thomas Hooker, the founder of Connecticut, and on to Braintree, where the local museum details its American colonial links. Continuing north, the village of Groton, a few miles east of Sudbury, was the birthplace of John Winthrop, the leader of the flotilla that led to what became the New World’s Boston and first governor of Massachusetts Bay Colony. Then, you might visit picturesque, medieval Lavenham and the ancient cathedral city of Bury St. Edmunds before continuing on along the A14 to Cambridge. As a student town, Cambridge offers a wide variety of accommodation options. The 4-star Devere University Arms and the 3-star Best Western Gonville are hotels superbly located for exploring the town. You might begin browsing at www.visitcambridge.org, which also offers a wonderful introduction to the sights and attractions of the neighborhood.


At this ancient university, Puritan and Separatist conviction found its intellectual underpinnings. You will hardly need much coaching for a day in this beautiful university town. This morning you might take a walking tour of the ancient university: Trinity Great Court, King’s College Chapel and 800 years of architecture and tradition. It was at Emmanuel College that many of the leading Dissenters and Puritans were educated. Explore the historic colleges and Backs along the meandering River Cam, visit the acclaimed Fitzwilliam Museum, and discover the bookstalls, museums and shops.

Day 3– An Excursion to Norfolk


If you have the day, take an excursion northeast to Norfolk. It’s an easy drive up the A11 to Thetford, where Thomas Paine was born and educated, and Hingham, where Puritans (including Samuel Lincoln, ancestor of Abraham) left in the early 1630s to found Hingham, Mass. 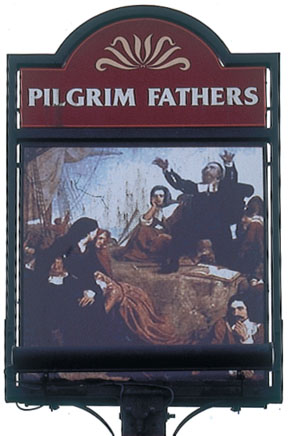 Continue on to magnificent Norwich (see “A Day to Visit” in our last issue). Highlights of the medieval city include 13th-century Norwich Cathedral, England’s largest open air market and quaint, cobbled streets winding from the River Wensum to the Castle Meadow.

Day 4–Around the Wash to Boston


We leave Cambridge this morning. A route up the A10 will lead to nearby Ely. The tiny city’s cathedral is a great visit. So, too, is the home of Oliver Cromwell, MP, brilliant Civil War cavalry general and leader of the Puritan Commonwealth until his death in 1657. Stay on the A10 north to the port of King’s Lynn, birthplace of John Mason, who received the New Hampshire grant. The Puritan rector took immigrants from here to found Lynn, Massachusetts in 1636.
This afternoon we visit the market town of Boston. From St. Botolph’s Church, the “Boston Stump,” John Cotton spurred the migration that became Boston, Mass. His pulpit still stands, and a stained glass window commemorates the sailing of the first flotilla under John Winthrop. In the Guildhall, the jail cells remain; visit where the Pilgrim Fathers were imprisoned and tried for attempting to leave the country in 1607. In nearby Fishtoft, a monument at Scotia Creek marks that Pilgrim’s first aborted effort.

Known as the Boston Stump, St. Botolph’s tower can be seen for miles across the flat fens.[/caption] 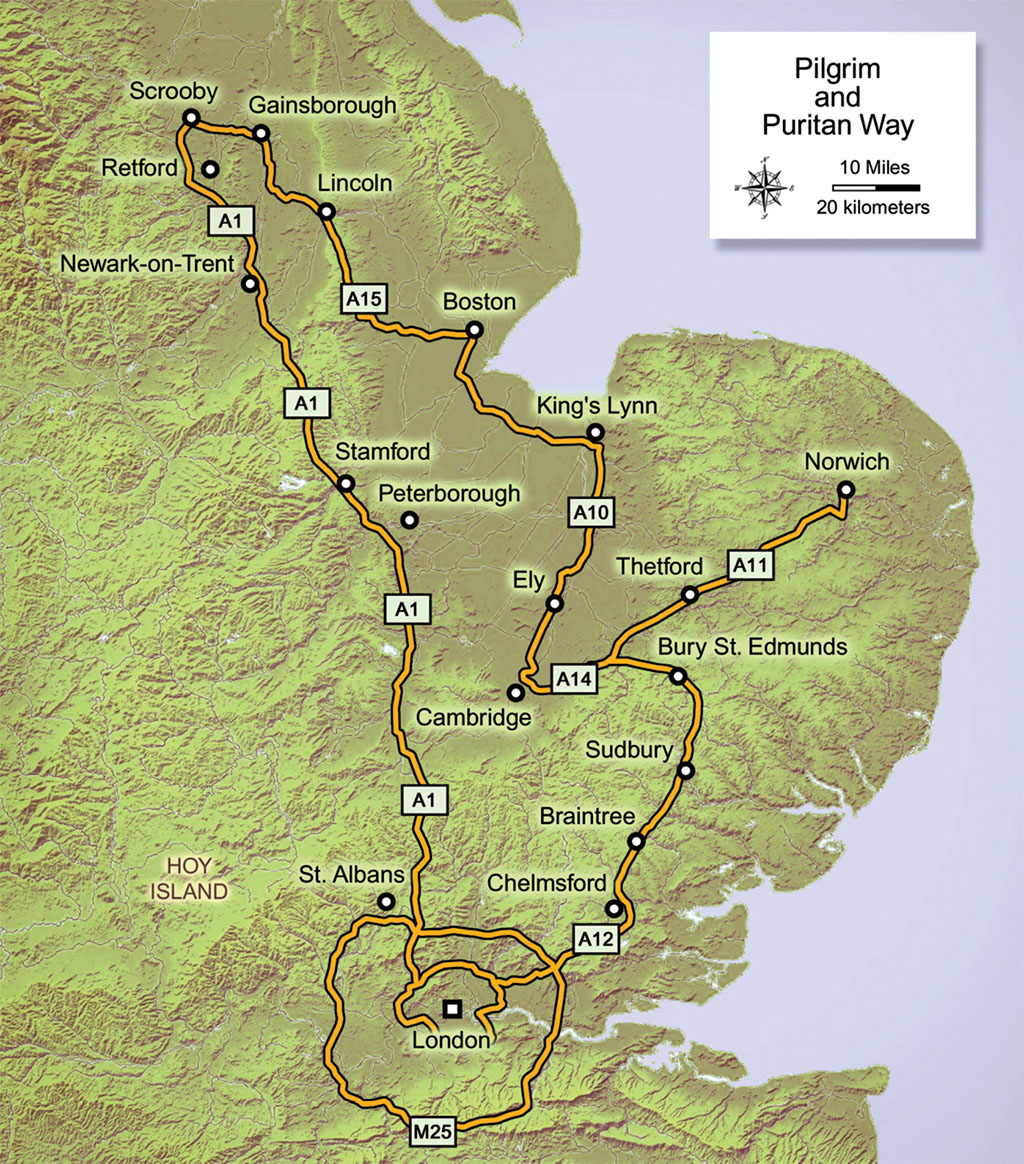 The A15 leads north to the cathedral city of Lincoln—a terrific place to make a base for exploring. There are a variety of accommodation options, including the classic 3-star White Hart Hotel, near the TIC in the forecourt of Lincoln Cathedral, and the more modern Lincoln Hotel around the corner on Eastgate.

Day 5– Lincoln and the Wolds


This morning, explore the beautiful cathedral city of Lincoln. Built over a span of centuries, impressive Lincoln Cathedral is the third largest in Britain and one of the best visits. You won’t get a full view of the cathedral’s magnificent west front until you cross the cobbled precincts to the curtain wall of Lincoln Castle. While the castle has had many functions over the years, do visit the chapel of the old Victorian prison. From the parapets and walls, the view over the surrounding Lincolnshire fens is spectacular. Don’t stay on top of the hill all morning, though. Appropriately named Steep Hill hosts a plethora of interesting specialty shops and great places for snacking or lunch.
This afternoon, you might take an excursion east toward the coast, to Alford, birthplace of early colonial poet Anne Hutchinson. Take the A158 and turn north on the B1196. If the timing is right, you might visit 17th-century Alford Manor House, reputedly the largest thatched manor house in England. It is generally open to the public Tuesday and Friday afternoons. www.alfordmanorhouse.co.uk If time permits, carry on to see the old Lincolnshire seaside resort of Skegness.

Day 6– The Roots of the Pilgrims


Today, we explore the roots of the Pilgrim congregation. Take the A57 east to the A638, then turn north to Retford. A detour of just a couple of miles on the A620 will bring you to Babworth and Richard Clyfton’s parish church—where the Pilgrims first became a congregation. A few miles north of Retford on the A638 is the village of Scrooby. You can walk through a farmyard to see the remains of Scrooby Manor, where William Brewster re-formed the Separatist congregation after Clyfton was thrown out of his living at Babworth for his Puritanism. You might take lunch at Scrooby’s Pilgrim Fathers pub. A few miles farther on lies the village of Austerfield, birthplace of William Bradford. Head east from Bawtry a dozen miles to Gainsborough on the A631. A highlight of the day is a visit to the medieval manor of Gainsborough Old Hall, where the Separatist church met secretly after being outlawed in 1604. www.gainsborougholdhall.co.uk It’s an easy return down the A156 to Lincoln.


Needless to say, there are many adventures within striking distance of Lincoln. The castles, manors and hospitality of Hidden England and Rutland (see “Your Passport to Hidden England,” November 2010) lie immediately to the south along the A1. If you’re returning to London or the airports, the A1 is the most direct route—down to the M25. To the west a score of miles lies Nottingham, Sherwood Forest and the land of Robin Hood and D.H. Lawrence.