On Track Across to Get London

Crossrail, designed to make travel across London faster and easier, is just months away from taking passengers through central London. James Graham will be on the platform to see the first trains arrive.


The first thing to get straight about the 60-mile railroad line that will pierce the center of London when it fully opens next year is what be its name will be. During its planning and construction stages, the line has been known as Crossrail. Once operational throughout in 2018, it will be known as the Elizabeth line, after Great Britain's longest - serving monarch. Based on an idea proposed as long ago as 1943, after many years of planning and development work, Crossrail broke ground in May 2009 at Canary Wharf. Then Mayor Boris Johnson and Transport Secretary Lord Adonis drove the first pile into the North Dock in Docklands at the site of the new Canary Wharf station.
The Elizabeth line's route stretches around 60 miles and will join Reading and Heathrow in the west across to Shenfield and Abbey Wood in the east. Elizabeth line trains will stop at 10 newly-built and 30 newly upgraded stations and carry some 200 million passengers annually. As a 21st-century rail line, travelers can expect on-board customer information systems delivering real-time travel data, free Wi-Fi on trains and platforms and access to 4G. The modern stations have all been planned with 21st-century passenger needs in mind. This means that all 40 Elizabeth line stations will be step-free.
The trains are a new, handsome and contemporary design. Modeled on the walk-through design seen in London on the Overground coaches and the new Thameslink stock, the 660-foot-long trains can carry 1,500 people in nine coaches. Seats will be a mixture of metro-style and bay seating. The service will be high-frequency, with 24 trains per hour in each direction planned to run through the central section at peak times. With a train every two to three minutes, the service will offer an Underground frequency.


London's archaeology normally lies some 30 feet below the surface. The Elizabeth line's tunnels in central London are up to 120 feet below ground. To reach these depths, constructors have passed through this archeological seam and dug deep into London's past. The line's construction has resulted in one of the most extensive archaeological programs ever undertaken in the UK.
More than 200 archaeologists have uncovered more than 10,000 objects from 40 locations, spanning 55 million years, from prehistory to the present day. The objects have moved the historical spotlight from early geological changes to the habits of Roman London, the DNA of the Great Plague and Black Death and beyond. Some 500 archaeological objects discovered on the project went on display this summer at a free exhibition staged at the Museum of London Docklands.
Jay Carver, Crossrail lead archaeologist, said: “The construction of the Elizabeth line, east to west through London, has given us a once-in-a-lifetime opportunity to explore some of the capital's most historically significant areas.” 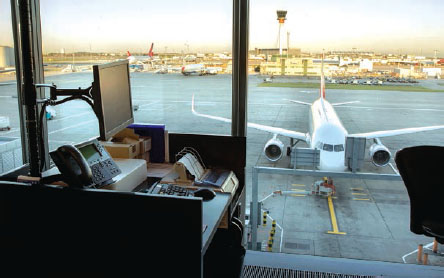 Journeys across London from Heathrow are jumping into the 21st century.[/caption]


To Get Across Town


The reason billions of pounds and thousands of man-hours were spent constructing the Elizabeth line can be traced back to the mid 19th century. Railroad promoters and speculators rushed to lay down lines from their city or town to connect with London, then the greatest city in the world. The result was around 20 mainline railroad termini, and generations of headaches for travelers who wished to travel across the capital. The American concept of a convenient “Union” station rarely caught on in Britain and certainly not in London. Passengers who wished to transit the capital were unceremoniously dumped with their luggage and left to find their own way across the metropolis. Underground railroads and bus services were soon launched to fill the gap between the and the start of the next.
It was not until Thameslink began in May 1988 that the metropolis acquired its first surface rail line that allowed passengers to cross the capital. Thameslink transports passengers from the Midlands and north across London to the south coast and vice versa. Its popularity and passenger number provided the launch pad for the east-west Elizabeth line.
Crossrail 2 is a proposed further rail link connecting southwest to northeast London vital to providing extra capacity in the capital to cope with London's growing population. Construction might start as soon as 2020.


Digging railroad tunnels in the 21st century means there are no picks and shovels to be seen. Instead, Crossrail used eight tunnel-boring machines (TBMs) to construct the new rail tunnels on a 24-hour, seven-day-a-week rota. Each measured around 492 feet in length. 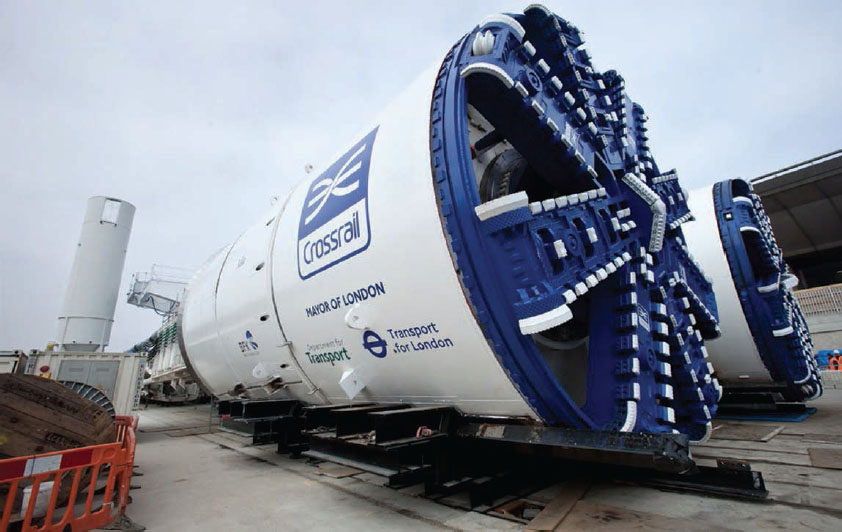 Forget the picks and shovels. Tunneling 120 feet below ground, “The Girls,” mammoth tunnel-boring machines, work in tandem 24/7 deep under the capital.[/caption]

According to tunneling tradition, a TBM cannot start work until it is given a name as a sign of good luck for the project ahead. The TBMs operated in pairs to deliver the eastbound and westbound tunnels for each of the tunnel sections, so they were named in pairs.
Named by members of the public, the first six machines celebrate historical London fig-ures, while the final two machines were named after modern-day heroes.
• Ada and Phyllis:  Ada Lovelace was one of the earliest computer scientists and is regarded as having written the first computer program.  Phyllis Pearsall single-handedly created the London A-Z.
• Victoria and Elizabeth: Named after the eponymous Queens.
• Mary and Sophia: Mary was the wife of Isambard Kingdom Brunel, while Sophia was the wife of Marc Isambard Brunel.
• Jessica and Ellie: Jessica Ennis-Hill and Ellie Simmonds were British gold medalists from the London Olympics and Paralympics 2012.

Ends of the Line


While the Elizabeth line has been designed as a better way to get into the center of the city and to traverse it west to east, it will open up areas of London and the surrounding area to explore. The line connects four points. London Heathrow will be very familiar to BHT readers, but what of the other ends of the line?
Reading in Berkshire is a major destination in its own right. With a population of around 156,000, the city has much to recommend it. It will also be a perfect station at which to connect with Great Western Railway (GWR) services to the West Country, Bath, Bristol and south Wales. Moreover, it will offer great connection from those locations to the Elizabeth line.
In the city is the Museum of English Rural Life. It is Britain's leading museum of food, farming and the country-side. It has reopened following a £3.3 million redevelopment program. Since 1833, Reading Museum has been telling stories of the local historic and natural environment as well as displaying and caring for objects from around the world. The museum's collections span the famous Roman eagle from Silchester to the capital from Reading Abbey and an amazing collection of Huntley & Palmer biscuit tins.
Part of the London boroughs of Greenwich and Bexleyheath, Abbey Wood is about 10 miles east of Charing Cross. Its main attractions are the ruins of the 12th-century Lesnes Abbey and the Red House in Bexley-heath, the home of William Morris.
Shenfield is a commuter suburb of Brentwood in the Essex borough of the same name. A short taxi ride will deliver the BHT reader to Kelvedon Hatch Secret Nuclear Bunker. It was secret home of the British government and military commanders in the event of a nuclear attack during the Cold War. 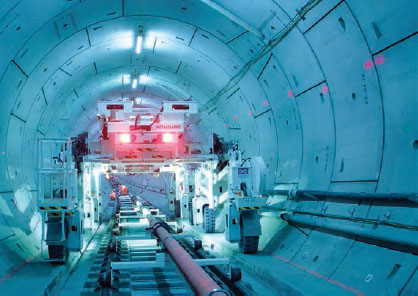 The tunnel and its tracks are just the beginning. Signaling and ventilation systems, lighting and power lines follow “The Girls” as well.[/caption] 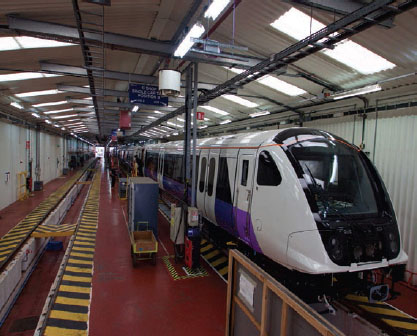 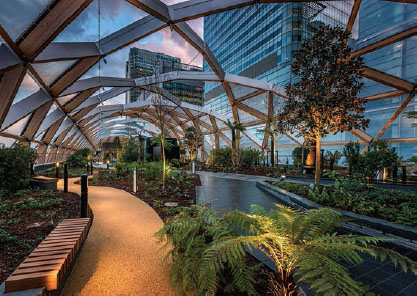 The most progressed of Crossrail's 10 new stations, Canary Wharf offers a glimpse of 21st-century train travel in London's immediate future.[/caption] 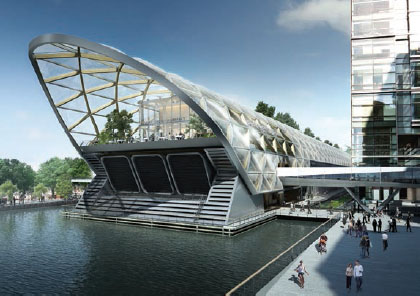 
The Elizabeth line is not the only part of London's transport infrastructure named after the reigning monarch. The Underground's Jubilee line was named in 1977 to mark the Queen's silver jubilee that year. Heathrow Terminal 2 is officially known as the “Queen's Terminal,” but does not carry her name. The Queen Elizabeth II Bridge takes motorists over the Thames on the M25 motorway.
Some 30 years ago, British Rail claimed it was “The Age of the Train.” Now, with the Elizabeth line, London is entering its 21st-century Age of the Train. Next stop, central London. 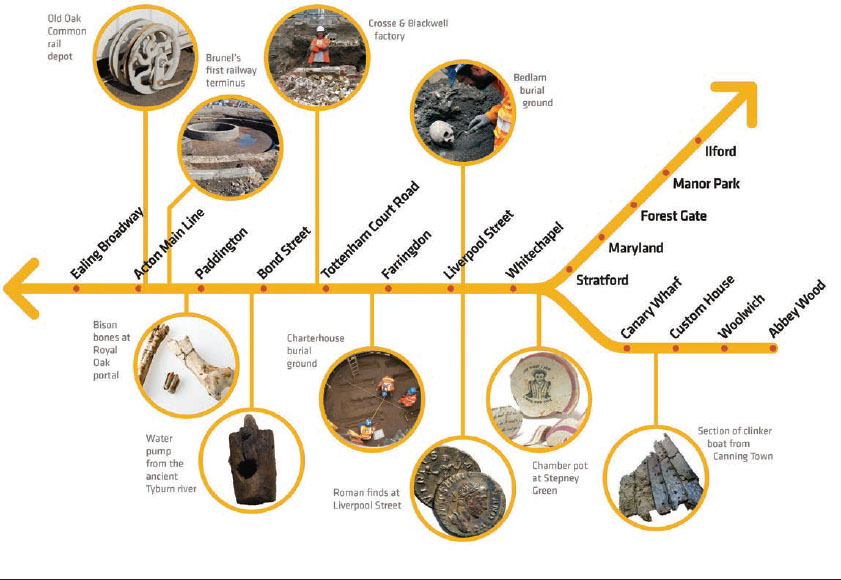 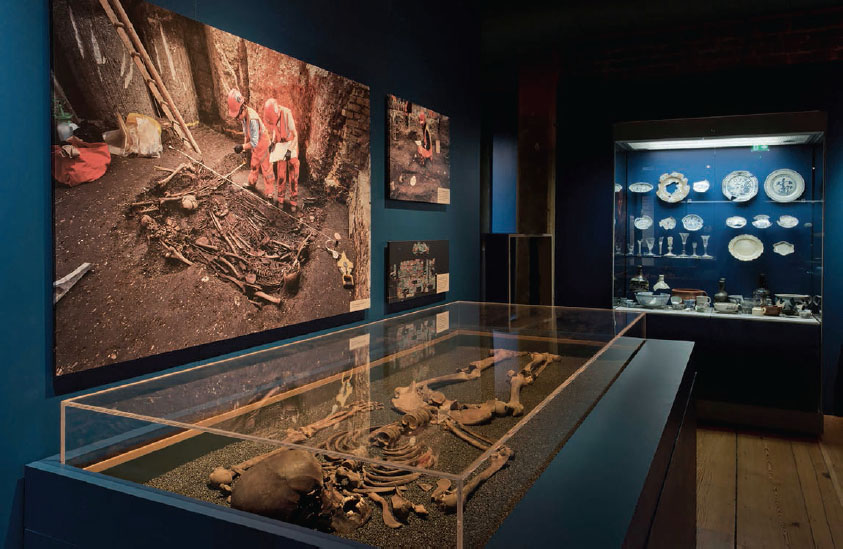 A byproduct of Crossrail has been perhaps the greatest archaeological dig in history—with results on display at the Museum of London Docklands.[/caption]


Full Speed Ahead for HS2


In February 2017, after three years of parliamentary scrutiny, HS2 received Royal Assent. Construction has now started on what will be the world's most advanced passenger railway.
From 2026, passengers will be using high-speed trains between London and Birmingham; services will travel onward to such places as Manchester, Glasgow, Liverpool, Preston and Wigan. From 2033, the high-speed network will go into the centers of Manchester and Leeds and services will go on to places such as Darlington, Newcastle, and Edinburgh. 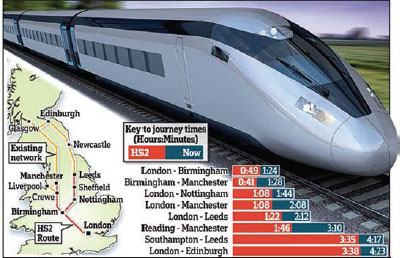 Is Prince Charles planning on sc...

Reports have emerged that claim Prince Charles is planning on scali...

Is Prince Charles planning on sc...

Reports have emerged that claim Prince Charles is planning on scali...