Deep in the Heart of England 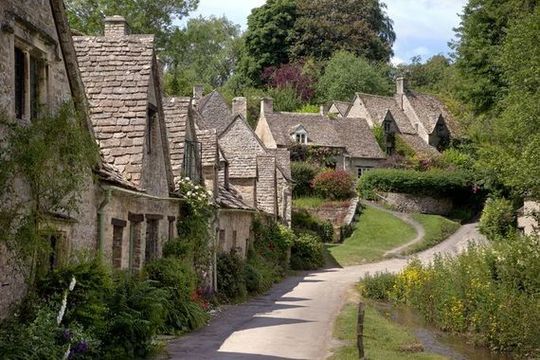 Deep in the Heart of England

Most people’s ideal image of the English countryside conjures up pastoral villages of stone cottages, hedged by gentle, rolling farmland and sprinkled with trim historic market towns. That is, most people think of the Cotswolds.

The largest of Britain’s Areas of Outstanding Natural Beauty,  the Cotswolds are a modest escarpment of limestone hills from Bath to the Midlands, occupying Gloucestershire and Worcestershire. Its limestone yields honey-colored stone villages, towns and farms. With a natural beauty garnished with 2,000 years of history, the Cotswolds are among the most popular regions of Britain with visitors. Here is a beautiful road trip with easy travel times that is ripe with history and scenic highlights.

Take the Slow Road to Bath

From the M25 or London Heathrow, Bath is an easy two-hour drive west on the crowded M4. The scenic route is far more enjoyable. Getting out of metropolitan London on the M4, drop down to the A4 at Hungerford and follow the less crowded old London Road to the West Country. You might stop for coffee in pretty Marlborough, home of venerable Marlborough College (where Kate Middleton was a star). Country pubs and green fields lead on to Avebury and the mysteries of prehistoric barrows, Silbury Hill and Avebury Stone Circle–the largest henge of Britain’s 600 Neolithic monuments.

Fair warning. Bath is a popular visitor destination every season of the year, and for good reason. It is a wonderful small city to see by foot, and parking is tight in Bath, so a city  center base is highly desirable, even at a premium. Bath’s accommodation options are many, and this is a place you’ll want to have reservations ahead. You might begin at the superb Tourist Centre on the square adjacent to 15th-century Bath Abbey for local maps, current events, tickets and brochures. You might start exploring at www.visitbath.co.uk.

Two fascinating and history-rich eras of England’s past–17 centuries apart–find their most complete expression in the beautiful city center. This is a fun city.

Bath’s natural hot springs drew Romans by the legion for 300 years. Do visit the incredible Roman Bath and Temple complex just around the corner, below today’s bustling pedestrian piazza. It was ancient when the Pump Room was built atop the Roman resort in the 18th century. Not bathing in, but drinking the mineral waters for therapeutic reasons became all the rage, and in the mid- and late-1700s, Bath exploded to become the social capital of England outside of London. The classical Georgian architecture of Bath’s boom years gives the city its character today. Take a walk up Milsum Street with Jane Austen’s heroines to the Assembly Rooms, the Circus and the Royal Crescent. The Georgian house at 1 Royal Crescent illustrates the way of life for Bath’s affluent residents in its heyday.

Visit perhaps the famous Fashion Museum at the Assembly Rooms, the Holbourne Museum of Art or any of a dozen museums unpacking the city’s history and life. Bath is also known as a shopping town. Shop for modern goods or prowl for antiques in the alleys around George Street. For a classic Bath experience, take afternoon tea at the Pump Room and perhaps sample the warm spring mineral water that spurred Bath’s 18th-century popularity or the famous ‘bunns’ at Sally Lunn’s historic eating house, one of the oldest houses in Bath.

For an evening, the beautiful Theatre Royal nearly always has something on. Restaurants and pubs abound in Bath’s city center. The Huntsman and The Crystal Palace on Abbey Green are classic old pubs popular with visitors and locals alike.

Following the Romans to Cirencester

There is certainly enough to see in Bath to justify another day’s visit. If time has come to move on, however, head north today on the A46, then take the A433 into the idyllic countryside of the Cotswold Hills. Acclaimed Westonbirt Arboretum is a tempting stop with gorgeous woodland walks in any season. Tetbury, a classic Cotswold market town, makes a photogenic stop for morning coffee. North 10 miles, Cirencester, the unofficial ‘Capital of the Cotswolds’, combines history and charm–a perfect base for a Cotswold idyll.

Corinium Dobunnorum was one of the largest towns in Roman Britain, at a major crossroads on the Fosse Way. The site of its amphitheater has never been fully excavated, but the Corinium Museum is perhaps the country’s finest museum of Romano-British life. On the Market Place, the soaring medieval church of St. John the Baptist is one of the largest parish churches in England, built with the wealth of the Cotswolds’ medieval wool trade.

Sort out the many lodging options at www.cirencester.co.uk. For location and charm, The Fleece, which describes itself accurately as a “characterful” inn with cozy rooms, and the King’s Head Hotel are both hard to beat.

Today’s excursion is a Cotswold panorama that includes some of the region’s most iconic vistas and locales. Begin northeast this morning on the A429 to the village of Bourton-on-the-Water. Definitely and deservedly a popular tourist magnet, Bourton is barely less charming because of it. The River Windrush gurgles down the middle of the picturesque village High Street surrounded by shops, tea rooms and eateries. Visit the model village, the perfumery or the Cotswold Motor Museum.

From Bourton, the A429 climbs a ridge to the equally popular Stow-on-the-Wold. Even without stopping long, it’s worth driving around its streets a bit. Or chart a short spectacular detour through the villages of Upper and Lower Slaughter.

At Moreton-in-Marsh, turn west on the A44 a few miles to Broadway, named for its wide, long High Street. On many lists of the prettiest villages in England, here is another magnet for antique lovers. Just above the village, Broadway Tower affords unrivalled views over the landscape from the second highest point in the Cotswolds. The Tower was a countryside retreat of Arts & Craft artists William Morris and Edward Byrn-Jones.

From Broadway, take the A4632 toward Cheltenham. At Winchcombe, you might leave time for historic Sudeley Castle–a superb visit in a breath-taking setting. More Tudor mansion than castle, Sudeley’s award-winning gardens are a delight, and include the 15th-century church that is the burial place of Queen Katherine Parr.

Cheltenham is a grand Regency spa town that hosts a number of prominent festivals through the year. It is also a busy place and the road patterns and traffic are difficult. Pick up the A435 back to Cirencester and you are quickly in gorgeous countryside.

If you have energy this evening, perhaps visit with the locals at the Black Horse on the Market Place–Cirencester’s oldest pub.

Moving on, Perhaps to Oxford

If your time on the road has sadly run out, the A419 to Swindon can have you on the M4 to London in half an hour. With another day or two, you might turn north on the A429 for a morning visit at Chedworth Roman Villa, perhaps the most complete Roman country farmhouse and plantation complex yet uncovered, with magnificent Roman tiled floors and exhibitions.

A couple of miles north, take the A40 east toward Oxford. Along the way, Minster Lovell Hall’s historic ruins on the banks of the River Windrush are a great short stop, and the pretty market town of Whitney offers all the options for lunch, 15 miles from Oxford.

Time permitting, the ancient university city is an A-list destination to linger in. ■