From Constable Country to The Wash - discovering East Anglia 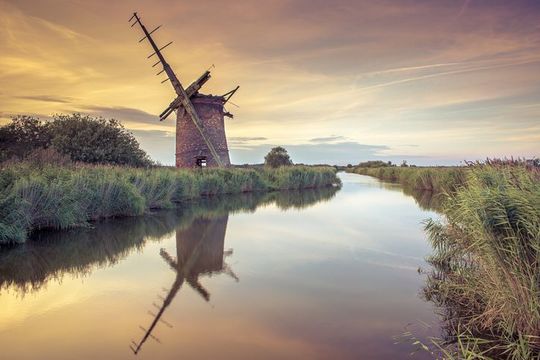 To the northeast of London, bulging into the North Sea, the ancient kingdom of the East Angles seems quickly a world apart.

Its flat, expansive landscape supports a historically agrarian economy, most famously sheep. The broad horizons yield what artists have long called a “painter's sky,” with extraordinary light and cloud formations.

Celtic, Roman, Saxon and medieval sites, artifacts and history abound. It is an easy adventure to explore this road remarkably less traveled.

Day 1 - Ipswich to Aldeburgh and Southwold

From the airports or central London, begin on the M25 to catch the A12 at junction 28 toward Colchester. Those with an interest in Roman Britain will perhaps pause in Colchester, the oldest Roman legionary fortress in Britain, to see the Roman town walls, Balkerne Gate and other evidence and artifacts of Roman life remaining in the fabric of the market town.

Or carry on toward Ipswich and jump off the A12 at junction 31 for a plunge into what is known as Constable Country, most famous of English landscape painters. East Bergholt, Flatford Mill, and Dedham Vale are among the most famous scenes of Constable's paintings. Follow the art theme to Ipswich and Christchurch Mansion to see works of Constable, Thomas Gainsborough, and Paul Munnings.

Ipswich has plenty of accommodation, history, and pubs to explore for an overnight. Alternatively, you might continue north to spend the night in the seaside town of Aldeburgh, home of composer Benjamin Britten. Or follow the art trail to Sudbury for overnight and a visit to Gainsborough's House, both birthplace and gallery of Thomas Gainsborough. 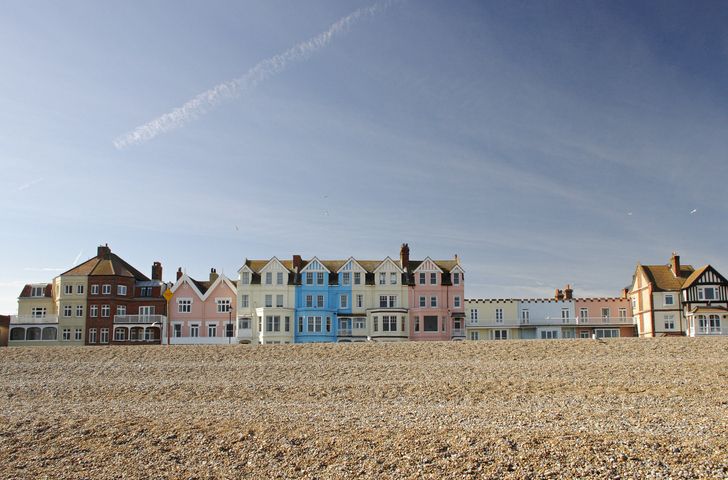 The colourful row of seafront houses in the popular coastal town of Aldeburgh, Suffolk, UK on a sunny spring day.

From whichever overnight stay you choose, make today for Bury St. Edmunds. On the A134 from Sudbury, you might allow time for stopping in Long Melford, famous for its antique shops. Bury St. Edmunds' deserving claim to fame is St. Edmundsbury Cathedral.

Though there has been a church here since the 11th century, the present Gothic Revival cathedral, begun in 1503, was rebuilt several times and only pronounced complete in 2005. Do take time to stroll a bit in the lovely Abbey Gardens just next door to the cathedral. Across the street, Dickens used to stay in the Angel Hotel.

Take the gentle way north to Norwich this afternoon on the A143 to Diss and the A140 about 20 miles north to Norfolk's cathedral city and county town. visitnorwich.co.uk

Read more: On The Road: Yorkshire's Dales and Moors

Through the middle ages to the 18th century, Norwich was England's second-largest city. Made prosperous by England's rich wool trade, the modest modern city of 150,000 contains a treasure of medieval churches, elegant Norwich Cathedral, cobbled streets, Norwich Castle, half-timbered shops and the largest outdoor market in the country.

It merits a day well-spent indeed. 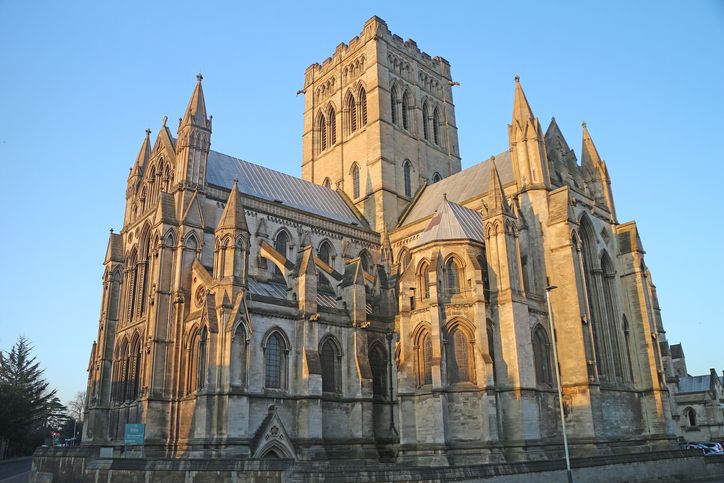 Today's excursion is a road trip in the Norfolk Broads. Take a leisurely start north on the A140 to Cromer. The small harbor town and the seaside resort are comparatively little changed from its holiday making heyday in the mid-20th century.

Do take the time to stroll Cromer Pier, where gigging for Cromer crabs remains a popular activity. Nearby, the National Trust's Felbrigg Hall is a lovely country house visit. Take the A149 across the top of the network of rivers and shallow lakes known as The Broads to Great Yarmouth. The stop to make along the way is Potter Heigham on the River Thurne, one of the staging and supply areas for boating holidays on the 300-mile network of navigable waterways.

Great Yarmouth has been a popular seaside resort since Victorian days. Charles Dickens stayed here and set part of Great Expectations on its broad beach. All the classic seafront diversions are here to refresh body and spirit, and there is a working harbor as well. The A47 makes a quick return the 20 miles to Norwich, though if there's time, do stop at the Stracey Arms Windpump for another piece of Broads' history. 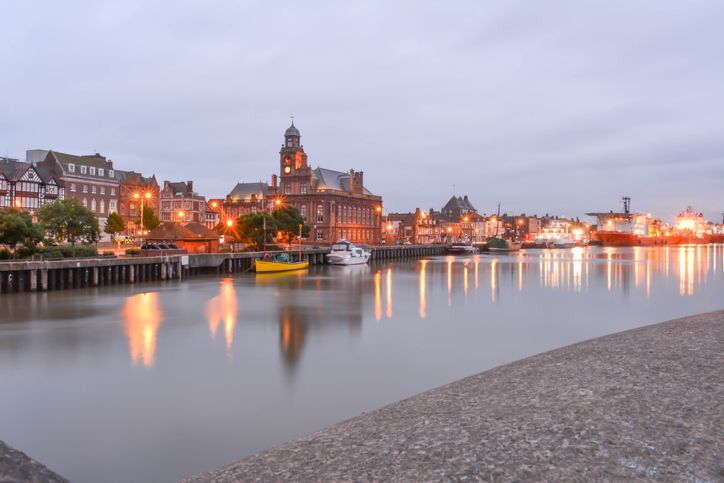 This is in Great Yarmouth, Norfolk England. It is basically the countryside of England

Read more: 10 Free things to do in London

Day 5 - To Cambridge via Sandringham and Ely

Take the A1067 west this morning, joining the A148 at Fakenham. Pick a morning visit to either Houghton Hall, the country house of the great Robert Walpole, first Prime Minister, or Her Majesty's private estate at Sandringham. Both are great experiences that reveal much about their famous owners. Sandringham will occupy more of your day. At King's Lynn, pick up the A10 south across the fens to Ely.

Once known as Eel Island, Ely stands out as an oasis of firm high ground amid miles of surrounding fens. The town spreads out around majestic Ely Cathedral, acclaimed for its magnificent architecture and detailed craftsmanship.

A Benedictine abbey with its roots in the 7th century was rebuilt under Norman rule into the beautiful Romanesque and Decorated Gothic cathedral in the 12th century. Ely's other great visit is the nearby Oliver Cromwell House, the family home of the Puritan leader, for which he pined throughout the 15 years of his military and national leadership.

Carry on south some 15 miles to the ancient university town of Cambridge. There is no shortage of lodging options in Cambridge, but do plan your stay with an eye toward the rhythms of the academic year. In the popular university town, there is likewise a generous bounty of pubs and interesting eating places. visitcambridge.org 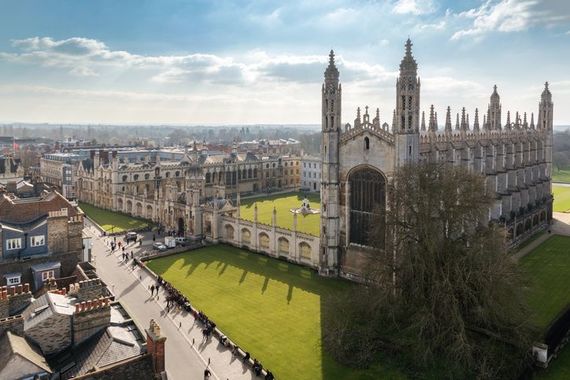 Much more apparent than at Oxford, Cambridge University is Cambridge. The town spreads out through and around the colleges, libraries, laboratories and playing fields of the ancient university. Stop by the Tourist Centre in the Guildhall on Peas Hill to pick up street maps and inspiration.

You might catch an official guided 90-minute walking tour of the most famous highlights, or strike out on your own. Generally regarded must-see visits include King's College Chapel and the Fitzwilliam Museum, but there are enough museums, galleries, colleges, and stories to occupy several days with effort. You might even try punting on the River Cam.

On the outskirts of town, the Cambridge American Cemetery contains the graves of 3,812 airmen who flew out of East Anglia during World War II and honors another 5,127 who never returned from their missions.

If you are driving back toward London, the M11 can have you on the M25 in an hour. Just a few miles south of Cambridge, you might visit the Duxford Imperial War Museum at a former World War II airfield—one of the world's great military air museums. If you have a few more days, head north to Peterborough and the East Midlands of Hidden England.