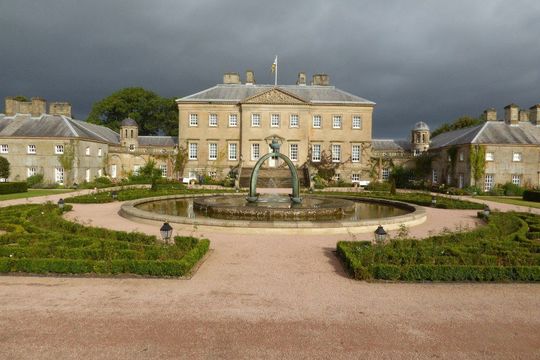 A house fit for an Earl! The history of Dumfries House in southwest Scotland largely revolves around two men, separated in time by almost 250 years.

Fashions were changing when the 5th Earl of Dumfries, William Crichton Dalrymple, inherited the estate in 1742. Whatever else might be said of the 5th Earl he seems to have had the ability to recognize genius in those who had yet to make their name in their chosen career. That talent saw him commission Robert and John Adam, who would later become major figures in the field of architecture, to design his new home for him. The foundation stone was laid in 1754 and the building, which cost the then substantial sum of £7,979, was completed five years later.

Sadly, Dalrymple’s first wife died, childless, in 1755, before she could enjoy her new home.  This left the 5th Earl with the problem of finding a second wife, whose main purpose back then would have been to produce an heir. He consulted friends who advised him that the way to a woman’s heart was an impressive house and furnishings.

Dalrymple set about the task of furnishing his new house with enthusiasm. Recognizing the creativity of another rising star, he engaged furniture maker Thomas Chippendale to design and build him a set of 14, damask-covered, mahogany armchairs. The normal practice of the time would have been to get Chippendale to produce a single piece of furniture and then have the local cabinetmaker reproduce the others. The 5th Earl had every one of his chairs made by Chippendale.

In fact, Chippendale, the finest designer of his time, supplied many of the furnishings for Dumfries House. These ranged from furniture to mirrors to pelmets for the curtains. Worried that the armchairs might be damaged during the journey from London, Chippendale had them packed in wooden boxes and suggested to the Earl that he ‘order the Carriages to have such covering as will turn rain lest they show’d [should] meet it on the road’. Chippendale even sent one of his assistants, paid one guinea (£1.05) a week, to unpack and assemble the chairs and other furnishings, including the rosewood breakfront bookcase which is now one of the principal showpieces among the House’s priceless collection of Chippendale furniture. 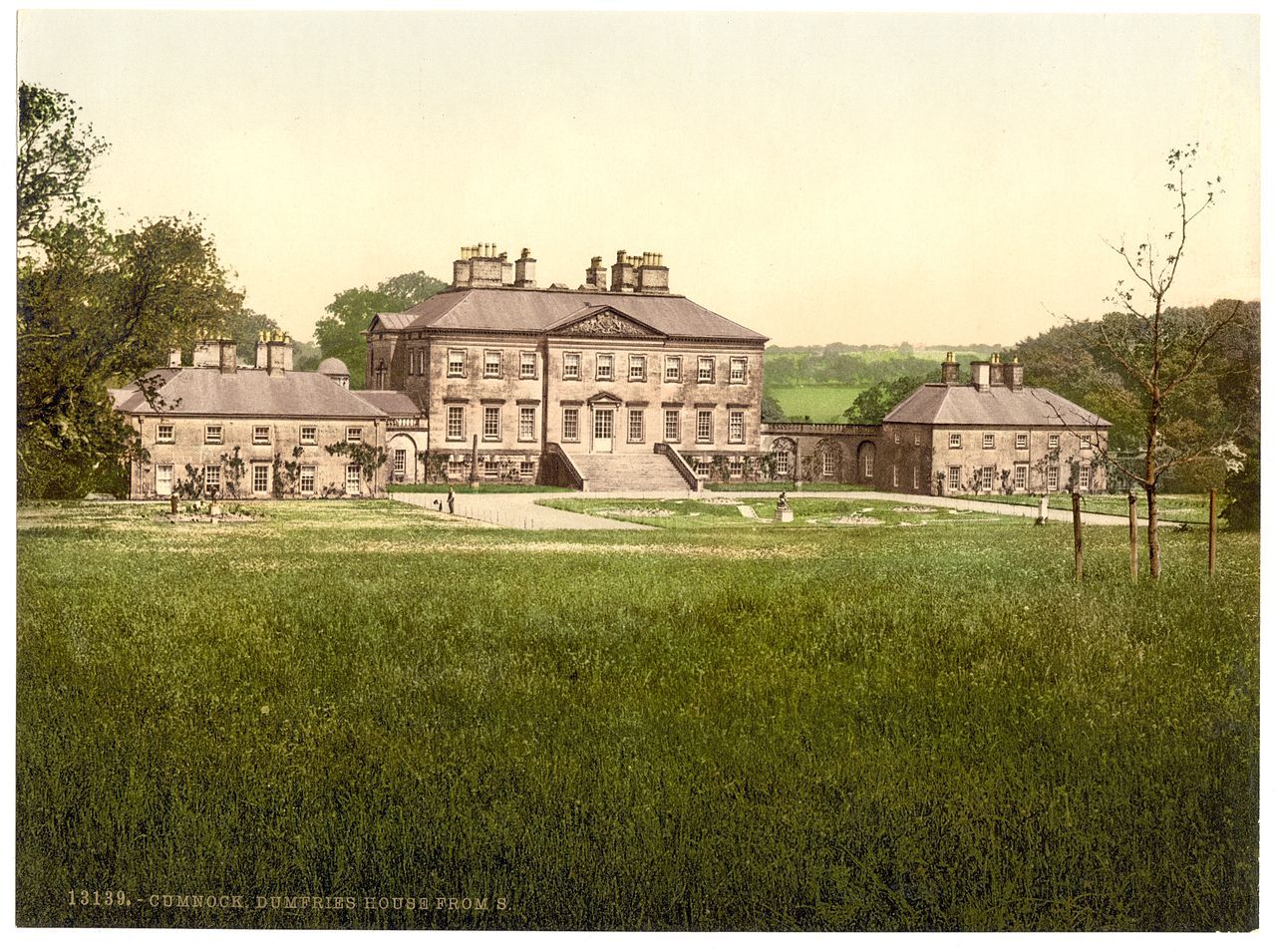 Dumfries House, from the south.

However, Chippendale was not the only cabinet maker with a connection to the house. Three highly skilled Scottish craftsmen, Francis Brodie, William Mathie, and Alexander Peter were also involved. The provenance of many of the furnishings and fittings can be ascertained from the numerous invoices, inventories and other records confirming the source of the items.

The stunning result is a unique collection of furnishings more important than the building itself. Due to its age, much of the collection is very fragile and visitors can only walk on certain areas of the floor coverings and even the guides have to stand on small circles of reproduction carpet. That shouldn’t deter people from visiting as the interiors, furnished with numerous examples of Chippendale’s early work, are truly remarkable. Each public room is a treasure trove of lavish furnishings and visitors can only marvel at the sight of the collection of Chippendale’s work, complemented by items supplied by the three Scottish cabinet makers. 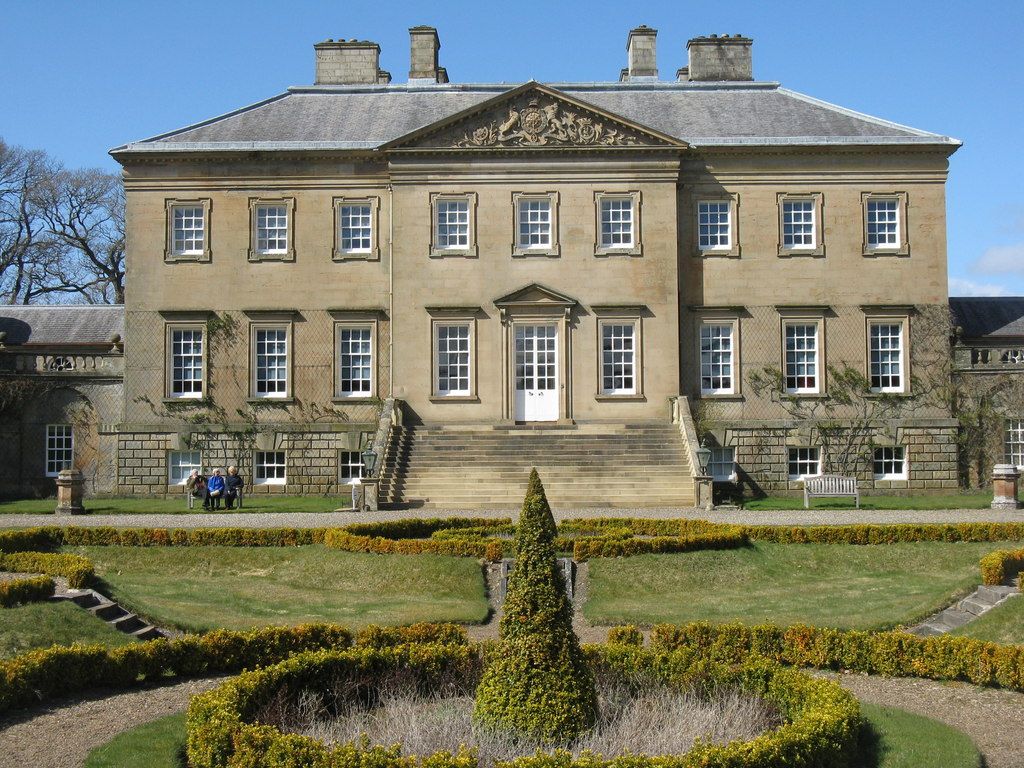 The ceiling of the Entrance Hall is exquisitely decorated, including the Crichton family crest adorned with the motto Nemo me impune lacessit (no one attacks me with impunity).  Otherwise, it is quite Spartan, except for the orrery, a planetarium which was one of the ‘must-haves’ for 18th-century gentlemen.

The Blue Drawing Room and Family Parlor are a modern tribute, not only to the work of Chippendale but also to the restorers who have recovered his chairs in rich fabrics which are very much in keeping with the originals. Additionally, the curtains, pelmets, mirrors and the exquisite rococo plasterwork all combine to make Dumfries House something of a time machine for visitors. The Family Parlor also contains a harpsichord by Jacob Kirckman, the most famous maker in 18th century England.

Elsewhere, the main bedroom with its four-poster bed, resplendent with rich blue damask hangings, is very much reminiscent of Scotland’s aristocratic heritage, while Lord Dumfries’ Study is where he would have written his letters, a regular occupation in those far off days.

Around the turn of the last century, further architectural work was carried out by another Scottish designer, Robert Weir Schultz. Two wings were added to the house by Schultz, although this was done so discreetly and in keeping with the proportions of the original that it is difficult to tell which parts of the House are from the later date. It was also Schultz who is credited with creating the walnut-paneled tapestry room with its 18 domed skylights, thought by many to be his finest contribution to the house.

With the bait of his estate and lavishly furnished house, Dalrymple succeeded in finding a second wife but he suffered from numerous health problems so, perhaps unsurprisingly, she was unable to provide him with an heir and the estate passed to his nephew Patrick McDouall on his death in 1768.

Yet, without the intervention of the second man, His Royal Highness, Prince Charles, Dumfries House, or at least its contents might easily have been lost to Scotland. On the death of the 6th Marquess of Bute in 1993, ownership of the house and estate passed to his son, the racing driver Johnny Dumfries. The family also owned Mount Stuart, a stately home on the island of Bute, and, with Dumfries House surplus to requirements, the family offered the property to the National Trust for Scotland in 2004.

Unfortunately, the Trust had other concerns at that time and, although they made an offer for the property, it did not match the price sought. With the future of the property looking more and more uncertain, funds were promised from numerous arts and heritage organizations but it still fell far short of the sum required to make a realistic offer.

With time running out it appeared that no individual or group would be able to come up with the required funds and the house and contents was literally on the point of being put up for auction. That was when Prince Charles, (the Duke of Rothesay to give him his Scottish title) stepped in, raising a loan for £20 million and attracting funding from numerous other sources. The house and estate are now owned and run by the Great Steward of Scotland’s (another of Prince Charles’ Scottish titles) Dumfries House Trust.

The Prince’s vision was twofold. He realized that the house and its contents, were worth saving but it is situated in an area of high unemployment and deprivation and HRH intended to do what he could to promote the house and develop the area economically.

The Prince is still very much the driving force behind the project and, in order to implement his vision, he enlisted the help of various sponsors who have also bought into the concept. The result is that the estate engages in numerous educational projects involving school children and job seekers.

The education of the young is particularly important, with children encouraged to learn without being in a formal classroom situation so they learn without realizing it. Outside the ‘classroom’ is a play area that is also educational. The water-based play park uses small water wheels, an Archimedes screw, and other techniques to teach the children about water as a power source. Invited by my guide to try out a see-saw, I was startled when a column of water shot into the air a few feet in front of me. The see-saw, and a nearby exercise bike, are both pumps.

Elsewhere on the estate, the children are taught how to grow their own vegetables which, months later, they use to make soup for their lunch. In fact, cookery plays a part in other Dumfries House projects with young people who are struggling to find employment given an insight into a commercial kitchen and waiting skills to assist them in their quest for fulltime work. The estate also hosts a model working farm stocked with rare breeds and a traditional crafts skill center, teaching techniques such as drystone walling. i.e. building stone walls without cement or mortar.

As readers might imagine, the estate is bristling with history and novelty, a mix of old and new. The maze, which has an alternative way in for the adults so they reach the center before their offspring, is another attraction. The John Adam bridge, which dates from 1760, is in contrast to the Chinese bridge, designed by Schultz but only built after the recent buyout. The oldest remaining building on the estate is the doo’cot (dovecot) built in 1671 while even some of the trees date from around 1700.

Both Dumfries House and its estate are fascinating but, unlike other stately homes that have a Royal connection few, if any, have a story like this one; a house created by an 18th-century aristocrat but saved by the heir to the British throne in the 21st.

Here's a short video on the preservation of the house, with some wonderful views indoors: