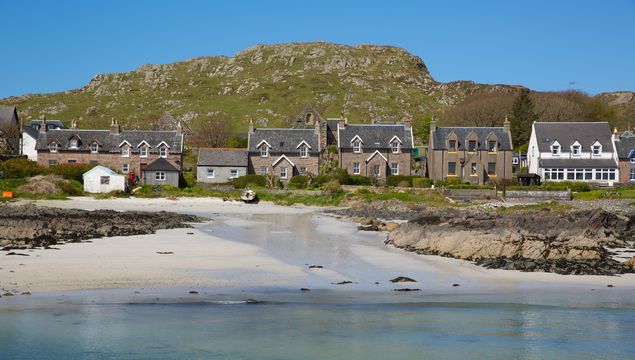 Iona is an Inner Hebrides Scottish island off the Isle of Mull west coast of Scotland, it's a popular tourist destination known for the abbey.Getty

The isle of Iona is one of Scotland's best-kept secrets and most stunning tourist attractions.

From the Mull of Kintyre, at the southern end of Scotland’s Kintyre peninsula, the view across the sea to Ireland’s Antrim coast is stunning.

And while the island of Iona has been a place of pilgrimage for centuries, it has more recently become a tourist destination. Either way, a journey to this region can entice a traveler to explore the history and culture of Iona, Argyll, and Mull; and to delve into the life and legacy of a significant British saint.

With 12 brethren, the Irish monk Colum Cille crossed the 15 miles to Scotland in AD 563 to bring Christianity to the Scots and Picts. For his apostolic work, Colum Cille became Saint Columba. From the center of ecclesiastical excellence he founded on Iona, his work would take him throughout Scotland.

The legend of St Columba

Legend relates that St. Columba landed on the Kintyre Peninsula near Southend where, in the remains of a medieval chapel carved into the rock, are two impressions known as St. Columba’s footprints.

Travel around Scotland was both arduous and dangerous in the 6th century. From Southend, St. Columba likely continued his journey by boat. His destination was not Iona, but Dunadd -an Iron Age hill fort in Kilmartin Glen, a few miles north of Lochgilphead. 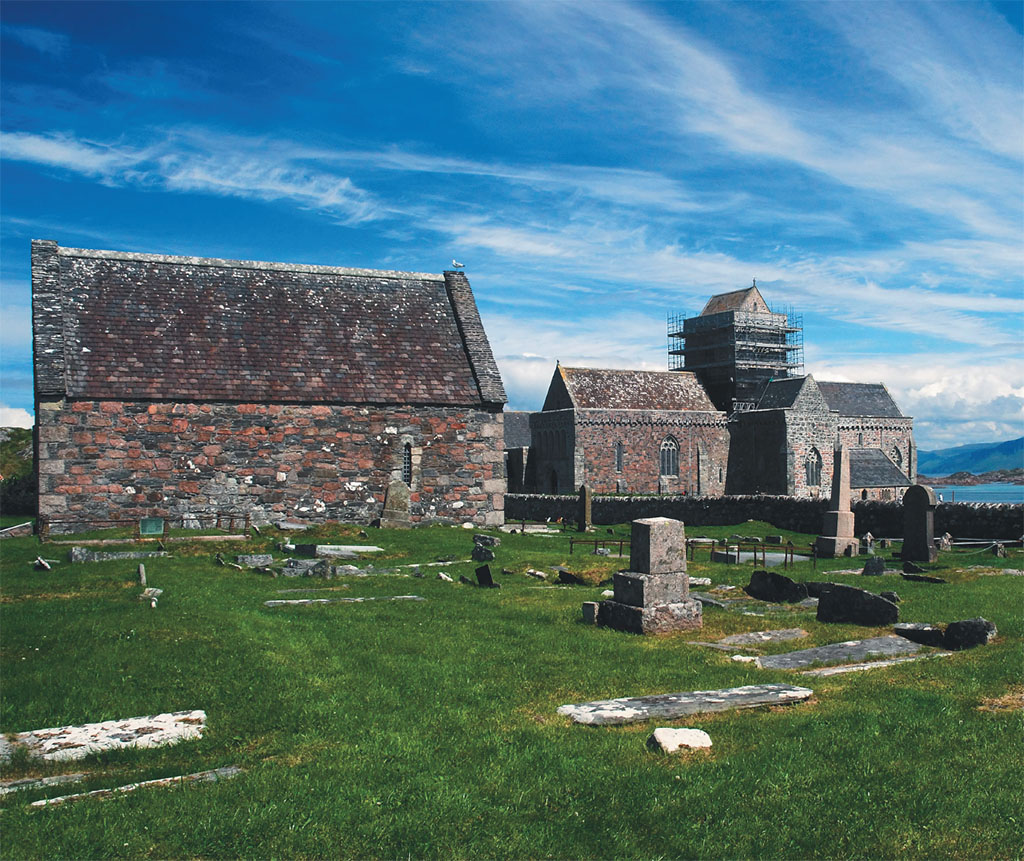 St. Oran’s Chapel and Reilig Odhrain, the burial place of Scottish kings and the Lords of the Isles, line the path that leads from the ferry to Iona Abbey. Imahe: Chris Sharp


With a host of burial chambers and standing stones, Kilmartin is one of the most important ancient historical sites in Britain - a must for those who like to visit such places. Though dating from the Iron Age, Dunadd Hill Fort was still a significant community in Columba’s time. The reason for his visit to Dunadd provides important background to Columba’s life.

Most of what is known about Columba comes from Adomnan’s Life of St. Columba, written about a century after Columba’s death. More homily than a biography, it emphasizes miracles attributed to St. Columba that have evolved into legends, many of which make interesting reading. For instance, St. Columba is said to have saved one of his brethren from being devoured by the Loch Ness monster by making the sign of the cross in front of the beast. Such miracles were contemporary evidence for Columba’s beatification. 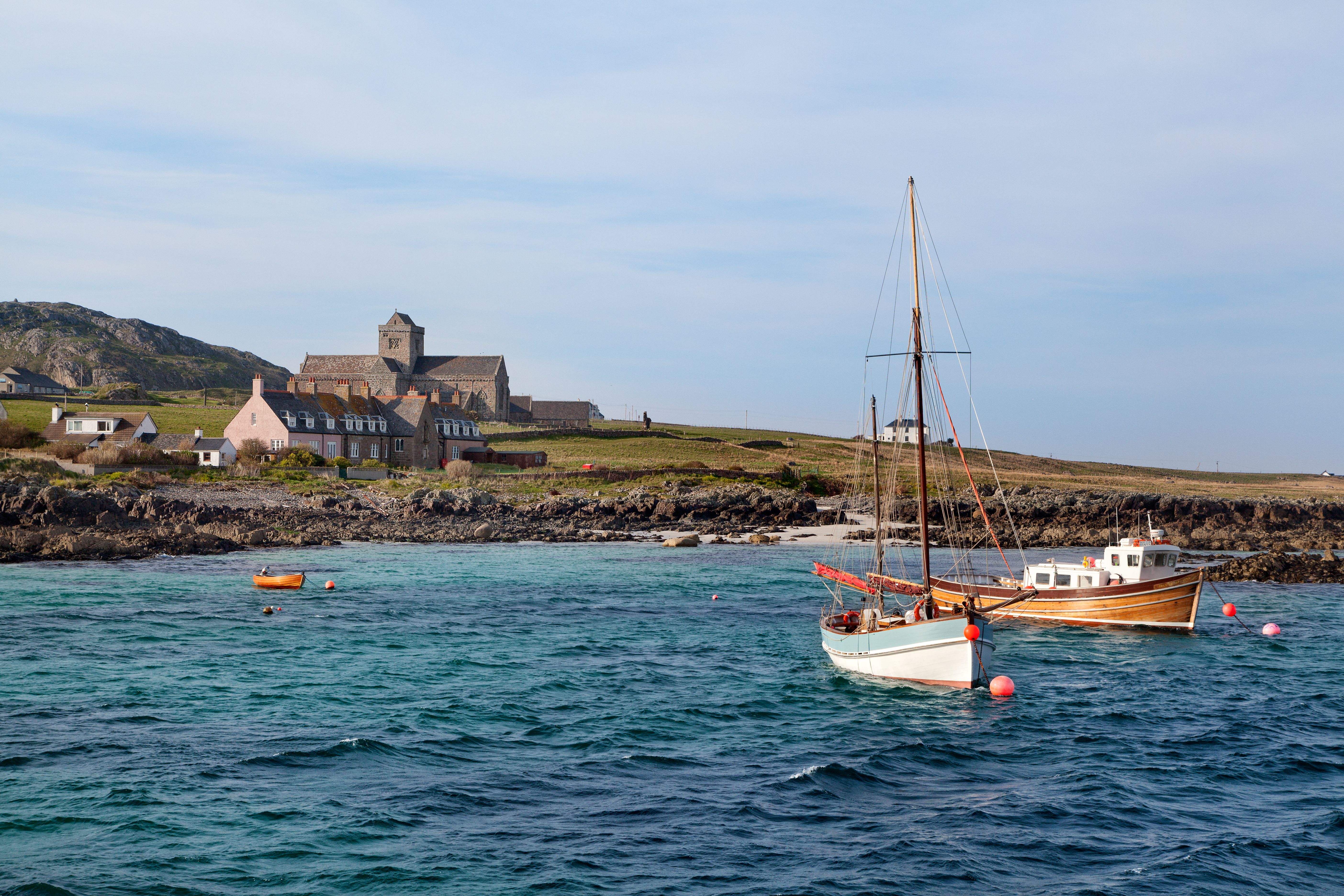 Iona Abbey is located on the Isle of Iona, just off the Isle of Mull on the West Coast of Scotland. It is one of the oldest and most important religious centres in Western Europe. Image: Getty

St. Columba was born in Ireland in about AD 520, the son of a powerful Irish family, possibly of royal lineage. It is recorded that as a young man he entered the church and experienced monastic life at Kells and Derry; his calligraphic skills support this hypothesis.

Some sources claim Columba was involved in an argument over a manuscript copyright, which resulted in a battle between two Irish kingdoms in which thousands were killed around AD 559. What is certain is that the battle was a power struggle, and legend has it Columba performed a miracle to make his liege lord victorious. But Columba was so distraught by the carnage he caused that he went into penitential exile in Scotland.

Dunadd was a principle community of the Dal Riata (or Dalriada), an Irish tribe that had invaded, colonized and settled in Argyll and the southern Hebrides. Columba knew and was possibly related to, the Dalriadian king Conall mac Conmgaill. Standing on Dunadd and looking west over the marshes, a wide tidal estuary 1,600 years ago, it is not difficult to imagine Columba arriving in his currach and seeking assistance from Conall. Interestingly, there is also an engraved footprint at Dunadd. This was where Dalriadian kings stood during their coronation. King Conall gave Iona to Columba. 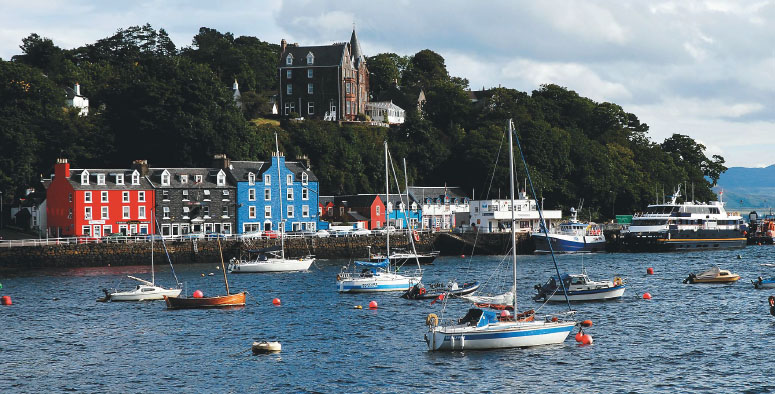 Image: The Caledonian MacBrayne ferry from Oban lands on the Isle of Mull at pretty Tobermory. Chris Sharp

Leaving Kilmartin, head to the ferry port of Oban. If ferry schedules force you to linger in Oban, a number of attractions merit attention, including McCraig’s Tower and Dunstaffange Castle. McCraig’s Tower is a folly constructed in 1890 in the style of a Roman coliseum, and on clear mornings provides a good vantage point for views of the isles.

Medieval Dunstaffange Castle, on a wooded promontory outside Oban, was the capital of the Dalriadian Scots and has historical associations with Robert the Bruce, Bonnie Prince Charlie, Flora MacDonald and the Stone of Scone. The stone, ceremonially important in the coronation of Scottish Kings, was first used here but is thought to have come from Iona.

On its approach to Mull’s Craignure harbor, the ferry from Oban passes the contrasting castles Duart and Torosay.

Duart Castle is a solid 14th-century construction overlooking the Sound of Mull, its bold position denoting its defensive purpose. Today it is the clan center and home of the chief of Clan Maclean, with appropriate clan-oriented exhibits.

Torosay Castle is a Victorian baronial mansion with luxuriant Italianate gardens, owned by the Campbell family. The Campbells have a bittersweet relationship with Iona; an ancestral Campbell was responsible for much of the Highland Clearances on Mull and Iona, even paying for the displaced tenants’ passages to Canada - a dastardly act mourned in the Canadian Boat Song. But contemporary Campbells have been instrumental in the restoration of Iona Abbey, where they have a funeral effigy.

For an interesting journey to Torosay, take the narrow gauge steam railway from Craignure. Torosay has fine exhibits of period furniture and books, and much on the Campbells’ history.
Mull has promoted itself in recent years as a tourist destination for watching wildlife. During the spring and summer, impressive colonies of seabirds - such as puffins and guillemots- can be spotted. From Tobermory, wildlife cruises sally forth in search of whales, dolphins, basking sharks and rare sea eagles. 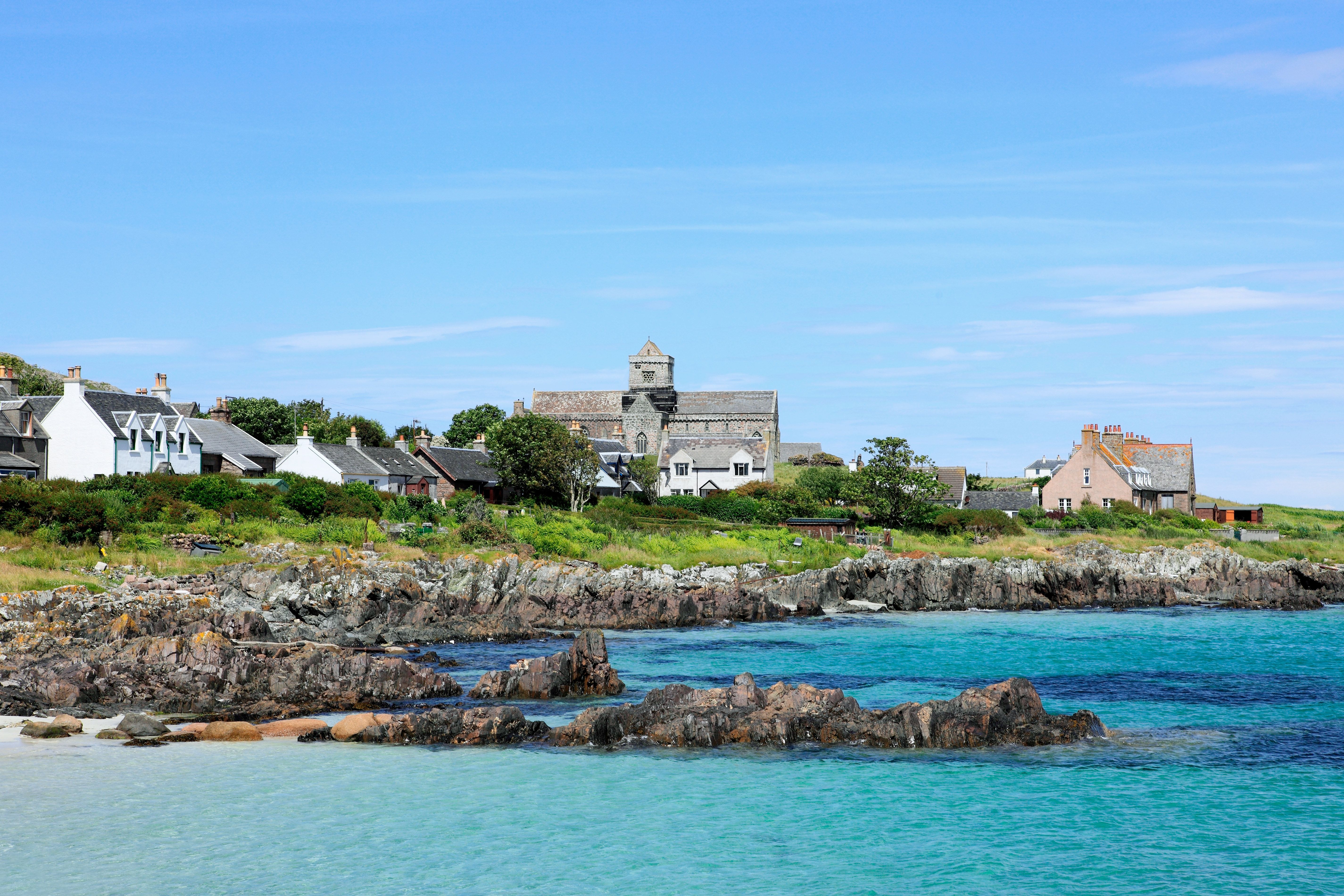 Tobermory itself boasts a selection of shops, cafés, bars, and restaurants. The local museum, run by enthusiastic volunteers, has informative exhibits on the island’s archaeology and history. A particularly intriguing exhibit concerns sunken treasure in Tobermory Bay. In 1588, a treasure-laden Spanish galleon fleeing the English anchored in the bay and mysteriously blew up. Diving expeditions to recover the anticipated treasure has been unrewarding, but the legend persists.

Mull’s west coast is a delight to drive, offering an endless succession of dramatic views. Just off the coast is uninhabited Staffa Island, whose dark basalt cliffs have been breached by the sea in a few places to form caves. The most renowned is 227-foot Fingal’s Cave, where visitors can enter along a roped walkway and listen to the echo of the lapping of waves the likes of which inspired Mendelssohn’s dashing “Hebridian Overture.” 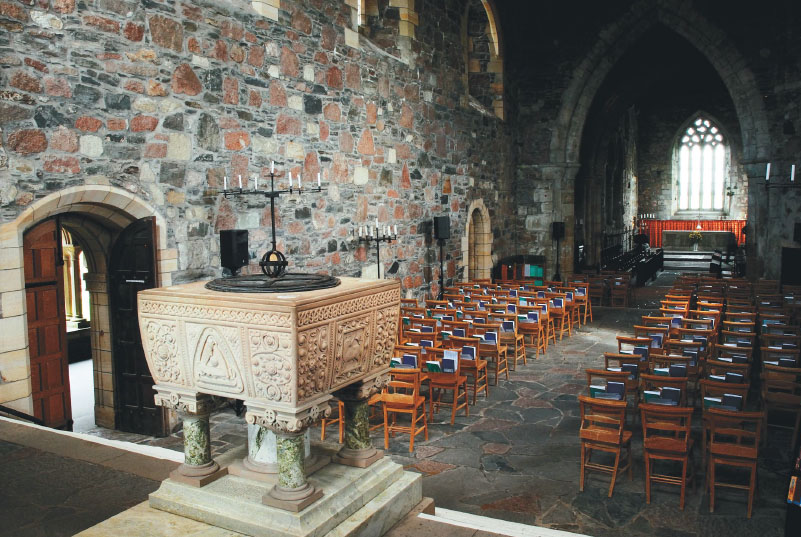 The public is invited to join brief meditative services in the simple nave of medieval Iona Abbey. Image: Chris Sharp

The ferry port of Fionnphort provides access to Iona. Unfortunately, most visitors rush through Fionnphort and miss the excellent Columba Centre with its informative exhibits on the saint’s life, times and legacy.

When St. Columba came to Iona, its isolation was perfect for the practice of the Celtic monastic tradition—a remote location so its brethren could devote their lives to God. This devotion would be manifested in frugality, scholarship and the creation of a center for evangelical pilgrimage. Also integral to the Celtic concept of scholarship was artistic excellence as a form of sacred adoration.

Columba’s legacy suggests that he succeeded in all these pursuits; ornately carved crosses are often classified in the Iona style, as is colorful calligraphy in scripts such as the Book of Kells. There is some evidence that Columba himself started this tome on Iona.
Columba educated the apostolic saints Aidan and Kentigern on Iona as well.
Nothing much remains of Columba’s monastery; its organic materials decayed long ago. Today’s monastic buildings include a restored medieval abbey a few minutes’ walk from the ferry landing. The route to the abbey has changed little in 1,000 years.

It passes a cluster of gaily painted fishermen’s crofts, a hotel and a good restaurant. Farther on is a ruined 12th-century nunnery (even though Columba had banned women from Iona). Beyond the nunnery, with its pleasant gardens, is Maclean’s Cross—carved in the Iona style, it was erected in 1500 and probably served as a pilgrims’ prayer station.
Just before the abbey precinct is St. Oran’s Chapel and Reilig Odhrain, which respectively are a burial chamber for the Lords of the Isles and a graveyard where many kings of Scotland are buried. The precise number of Kings and their locations are unknown, as their grave slabs have been long removed.