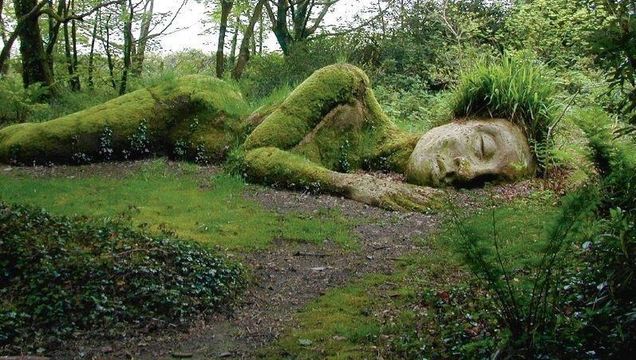 Gardening is war. Wildlife, weather, weeds, pestilence, conflict and even fashion can obliterate entire horticultural chapters within months, leaving the book of British gardening history as patchy as a badly-mown lawn.

We have nothing left of the beautiful gardens enjoyed by Roman Britons, for example, though at Fishbourne near Chichester, excavations have led to a unique reconstruction using original 1st-century bedding patterns. The great monastic gardens were largely razed during the Reformation. Important though Lancelot “Capability” Brown’s work is to the English landscape, the damage he and his followers did to the country’s exquisite Tudor, baroque and rococo gardens is undeniable. Yet in his turn, Brown’s sweeping vistas are now some of our most plundered gardens.

The human fascination with “lost gardens” lies deep. Eighteenth-century Grand Tourists, traveling the great sights of Europe in search of inspiration, were enchanted by ruined Roman and Greek temples. On their return, they incorporated fake classical “follies” into their newly landscaped vistas. The neo-gothic era brought earthier romance, of broken towers and forlorn, haunted castles. Frances Hodgson Burnett tapped into the Edwardian vision of lost paradise with her children’s classic The Secret Garden.

After two world wars, however, many of the great gardens of England became genuinely lost. Rising death duties and lack of manpower saw hundreds of stately homes destroyed. Gardens disappeared in their thousands.

The 1970s began a gentle movement towards rediscovering England’s vanished green and pleasant lands. Among other stunning discoveries, a unique early-18th-century secret was unearthed in a Cotswold hollow, and years of horticultural forensics later Painswick Rococo Garden was brought back to life.

In 1987 the game changed. A seminal BBC TV series, The Victorian Kitchen Garden, showed veteran head gardener Harry Dodson resurrecting an abandoned walled garden at Chilton Foliat, Wiltshire, with the tender caress of an ardent lover. It heralded a most unlikely overnight sensation. The DVD still sells well nearly 30 years on, its romantic legacy of “lost-gardens-found” fuelling our primeval yearning to tame nature, at least for a while.

Part of the romance of buried treasure is in knowing there is more out there to be discovered. Horticultural sleeping beauties still wait to be kissed; their grottoes unearthed, their walls uncovered. Paradise remains only partially found.

The Lost Gardens of Heligan, Cornwall

England’s most famous lost gardens were rediscovered in 1990 after a devastating hurricane actually cleared some of the dense undergrowth. Heligan was gradually restored by a small group of enthusiasts and now, 25 years on, is one of Cornwall’s biggest visitor attractions. At its height, the estate comprised 1,000 acres and employed an army of staff. After the Great War, however, the garden was left to slumber beneath a counterpane of green. Part of that green was an impressive array of 150-year-old rhododendrons and camellias that had clearly enjoyed the Cornish climate. When finally tamed, these living artifacts were deemed so important they formed the basis of what is now the country’s National Collection. Much of Heligan’s modern interpretation is in seeing the pleasure grounds, sub-tropical jungle, productive gardens, and ancient woodlands through the eyes of the people that tended them, and especially in the young men whose lives were spent nurturing nature before marching to death in the trenches. But this is no mawkish, backward-looking estate. Heligan celebrates life, whether of the plant or human variety. 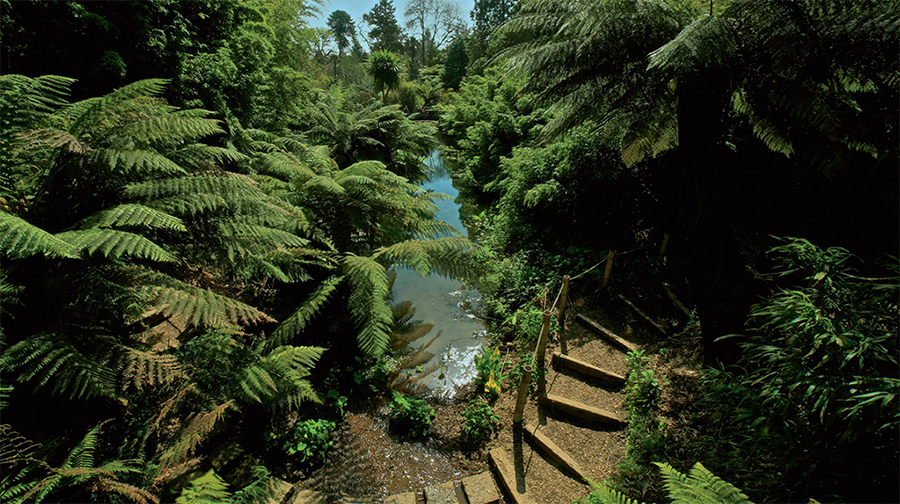 Once visited by royalty, nobility and the greats of the gardening world, the extravagant landscape of eccentric Edwardian plantswoman Ellen Willmott included a boating lake (on a hill), acres of greenhouses and even a miniature Yorkshire gorge. Known equally for horticultural extravagance and irascibility (in later years she took to booby-trapping daffodils and carrying a revolver in her handbag to deter bulb thieves) Ellen Willmott is best known today for the thistle-like plant that carries her name, Miss Willmott’s Ghost. It’s said she carried its seeds in her pocket to sprinkle on other people’s gardens. Whether this was generosity or spite depends on what you think of thistles.

Warley Place is now a shadow, the ruins of both house and garden peeping tantalizingly through a jungle of overgrown trees and wildflowers. Peer into the crumbling remains of basement kitchens, ruined conservatories, tumbledown bricks and rusting ironwork of hothouses, walled gardens, and water features and dream of a lost Edwardian idyll.
Those in the know about this wonderful place enjoy drifts of snowdrops in February, hosts of daffodils in March, oceans of bluebells in April, rainbow jungles of rhododendrons in May and the dappled mauve of woodland foxgloves in June. All year-round, though, the sheer variety of birds and other wildlife make this still-lost garden a sublime visit. 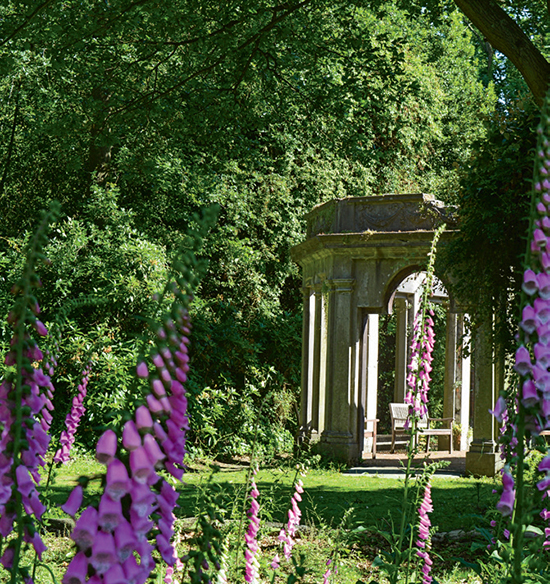 In the 1980s garden enthusiast, Briony Nierop-Reading learned of the garden through a midwife attending the birth of her child. A meeting at the city library saw the formation of the Plantation Garden Preservation Trust.
Early Trust photos show brambles, sycamore trees, and ivy blanketing the entire area. It’s worth spending time in the online archives before visiting to see the extraordinary journey the garden has taken since, its glories battered, but all the more beautiful for the ride. 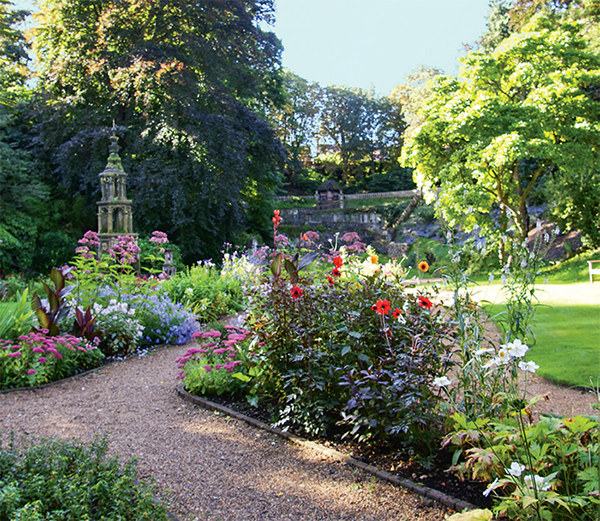 Plantation Garden’s Italianate terrace was rescued from an overgrowth of brambles and ivy. SANDRA LAWRENCE

Begun in 1738 by Hon. Charles Hamilton, Painshill’s 158 acres once rivalled the likes of Stourhead and Stowe. They were visited by Thomas Jefferson and John Adams, and even became the subject of a Wedgewood dinner service for Catherine the Great of Russia.
After World War II, however, this exquisite landscape garden disappeared back into the Surrey hills, and by 1980 had dissolved to a broken, forgotten tangle. It would have been lost forever if a group of volunteers hadn’t stepped in to save the myriad follies, towers, gazebos and lake vistas from total disintegration.

You’ll need a day to see it all, from the ruined abbey and Gothic temple, amphitheater and water meadows through the Turkish tent, Chinese bridge, waterwheel and alpine valley to the vineyard, cascade, walled garden, and rebuilt hermitage. When the latter was first created it actually had a resident hermit, acquired via a newspaper advertisement requiring candidates to refrain from combing their hair, cleaning their nails or socializing. The recluse was sacked after being discovered enjoying several raucous pints at the local inn.

Painshill’s best sight, however, is easily the Crystal Grotto, after extensive restoration now sparkling again with thousands of crystals and re-imagined stalactites. 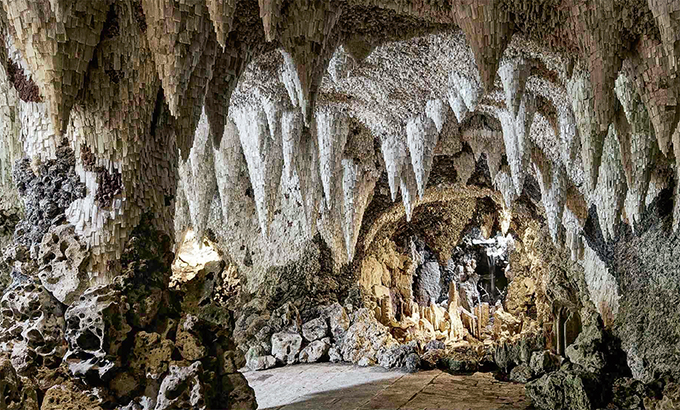 For many years a secret corner of Greenwich Park hid in plain sight. People assumed the high brick wall led to the street outside or, if they were on the street, the park inside. In fact, a long, slim, walled garden nestled between the two, so full of weeds only true aficionados knew about the former orchard to the east of the Queen’s House, built in 1616 by Inigo Jones for Anne, wife of King James I.

Originally filled with miniature fruit trees, when the Queen’s Garden was excavated an ancient mulberry tree was uncovered. James made all of his courtiers grow mulberries in their gardens to start an English silk trade. The venture failed because James had imported the wrong variety of bush, but this particular tree, surrounded once more by heritage varieties of Kentish fruit, is flourishing. Volunteers have also cleared the ancient well, planted up formal and informal ponds and begun a model allotment garden.

It’s easy to miss; walk along the bottom of Greenwich Park, past the National Maritime Museum, Queen’s House, boating pond and children’s playground. When you get as far as you can go without going uphill, look back over your shoulder; the wrought-iron gate will appear. 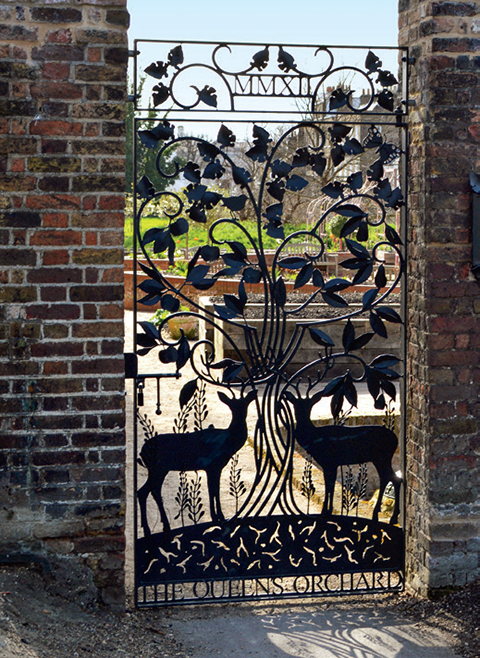 Colonel John Thomas North, aka The Nitrate King, was desperate to leave his humble beginnings behind. He was even keener to leave behind how he made his fortune—selling South American bird droppings as fertilizer. When he bought Avery Hill House, North immediately set about improving both it and his reputation, hoping for a visit from the Prince of Wales, later Edward VII. 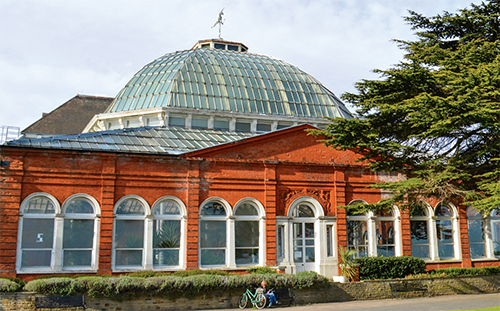 The Victorian palm house at Avery Hill is second in size only to Kew Gardens’. SANDRA LAWRENCE

Part of those improvements saw the building of a magnificent palm house, second only in size to the one at Kew Botanic Gardens. North filled it with exotic plants from all over the world.

The Avery Hill Winter Garden is pretty much all that’s left of the house. The hothouse has been put up for sale. Locals are amassing “Save Our Winter Garden” petitions, but in the meanwhile, it’s still possible (and recommended) to visit this most secretive of secret gardens free of charge. Enjoy the ironwork columns, the marble statue of nymph Galatea, palm trees and Norfolk pine while you can. Edward VII never did.