Haltwhistle is still literally the center of Britain 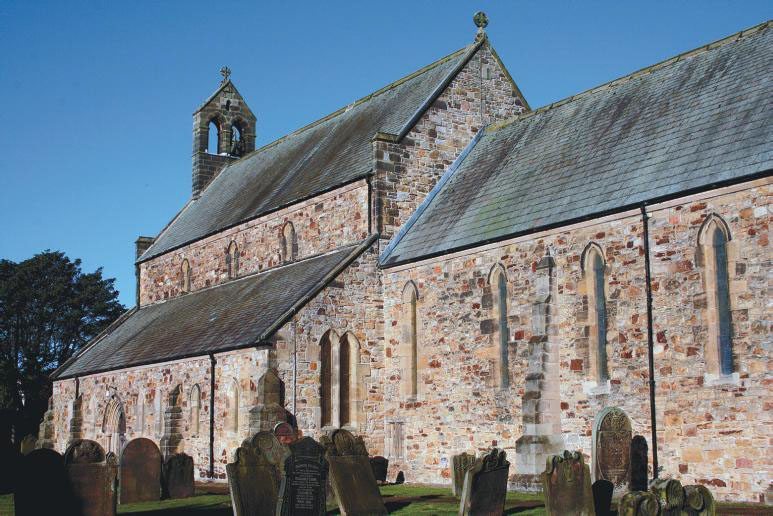 In the heart of Roman Wall Country, the Northumbrian market town bristles with pride.

It may come as a surprise to millions in London, but the capital is not the center of Britain. For that, you need to travel 300 miles north to Hadrian’s Wall. Welcome to the Northumbrian market town of Haltwhistle—officially the Center of Great Britain.

From North Orkney to Dorset’s Portland Bill, Bowness on Solway to Wallend, Haltwhistle is the midpoint. In fact, there are eight different ways to measure the geography, and however you do it, Haltwhistle lays claim to being the “Centre of Britain.” It is a distinction they proudly treasure; it’s their claim to fame.

Normally, such a claim to fame does not garner the rural market town of 3,000 much attention. The recent Scottish independence referendum, though, brought Haltwhistle to mind. Would it make a difference to the town which way the Scots decided? The geographical reality wouldn’t change, but would it feel quite the same? Inquiring British Heritage readers want to know. So, I drove up to Northumbria to find out, turning west on the a69 at Newcastle and following Hadrian’s Wall for 35 miles.

Haltwhistle has one commercial street running east and west from the market place, whose charter King John granted in 1207. I checked into the centre of Britain Hotel across the street. It’s the oldest building in town (much updated since then), right next door to the centre of Britain launderette. this is an unprepossessing town, hardly picturesque or catering to impress folks. It is old and gray from the weathered building stone that it was fabricated from centuries ago. Like many seemingly nondescript rural small towns, however, Haltwhistle hides a wealth of history in plain sight.

The Heart of Roman Wall Country

Its geographic distinction really isn’t what draws visitors to or through quiet Haltwhistle. as it happens, the town also boasts being “The Heart of Roman Wall Country,” and it is the town closest to the Emperor Hadrian’s famous construction. For 300 years, Roman soldiers fortified and occupied Hadrian’s Wall, including at Mile Fort 42 just up the road at Cowfeld Quarry. The windswept barren moors of the Pennines marked the farthest outpost of the Empire. The Roman Army Museum, just west of Haltwhistle, unpacks the life of the Roman Army here in the hinterland. The territory hardly felt like the center of anything to the legionnaires that spent years here before, often retiring in the province with their families. The story is expanded at the huge base fort of Vindolanda, a few miles east, where a bustling commercial and residential town grew up around the fort and barracks blocks. Ongoing archaeological digs at Vindolanda continue to turn up discoveries that enlarge our understanding of Roman domestic and military life (see “Dateline,” January 2015).

To the north of Hadrian’s Wall, the Scottish border lies just a few miles away. For centuries, the harsh Border Country on both sides was a largely lawless land, characterized by clan feuds, cattle raids, and rough justice. Fortified stone family homes sprung up to protect life and property. Known as peel towers in the countryside, such townhouses were termed bastles. Many of the shops in Haltwhistle disguise by their contemporary purposes the largest existing concentration of 16th and 17th-century castle or defensible houses in the region.

Hadrian's Wall trail is one of Britain’s most popular coast-to-coast walking routes. Walking parties are regular occupants of the Centre of Britain Hotel from April to mid-October. For hikers, Roman soldiers or the farmers that run sheep and cattle across the vast, open landscape, though, the dark winter months are wet and raw with sustaining winds off the North Sea. 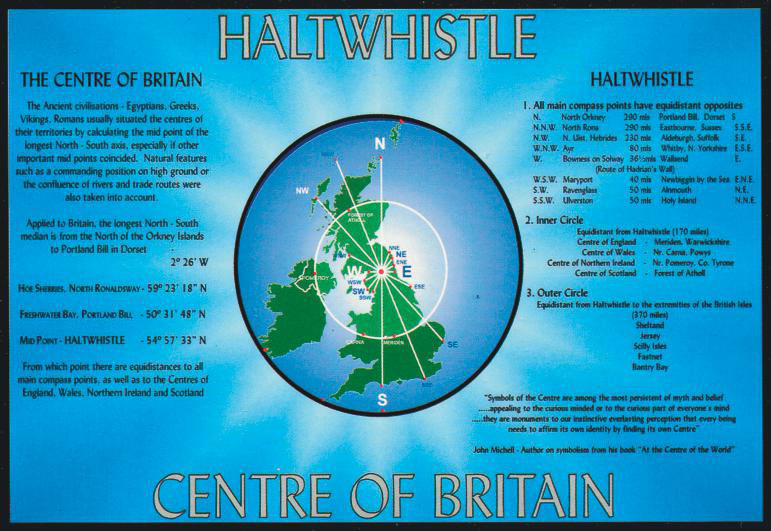 However you draw the coordinates across Great Britain, the lines all remarkably cross on Hadrian’s Wall.

That’s the time to repair across the market square to The Black Bull. With low exposed beams and a proper log fire, the pub is a town center gathering place. The cut stone fireplace may well have been looted from Hadrian’s Wall several centuries ago. Landlord Kevin Ellis wears a collared shirt with the legend “Grumpy Old Bastard” on the back but greets regulars and strangers alike with a smile and a well-pulled pint of cask ale. Out of the kitchen, the food is a patch up on regular pub fare, with accomplished versions of pub comfort food from ploughman’s platters to fish & chips and pies. There is nothing dour about the local folks, and easy camaraderie fills the air.

Tucked between the market square and the river is the 12th-century Church of the Holy Cross. The church holds a 7th-century holy water stoup. Tradition identifies the stoup with Paulinus, one of the first Christian missionaries in Northumbria. The stained-glass East Window is the 1872 work of noted Pre-Raphaelite artists Edward Burne-Jones and Philip Webb.

Haltwhistle sits just halfway between Carlisle and Newcastle. The A69 is a good, fast road, making the island’s center equally accessible from east or west. Those cities make for an easy train connection, too. Northern Rail line connects the two with service to Haltwhistle and all the communities along the famous Wall. When the locals “go to the city,” though, the general consensus is Carlisle, principally because it is smaller and more manageable than Newcastle. 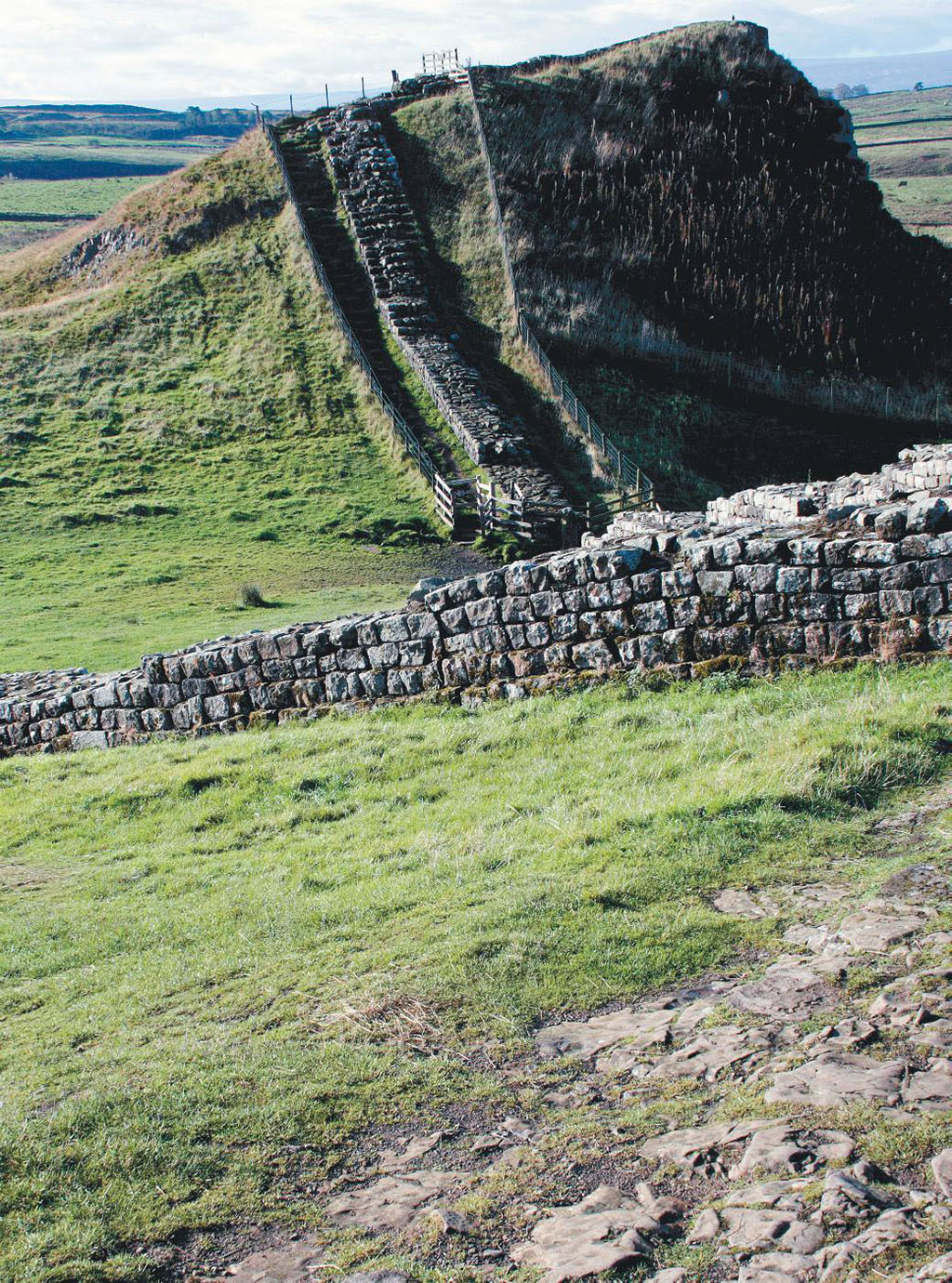 Above Cowfield Quarry just to the north of town, Hadrian’s Wall climbs the hill to Mile Fort 42.

Haltwhistle's closer neighbor Hexham is the largest and most colorful town along the wall (circa 14,000). Hexham Abbey, still the town parish church, contributed mightily to the area history and birthed the town growing up about it. There are several blocks of pedestrianized shopping and cafes, and larger supermarkets on the periphery of town.

Back at the Black Bull, Haltwhistle locals feign a certain nonchalance over the Scottish vote. “After all,” they opine proudly, “we would still be the center.” When pressed, however, many reluctantly admit that some luster would have been lost. Haltwhistle rests easy, and just smiles.