Welcome to the Port of Manchester 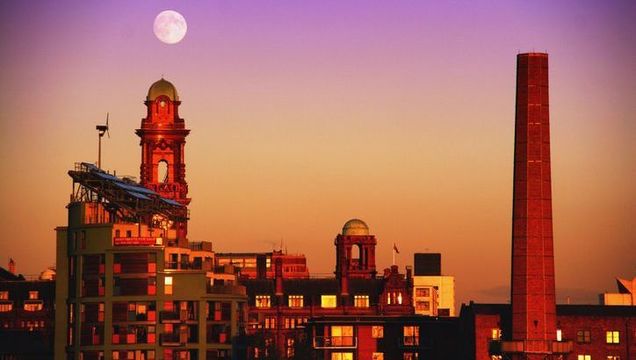 Dozens of ships unload their cargo onto the docks at the port of Manchester, some of it bound for nearby warehouses, some straight for the local mills and factories.

Passengers board liners to cross the Atlantic, chattering excitedly ahead of the long journey. A hundred years ago, it’s a sight that would have been familiar in many of Britain’s famous ports: Portsmouth, Liverpool, Dover, or Grangemouth.

Despite lying nearly 40 miles from the Irish Sea, Manchester was once a bustling seaport. The population of the city grew six-fold during the 19th century, becoming so wealthy from the textile trade that it was known as Cottonopolis.

The history of the port

Cotton was imported from the US and India, woven into fabric in the many mills around the city, then sold on or exported to the Empire and North America. It was a profitable trade and Manchester’s businessmen were used to making money—lots of it.

But the Mancunians didn’t have everything their own way. Dues owed to the Port of Liverpool and high fees charged by the Liverpool-Manchester Railway ate into their profits. The response of the Manchester businessmen was bold: They decided to build a canal.

Not one of the narrow, quaint canals built for barges that became obsolete with the coming of the steam train, this was a canal that post-dated the railways, capable of carrying ocean-going ships directly from the Mersey Estuary to Manchester, bypassing Liverpool Docks and the railway completely.

Opened in 1894, the Manchester Ship Canal carried millions of tons of cargo to the newly created Port of Manchester. Nine docks at the far end of the canal helped Manchester become the third-busiest port in Britain, reaching peak activity in 1958 with some 18 million tons of freight being loaded and unloaded.

The businessmen of Manchester may have dreamed big when they built the canal, but they did not dream big enough. Come the 1960s and the containerization of sea trade, which allowed vast cargo ships to voyage across the globe, the Manchester Ship Canal found itself not big enough to carry the new container ships. So began a steady decline until Manchester’s docks closed in 1982. 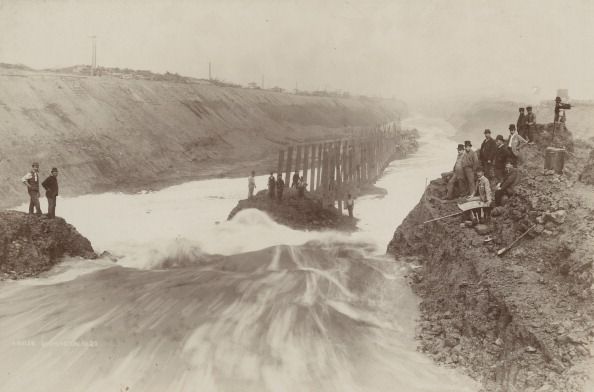 The port is still thriving

True, the Port of Manchester is no longer as busy with ships as it once was, but it is still thriving. The redundant land was purchased by the council in 1983, and the next few years were spent preparing for major redevelopment: tidying, landscaping, building roads and bridges to link the various docks. A new generation of Manchester business owners had their own vision for the area, now known as The Quays.

The first landmark building to rise from the industrial ashes was The Lowry theater, named for L.S. Lowry, Manchester’s most famous artist, who was born just a mile from the building that now bears his name. First opening its doors to patrons in 2000, The Lowry was the project that escorted The Quays into the 21st century.

The Lowry has an impressive calendar of events. The main stage, the biggest outside London, hosts touring West End shows and the best theater groups in the North, while two smaller arenas house other shows and performances. Theatergoers can step outside the door and straight into the Lowry Mall, conveniently close and stuffed with places to eat and drink before the show.

The ultra-modernist Lowry theater boasts the biggest stage outside of London, and hosts West End touring shows as well as the North’s principal theater troupes. Just across the canal from MediaCityUK, The Lowry has helped propel the old port into becoming a 21st-century center of the arts.

Even if you aren’t able to catch a performance, The Lowry is still worth a visit. A permanent exhibition of L.S. Lowry’s work is displayed in the galleries in the theater building. Time your visit for one of the two daily talks to hear more about Lowry’s famous mill and industrial paintings, his limited palette (he used only five colors) and his life in Greater Manchester. 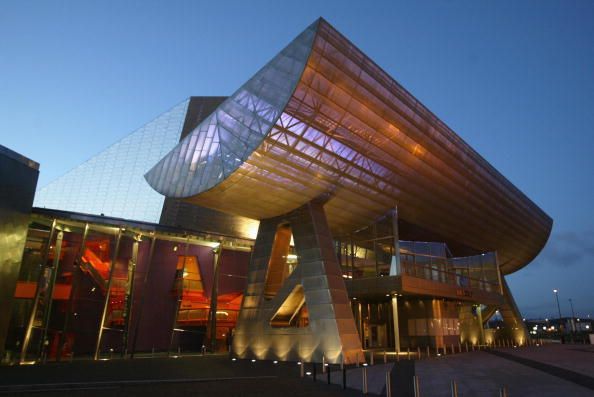 The Lowry at Salford Quays in Manchester, England on February 9, 2003. (Photo by Gary M. Prior/Getty Images)

Cross the old railway swing bridge outside the theater to be whisked into MediaCityUK, the flash new complex that is making Manchester a hub of British broadcasting. Lowry would not have recognized this modern cityscape of tall, glass-fronted offices and studios.

The BBC moved to Manchester in 2011, sparking a new phase of redevelopment in The Quays. The television and radio studios produce many programs, including staples of the British day such as BBC Breakfast and Match of the Day.

Journalists can be seen through the glass, hard at work, but to get the best glimpse behind the camera, take one of the BBC tours: not only can you visit the studios, you can also have a go at presenting your own news and weather reports. Other broadcasters have joined the BBC at MediaCityUK; the studios of perennial British favorite Coronation Street are housed on the opposite side of the water to the BBC.

From the BBC studios, cross another bridge to the opposite side of The Quays and a spectacular building with imposing metal shards giving the impression that the structure has been shattered. The stunning building houses the Imperial War Museum North—built on a bomb site, where grain silos were targeted and destroyed by the Luftwaffe in World War II.

Unlike the Imperial War Museum in London, which has objects and displays in a number of different galleries, IWM North concentrates on 20th-century warfare in a single exhibition space. It’s an approach that works wonders.

The layout of the gallery takes you through the troubled century chronologically, from World War I to modern conflict in the Middle East, while every hour a sound and light show casts the room into darkness and themed presentations are projected onto the walls. It brings the whole gallery to a halt as visitors take a seat to watch the effects unfold around them.

Before leaving, be sure to take the elevator up to the 100-foot high viewing platform at the top of the museum. Here you’ll see the best view of The Quays, and one that you’ll not get anywhere else. Directly in front is The Lowry, and to the left is Media-CityUK, both surrounded by the water that once allowed this place to become a busy port. 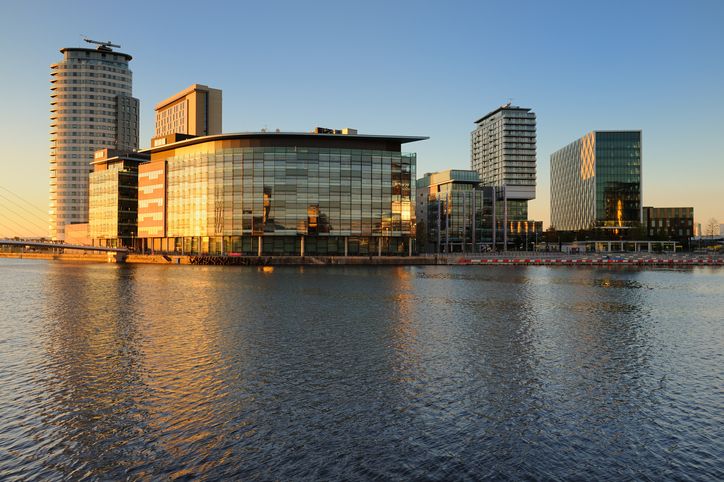 To the right you can see another bridge, that crosses back to The Lowry theater and completes a short circular walk—the Lowry, MediaCityUK and IWM North are all set within the same square mile. But first it is worth detouring along the waterfront for 10 minutes or so, passing over the Bridgewater Canal to Old Trafford, one of Britain’s most famous soccer grounds.

The stadium hosted its first Manchester United match in 1910; the sight of fans making their way to Old Trafford would have been familiar to L.S. Lowry and the weekly pilgrimage to the ground continues today. However, like The Quays, Old Trafford has undergone huge renovation in recent decades and would now be barely recognized by the artist.

The best way to experience Old Trafford—outside match day, at least—is to book one of the regular behind-the-scenes tours. United fans go weak at the knees at the prospect of seeing their team’s dressing room, walking out of the tunnel or sitting in the dugout, but even for those with little interest in soccer, the tour is fascinating. Manchester United is one of the biggest sports clubs in the world, and the tour helps you understand how it became so. 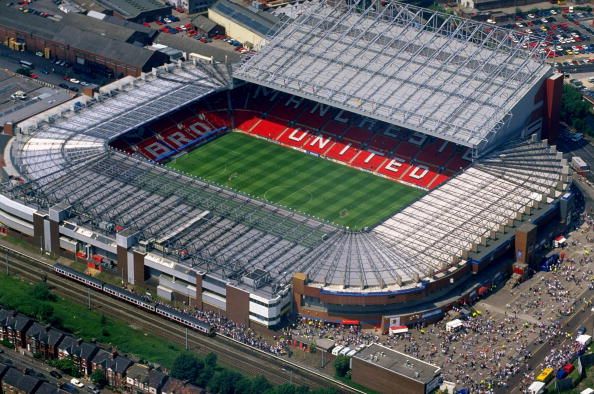 Dating back to the early 1700s Sian Ellis takes a guided tour throu...

Dating back to the early 1700s Sian Ellis takes a guided tour throu...