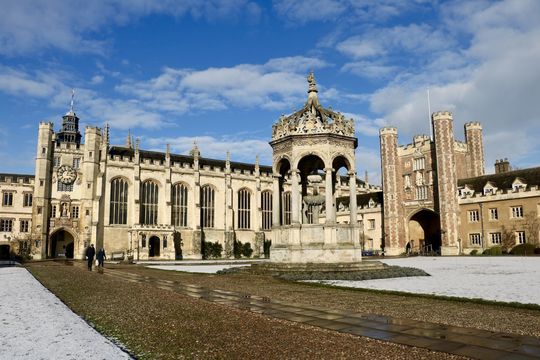 A fountain in Cambridge during winter.Yifan Bai / Creative Commons

Early in the 13th century, it was a town-and-gown dispute that resulted in dissident scholarly monks leaving Oxford and gathering at a small town on the banks of the River Cam at the edge of the East Anglian fens.

Over the next generation or two, other scholars and their students were drawn there to learn and share the community. The first formal college, or academic community, Peterhouse, was organized in 1284. Today, the University of Cambridge is one of the top-ranked such institutions in the world.

Unlike in more metropolitan Oxford, at Cambridge, the present city of 125,000 remains defined by the university, with almost a quarter of its population students. Visiting Cambridge is a visit to campus. During term time, its narrow streets teem with college life and throngs of visitors from around the world. Let not that deter you. Any time of year, its centuries of magnificent architecture, museums, churches, and traditions make for an invigorating and rewarding visit for a day or two.

The county town of Cambridgeshire certainly makes an easy outing from London by rail. Frequent trains from London King's Cross will have you at Cambridge within an hour. By road, an hour or so covers the distance via the M11 or A14.

The town wasn't exactly designed for vehicle traffic, however, and parking in the city center is scarce or expensive. If you are staying over a night or two, the hotel may solve that problem. The Gonville Hotel on the edge of Parker's Piece is one good four-star choice. The University Arms and Hilton City Center are others. For less expensive options, see visitcambridge.org. 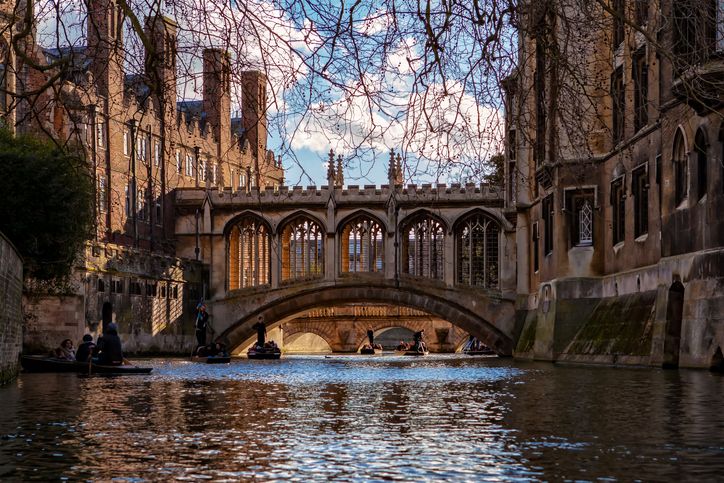 This bridge across the River Cam between the St John's College's Third Court and New Court is probably the most beautiful bridge in Cambridge. This is a view from the north of the bridge which the Kitchen Bridge can be seen in the background and the college second court is on the left.

On the town of Cambridge

As always, the Visitor Information Centre is a good place to start. Cambridge's is at The Guildhall on Peas Hill, conveniently next to the Market Square, home to a daily open-air market in the heart of the city. Pick up maps and guides, book accommodation, check out current events or join an official guided walking tour.

Many of Cambridge's 31 self-governing colleges were founded in the 14th-16th centuries. The ancient quads, chapels, refectories, and libraries are self-contained and enclosed. Most are open to visitors on any given afternoon. Visit historic St. Johns, Trinity, Magdalene, Gonville & Caius, Sidney Sussex, Emmanuel or King's, for instance, to get a first-hand sense of collegiate life that has continued remarkably unchanged over several centuries.

Their colonnades and halls have been home to Prime Ministers and Noble laureates, poets and scientists are literally too numerous to mention.

What to see in Cambridge

Among the most acclaimed of Cambridge's buildings is King's College Chapel, built on the commission of King Henry VI in the late 1400s (though it took 100 years to complete). It is considered among the finest examples of late Gothic architecture extant. The chapel is famed for its service of Nine Lessons and Carols on Christmas Eve, broadcast worldwide on the BBC.

The principal museum of the university's many public museums is the Fitzwilliam Museum on Trumpington Street. Founded in 1816, its collections range widely from books and manuscripts to art and antiquities. For a focus on the town's social history, visit the smaller Museum of Cambridge on Castle Street.

Not surprisingly for a university town, pubs, eateries, and social gathering spots abound in Cambridge. Among the most notable is The Eagle near the Market Square, frequented by students and faculty alike. Biologists Francis Crick and James Watson famously came in one lunchtime and announced they had broken the DNA code.

Perhaps the competitive sport Cambridge is most noted for is rowing. The popular recreational version for students and visitors alike is punting on the River Cam flowing through the center city. Have a go for yourself. You can hire a punt or join a “chauffeured” flatboat for a river view of colleges and gardens at bridge crossings on Magdalene Street or Silver Street. 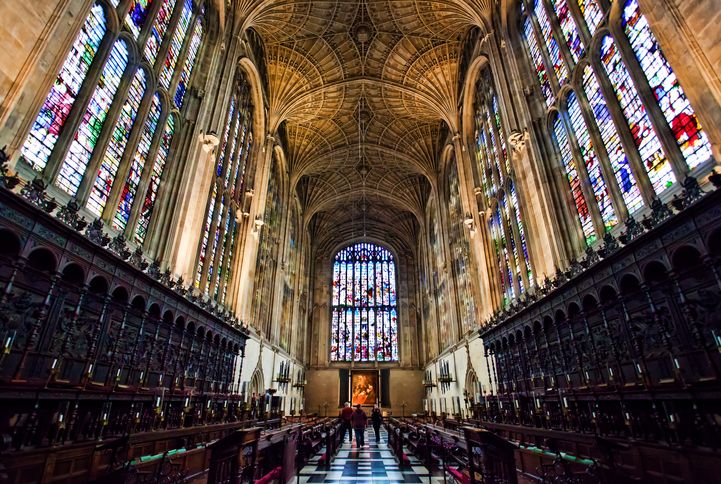 Within a short distance of Cambridge lies no end of interesting visits: To the north, pretty Ely and its magnificent cathedral; to the south, the historic World War II airfield at Duxford is home to the largest aviation museum in Britain (including the American Air Museum commemorating the World War II work of 450,000 U.S. Army Air Force servicemen and their aircraft).

To the east, visit Flag Fen, the National Trust preserve of unspoiled fenland, and New-market, home of English horse racing.

Just a couple of miles from central Cambridge, the Cambridge American Cemetery is the only World War II American military cemetery in Britain, on land donated by the university.

Here are buried the remains of 3,812 servicemen killed in the Battle of the Atlantic or lying in the bombing campaigns over northwestern Europe. Beside the reflecting pools leading to the chapel, the Tablets of the Missing record the names of 5,127 others who never returned. Moving and worthwhile. 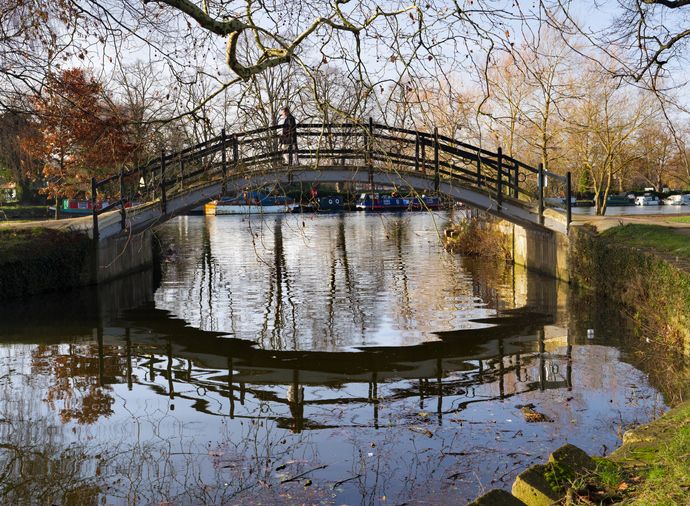 This tubular truss footbridge over the Cherwell River has only just been built. It is part of my favourite walk in Oxford, England; it starts at The River Thames, just upstream of Folly Bridge, winds off on one of its tributaries, the River Cherwell, circumnavigates Christ Church Meadows and also includes the Botanic Gardens, Merton College and Deadman's walk. Although a great walk in all seasons, it comes into its own during Autumn, when parts of the meadows and footpaths along the River Thames glow with spectacular seasonal colour- as seen here.The Tower is part of Magdalen College.