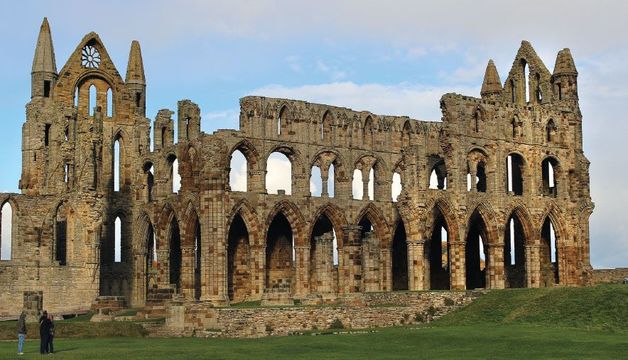 Jewel of the North Yorkshire Coast


High on the headland above the mouth of the River Esk, at the abbey of St. Hilda, in 664 a gathering of church leaders that became known as the Synod of Whitby united the Celtic church of Scotland and Ireland with the Roman church of the Anglo-Saxons and established the dating of Easter. Caedmon, recognized as the first known Old English poet, plied his craft in the 7th-century monastery as well.

Whitby has been around a long time. Captain James Cook learned his seacraft here, and Bram Stoker made the dramatic harbor town the setting of Dracula. By the late 18th century, Whitby was a major commercial whaling port, and a shipbuilding center of some importance. Today, it’s still a working harbor of fishing boats, lobster pots and sightseeing charters, surrounded by colorful narrow medieval streets of shops, pubs and restaurants that give Whitby an undeniable magic charm.


GETTING THERE IS HALF THE FUN, but Whitby isn’t a dawdle from London. The seaport town of 13,000 lies on the North Sea coast—beyond the vast North York Moors. You can get to Whitby by rail via Middlesbrough, where you connect with Darlington for an East Coast Mainline train. You can drive over the moors from York on the A169, or, from the A1(M) head for Guisborough and the A171 across the northern edge of the North York Moors National Park to Whitby.


THE “MUST-SEE” VISIT is Whitby Abbey, perched near the edge of a mesa rising some 200 feet above the river estuary below. After destruction by Viking raiders, the abbey was reestablished as a Benedictine foundation in 1078 following the Norman Conquest. Its massive, powerful ruins tower over the town and define the skyline from the harbor. In addition to the magnificent walls and arches, English Heritage maintains a beautiful exhibition building on site that unpacks the abbey’s history as well as monastic life in the wind-swept wilderness.

A swing bridge over the River Esk connects the old medieval village that grew up beneath the clifftop abbey and the bustling commercial harbor-front town that emerged in the 1600s. The bridge pivots to allow boats in and out of the harbor every half hour—for two hours before and after the 13-foot high tides.

Whitby’s other highlight lies just east of the bridge, where cobbled Grape Lane leads a few yards to the Captain Cook Memorial Museum, celebrating the life and work of Whitby’s most famous resident. James Cook served his seaman’s apprenticeship here in the Georgian home of a Quaker merchant and launched the career that would see him become the most celebrated of English explorers, circumnavigating the globe and charting large parts of the southern Pacific, including the east coast of Australia, New Zealand and the Hawaiian Islands in his three multiyear voyages. 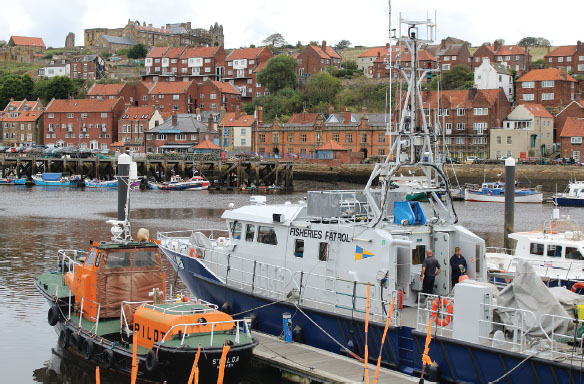 3
Opening into the cold North Sea, Whitby remains a working port for commercial and sport fishing.[/caption]


THE SPIRIT OF WHITBY


With a multitude of options depending on the season, take a boat ride from the central quay. A relatively brief sightseeing ride along the Esk estuary and the immediately surrounding coast is a gorgeous interlude. Whale watching or charter fishing in the North Sea provides a more adventurous option. In the autumn, they fish for mackerel.

The narrow streets on both sides of the river harbor are an eclectic warren of ancient alleys with family shops, saltwater pubs and a quirky mix of contemporary life and historic character. The town’s famous association with Dracula provides just a bit of tongue-in-cheek Goth color to the mix. You can buy inexpensive goods and produce in the cobbled old Market Square and dine well in the evening overlooking the light-spangled riverfront.

A NIGHT OR TWO ON THE HARBOR


THE BEST LOCATED prime lodging in Whitby is The Angel Hotel, right on the harbor front, steps from the swing bridge. It’s also quite modest in cost, a property of J.D. Wetherspoon, with the bright ambience and m enus of a Wethersn family pub. The Angel is popular, and it’s certainly wise to book ahead. jdwetherspoon.com

Whitby is a tourist town, however, and other options include Arundell House on Pannet Park (with rare guest parking), the Resolution Hotel and The George Inn—all within the walking center and the harbor.

The Tourist Information Centre on Endeavor Wharf can certainly arrange and advise on accommodation, as well as provide town maps and the tourist bumph The wharf also provides perfectly located long-term parking for those spending a night or two. 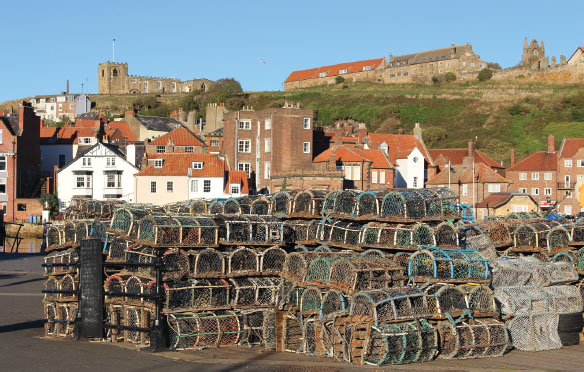 With the abbey ruins perched prominently above, it’s easy to see how the harbor town grew at its feet.[/caption]


IN THE IMMEDIATE NEIGHBORHOOD


WITH AN EXTRA DAY in town, explore the expansive moors of the surrounding National Park with an excursion by steam train on the North Yorkshire Moors Railway, right from Whitby station in the town center. It’s quite a famous scenic journey across the undulating heath to Pickering in classic carriages and style. nymr.co.uk

The driving route south a few miles to Robin Hood’s Bay and on to Scarborough is justly renowned for its scenic glory as well, and can lead on to York.

Part of Whitby’s allure is its isolated setting and location. Plan to do Whitby when you are on an itinerary in the North. Driving, perhaps continue north to the Northumbrian Coast above Newcastle and the Tyne to the Holy Island of Lindisfarne. By train (though it does take some logistical coordination), Whitby makes a good rail itinerary paired with Durham and York. Explore the options at nationalrail.co.uk.