FROM “DEB BALLS” to the Royal Academy Summer Exhibition, the Henley Regatta to Glyndebourne Opera, the great and the good celebrate everything that’s light, warm and beautiful. The RHS Chelsea Flower Show is the lightest, warmest and most beautiful of all.
Taking place in the grounds of the Royal Hospital, Chelsea, the show attracts the world’s most famous gardeners to create breathtaking set pieces defying nature, the seasons and often gravity in their search for perfection. Stunning exhibition gardens are teased, cajoled and forced to sublimity for one exquisite week.
One area of the show, in a small parkland that once hosted the notorious Georgian Ranelagh Pleasure Gardens, features exhibits that are a little more artisan though no less perfect. Everything from Japanese meditational gardens to the messy back yard from a Victorian blacksmith’s forge, there’s not a blade of grass out of place.
My favorite part, however, is the main tent, where the Royal Horticultural Society comes into its own as the ultimate celebrator of plants. The fragrance of thousands of blooms at the peak of their splendor hits as you enter like a wall of heaven. Exhibitors are keen to chat about their personal passions, be they cacti, foxgloves or peonies. 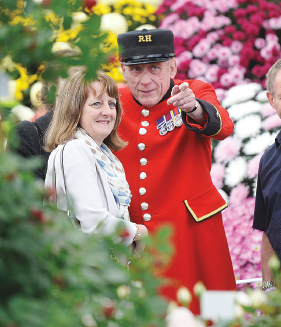 Chelsea Pensioners are happy to welcome visitors to their home at the Royal Hospital.[/caption]

The show is such a huge part of the gardening calendar there’s even a horticultural tradition named for it. Head gardeners in charge of those famous British flower borders in stately homes up and down the country indulge in the “Chelsea Chop,” where they shear away half of each plant in their beds during the same week as the show, encouraging borders to bloom twice as long.

DON’T BE SURPRISED if you spot a flash of pillar-box red out of the corner of your eye. The show is, after all, being held in the Chelsea Pensioners’ back garden. Even if you’re not in town for Chelsea Week, you may be lucky enough to bump into one or two of these revered former soldiers in a local hostelry or find yourself queuing behind one in the supermarket, but you can steep yourself in this most colorful part of British heritage by paying a visit to the hospital itself.
The gates may look closed, but the elegant Christopher Wren palace you walk past on your way to the flowers is actually open to individual visitors all year round. Walk around the beautiful Ranelagh Gardens, visit the small museum and enjoy a coffee and cake in the café. It’s worth remembering, of course, that many of the residents are elderly. Although they like to meet people they appreciate it even more if it’s quietly and with respect.
By far the best way to experience the institution is with a real Chelsea Pensioner as guide, which you can do by booking ahead. I found myself in a group led by the hilarious Dave Thomson, a man with a million stories and an encyclopaedic knowledge of the history of the Royal Hospital. Dave showed us the “berths” pensioners lived in until recently (they now have proper bedrooms), the mess hall and grounds, though the famous chapel is under restoration.
SLOANE SQUARE is easily the best place to start any further exploration of Chelsea. Home to the nearest tube station, it houses the russet-red brick Royal Court Theatre, celebrating its 60th birthday this year. The theatre’s first play, Look Back in Anger, in 1956, produced ripples across the theater world. It’s still producing cutting-edge, world-class material. Jerusalem, starring Mark Rylance, was a sell-out on Broadway a year or so back.
King’s Road is almost as famous as its partner in pop-culture, Carnaby Street. Sadly, much like its West End cousin, this once-cutting-edge, pop-soaked thoroughfare ain’t what it used to be. The relentless march of the chain store has turned it into any other high street. Admittedly a lot of those stores are very lovely in themselves, adding to the area’s swish 18th and 19th-century past, so it’s still worth a stroll.
Don’t miss the little Georgian streets on either side, often painted in delicate rainbow pastels. A serious proportion of these stunning residences were once inhabited by famous people, from Mark Twain to Oscar Wilde, Bram Stoker to Sir Hans Sloane (founder of the British Museum, lover of chocolate and inspiration for Chelsea’s shopping heart, Sloane Square). Use the free, downloadable Blue-Plaque maps of the area for a DIY walking tour.
Given the number of cute tearooms in Chelsea you could be forgiven for thinking the area is one gigantic eaterie. Such has it ever been–it is, after all, the spiritual home of the Chelsea Bun (good luck finding one today, though) and ladies who lunch (still plenty of those around). I’m rather fond of the café at the top of Peter Jones, Sloane Square’s famous department store, now owned by John Lewis. The self-service food’s nice enough, but I go for the vista. High above the city, gigantic plate glass windows flood with light, presenting West London below your feet as you sip. 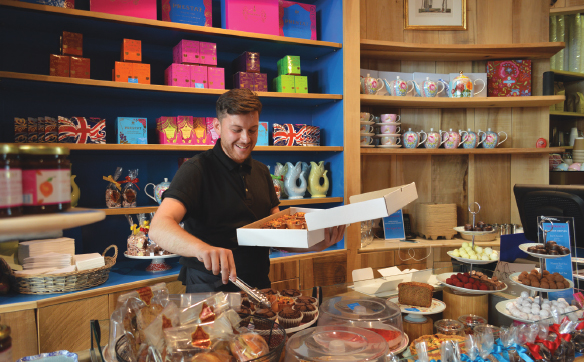 If you’re after afternoon tea, I love Royal chocolatier Prestat’s Café just round the corner in Pavilion Road. It’s teeny, but the service is exquisite, the tea lovely and the cakes gorgeous. Prestat holds a Royal Warrant for chocolate so it’s hardly surprising the cakes have a chocolate theme, but there are other flavours, too. Choose between full, splendid afternoon tea, served in trademark colorful china, and a simple hot drink and cake of your choice. 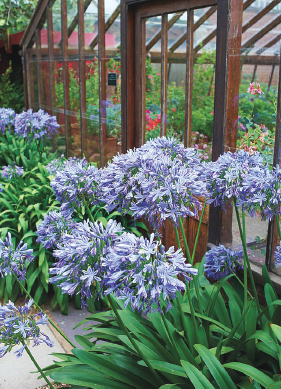 Catch flowers in bloom throughout the year at the amazing Chelsea Physic Garden.[/caption]

Regular readers know I’m a sucker for anything green, anything secret and anything historical. Chelsea Physic Garden delivers each of these in grand form. Established in 1673, by the Worshipful Society of Apocatheries, the garden is an oasis of calm across the road from the Thames. By the 1700s it was the most important center for plant exchange on the planet. We have Sir Hans Sloane to thank for its survival in these days of crazy real-estate prices. Sloane rented the land to the garden in perpetuity, making his will so cast-iron the charity still pays just £5 per annum for this gorgeous walled garden, packed full with historic medicinal and scientifically-significant plants.
There’s year-round interest to be had here, from every February’s famous “snowdrop days” through high summer’s perfume garden to cozy moments in Victorian glasshouses in the depths of winter. Because of the high walls (making the garden so very mysterious from the outside), the garden enjoys a micro-climate enabling normally impossible plants to flourish, including the largest olive bush and outdoor grapefruit tree in the UK.
What makes this such an important place, however, is its serenity. In the height of summer and in the middle of one of the busiest areas in a bustling city, this is somewhere to stop, take a deep breath and literally smell the flowers.