Cycling the Monsal Trail, in the Derbyshire Peak District 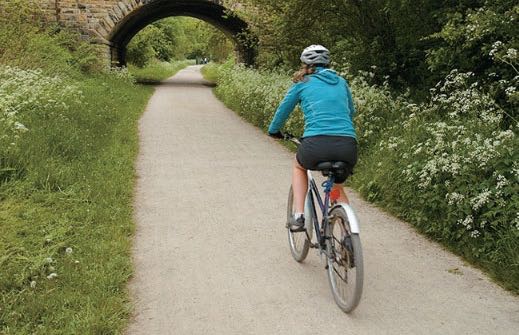 Take an active and easy adventure in the Derbyshire Peak District. Beautiful river valley? Check. Three centuries of industrial history to explore? Check. Bicycle on hand? Check. Skin-tight spandex clothing? No, that’s something I’m sure British Heritage readers would rather not see.

Think of the Peak District and the Industrial Revolution might not be the first thing that springs to mind, but this area was one of the cradles of progress in the 18th and 19th centuries. The technological makeover left an indelible mark, yet there isn’t a smoking chimney or city slum insight. Running from near Buxton to beyond Bakewell, the Monsal Trail illustrates how the Industrial Revolution changed this national park without losing its character.

The Monsal Trail takes advantage of the Midland Railway that linked London and Manchester across the Peak District from the 1860s but fell foul of government transport reforms a century later. The line was closed on the order of Minister of Transport in 1968 and the land it ran through fell into disuse. Twelve years later it was given to the Peak District National Park, the rails were ripped up and the Monsal Trail was established.

Since the trail follows the old railway line, it’s a smooth and level path. Its nine-mile length might be too much to walk in one day while leaving time for a little exploration, so the best tip is to hire a bicycle from Wye Dale at the Buxton end of the trail. I’m by no means an expert cyclist, but even I can manage the flat Monsal Trail. Embrace the little wobbles that you’re bound to start with and greet your fellow cyclists, walkers and dogs with a friendly smile or word of greeting. Nobody goes at the pace of Bradley Wiggins here. Trust me, you won’t feel out of place.

The creation of the railway helped to open up this part of Derbyshire. Previously, traveling between Buxton and Bakewell would have taken a few hours. With a rail link, it was cut to a few minutes. Free movement wasn’t to everybody’s taste; the critic John Ruskin complained that “every fool in Buxton can be in Bakewell in half an hour and every fool at Bakewell in Buxton.” But there was little doubt that the railway boosted the local economy.

The first evidence of this is the lime kiln that towers to the left after a few minutes of pedaling. Park your bike and follow the path to the top of the kiln, where you can see one of the wagons used to haul limestone and coal from the railway to the kilns. As long as you have a head for heights, it also gives a good view of your progress so far. Just don’t stop too long—like the first steam trains, momentum is everything at this early stage!

The Monsal Trail follows the River Wye as it wends its way from west to east, rising in Buxton and eventually joining the River Derwent a couple of miles beyond Bakewell. Where the trail crosses the river, viaducts lift it over the valley floor. Where the gentle contours of the railway meet steep outcrops of harder rock, tunnels cut through. Previously, the trail bypassed the tunnels on paths that went around them, but since 2012 the old railway tunnels have been reopened, making traveling the length of the trail on two wheels much easier. As long as you are careful to keep an eye out in the reduced light and are wary of the sometimes-damp surface, there’s no reason why you can’t fly through the five reopened tunnels with the ease of the old locomotives.

Further evidence of the Wye valley as an industrial heartland can be seen farther on. About halfway along the trail are two large cotton mills—you really can’t miss them. Both have been converted into apartments, but their former use is obvious. Big, square stone buildings, were sited along the River Wye to make use of its water as a source of power.

The first to appear is Litton Mill; climb the path up the side of the Litton Tunnel for an impressive view of the complex. What the new residents who now live there might not know is that the owners of this particular mill, Ellis Needham and Thomas Frith, were renowned for the poor treatment of their workers. They took advantage of pauper children, who worked 14-hour shifts using equipment with no safety catches and were rewarded with draughty dormitory accommodation and very basic food. Its notoriety was such that Charles Dickens was said to have based Oliver Twist on one particular Litton survivor’s testimony.

After another tunnel, park up by the bench on the left and wander downhill to take in the view of Cressbrook Mill. This was built by the founder of the industrial factory system, Richard Arkwright, the inventor of the water-powered spinning machines that necessitated the big mills. Thankfully, the management here was kinder to its child workers. Not only can you see the impressive mill building, but also the apprentices’ cottages used to house its orphan workers, and the weavers’ cottages farther up the hill. Arkwright’s new machinery could only spin thread, not weave it into cloth. Weavers—usually men because women and children were cheaper to employ in the mill—worked in the upper stories of their homes, the large windows letting in as much light as possible to help them work.

The best view of the trail is a short distance, so it’s back in the saddle. The Headstone Viaduct marks where the Monsal Trail leaves the River Wye for a while. Nearly 100 yards long, the view from the top of the viaduct shows the river disappearing south along a limestone corridor. It’s worth putting the cycle to one side once again and tramping down the path to the river. The views from the top of the viaduct are great, but from the bottom they are equally fine. Only from here do you get a sense of the scale of the building work that must have gone into making this railway.

Not everybody was impressed. The railway was not popular when it was first mooted. The Duke of Devonshire didn’t want the steam trains to blight the view from his windows at Chatsworth House and refused it passage through his grounds, so the railway had to take a different course and a viaduct constructed to carry it. The Duke of Rutland had similar concerns for the view from Haddon Hall, and insisted that the railway company build Haddon Tunnel farther along the line.

Both dukes eventually realized the potential of the railways and changed their attitudes, but that created another problem—one peculiar to the British aristocracy. The railway station would be the first point of contact between a visitor and the ducal estates, so the greeting had to be suitably grand. The Duke of Rutland insisted that Bakewell station carry his coat of arms on the stonework and its ornate architecture styled to reflect its patron. The Duke of Devonshire thought that his guests couldn’t possibly frequent a station used by another duke, and insisted on an alternative being built. The result, Hassop station, is the next stop. The end of the journey is near, but the facilities here are too good to miss. A café and bookshop provide a bit of comfort and a blessed release to the backside. 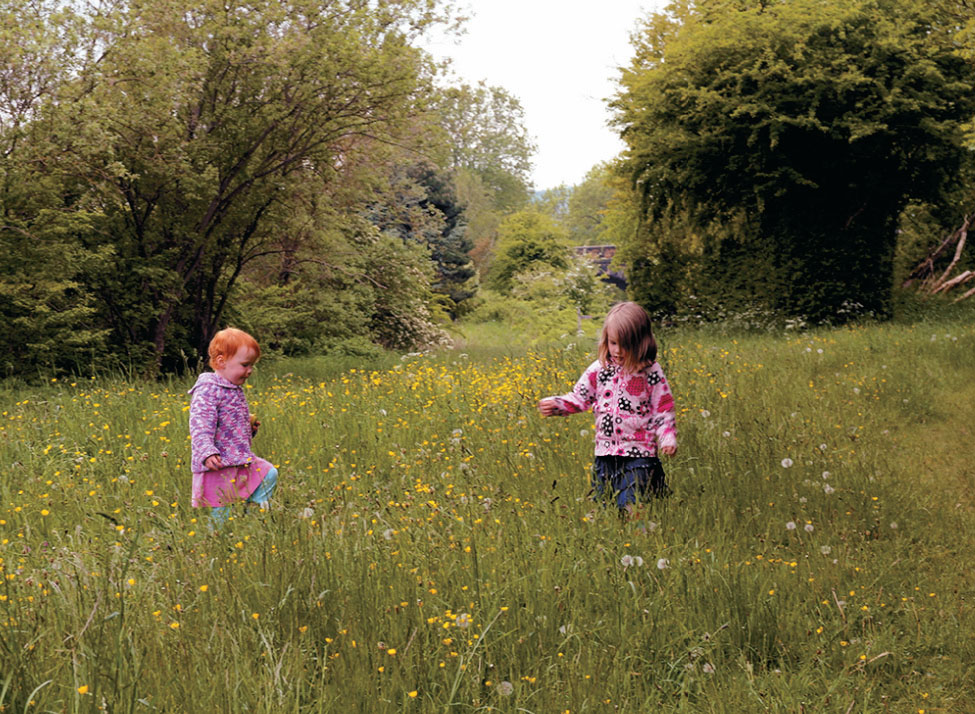 From Hassop, the homeward stretch is on. When Bakewell station appears, eight miles after leaving Wye Dale, there should still be plenty of time left to explore town. Freewheeling from the station downhill to Bakewell—the first bit of gradient encountered—is like descending through the centuries. The industrial heritage of the last 300 years is left behind in favor of the Middle Ages. Bakewell is a market town that existed long before the railway opened and has continued to thrive since the railway was closed.

Crossing the cute 13th-century bridge, you should look both ways. To the right, the grass hill between the river and the curve of the road is all that remains of the Norman motte-and-bailey castle. To the left is a quintessentially English river scene: strolling walkers eat ice cream amid dabbling ducks.

All the cycling means that a treat is in order. The Bakewell pudding—whatever you do, don’t call it a Bakewell tart in front of the locals—is a jam pastry with an egg and ground almond filling. Local lore says that it was first made by accident in 1820 when a cook misunderstood her instructions and spread the egg and almond paste on top of the jam rather than mixing it in. The result was a pleasant surprise. The Old Original Bakewell Pudding Shop provides the food, a choice of four pubs nearby offers liquid refreshment. Choose any of the hostelries in Bakewell center and you won’t go wrong.

All that’s left is to find a place to park the cycle. The Rutland Arms is Bakewell’s coaching hotel, originally designed to house travelers who overnighted there from the post coaches as they crossed the country. We might not have covered as many miles as those first travelers, but surely we’re worthy of a bed. Having undergone a much-needed refurbishment over the last couple of years, the Rutland Arms is back as Bakewell’s premier accommodation and worthy of a visit. 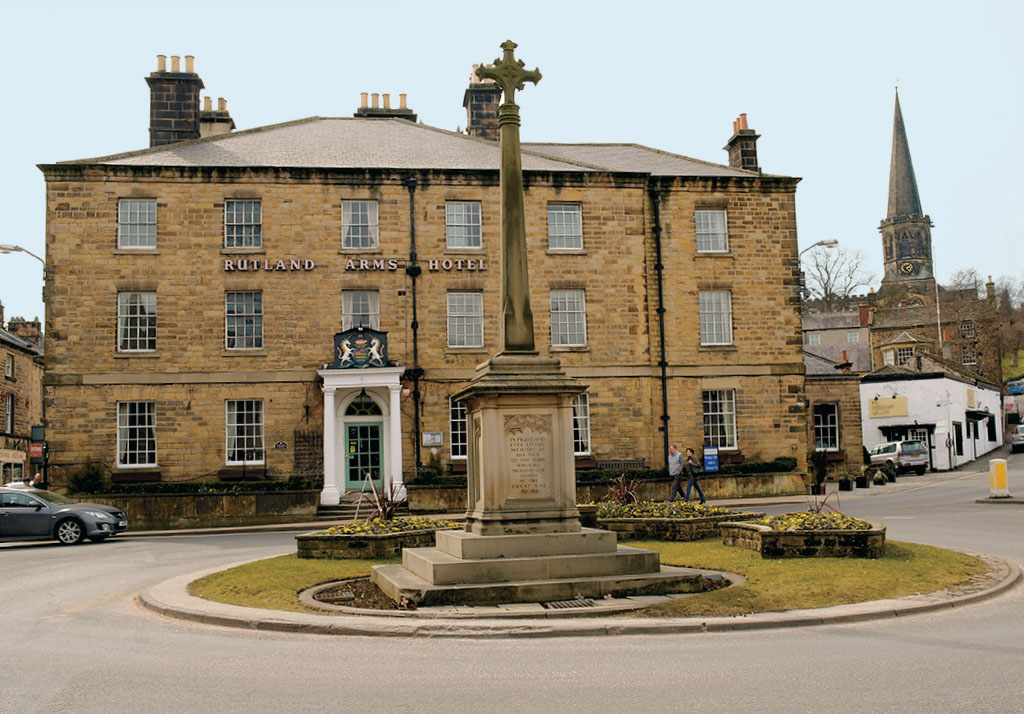 Of course, the cycle needs returning, but that’s for tomorrow. On the return trip, you can anticipate the delights of Georgian Buxton and its spa waters to revive the weary legs!

It’s best to start your day or two on the Monsal Trail at the Buxton end. You can get there by train from Manchester, which links to most other major routes across Britain. If you need a bed for the night in Buxton at the start or end of your journey, the Palace Hotel is situated next to the train station and is Buxton’s grandest.

At the Bakewell end, the Rutland Arms is the oldest and best place to stay. You could make the journey along the Monsal Trail and back in a day, although that wouldn’t leave much time for exploring the Bakewell end.

You can find details about the Monsal Trail and a map on the Peak District National Park website. Cycle hire is available near both ends—from Blackwell Mill cycle hire at the Buxton end or Hassop station near Bakewell.