Jane Austen meets the Romans on an easy day excursion 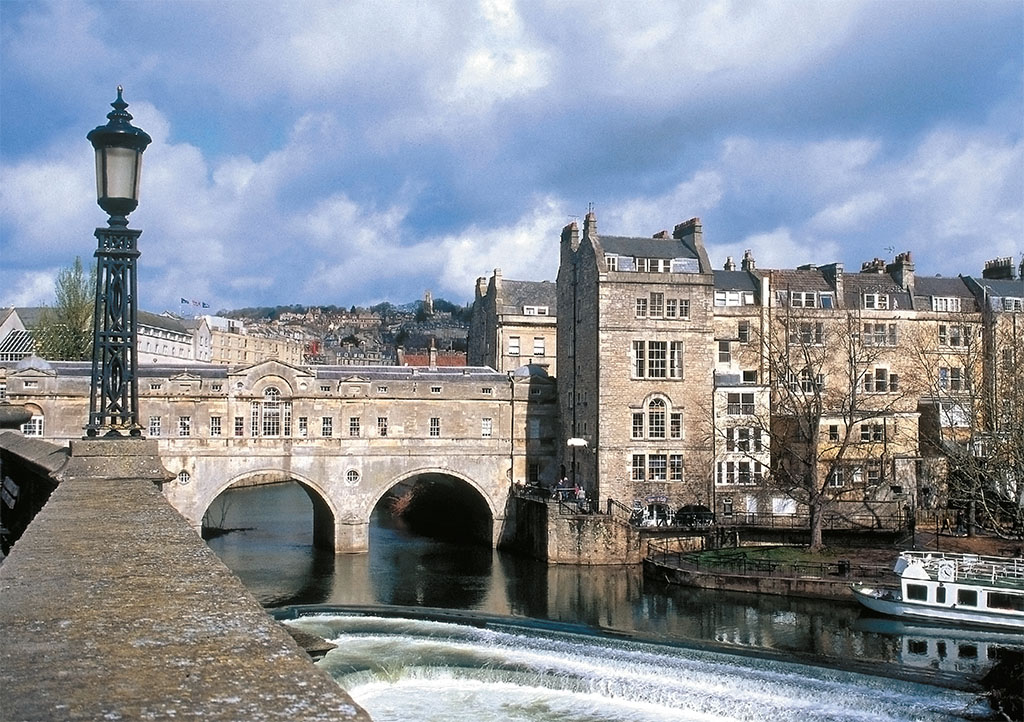 Designed after Florence’s Ponte Veccio, shops and cafes line Pultney Bridge over the River Avon weirs in the heart of old Bath.[/caption]
Everyone who has ever been to Bath knows that you cannot possibly see Bath in a day. There is just too much to see and do in England’s most popular inland “resort.”
If you cannot begin to see all of Bath in a day, however, you can certainly have a wonderful introduction to the historically rich and beautiful small city. Staying for a few days or a week in London? Bath is the perfect day excursion from town by train, the one place to capture the maximum Englishness and English history in a day.Here is how to do it.

Getting to Bath is easy


Take the train from Paddington Station. Trains run to Bath every 30 minutes, on the hour and the half. After 9 a.m. the best ticket deal is a cheap day return ticket to Bath Spa, currently £27.70. It is a 90-minute ride to the west through the Thames Valley, Berkshire and Wiltshire.
You alight at Bath Spa virtually in the middle of Bath. Make note now of return train times to London. Coming out of the station, you will see Manvers Street straight ahead. In the middle distance will be the unmistakable tower of Bath Abbey. At a readily recognizable stop on Manvers Street, you can catch colorful City Sightseeing hop-on, hop-off, double-decker buses that present Bath in circuitous sightseeing tours. In just less than an hour you get a great introduction to the city’s 2,000 years of history and a superb panorama of the elegant Palladian architecture birthed in Bath’s 18th-century heyday as the playground of England’s gentry and minor nobility. If you stay aboard, the bus returns you to where you started.
If you’d rather set out on foot, follow Manvers Street for a few blocks toward the abbey and the way will open into a broad piazza, with the beautiful Parade Gardens and the River Avon to your right, and the abbey and the heart of historic Bath to the left before you. You can catch CitySightseeing there as well.
[caption id="Bath_img2" align="aligncenter" width="1024"] 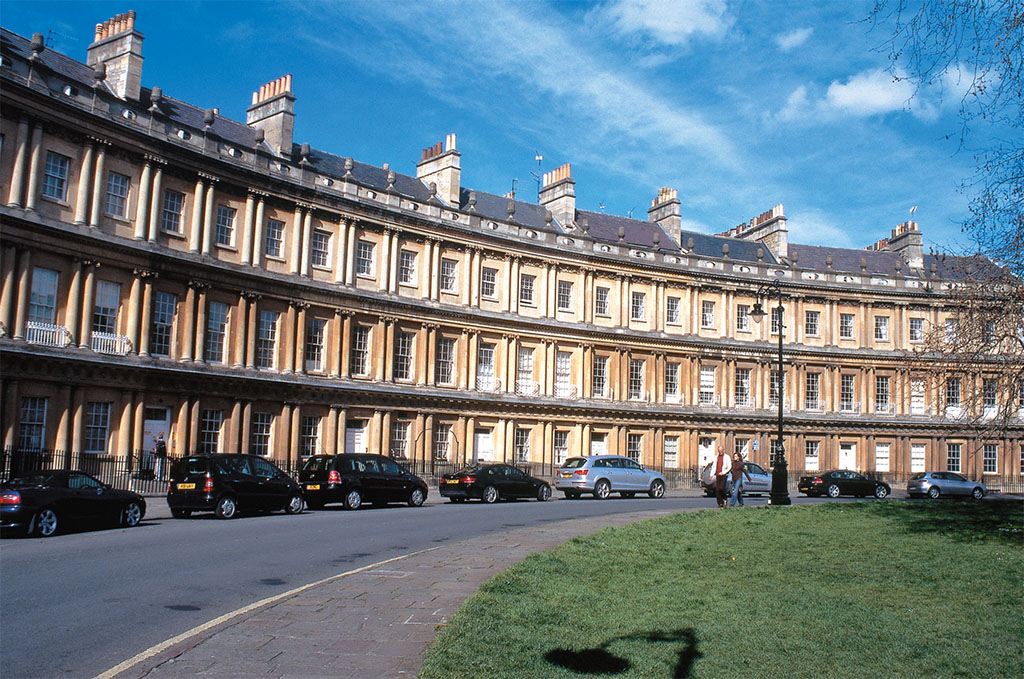 Among the notables who called the crescent terraces of The Circus home were David Livingstone, William Pitt, Thomas Gainsborough and Clive of India.[/caption]
[caption id="Bath_img3" align="aligncenter" width="806"] 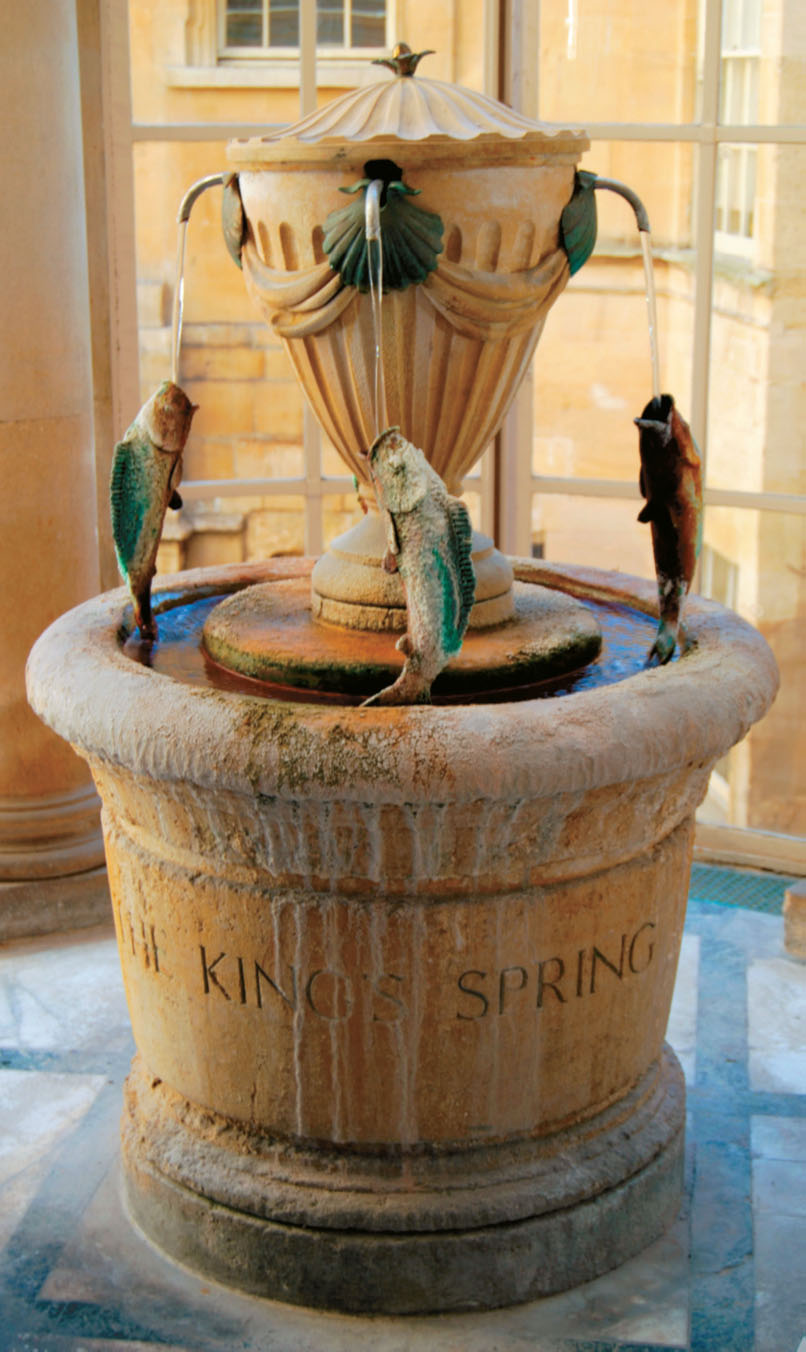 Chalybeate water rises in The King’s Spring to the 18th-century Pump Room.[/caption]

’The well-to-do had gout because of their rich, fatty, fiber-deprived diet’


Around the broad square are a variety of pub and snacking options, and there are public conveniences in the oasis. In the square next to the abbey, drop in to the Tourist Information Centre is the place to pick up detailed street maps and guides.
Whether you opt to take the CitySightseeing panoramic or not, the place to begin on foot is the Roman Baths, just across another broad pedestrian square from Bath Abbey. There are hundreds of Roman sites, excavations, villas and digs in Britain; this is the grandest and most extensive. The natural hot springs at Bath made the town a major R&R facility and religious site for Romans in Britain. It is all here, well-presented, and the springs that flowed for them flow today into the 18th-century Pump Room above.
The water itself segues nicely into Bath’s revival in popularity in Georgian days, when the medicinal benefits of both drinking the chalybeate water and bathing in it were therapeutically recommended. Enough of the well-to-do classes had gout and gastrointestinal problems because of their rich, fatty, fiber-deprived diets to make the town a bustling success. In fact, it is still fashionable to take such a lunch or tea in the ornate original Pump Room. You can certainly see the room, and even drink the water, without staying to tea.
[caption id="Bath_img4" align="aligncenter" width="1024"] 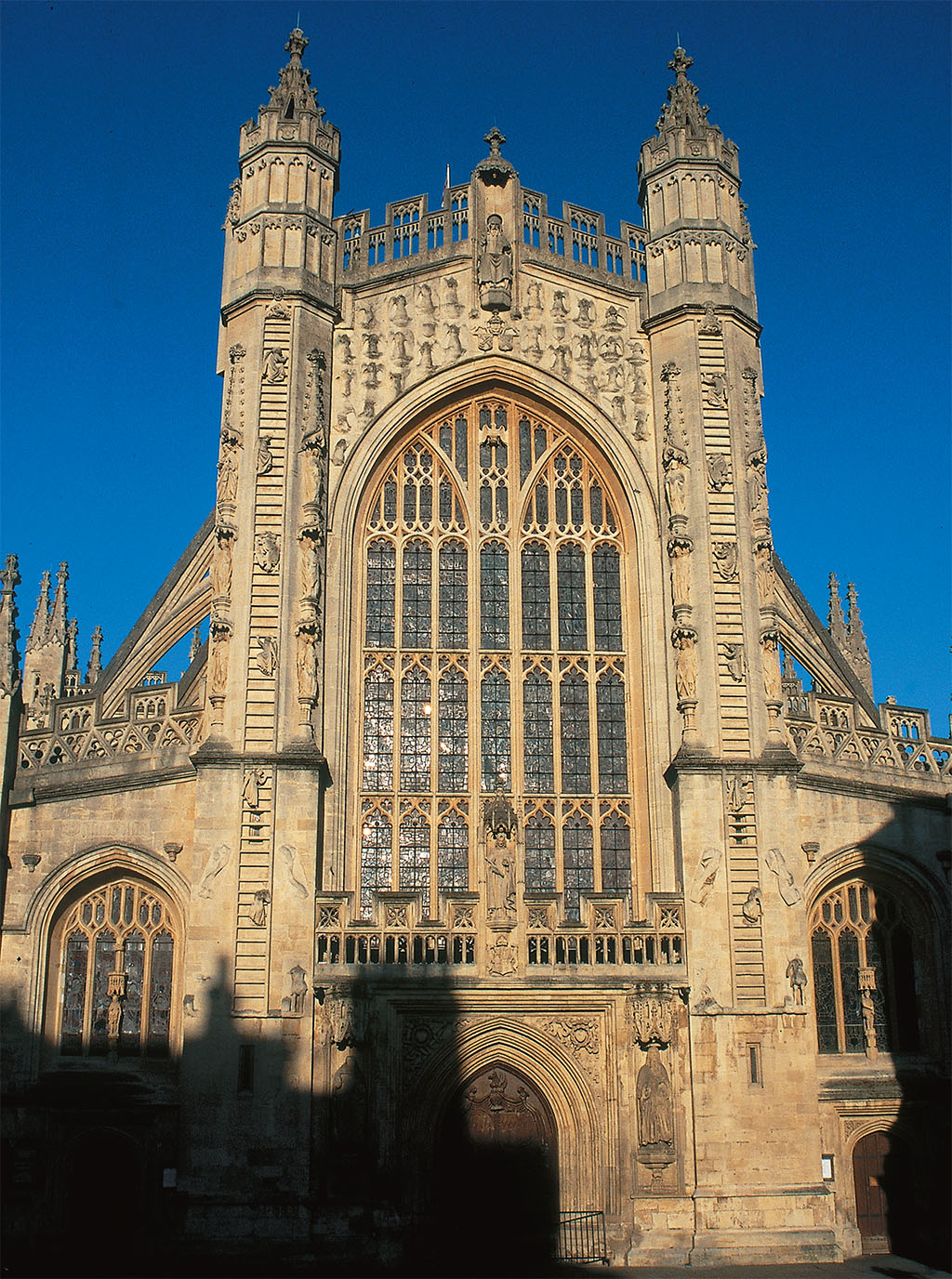 One of the last great English pre-Reformation churches, Bath Abbey inspires with its soaring buttresses, towering windows and awesome fan-vaulted ceiling.[/caption]
Across the forecourt sits Bath Abbey. This was one of the last great abbey churches built before the English Reformation and the dissolution of the monasteries. Seat of the bishop of Bath and Wells, it is a beautiful, human-scale cathedral church. The magnificent fan-vaulting on the ceiling is reason enough to go inside. Edgar was crowned king of all England on the site in 973.


The square that forms the abbey’s forecourt centers a pedestrian district spreading in all directions, complete with buskers and crowds any time of the year.Options for lunch spill over every block,with bakeries, pubs and restaurants of every description, and plenty of choices for street food from kebabs to Cornish pasties.
If you head uphill to the north, Union Street becomes Milsom Street. This is the historic, fashionable shopping street where Jane Austen’s heroines and the author herself did the shops.

‘Milsom Street is the historic, fashionable street where Jane Austen’s heroines and the author herself did the shops’ 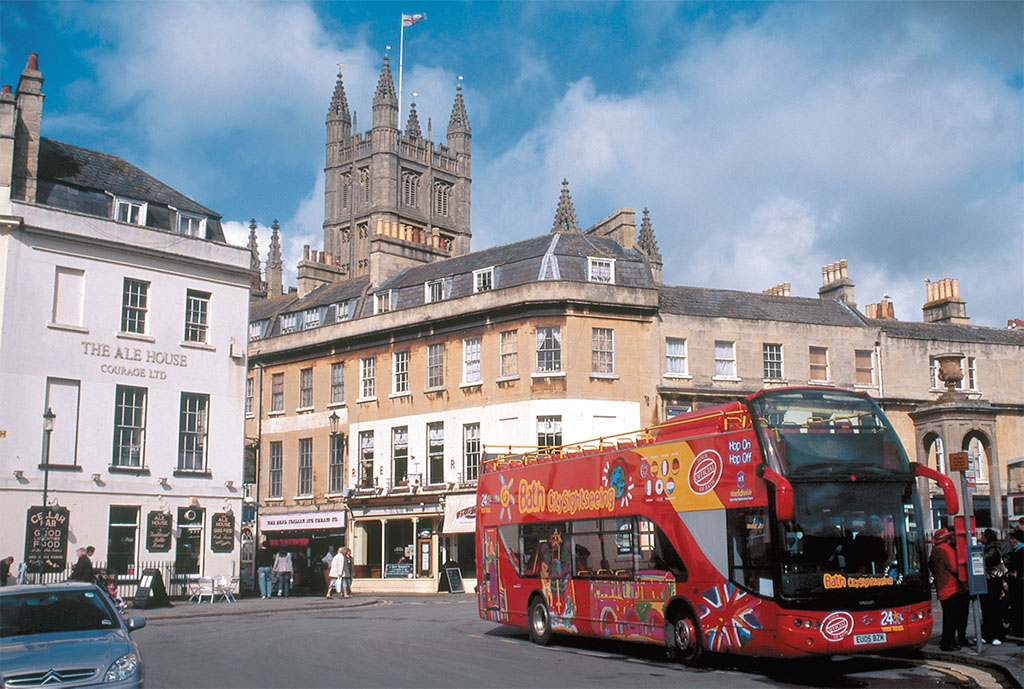 Catch a bus across from Parade Gardens for an hour-long panoramic of Bath, then set off on foot to explore the town.[/caption]
At the top of Milsom Street lie the Assembly Rooms. This was the social center of Georgian Bath, where the glitterati of the day gathered almost every evening for a steady stream of concerts and balls. The rooms themselves are an accurate reconstruction, following the building’s destruction in World War II bombing. The elaborate crystal chandeliers are original.
The Fashion Museum (formerly the Museum of Costume) adjoining the Assembly Rooms is one of the finest in Britain. It is a walk through the centuries of English fashion, from the days when folks made their own material to the present, entertainingly and colorfully presented. Unhappily, unless you choose to make a beeline for the museum, it may be one thing you will have to leave for another visit.
Just a block to the west sits The Circus, one of the city’smost famous and frequently photographed examples of the majestic Palladian architecture that dominates the city. All those gouty gentlefolk who came here to mend and socialize back in the late 1700s? In their socially driven need to keep up with each other, they built one of the most complete, most beautiful neo-classical cities in Europe. The Circus is a 360-degree representative. Three arcs of elegant Georgian terraces complete a circle.The profusion of classical columns and the pictorial frieze that adorns them give The Circus a reputation as one of Britain’s great architectural wonders.
Another block west on Broad Street opens out onto the Royal Crescent. Though it is hardly the only Palladian crescent in Bath, the Royal Crescent is the unquestionable king. Seated imposingly on the high ground overlooking Royal Victoria Park and the Avon valley, the elegant row of town houses designed by John Wood proclaimed the prestige and wealth of their owners. No. 1 Royal Crescent is open to the public, a superbly appointed museum to the age and the way of life in Bath’s social prime.
From the Royal Crescent, you can walk downhill through the Crescent Gardens and Royal Avenue or go back to the Circus and follow Gay Street down. Either way, you will emerge at Queen Square. On the east side of Gay Street, the Jane Austen Centre prov ides a good introduction to Bath as the novelist knew it when she used the city as a setting for Northanger Abbey and Persuasion.
[caption id="Bath_img6" align="aligncenter" width="1024"] 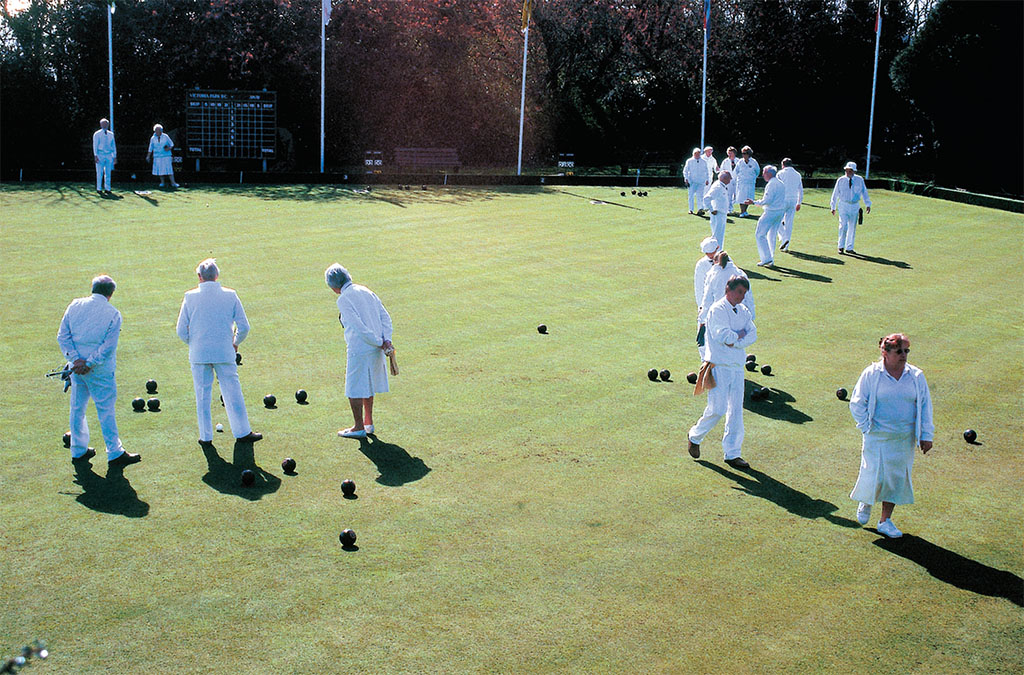 Bowlers enjoy a spring afternoon on the wellmanicured greens of Royal Victoria Park.[/caption]


From Queen Square, it is only a couple of blocks back to lower Milsom Street and the pedestrian precinct. Of course everyone paces himself differently, and has a different amount of stamina, but that is probably a full day. There are plenty of places for refreshments before the short walk back to Bath Spa station.

Bath is worth a stay


Should you be tempted to return, Bath offers the range of good, convenient hotels and B&Bs you would expect in such a popular destination.On another visit, you might see the excellent Holburne Museum of Art, the Building of Bath Museum, the Postal Museum, the Herschel Museum of Astronomy (where William Herschel discovered the planet Uranus in 1781) or the American Museum on Claverton Down.
You might also take time to poke around the shops, including those of some 300 antique dealers scattered through Bath’s shopping lanes. Or wander up Lansdown Street to Lansdown Crescent and the upper town. It is quite a climb, but affords unparalleled views over the city and the valley of the Avon. But that is all for another day.