Cabmens’ Shelters and a Bird on My Head 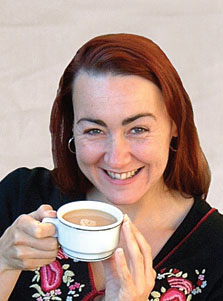 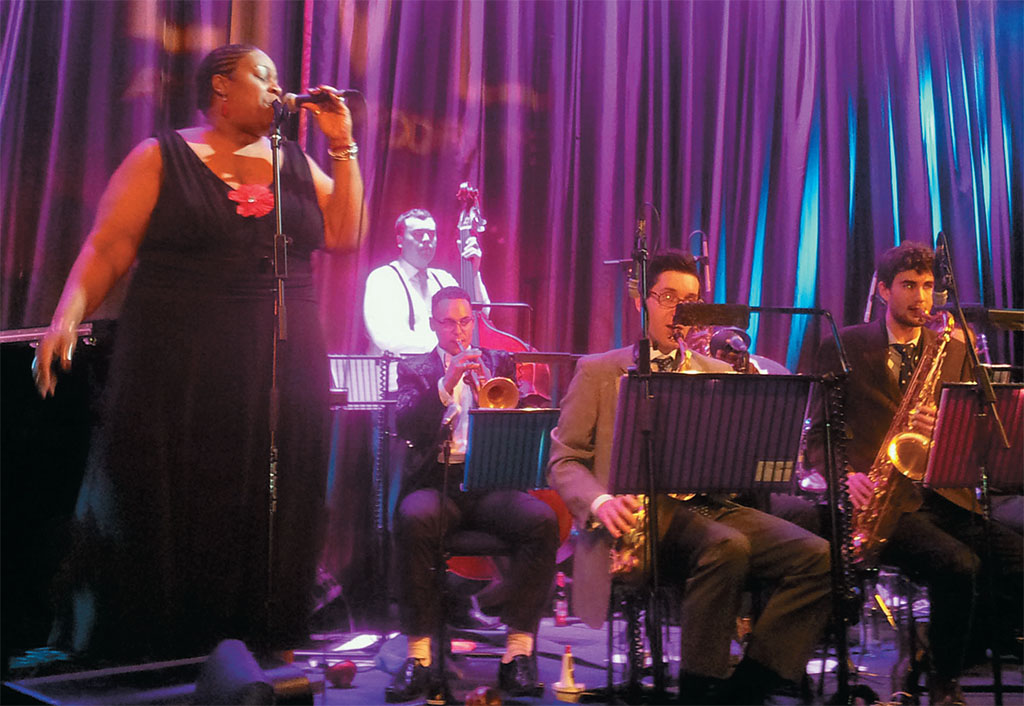 THERE’S NO DOUBT ABOUT IT—the recession in Britain is, like the truly unpleasant weather we’ve had for months on end now, biting hard. Shops are shutting, events scaling down and long-established traditions struggling. Only the very wealthy are able to continue exactly as they were, but that doesn’t mean the rest of us spend every night watching TV (despite the ice, snow and gales outside).
A perhaps unexpected reply to an austerity pinching like old corns has been a burst of creativity, a fresh interpretation in the boundaries of entertainment to create concepts that use spaces hitherto unexplored, art forms mashed up and refashioned into something truly different, and times of day that ’til now haven’t been used.
Take The Hippodrome, for example. Slap, bang in the middle at Leicester Square, this once-august theater was reinvented into a casino last year, firmly in the Vegas mode. Slot machines and roulette tables do little for me, but I am a firm fan of the fabulous supperclub upstairs in the Matcham Room; I wrote a few months ago about seeing singer Julian Ovenden there. But this is a 24-hour venue and it seemed a shame not to use the small hours, too. They’re trying out all manner of entertainments—cabaret, burlesque, alternative-circus—and something that really appealed to me, a dance night reminiscent of the clubs of the 1930s and 40s. Trumpeter Jay Phelps, crazy for the music of Duke Ellington and his ilk, has created an intimate dance band that is at once authentic and fresh for a night known as Jay’s Jitter Jive. His singer, Lauren Dalrymple, reminded me of all the great Jazz divas of the age without aping any of them—she’s her own woman and I loved her for her originality. My pal Simon Selmon and his dance partner of the London Swing Dance Society, who hold regular lindyhop classes throughout the city, were there to demonstrate moves, and to dance with guests throughout the evening. I was entranced. And yes, of course I danced.
The whole idea of the evening is that it’s late. The set didn’t start until 11 p.m., which, given London’s creaking tube system, does present a slight issue of the journey home afterwards. There’s talk of trying to keep the tubes open longer, though that’s hard because the system’s so old they need all the downtime they can get for maintenance. In the meanwhile, for anyone outside Zone One, like me, a black cab is a pricey option. No one should ever take a non-pre-booked minicab and driving in central London is a nightmare, which leaves night buses. I hadn’t taken one for years; they have something of a reputation, but that evening I thought I’d try the N1, which goes from Tottenham Court Road direct to the bottom of my road in Greenwich. I came to the conclusion that the bad rep is undeserved. My journey was clean, quiet and unthreatening, largely shared with chefs,waiters and West End musicians knocking off from work. My particular bus runs half-hourly throughout the night. I have since talked with other people about their experiences and they largely agree that, perhaps with the odd Saturday-evening-drunks exception, night buses aren’t the scary no-go zones they used to be. If you’re ever caught out, they are a serious alternative option to the scarily expensive-after-10 p.m. black cabs.

I CONFESS TO IMPINGING

on London cabbies in another way this month, too (I DO love them, honest, Guv!). I have always adored the little Cabmens’ Shelters you’ll see dotted around town. Looking a bit like grand garden sheds, it’s easy to walk straight past these adorable examples of Victorian street furniture without even noticing them. They were built between 1885 and 1914 by The Cabmen’s Shelter Fund, as a place where hansom cab drivers could stop off and enjoy a cup of tea and a meal away from the elements. Of course, in those days taxis were horse driven, and the shelters still have rails for hitching ponies while the cabbies were inside. Of the 61 shelters built, only 13 remain now. You can find them all over town, from Chelsea Embankment to Temple Place, Hanover Square to Grosvenor Gardens and, perhaps incredibly, they are still used for their original purpose. Until recently they have been strictly cabbies-only, but recently a few of them have quietly started serving the public. As soon as I heard that, of course, I had to visit one and a bunch of us descended on the Russell Square shelter one lunchtime, slightly nervous. We thought we might only get as far as the little hatch that serves take-out, but on shyly enquiring if we could sit-in, we found ourselves inside the closest I have ever come to a TARDIS, with a tiny kitchen at one end, bench-seats and formica tables the other. The Russell Square hut has recently been spruced up, but some of the older ones are covered in memorabilia and photos. Excellent greasy meals of the full English breakfast variety and giant mugs of tea were dispensed for less than the price of a pint. I am told that a lady takes over in the evenings serving Thai food. I am definitely going back. 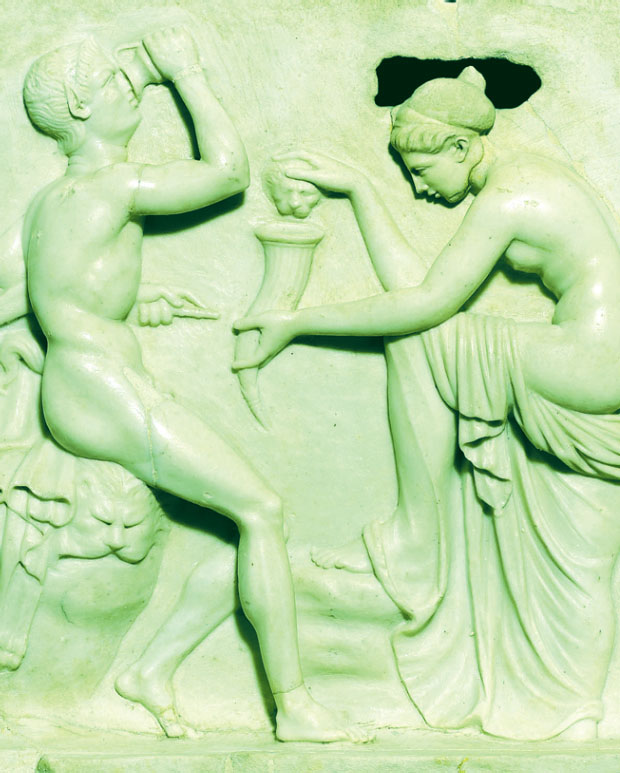 COURTESY OF THE BRITISH MUSEUM

The West End might be enjoying a Golden Age, but so are its prices, and much as I love to go to the big-hitter shows, I am glad that they are currently being rivalled by some exciting fringe productions pushing boundaries in both performance style and venue. I have been to two “immersive” productions this month, as different from each other as you could get, but fascinating in their own way. The first, In The Beginning There Was The End, was held in a labyrinth of disused laboratories in the bowels of Somerset House on the Strand. In very small groups, the audience entered a freakish world of “weird stuff,” where actors in lab coats welcomed us to the public face of a fictitious top-secret scientific facility clearly hiding more than it was showing. Just as we were part way through the “public tour” by what I can only describe as Stepford Scientists, the lights went out and things started to go very wrong. A wall fell away and we found ourselves in the areas the authorities didn’t want us to see: experiments getting out of hand, inventions veering out of control, robots developing minds of their own and a mass-walkout of employees for undisclosed reasons. It was quite baffling—but fascinating, too, and a great example of theater companies working with the tough times to find new audiences and new spaces.
As soon as I heard about The Salon Project at the Barbican’s Pit Theatre, I knew I had to be a part of it. A couple of months before the event, spectators get an email requesting their measurements. On arrival, each member of the audience is dressed in a costume specifically designed for them; their hair and make up is created by an army of backstage artists as they are transformed into turn-of-the-last-century salon guests. They are then shown into the grand lounge of the gracious salonniere, given a sparkling glass of fizz and enveloped in an evening of fin de siecle entertainment with amodern twist. Talks from the great minds of the day—different every evening, I understand—which, although perhaps discussing 21st-century topics, are very much in the style of the grand salons of the past. Tableaux, music, interpretive dance and earnest conversation with fellow guests followed, under the gentle glow of chandeliers, the gleam of age-spotted mirrors and the slightly ominous chiming of the clock, reminding us that the great age of Victorian/Edwardian salon culture had a very rude awakening.
If I am completely honest, the best bit about the evening was the dressing up. There was much excitement backstage for my costume as someone had decided to give me a hat finished with an entire stuffed bird, that the crew had all been eyeing up. Spending the evening with a bird on my head, some rather alarming distinctly green makeup and looking like a cross between Morticia Adams and Lady Bracknell was marvellous fun, though I confess that when that clock finally chimed for carriages, I was rather relieved to take the hat off. I had a headache from the sheer weight of it the entire next day. Untitled Projects, who presented the evening, haven’t decided whether to repeat it yet, but given the entire run sold out within days of going on sale, I expect it to return and I will go to anything else they produce.

I COULD NOT CONSIDER this month’s column complete without mentioning the extraordinary exhibition Life and Death—Pompeii and Herculaneum at the British Museum. Featuring artifacts, murals and even one or two of those haunting casts of the unfortunates who lost their lives in the ancient disaster, the exhibition focuses on the human, everyday world that these Roman citizens enjoyed. I’ve been to both sites and had feared I might be replicating the experience. But it was completely different, with carefully curated objects taking us on a journey through the streets, houses and family lives of Pompeii’s doomed populace, citizen, slave and freedman alike in an alternative way. The most intimate of objects, from personal grooming items and paintings from the bedroom, through a child’s crib (found, tragically, with baby and its comfort-blanket inside, though thankfully not displayed as such) to jewellery found on the people themselves, this is emotional stuff in a way that starts as a slight ache in the heart and ends as a feeling of true poignancy to the soul. New discoveries are constantly being made at Pompeii, but human pain has not altered in 2,000 years.
Phew. Next time I have ambitions to get very chocolaty indeed, tickets for a West End show and plans for a Royal picnic out of town.