There’s a reason why Chepstow Castle is the oldest stone castle in Britain. Whoever controlled Chepstow controlled access to South Wales. Where the River Wye empties into the Severn estuary, the market town of Chepstow sits on the Welsh side of the border. Across the Wye is Gloucestershire. Chepstow guarded not only the most convenient river crossing of the Severn into Wales, but also the gateway to the Wye Valley, wending north into the Marches.
Until the new Severn Crossing was completed a few miles downstream in 1996, it was difficult to get to South Wales without passing through Chepstow. Even today, passing through Chepstow is what most people do. Like scores of small market towns across Britain, however, the village richly repays stopping to visit for a day or two. 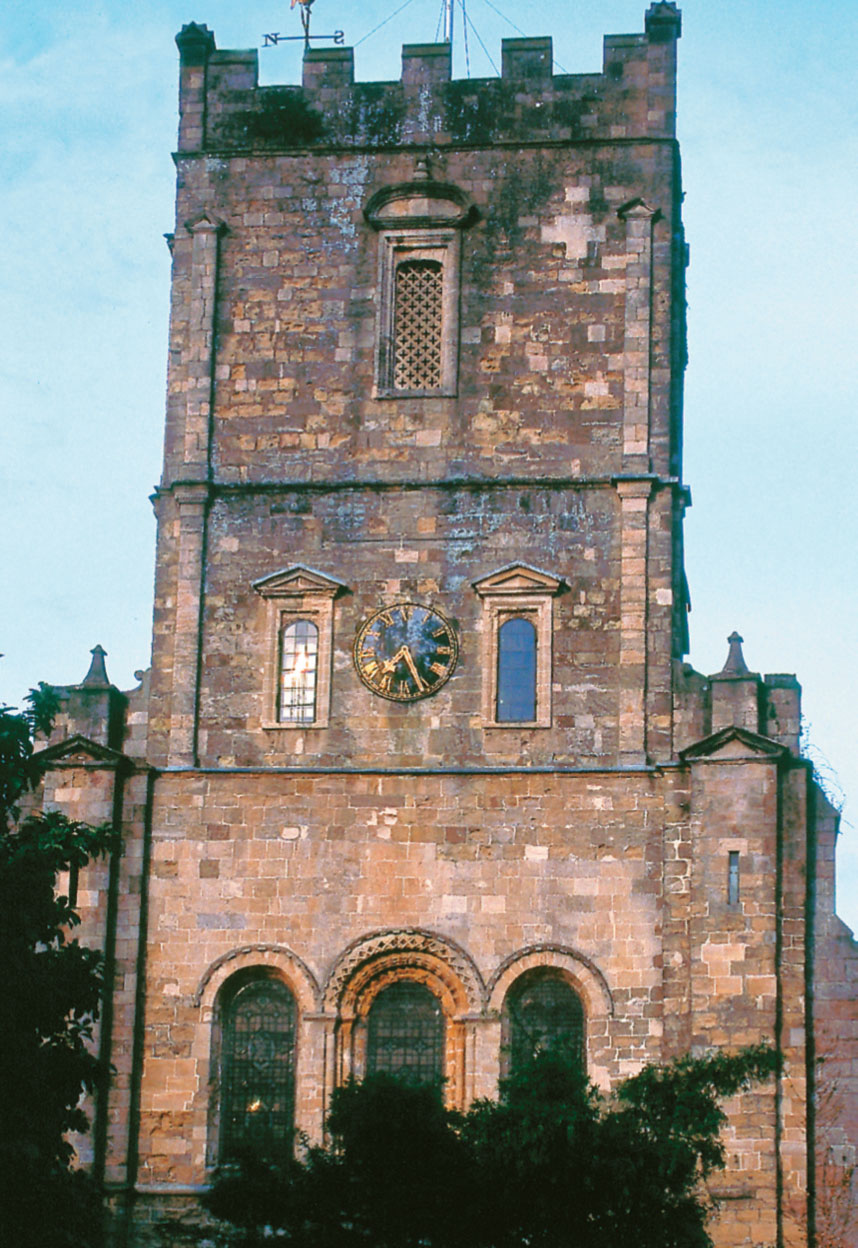 Sitting on a bluff above the river, Chepstow Castle looks across into England and the wooded hills of Gloucestershire.[/caption]


Sitting high atop the cliffs above the River Wye, Chepstow Castle unsurprisingly dominates the town and its skyline. The fortress was begun in 1069 by William FitzOsbern, one of William’s conquering knights, as a base from which to launch Norman subjugation of Wales. It was rebuilt and enlarged in the 1270s by Roger Bigod, 3rd Earl of Norfolk and a powerful figure in the court of Edward I—again in a campaign to pacify the Welsh. Bigod’s building included a medieval defensive wall enclosing the town, set in a loop in the River Wye. The wall was built across the neck of the promontory, 1,200 yards long, with seven circular towers and a gate into the town. The wall is still intact today for the greater part of its length, and Chepstow’s town council offices sit in the surviving gatehouse. 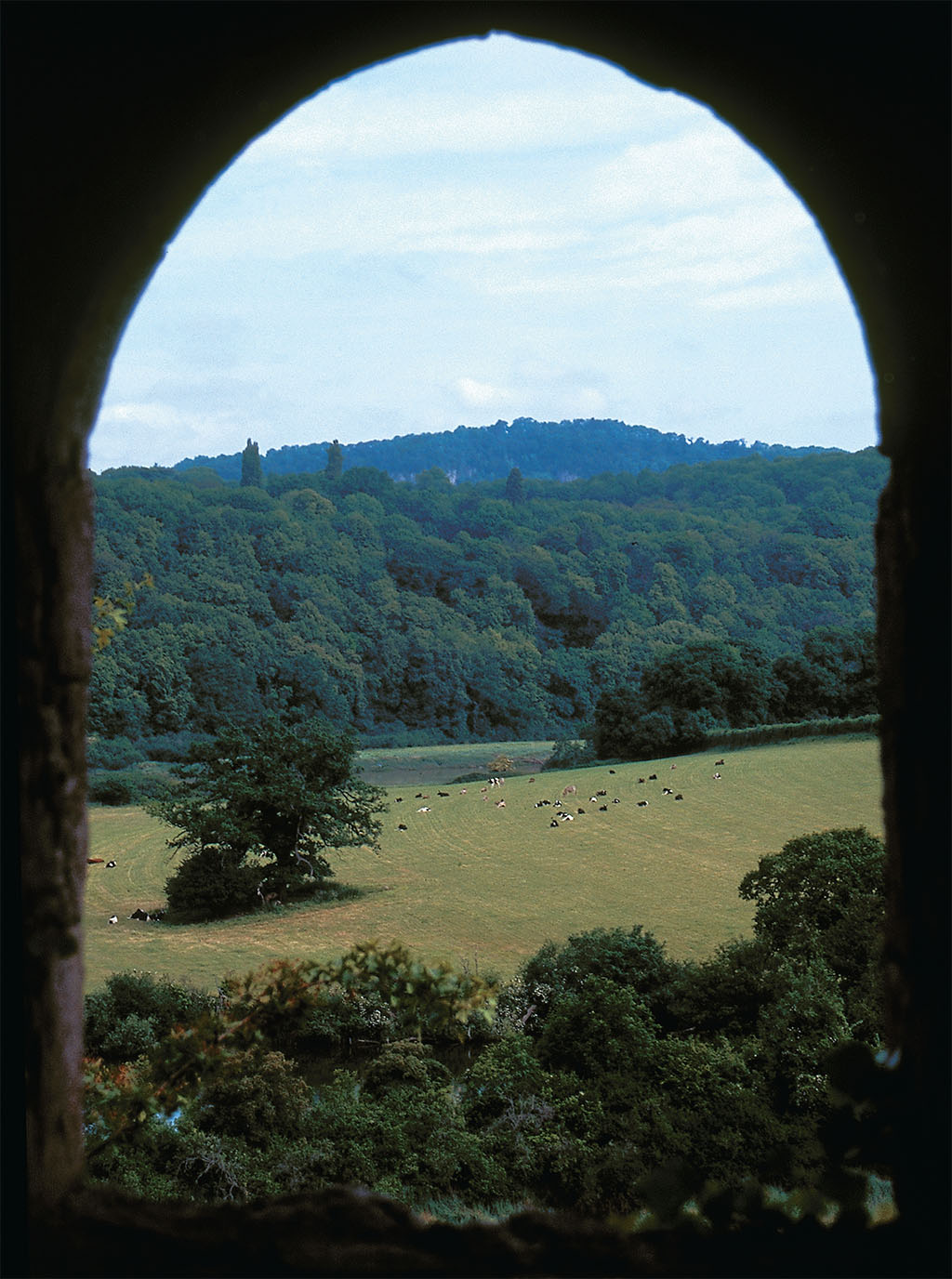 The parish church of St. Mary has cured the souls of Chepstow citizens since the 11th century.[/caption] 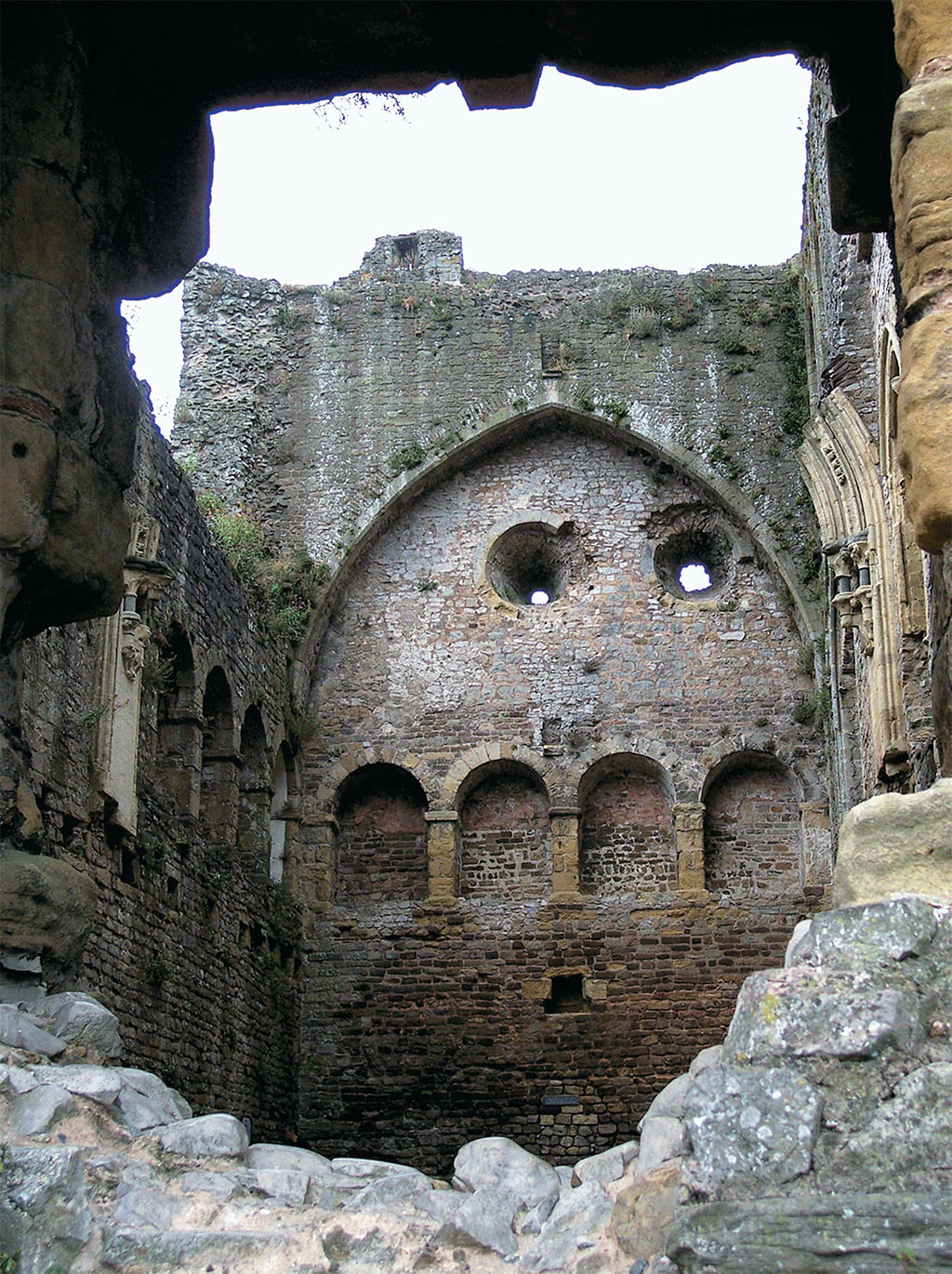 Today, the massive Great Hall of Chepstow Castle built by Roger Bigod in the 1270s stands defiantly open to the sky.[/caption]

The castle’s final active use was during the English Civil War when it was besieged in 1645 and again in 1648 by Parliamentary forces. It was garrisoned until 1690 and then dismantled and allowed to fall to ruin.
Nowadays, hoards of tourists flock to the castle, often buzzing in and out on day trips that wander up the Wye Valley or on to Bath or the Cotswolds. Throughout the spring, 300 schoolchildren a day visit Britain’s oldest castle on field trips.

‘One of Britain’s most scenic and dramatic rivers, the Wye threads its way past villages and market towns’

The lure of the Wye


The river itself draws more active visitors to Chepstow. One of Britain’s most scenic and dramatic rivers, the Wye rises in the Plynlimon Mountains to the east of Aberystwyth and threads its way to the Welsh–English border, past villages and market towns until it reaches the sea at the Severn estuary. The popular Wye Valley Walk begins at the Tourist Information Centre in the courtyard below the castle and follows the course of the meandering river for 136miles, from Chepstow threading north through Symonds Yat, Monmouth and on to Ross-on-Wye and Hereford. The walk enters the Welsh uplands at Hay-on-Wye (the famous Town of Books) and continues to Builth Wells and on toward the river’s source.
At Chepstow, the Wye has 40-foot tides—second highest in the world. From 1086 until the close of the Customs House in 1882, Chepstow was an active port, its wine trade and shipbuilding bringing prosperity to the town. Chartists were transported from Chepstow in 1840, and from the 13th century Wye salmonwas the prize of a thriving fishing industry. In 1786 the local vicar, the Rev. Edward Davies, penned a triumphal couplet:

A Chepstow’s salmon’s worth his weight in gold, Unlike the flabby fish in London sold.

As the story is elsewhere, overfishing has depleted the river’s stocks. Today there are two drift net boats commercially fishing the Severn estuary out of Chepstow. 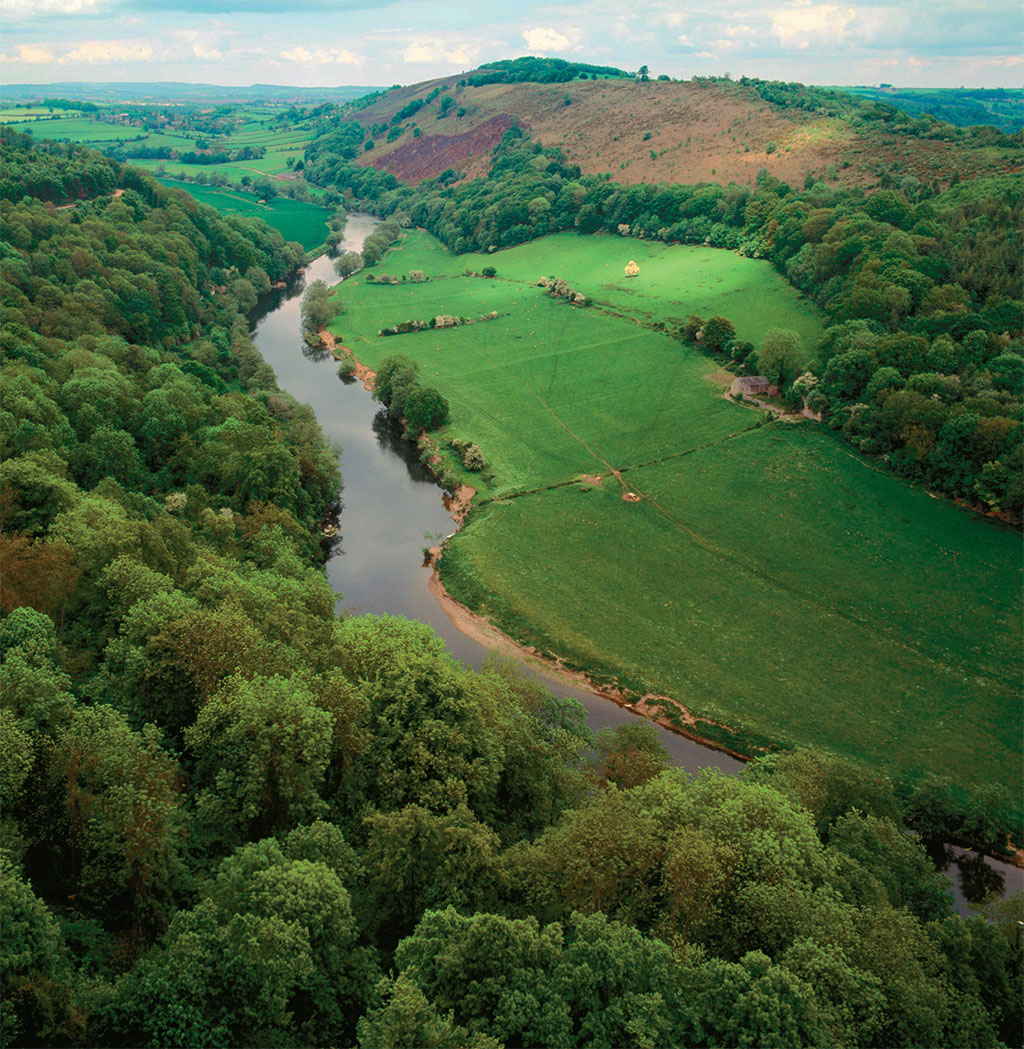 From Symonds Yat in the Wye Valley Walk, hikers gain unparalleled views over the fertile plains of the river valley.[/caption]

Along the once bustling waterfront below the castle, a riverfront walk still shows the scars of the town’s industrial past but offers great views of the castle, river and the beautiful wrought-iron Chepstow Bridge, built in 1816. Until the mammoth Severn Bridge was completed in 1966, this bridge remained the main road link between England and South Wales.
Periodically the town is invaded by another sort of visitor. On the edge of town sits Chepstow Race Course, and race meetings draw thousands who follow what is, after all, one of Britain’s most popular sports. It is hard to imagine a more idyllic setting for a grass race course.

Treasure in the forest


Hidden well out of sight behind the race course is one of Chepstow’s little known treasures, Pierce field House. Or rather, what remains of it. A forest track through canopies of beech and oak grove opens into a broad meadow half a mile or more across, once Pierce field Park. Here in the 1750s, Valentine Morris laid out one of the early impressive examples of the ‘sublime landscape’ that became the hallmark of 18th-century landscape architecture. Sheep by the hundreds graze in the undulating field, marked out with the jumps of a point-to-point course. The serpentine driveway leading toward the house is used now only by the shepherd. 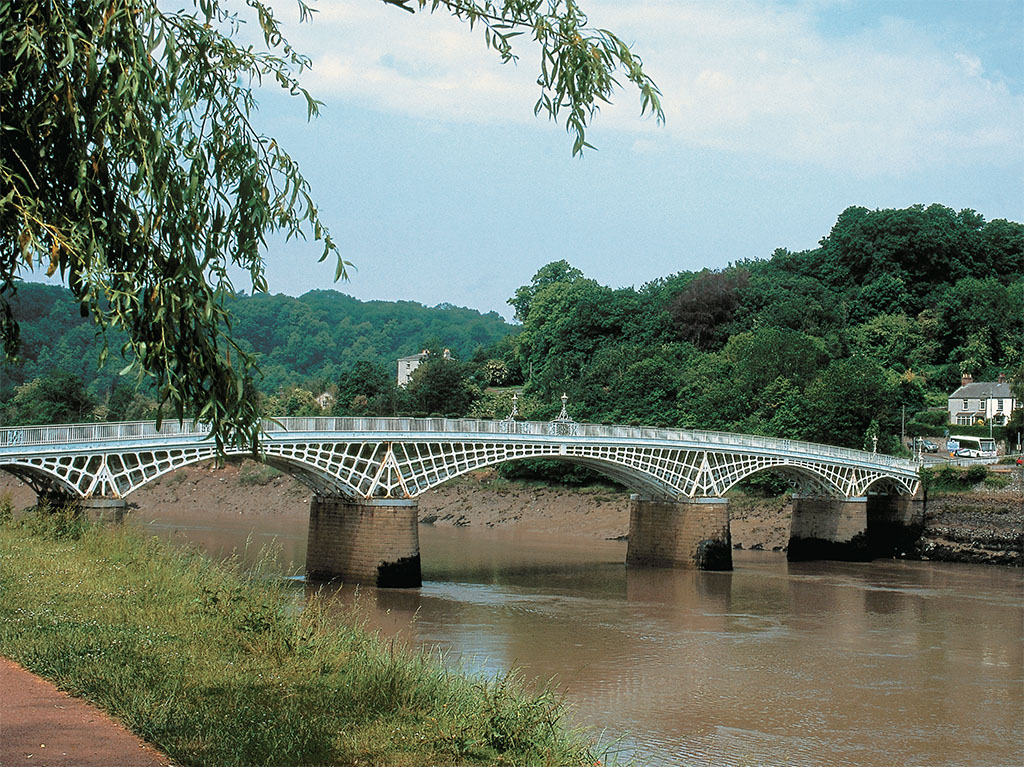 Until the mammoth Severn Bridge was completed in 1966, Chepstow Bridge, built in 1816, remained the main road link between England and South Wales.[/caption]

Across the park lies the crumbling facade of Pierce field House. The original Tudor mansion was rebuilt by Sir John Soane in the 1780s. In its heyday, Pierce field was a ‘must-see’ visit on the Wye tour, but like so many great English houses in the 20th century, it was abandoned because of the huge expense of maintenance and the confiscatory death duties imposed by successive Labour governments.
Now, the skeleton of the derelict house sits vine-covered and crumbling. Unoccupied since 1923, the house’s floors and roof are largely gone. Floor beams lie askew. The outbuildings are falling apart. The once vibrant and tended gardens have faded as well, choked with vines and shrub brush. Nature takes back her own. In this case, nature got a little help; American troops stationed nearby in World War II used the structure for target practice.


In many ways, Chepstow today is a typical market town. Come nightfall, the town center is quiet. Much of the old downtown looks like it has seen better days. Merchants complain that the supermarkets have driven trade off the High Street, and there are too many shop-fronts for lease. For serious shopping, folks travel to Newport or Bristol.
Within the old town wall, however, Beaufort Square has been rebuilt and revitalized. The Chepstow High Street area was regenerated in 2005, and it features ornately decorated curved stone walls engraved with relief sculpture and shards of Welsh poetry. There is no lack of old pubs with friendly regulars, and a range of restaurants abounds for visitors and locals alike.
An elegant townhouse that was the local hospital, from its use as a convalescent home for wounded soldiers during World War I until 1976, houses the Chepstow Museum, which unfolds the drama of local history in a charming, small-town way. The parish church of St.Mary is just around the corner. It, too, had its beginnings with William FitzOsbern and still stands to fulfill its mission after 900 years.
A few miles up the Wye Valley is the imposing ruin of Tintern Abbey, once among the richest foundations in Britain and now one of the most popular historic sites in Wales. It is too bad that so many people cross the Severn and pass by Chepstow to see the old abbey without taking a day or two to visit the walled border town.