Easy driving days in the Garden of England 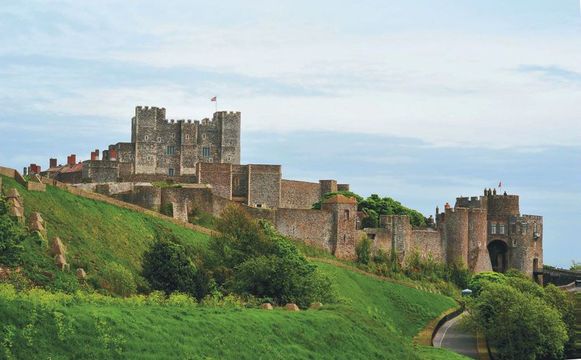 The largest castle in England, Dover Castle has guarded the narrow channel straits since the time of the Romans.

The fertile rolling countryside of Kent conjures up images of apple orchards and hop gardens. South of London and the Thames, east of the High Weald of Sussex, Kent has been the entry point of visitors and invaders from the Continent for many millenniums.

A few days of exploration of Kent combines a wealth of history with paradigm landscapes of green and pleasant England. Here is an itinerary of modest driving distances with a multitude of destination choices and a cornucopia of tantalizing photo opportunities.

Day 1 - On a Canterbury Pilgrimage

Follow the route from London taken by Chaucer’s 14th-century pilgrims. That would be the A2, whether you are driving southeast out of London or picking up the route off the M25 at Dartford from the airports or beyond.

The highlight stop along the way is Rochester and Chatham. This is Charles Dickens country—where he was a boy, where he returned as an adult, and where many of his beloved novels are set. Explore Rochester’s High Street, laden with Dickens associations (as well as Rochester Cathedral and Rochester Castle, with the most complete Norman keep in the country).

Chatham Dockyard is where Dickens’ father worked, and where many English ships-of-the-line were built. It’s a great visit.

The M2 is the motorway to Canterbury, but the old A2 follows the historic route Chaucer’s travelers would have known in the 1300s. The ancient market town of Faversham is worth a look around as well. Canterbury is a popular tourist city, well accustomed to pilgrims from around the world, with plenty of accommodation options across the budget spectrum. Scout ahead at www.canterbury.co.uk. 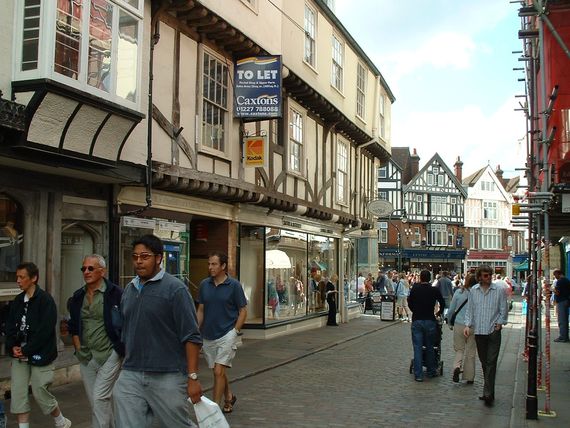 Canterbury is a popular tourist city.

Canterbury’s historic identity has been long embodied in Canterbury Cathedral, Mother Church of the Church of England, the seat of the Archbishop of Canterbury, and repository of centuries of history. Geoffrey Chaucer’s pilgrims came to Canterbury 700 years ago to visit the shrine of St. Thomas Becket—already a pilgrimage site for two centuries. The cobbled, pedestrian precincts around the Cathedral Close are a warren of fun shops, tourist attractions, and eateries. The nearby TIC, as always, is the place to get local maps, brochures, and whiff of local events.

Westgate is the best spot to view a panorama of the ancient city and get pictures of Canterbury Cathedral in its entirety. The city’s history is told at the Museum of Canterbury. Though the Romans were there first, much of that history begins at St. Augustine’s Abbey, established at Augustine’s arrival with Christianity in the 6th century. 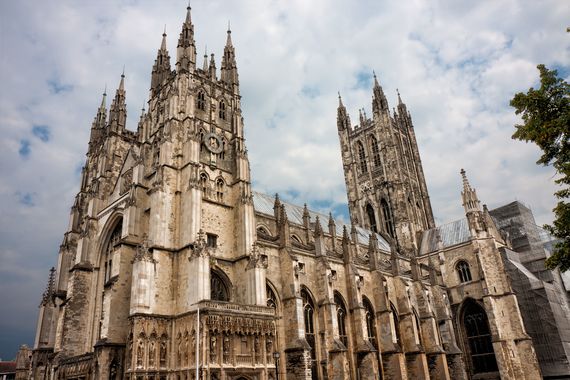 With a population of 55,000, Canterbury is still a manageable, user-friendly city. With four universities, it is also a student town. Between visitors and students, there is no shortage of great pubs, cafes, and restaurants to entertain and refresh contemporary pilgrims.

Day 3 - Isle of Thanet and the White Cliffs of Dover

Take an excursion today north to the Thames Estuary and the tip of Kent known as the Isle of Thanet. The A28 leads to Margate. Once a popular seaside resort, Margate has a faded patina and empty shops—though its resurrection is loudly touted. Follow on to the beaches of Broadstairs, where Charles Dickens made home and wrote at Bleak House.

Follow the A258 coast road south through Sandwich to Deal and Walmer; the Admiral of the Cinque Ports holds Walmer Castle. Soon enough you’ll find yourself driving along the top of the famed White Cliffs of Dover. 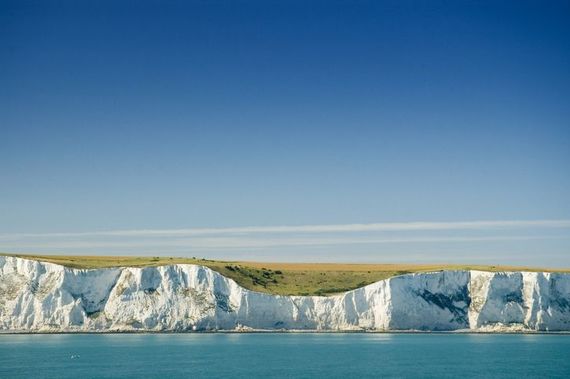 The White Cliffs of Dover.

Dover! Long the most important ferry port connecting Britain with the Continent, neither the prominence of air travel nor Eurostar have changed that. The highlight visit, however, is Dover Castle—largest in England. Seen as the key to England’s defense for centuries, the 12th-century fortress has evolved through the centuries, as Hellfire Corner and its secret World War II tunnels dramatically evidence.

The A2 delivers you in short order back for a final night in Canterbury.

Day 4 - Transit through the Garden

There’s a main road to Ashford, but let’s take to the countryside today, following the B2068 through the rich agricultural farmland, hop fields, and orchards of the Kent landscape. Those funny funnel-shaped roofs are roast houses, for the drying of hops.

This is Darling Buds of May country. Visit the pretty market town of Tenterden, and perhaps take a ride on the old steam train of the Kent and East Sussex Railway. A few miles west on the A262, Sissinghurst Castle Garden is among the most famous of England’s classic gardens.

The incredible creation of writer Vita Sackville-West is justly popular, now in the care of the National Trust.

Royal Tunbridge Wells makes a good base for exploring western Kent. The eponymous wells helped the town became fashionable as Bath faded on the social map. The beau monde gathered during the early 1800s at The Pantiles. Sample the water from the Chalybeate Spring that Regency visitors took as a cure for anything. The pretty promenade of shops and restaurants also houses the Tourist Information Centre.

Take a stroll and perhaps a morning coffee on The Pantiles, or head out of town to explore a wealth of nearby visits. A few miles north sits Ightham Mote, while just south of town Scotney Castle gardens are majestic any season of the year. To the west near Edenbridge, Winston Churchill’s home, Chartwell, conveys a wealth of history and personal glimpses of the man.

Finchcocks with its collection of musical instruments, Penshurst Place, delightful gardens at Grooms-bridge Place and Pashley Manor, and Hever Castle, home of Ann Boleyn: All sit just a few miles of Tunbridge Wells.

It’s an easy drive this morning back up to the M25, onto either airport or into London. Or head farther along the south coast into Sussex to call at Bodiam Castle; Bateman’s, home of Rudyard Kipling, and the 1066 Country of Battle and Hastings. There is always another great heritage visit around the next corner.