Six places to see on the west coast of Wales 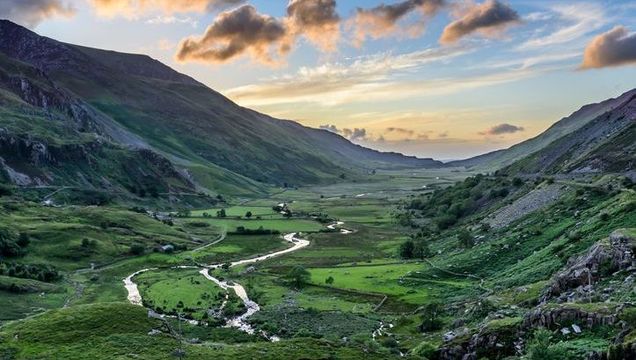 Pick any part of Britain's varied coastline and you’ll find fishing villages, harbor towns, and seaside holiday escapes. Many of these are well-trafficked paths indeed, but for a coastal adventure far less traveled, head to the far west coast of Wales.

This diverse road trip of manageable length reveals a sea-strapped heritage far removed from bright city lights and the manicured attractions of the common tourist circuits.

An abundance of castles, relics of the nation’s Celtic past, coastal panoramas and photo spots line the way. Take those couple of extra days if you can.

Day 1: Across the Severn to Cymru

From London, the airports or the M25, nothing could be easier than the drive to South Wales. Take the M4 west to the Severn Crossing and there it is. Croeso y Cymru – Welcome to Wales!

Chepstow makes a great first destination across the broad river border on the M48. Plan three hours with a stop on the motorway. Or take the scenic route, dropping down onto the A4 in Hungerford, through Marlborough and Avebury to Chippenham (do stop at Avebury Circle if you’ve not seen it).

Chepstow has two classic moderately-priced hotels in the town center: The Beaufort on the square and the Castle Hotel under the walls of 11th-century Chepstow Castle. The tourist information center in the castle car park will be happy to help with a full range of other lodging options.

In addition to one of the two oldest surviving stone castles in Britain, visit the local Chepstow Museum right across the street, and enjoy the arcades and alleys of the old town center. Tintern Abbey is just up the road, as well. 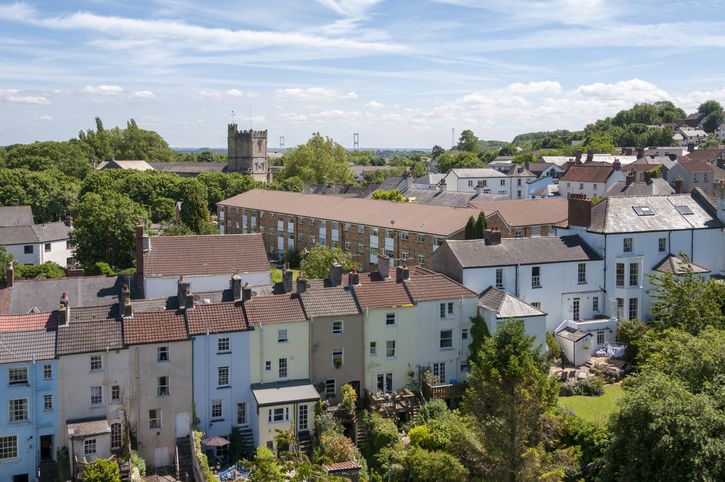 Continuing west this morning on the M4, it’s only a few minute’s drive to Caerleon, one of the most important sites in Roman Britain. Once the legionary fortress of Isca Augustus, Caerleon’s Roman amphitheater is among the world’s most complete, and the Roman barrack blocks are unique in Britain. The National Roman Legion Museum tells the whole story.

With the jagged coastline to the industrial south, continue West on the M4. Past Newport, Cardiff, and Swansea, the motorway ends into the A48 and Carmarthenshire. At St. Clears, you might divert just a few miles to Laugharne and its breathtaking estuary. Visit cliff-top Laugharne Castle, poet Dylan Thomas’ boathouse home, and perhaps take refreshment at Brown’s Hotel, where Thomas drank with local friends and fans that came from far and wide.

The southwestern peninsula of Wales, Pembrokeshire can be an overnight stop–or a great place to spend an extra day. Walking the 186-mile Pembrokeshire Coast Path along some of Britain’s prettiest coastline might take a little longer.

For a classic Welsh seaside resort and a tidy walled medieval town, head for an overnight in Tenby. Or continue on the A487 to St. David’s; with 1,800 residents, the village is the smallest city in Britain. Its ancient cathedral dedicated to Wales’ patron saint provides the city status. Do visit 12th-century St. David’s Cathedral by all means, and the ruins of the once-elegant medieval Bishops Palace. 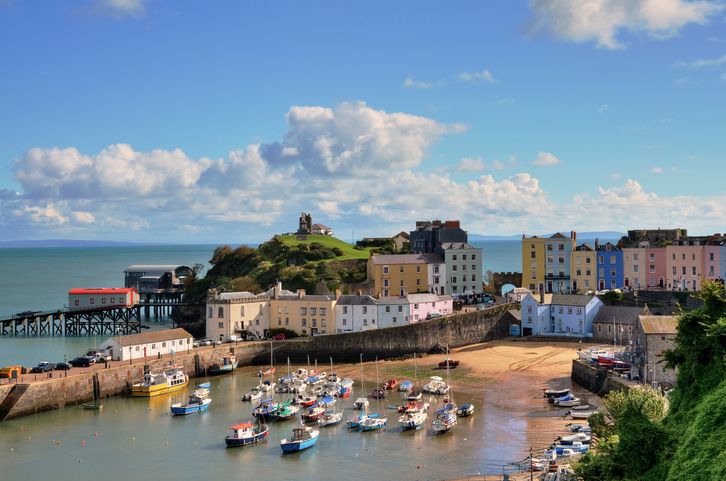 Picturesque view of boats in Tenby Harbour, with its clusters of colourful painted houses, and Castle Hill

Day 3: Along the West Coast to North Wales

From Tenby or St. David’s this morning route winds north to Fishguard, where travelers have caught the ferry to Ireland for generations. The A487 leads north along the coast to Snowdonia. Don’t expect to drive at main road speeds, however. The road is narrow, constantly winding and the coastal scenery too spectacular to ignore.

The convenient midway, midday destination is Aberystwyth. With 10,000 students, the University of Aberystwyth doubles the town’s population. Stretch your legs and take lunch on the popular seafront and pier and the adjacent pretty commercial streets.

North of Aberystwyth another 20 miles, at Machynlleth the landscape gets wilder as you enter Snowdonia National Park. A dozen miles north of Dolgellau the A487 veers west to follow the coast, while the A470 continues north over the slate mountains around Blaenau Ffestiniog. If time is pressing, follow this mountain route to Betws-y-Coed for the overnight and explore the Vale of Conwy.

Don’t expect to drive at main road speeds, however. The road is narrow, constantly winding, and the coastal scenery spectacular.

It’s only a few miles west to the harbor town of Porthmadog–in season a popular destination with an abundance of tourist services. Time permitting, do visit famous Portmeirion, the Italianate fantasy village created by architect Sir Clough Williams-Ellis. Or take a ride up to the slate quarries on the narrow-gauge, steam Ffestiniog Railway. 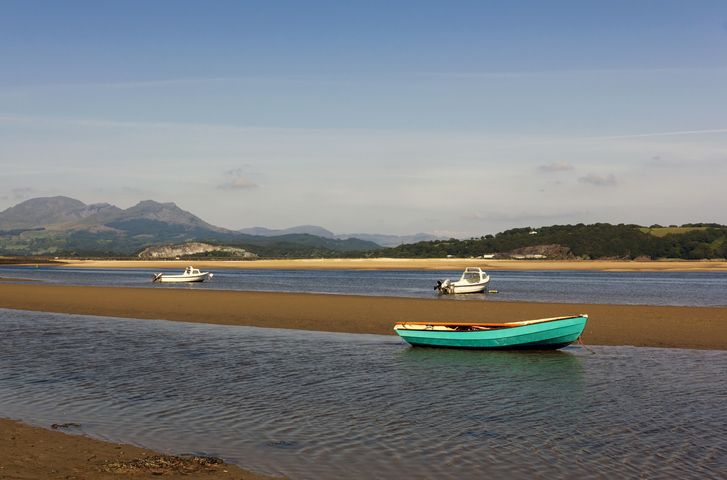 A day won't do it in Snowdonia, so you’ll inevitably make choices–or take another day in the neighborhood. Follow the A487 up to Caernarfon this morning, for a visit to the walled town and majestic Caernarfon Castle, built by Edward I and site of the investiture of Prince Charles as Prince of Wales.

Then, take the A4086 through to Llanberis and Mount Snowdon. Llanberis is the staging ground for excursions of any kind to the summit of the tallest mountain in England or Wales. You might catch the Snowdon Mountain Railroad to the top if you decide not to hike it. Through the Pass of Llanberis, continue west to Betwsy-Coed.

Stay in the popular mountain village and join visitors and locals at the Royal Oak’s bistro this evening, or carry on along the river to Conwy. 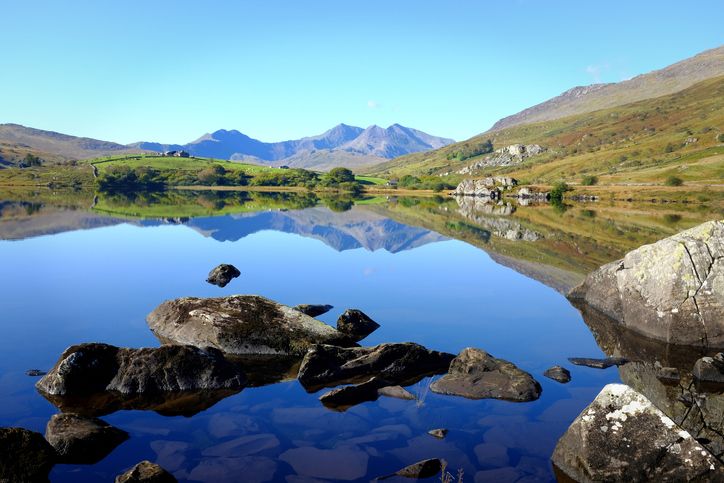 The view across Llynau Mymbyr to Snowdon on a beautiful still Autumn day.

Whether its spring or summer, the one visit to plan for in the Vale of Conwy is Bodnant Gardens. These spectacular National Trust gardens are considered the finest in Wales for a reason.

The walled town spreading out beneath Conwy Castle is a delight. Explore as well the small town center with its variegated architecture and the working quayside where the River Conwy opens into the Irish Sea. Pay a visit as well across the estuary to the popular seaside town of Llandudno, renowned as a holiday destination since the Victorians.

Stroll the pier nearly half a mile into Colwyn Bay. Or take the tram from Llandudno to the top of the Great Orme headland for incredible views over the coastline. Both Conwy and Llandudno are replete with accommodations from fine hotels to B&Bs. 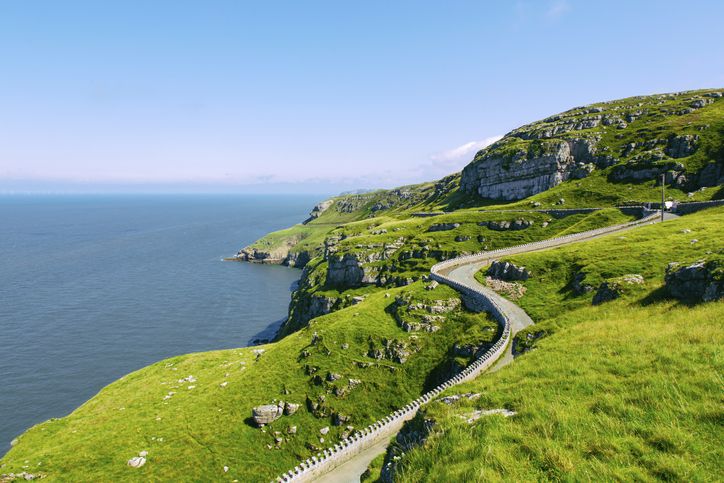 Day 6: Further Up and Further In

With another day in North Wales, you might take a drive along the coast to the Isle of Angelsey.

Cross the Menai Straits to visit the elegant mansion of Plas Newydd, seat of the Marquis of Anglesey, on the Straits’ banks. Nearby, visit picturesque Beaumaris Castle. Or head east on the A55 toward Cheshire. See a bit of historic Chester, surrender your rental car there and catch the train back to London. If your road trip continues, you might turn south to Shrewsbury and take the A49 along the Marches border and Offa’s Dyke.