Full English, a guide to a proper British fry-up 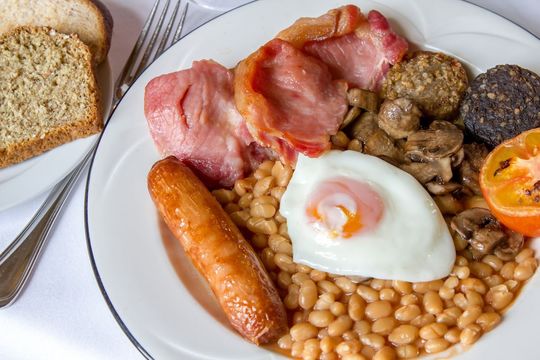 Breakfast: It's Britain's answer to soul food. The art of the proper fry up is still alive today and can be found in kitchens all over the United Kingdom.

Unlike the croissants and coffee of France, the traditional British breakfast is a big, hot, rib-sticking plateful of food. Bacon and eggs are only the cornerstone.

In either case, fruit or juice, and cereal come first; there must be steak sauce, ketchup, and pickle on the side; and no breakfast is complete without toast and rolls with marmalade and jam, and cup after cup of tea or coffee.

The history of the fry up

Rooted in the distant past, the British breakfast really blossomed on the tables of leisured people of the 19th century.

It took its unique, rich, high-protein form because the Victorians gloried in amplifying Britain’s basic breakfast fare with as much variety as possible.

Windows were tiny and candles expensive, so cooking was done in the daylight when possible. Meals in winter were, therefore, later than meals in summer. But whatever the season, breakfast featured convenient preserved foods or something from the night before.

For example, in the early 16th century, members of Henry VIII’s court had bread and a gallon of ale, while the Earl of Northumberland and his family had salted fish on fast days and meat on other days, plus bread and ale. Dinner, the main meal of the day, came in the early afternoon, so it could be eaten before nightfall.

During the 17th century, Britain became an increasingly commercial country, and by the 1780s the Industrial Revolution was in full swing. For many, a large early-afternoon meal interfered with the day’s work.

With bigger windows and better lighting reducing the dependence on daylight, dinner began to be served later and later. Jane Austen’s family ate it at 3:30 p.m. in the 1790s, but by 1806 they had pushed it to 5 p.m. Later in the 19th century, dinner rarely appeared before 7:30 p.m. As dinner wandered into the far reaches of the evening, breakfasts became larger to sustain people through the day. 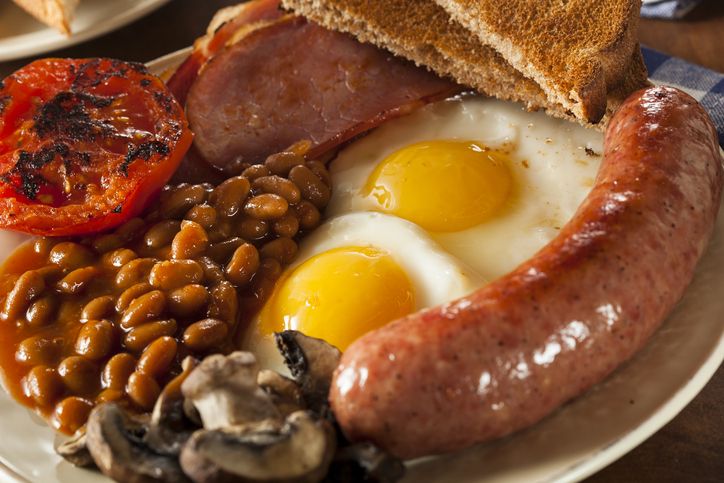 Bring in the bacon

Bacon had long been a breakfast staple because most people kept pigs, and curing the meat ensured a year-round supply. Slices—called “collops” and cut off the side of hanging bacon—kicked off the medieval day, and bacon has never lost its breakfast popularity.

Research on meals of the lowest-paid laborers in York in 1900 showed that they breakfasted on bacon and bread. Railway workers, earning more, varied bacon with sausage or an egg—other breakfast favorites.

The other long-established breakfast food was porridge made of oats or barley called llymri in Welsh, and flummery or washbrew in the north of England. The 17-century writer Gervase Markham explained, “Some eat it with honey, which is reputed the best sauce; some with wine, either sack, claret or white; some with strong beer or strong ale, and some with milk, as your ability, or the accommodations of the place will administer.”

Making bacon and eggs for one is easy, but anyone who has cooked them for a household knows that it’s a test of skill to get the golden-edged but tender bacon on the plates along with perfectly fried eggs.

Including other traditional components of the British breakfast only complicates matters. So how do cooks manage in a hotel such as The Grosvenor Hotel on Eastgate Street in Chester, where they prepare breakfast for around 150 people on an average day and often many more?

In the kitchen, where the temperature is already soaring through the 90s, Senior Sous-Chef Lewis Emerson says “It’s all down to timing.” He points to a cook arranging bacon, sausage and black pudding, mushroom and tomato in a metal dish and popping it under the broiler. When it’s partly cooked, he takes a couple of eggs from beside the stoves and fries them.

Everything reaches perfection at the same moment; the cook slides it onto a warmed plate, and a waiter whisks it into the guest. The next order includes baked beans, which go into a small saucepan. They are not on the menu, but as Lewis explains: “Ninety percent of the world’s baked beans are eaten in Britain. They’re very popular so we always have them for guests who ask for them.”

Porridge, too, is always on hand, and the hotel’s menu of hot breakfast is filled out with omelets, kippers, kedgeree and deviled kidneys with pancetta on toast. “Not so many people ask for kidneys nowadays, but some really like them,” said Emerson. Kedgeree—an Anglo-Indian mixture of rice, smoked haddock and hard-boiled eggs seasoned with curry—is another 19th-century favorite that still has aficionados. 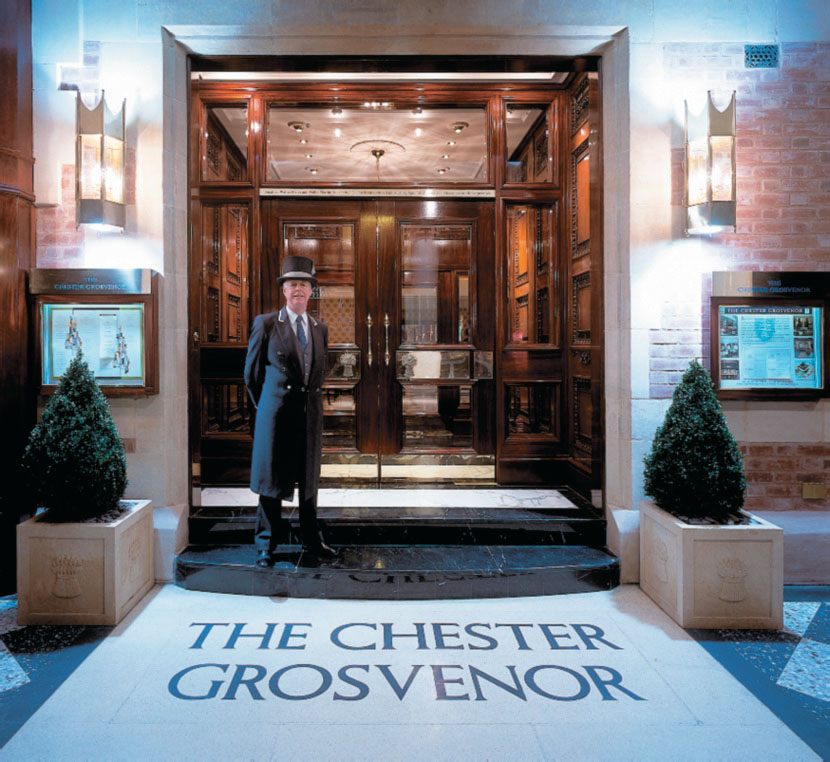 With all his breakfast experience, Emerson has some tips. “Don’t fry the bacon, sausage and black pudding.” (Broiling gets tenderer, less greasy results). “Don’t use eggs from the fridge. Our eggs are always by the stove where it’s very warm, so when we fry them we don’t get brown crisped edges.” On the other hand, he notes ruefully, “The heat in the kitchen means that getting an omelet into the dining room while it’s still baveuse—slightly runny in the middle—can be tricky.”

Most importantly, Emerson says: “It’s all about products. We use the best local products we can find. Eggs from free-range hens. Sausage specially made to the chef’s recipe from Gloucester Old Spot pork. And bacon sliced to ‘the Grosvenor cut’—not too thick, not too thin so it doesn’t curl too much.”

The black puddings come from Bury in Lancashire, a town renowned for this specialty. As for the croissants, muffins, rolls, and pastries that appear in handsome wooden bread baskets, they are made each morning in the Grosvenor’s own kitchens. “The pastry chef does them in batches throughout the morning, so whatever time guests come down to breakfast you always there are always really fresh rolls,” says Lewis.

To celebrate a perfect breakfast from the Grosvenor’s Michelin-starred kitchen, the menu’s final suggestion is “Why not start the day with some bubbles?” Guests can choose from Taittinger champagne or a Buck’s Fizz—champagne with orange juice.

Such work-intensive breakfasts were made possible by servants, who rose at dawn to start fires and prepare the fish, the cutlets, the rissoles, the sauces and all the fried things that kept company with the eggs and bacon and sausages.

Today, the average British household has the traditional breakfast at the weekend and on vacation. Mostly, people start their day much as Americans do: with toast or a bowl of oatmeal or a cereal such as cornflakes—invented by the American Dr. J.H. Kellogg as a vegetarian alternative to meat-based breakfasts.

Baked beans are another American contribution to today’s British breakfast. They derive from New England pork and beans. In 1886, Fortnum and Mason began stocking Heinz canned beans as an exotic delicacy. Pork disappeared from the tomato-sauced British beans when meat was rationed during the Second World, and beans on toast became a meat substitute at lunch or supper.

The link with toast may be what got them onto the breakfast plate, where they are reunited with pork in the form of bacon or sausage. Today, baked beans are menu staples in hotels, guest houses and the many cafes that specialize in all-day breakfasts. 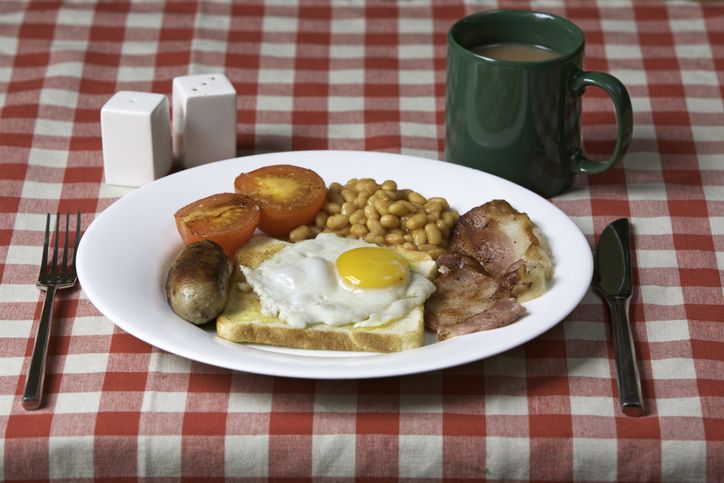 Travelers will spot regional additions to the basic breakfast. The Ulster Fry of Northern Ireland always has potato cakes and white puddings. The “full English” will have Cumberland sausage in the Lake District, Leicestershire or Lincolnshire sausage in the Midlands, and Wiltshire bacon in the southwest.

In South Wales, the bacon comes with laverbread, which is stewed kelp. Kippers appear in the Isle of Man and the Northeast, while Scottish menus often include Arbroath smokies and local rolls such as baps and rowies.

And everywhere, for those who don’t have the time for a complete traditional repast, there’s the bacon sandwich, called a bacon butty in the north and a bacon sarnie in the south. Several slices of back bacon are simply stuffed between slices of white bread or a soft roll. Some people like to add ketchup or steak sauce.

Some butter the bread; purists prefer to dip it into the bacon fat before wolfing it down while it’s still hot. This is British soul food, just the stuff to kick start the day, as Prince Harry knew when he ordered bacon sandwiches for the revelers who made it through to the morning after the wedding of the Duke and Duchess of Cambridge.