From treacle sponge to jam roly-poly, puddings are an integral part of the traditional Great British menu, appearing at humble bistros and Michelin-starred restaurants alike.

The word “pudding” is probably derived from the French boudin, meaning sausage, and the first puddings were mixtures of suet, currants, and oatmeal. Later on, cooks wrapped their puddings in cloths or muslins before boiling them, and later still came pudding basins—dome-shaped bowls that were useful for both mixing the ingredients and as a container for cooking the dish. Although Americans tend to stick to dessert to describe the sweet course of a meal, in the UK you might find it referred to as dessert, pudding, a sweet, or “afters.”

According to food historian and lecturer Dr. Annie Gray, during the 18th century, the word dessert had a specific meaning. “Meals would consist of a first course—usually fish—then the main course of roasted game or meat. Sweet puddings would also come to the table at this point, along with the meat. Dessert was eaten as a separate course afterward, and always consisted of nuts, fruit, and ice cream.”

The words “sweet” and “afters” were used more in rural locations, where the meal would normally consist either of one course only, or with a savory pudding served before the main course to take the edge off eager appetites before the meat course.

Like many other British traditions, puddings fit into a class structure. Heavy sponge or steamed puddings were often served to round off a working-class meal, or to children for nursery tea. The more complicated and expensive the ingredients of a dish, the more likely it was to make an appearance on upper-class dining tables, while the recipes in the famous Mrs. Beeton’s Book of Household Management, first published in 1861, were aimed at a middle-class audience. As pudding was very much an English phenomenon, though, hostesses would make a point of serving one as a mark of patriotism. 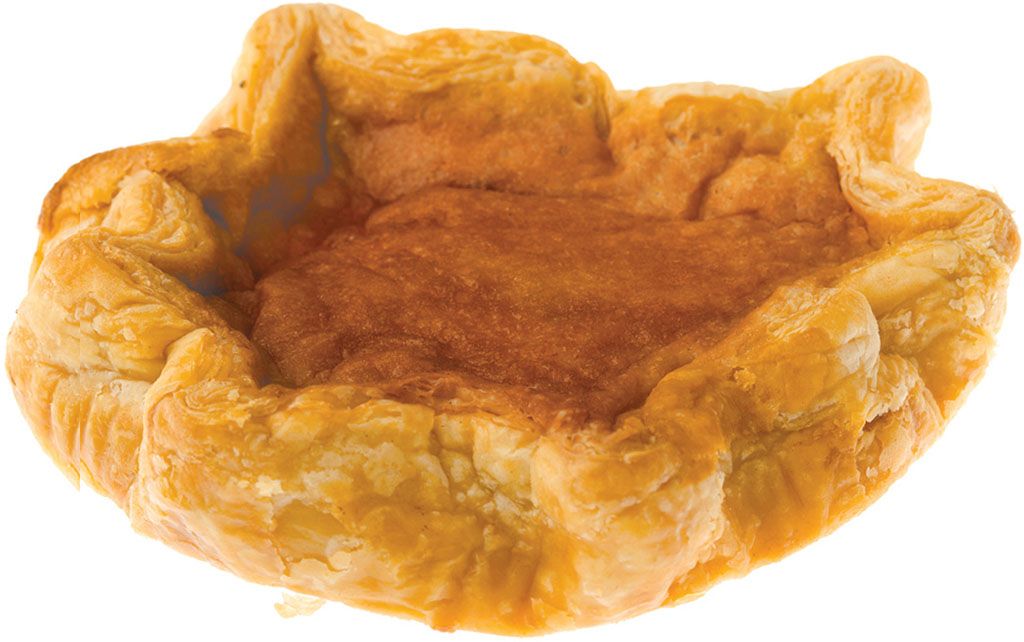 The original recipe comes from the town of Bakewell in Derbyshire, and, like all the best success stories, is believed to have been created by accident. Legend has it that in the 1800s, a confused cook took an order for strawberry tart, but spread the jam over the pastry and added a mixture including ground almonds, eggs, butter, and sugar. The famous Bakewell pudding was born.

According to Jemma Beagrie, manager of The Old Original Bakewell Pudding Shop, who still uses the original recipe, the dish is as popular as ever: “At peak times like August, we make in the region of 10,000 puddings a month, as well as shipping overseas. Our traditional recipe consists of an oval of puff pastry, spread with strawberry jam, then covered with the batter and baked to a golden finish. We recommend it’s served warm.” 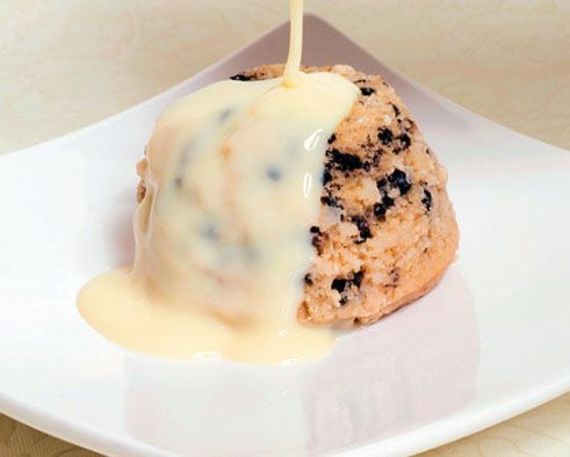 Spotted Dick (and every English pudding) goes well with custard!

This steamed sponge pudding is a relative newcomer under its current name, although puddings of this type have been eaten for centuries. According to the Oxford English Dictionary, “dick” was a 19th-century colloquial term meaning pudding, and the spotted part of the name refers to the visual effect of the dried fruit in the recipe. It first made an appearance in print under that name in the mid-19th century and was traditionally cooked in a long cylinder, although modern versions are more likely to be dome-shaped.

Richard Boyd, who worked for many years as chef to the fiercely traditional Guild Halls in London, and also at the famous Savoy hotel, remembers the pudding being so popular that they made up to 400 portions at a time, cooking them in long cylindrical “pudding sleeves” before cutting them into slices. His traditional recipe used beef suet, which gave a heavy, rich texture and taste, although vegetable shortening is now more commonly used for health reasons. 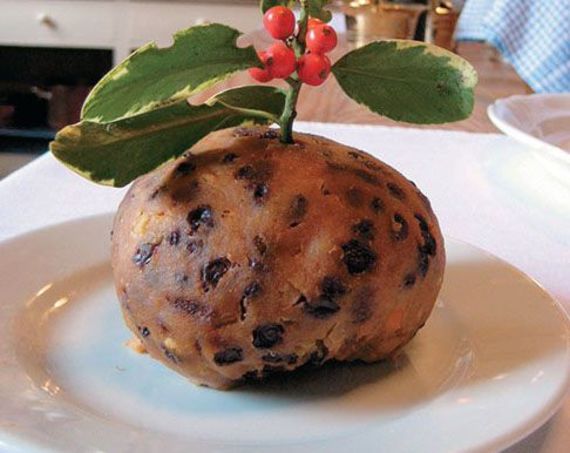 A Christmas pudding always bears a sprig of holly for a festive garnish.

Probably the best known of all British puddings, the Christmas pudding can trace its origins back to the Middle Ages. It has been through many incarnations over the years, ending up as a rich, spiced, steamed, or boiled fruit pudding. In the 1640s, the Puritans under Oliver Cromwell banned its consumption, condemning it as “unfit for God-fearing people” and a “lewd custom.” Fortunately, it was allowed to make a comeback when the Puritans lost power in 1660, and it has been a feature of Christmas ever since.

Traditionally, households made their puddings about five weeks before Christmas, on a day which became known as “Stir-up Sunday,” each family member taking turns stirring the mixture for luck. Other customs include the Victorian practice of adding “pudding charms” to the uncooked mixture—small silver tokens in the shape of anchors or thimbles. The traditional sprig of holly used to garnish the pudding represents Christ’s crown of thorns. 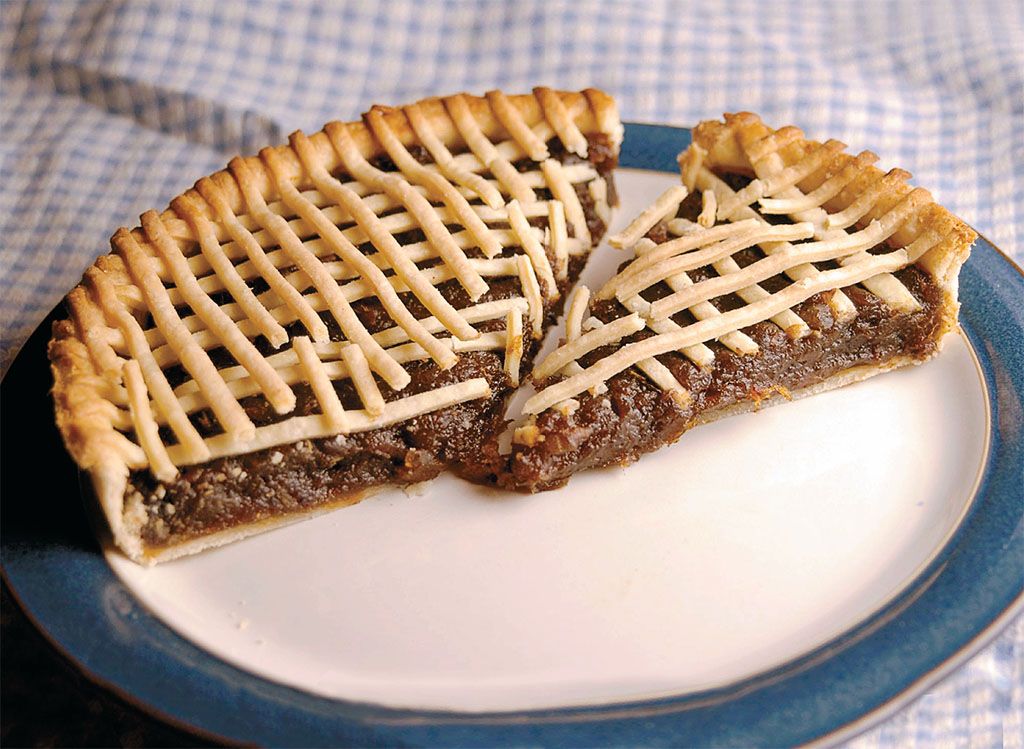 Cumberland Rum Nicky gets its kick from rum that used to be traditional cargo coming into the port of Whitehaven.

This oddly-named pudding is from the north of England, the area now called Cumbria. The pudding itself is a variety of tarts, consisting of a pastry case filled with dried dates, preserved ginger, sugar, butter, and rum. In the late 18th century, the Cumbrian harbor of Whitehaven was the second-largest port in the country, handling transatlantic cargoes of rum, spices, and sugar, which were then used in many traditional local recipes. According to Cumbrian food writer and photographer Tess Baxter, the name of the pudding is believed to originate from the nicks or slots cut into the top of the pastry, which in the larger versions has developed into a latticed pastry top.

“It’s a pudding that is still popular today,” said Baxter. “You can serve it with cream, but personally I like it plain and just warm from the oven.”

Bread and butter pudding, a stalwart of British pub menus everywhere, has a long history. Eliza Acton, who wrote one of the first cookery books aimed at private cooks rather than professional chefs, included a recipe in 1845. The basic dish consists of buttered, sliced bread, sprinkled with sugar, dried fruit, and nutmeg, and soaked with custard made with eggs and milk or cream.

The prepared dish is then baked until risen and golden and served warm. Modern variations on the original version include using croissants or brioche, spreading the bread with marmalade or sprinkling it with brandy, or adding candied lemon or orange peel.

This is a dish best made with bread that’s slightly stale, and it’s a popular way of using up leftovers. It is important to make it a little while in advance before baking it, so that the bread soaks up the custard sauce.

Cut the crusts off the bread, and butter each slice liberally, before cutting it into four triangles.

Arrange the triangles in layers in the dish, butter side up, scatter dried fruit between each layer.

Crack the eggs into a measuring jug, add the milk and whisk until thoroughly combined.

Sprinkle the lemon rind, sugar and nutmeg over the bread, and pour the custard over the dish.

Leave to stand for at least an hour before baking at 375F for 25-30 minutes until well risen and golden.