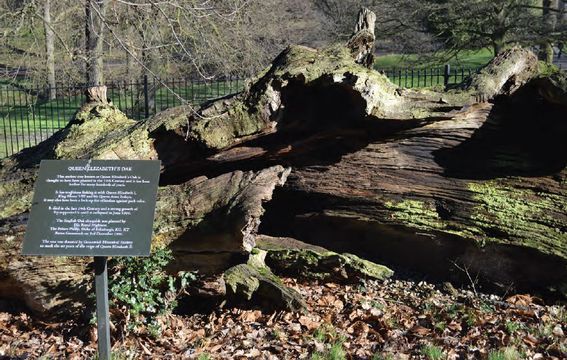 Historic Trees We Know and Love


Once upon a time in the days of yore, the forests of Britain were vast, liminal realms where kings would sport, peasants would forage and outlaws would hide. The romance of the greenwood lies deep in the British soul. Though warships and housing, enclosure and progress have eroded once-dense woodland, trees remain part of our shared story. Some individual specimens have even taken center stage, been given names and venerated over the centuries. Unsurprisingly the mighty oak dominates the tales, but many species, not least the largely lost English elm and the mysterious, ancient yew, all have their parts to play.


SHERWOOD FOREST, forever associated with the legendary Robin Hood, is a shadow of its medieval size, but still boasts 900 veteran oak trees. If the people’s outlaw ever existed, he might well have known the 800-year-old Major Oak. Once called the Cockpen Tree for the cock fighting held under its branches, the 92-foot giant, with a girth of 33 feet, derives its current name from a description by a Major Hayman-Rooke in 1790.
Robin Hood is, of course, the stuff of legend. Bad King John is not; the ruins of his palace have been recently excavated and his forest, once so fiercely patrolled by the Sheriff of Nottingham, is now enjoyed by merry men, women and children all. 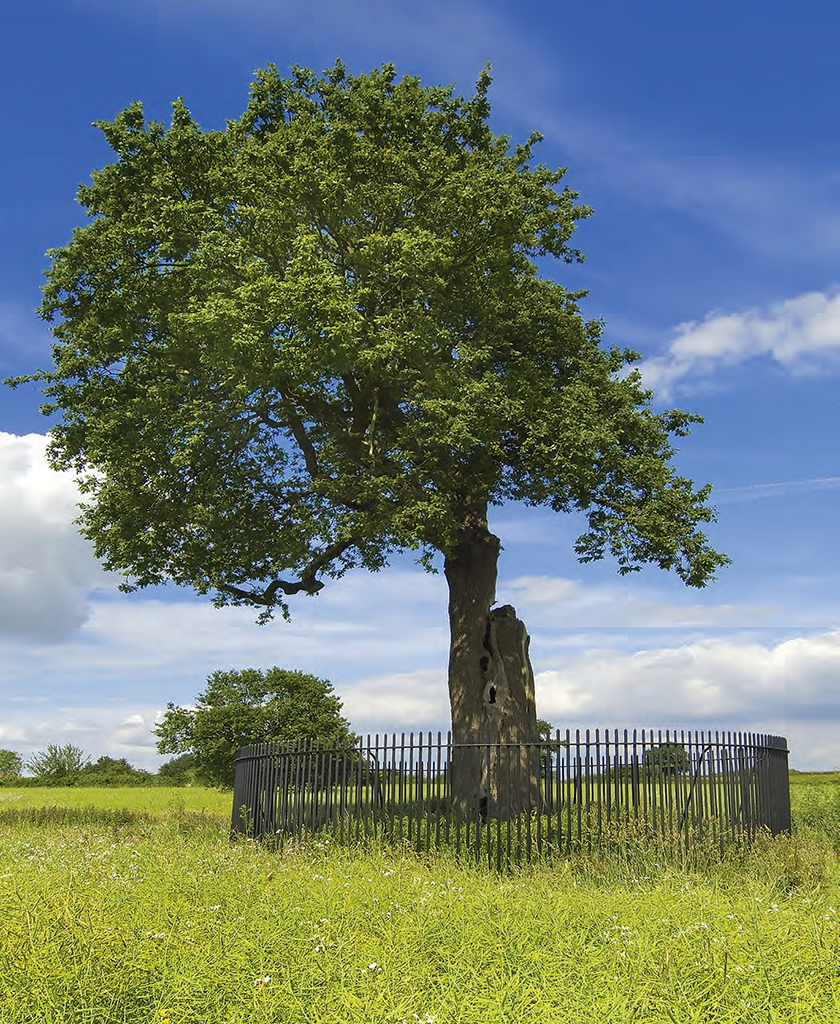 Perhaps the most famous tree in England, the Boscobel Oak sheltered a young King Charles II for a night while fleeing the 1651 Battle of Worcester—the last battle of the English Civil War.[/caption]


THE STORY of the Boscobel Oak is one of the most romantic in British history. A young King Charles II, on the run from Oliver Cromwell’s roundheads, spent a nervous night in an oak tree before seeking refuge in a local manor house. With supreme irony, his second hiding place, inside the house, was a priest hole, created to conceal Roman Catholic clergy from persecution by the Crown.
Now owned by English Heritage, Boscobel House, its priest hole and a descendent of the oak tree are all open for visitors to view. The incident itself is remembered in every British pub named the Royal Oak.


DUTCH ELM DISEASE is not a new horror. Timbers on the Mary Rose bear traces of its ravages. In the 1960s, however, the British landscape was changed forever as millions of English elms showed no resistance whatsoever to a particularly nasty strain of the horticultural plague. Among a handful of specimens saved, the majestic, 400-year-old Preston Twins in Brighton live under strict quarantine to ensure their survival, not least because they are home to one of the last colonies of elm-dependent White-letter Hairstreak butterflies.


IN 1834, in the Dorset village of Tolpuddle, a group of agricultural laborers met under a veteran sycamore to form a Friendly Society. Worn down with poverty wages and exploitation, they aimed to bargain for better working conditions. Landowners across the country were horrified at the implications of what was effectively the first trade union. They became even more worried at spiraling outbreaks of dissent across the country. The “Tolpuddle Six” were arrested, charged under the Mutiny Act and transported to Australia.
The severity of the punishment outraged the British public. Newspapers carried engravings of the men sitting under the tree, and an 800,000-signature petition soon threatened to be more embarrassing to the government than the original crime. The six were pardoned. The tree, now more than 300 years old, still stands in the village, regularly pollarded so it may see another few centuries. 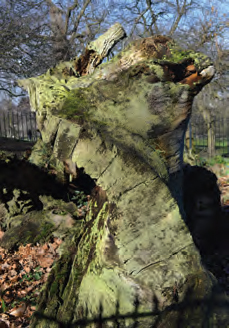 
QUEEN ELIZABETH’S OAK was already ancient when her father, Henry VIII, is alleged to have flirted with Anne Boleyn under its branches. Elizabeth herself is said to have taken refreshment in the tree’s capacious shadow. It enjoyed a checkered history thereafter. As its core died, a door and window were added to the resulting hollow and it was used as a lockup for minor miscreants. Victorians added a seat around the bottom, but by this time the oak had died. Incredibly, dense ivy kept the tree upright and green for the next 150 years, brought down only by a storm in 1991. The tree was so loved, however, that it has been retained, complete with railings and a plaque, while next to it a sapling was planted by the Duke of Edinburgh in 1992.
Greenwich Park


THERE CAN’T BE A TREE in Cornwall that doesn’t have magical properties, but to the Darley Oak is attributed more than its fair share of healing powers. Pregnant women would carry one of its acorns to secure a trouble-free birth, and it was said that anyone who passed through the tree’s hollow and then circled its 36-foot girth would be granted wishes.
Despite surviving Bodmin Moor’s punishing terrain for 900 years, the Darley Oak proved vulnerable to the great storm of 1987. Now approximately half its former circumference, it’s still a fine specimen, celebrated as one of 50 great trees lauded at Queen Elizabeth II’s Golden Jubilee.
Darley Ford, Launceston


AN ABIDING BRITISH LEGEND holds that Joseph of Arimathea saw out his days in England. He is said to have planted his staff in the ground on Wearyall Hill. The next morning it had taken root and grown into a strange tree that flowered, not once in spring like regular hawthorns, but a second time, on Christmas Day—a horticultural miracle.
The original Holy Thorn was hacked down by Oliver Cromwell’s troops in the 17th century, but canny locals had already secretly taken cuttings, and several of these can still be seen in gardens around town today. Each Christmas, Her Majesty the Queen is presented with a sprig of Glastonbury thorn blossom for her festive table.


KING JAMES I had a cunning plan to avoid having to buy silk from the hated French: his own silk industry. He imported 10,000 mulberry trees, which he encouraged his courtiers to purchase for their country estates.
Famously, however, King James had failed to do his homework. Instead of the silkworm’s favorite food, the white mulberry, he’d bought the black variety, which the grubs won’t touch. The legacy of Britain’s failed silk business is hundreds of elderly mulberry bushes growing all over Britain. The Great Mulberry in the grounds of Charlton House in South East London claims to be the oldest survivor of James’s experiment at 410 years, probably as old as the house itself. 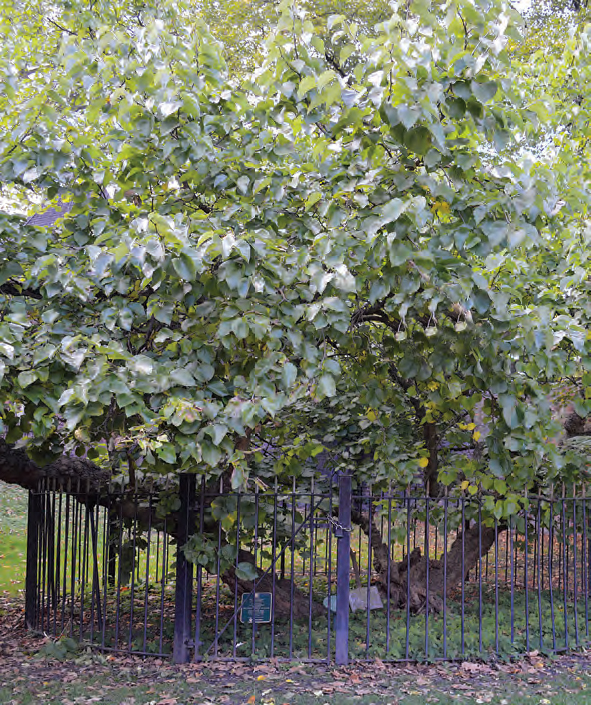 The Great Mulberry at Charlton House.[/caption]


AS MYTHS GO, the tale attached to Isaac Newton’s discovery of gravity via an apple hitting his head is right up there with Archimedes’s bathtime eureka moment. Whether or not falling fruit actually sparked Newton’s theory, the tree itself certainly exists in the orchard at Woolsthorpe Manor. It was blown over by a storm in 1820, but the roots remained strong and it resprouted. In case you’re looking for further scientific inspiration, the variety is Flower of Kent and it’s possible to buy grafted cuttings with direct ancestry to the original tree.


A CHILLING TALE surrounds the massive, fragmented yew in the churchyard of St. Digain’s. Legend holds the tree, aged between 3,000 and 5,000 years old, houses an ancient spirit. Each All Hallow’s Eve, the Angelystor announces in stentorian tones the names of those that will die the following year. Legend holds that a village tailor, Siôn ap Robert, pooh-poohed the idea and went to the church one Halloween night to prove the story wrong. The first name he heard was his own—and yes, of course he died within the year. In the churchyard, two standing stones predate the current building, proving human activity long before the Christianization of Wales.
Llangernyw, Conwy


IT’S IMPOSSIBLE to exactly date a yew tree, as they become hollow with age, preventing accurate ring or carbon dating. Several venerable yews claim to be the oldest in the country and many are considerably older than the churches whose yards host them. The early Christian church carefully obliterated many pagan sites by building on them; an added bonus was that the yews so venerated by the Celts also served as a potent symbol of the Resurrection.
The ancient yew in the churchyard at Fortingall, therefore, may be the oldest living thing in Europe. Experts put it at anything between 4,000 and 9,000 years old. Fifty-six feet in circumference, it was almost certainly the heart of pagan worship at some point in its long life. The great tree is in good health despite being raided for souvenirs by locals in less heritage-friendly centuries.


Macbeth shall never vanquish’d be until
Great Birnam Wood to high Dunsinane Hill
Shall come against him.
Macbeth, Act Four, Scene 1
SOME BELIEVE THAT, in 1599, William Shakespeare was among a troupe of actors sent to Scotland by Queen Elizabeth I to entertain King James VI. True or not, while on tour, the players visited Birnam Wood, later immortalized as the instrument of Macbeth’s doom in the Bard’s “Scottish Play.” The English army fulfils the witches’ seemingly impossible prophesy that a forest could walk by using branches from the wood to shield their approach. The medieval Birnham Oak, alongside the slightly younger but equally gnarled Birnham Sycamore, are thought to be the last survivors of the great forest from Shakespeare’s day.