‘Give Her a Haggis’: A history of Burns Night in Scotland 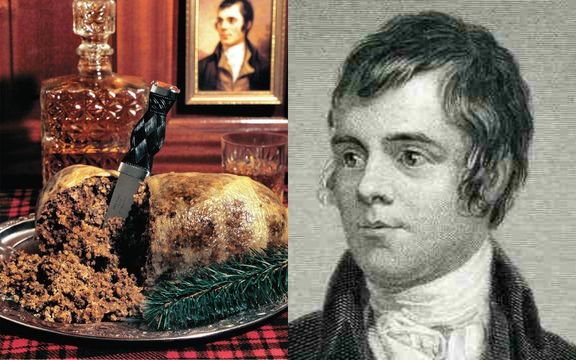 A toast to Robert Burns on Burns Night.

It’s an evening as convivial as the man it honors. Every year on January 25, people across the world gather for a Burns Supper on Burns Night, which commemorates, on the date of his birth, Robert Burns, his poetry, and his beloved Scotland.

The first recorded celebration of Robert Burns’ life occurred in July 1801, on the fifth anniversary of his death. Nine of his friends remembered him in a ceremony that included haggis and a speech. More such events followed in subsequent years.

In 1899 the Burns Howff Club of Dumfries, Scotland, held the first of what it called its Anniversary Dinner. Like most meetings of the club, it took place at the Globe Inn, Burns’ favorite pub during the five years the poet and his family lived in Dumfries. Burns loved to drink there, talk with his friends and enjoy the charms of the landlord’s niece, Anna Park. He called the Globe his howff, or haunt.

It wouldn't be Burns without of some of Robbie's famous poetry now would it?😉

Here @highlanderandy gives us a brief introduction to how we celebrate Burns Night here in Scotland and then reads us some of 'Address to a Haggis'.#ScotlandIsNow #BurnsNight pic.twitter.com/K6qPHCMu4Y

Today the Burns Howff Club still meets regularly at the Globe and preserves the room where Burns slept (often with “Anna of the golden locks”). Still open for business, another room at the inn serves as a pub and retains its 18th-century paneling and displays many relics from Burns’ life.

The Robert Burns World Federation was formed in 1885. Murdo Morrison, an honorary president of the federation, says that an estimated 12,000 to 15,000 Burns Suppers are held worldwide every year. “A well-organized Burns Supper,” Morrison explains, “is in a class of its own in terms of entertainment and information about the works of the bard and provides a platform for excellent speakers and good entertainers.”

They serve as an annual reminder, he says, of the love and respect people feel for the poet and his works. The general format of the dinners is fixed, though groups often elaborate or simplify the program as they choose. Suppers begin with bagpipe music. Pipes may set the scene or lead in special guests as they process to the high table. The chairman of the supper welcomes everyone present, and Burns’ Selkirk Grace is recited: "Some hae meat and canna eat, and some wad eat that want it, but we hae meat and we can eat, and sae the Lord be thankit."

A first course may be served, eaten and cleared. Then all rise as the star of the evening, the haggis, is carried in, to the sound of the pipes, on a silver platter. Everyone claps in time to the music as the main dish comes to the head table. The chef may follow it, along with whoever has been chosen to address the haggis, if the chairman will not.

Sometimes a third person processes too, bearing a tray of “tots” of whisky for all to toast the haggis. The chair or a deputy recites Burns’ “Address to a Haggis,” which begins: “Fair fa’ your honest, sonsie face, Great cheftain o’ the puddin’race!” When the presenter comes to the line, “An cut you up wi ready slight,” he draws his knife in a grand flourish to slice the dish lengthwise. (A word of caution: It’s wise to prick the skin of the haggis before this moment to relieve internal pressure. Otherwise, guests may be scalded by its exploding contents!) As the recital comes to the poem’s final lines—“But if ye wish her gratefu’ prayer/Gie her a haggis!”—the speaker lifts the dish high and everyone shouts, “Give her a haggis!”

The presenter asks the audience to toast the haggis, usually with whisky, and everyone enthusiastically complies. As the piper plays and the audience claps in time, the haggis is proudly carried out of the room to be sliced for eating. 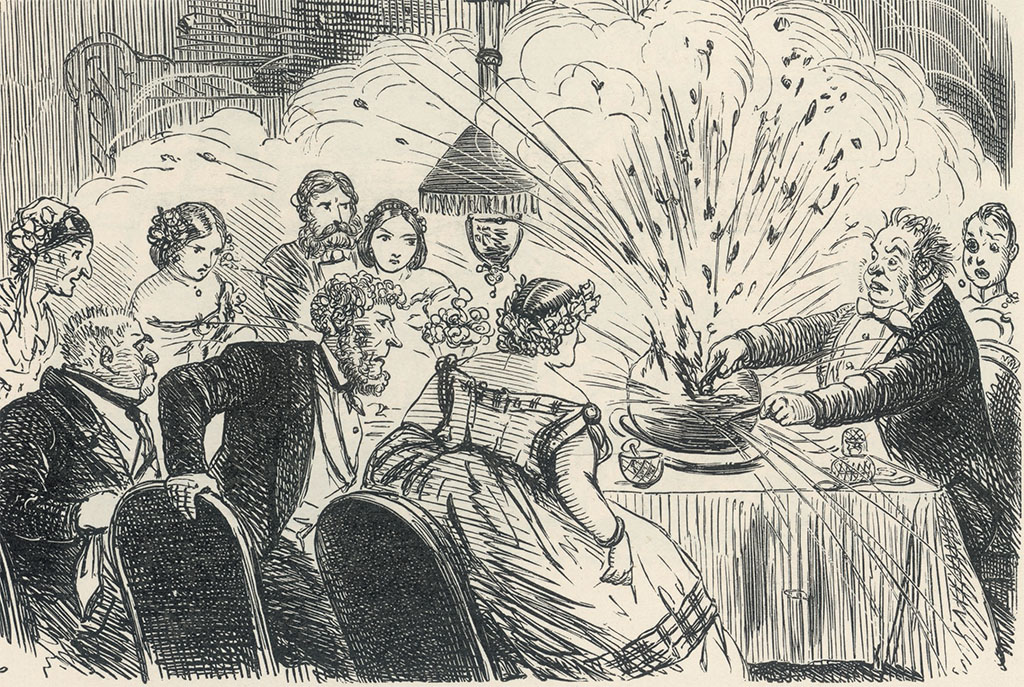 “Brown entertains his friends wi’ a haggis” is the caption of this old Punch cartoon, as Brown’s friends are splattered by the sausage’s stabbing at the table on Burns Night. On the whole, many people would actually prefer wearing haggis to eating it.[/caption]

The accompanying meal often includes such traditional Scottish dishes as cock-a-leekie soup, bashit neeps an’ champit tatties (mashed turnip and mashed potatoes). A beef dish or steak pie may be added, and whisky is often poured over the haggis to increase its flavor. Wine is frequently served with the meal, and whisky before and afterwards. Dessert is often clootie dumplin’ or Scottish trifle, followed by Scottish oatcakes and cheese.

After the meal, an entertainer may perform. He or she usually sings a song by Burns (for example, “My Luve Is Like a Red, Red, Rose” or “Ae Fond Kiss”), plays an instrument or recites a favorite poem by the bard. “Tam O’ Shanter,” “To a Louse” and “A Man’s a Man for A’ That” are popular choices.

Then a keynote speaker talks movingly and wittily about the life of Burns. His poetry, politics, love of Scotland and faith in the common man are frequent topics. Afterward, the speaker asks the audience to toast “the immortal memory of Robert Burns.”

Next comes the toast to the lassies. Word has it that this element of a Burns Supper was a bit bawdy during the early years of the event, when it was usually limited to men. In recent years, however, as women have been invited, the tone of the toast has become tamer, though still humorous. However, now as then, common themes in this toast include Burns’ attitudes toward women—and his many paramours. A woman replies to the toast to the lassies with a toast of her own. She may wonder what Burns’ many ladyloves thought of him. It was probably not what he thought of himself. Here is her chance to even a score in the battle between the sexes.

A final entertainment may follow before the chairman thanks everyone associated with the dinner. Then everyone sings “Auld Lang Syne.” When they come to the lines “And there’s a hand, my trusty fere! And gie’s a hand o’ thine!” everyone joins hands with those to either side; then each crosses his hand before him and, with his hands still crossed, again joins hands with those to either side.

Although this format is generally followed, Burns Suppers are very flexible affairs. They don’t have to occur on the poet’s birthday. Any day will do, though most of these events are in January or February. Dinners can be small or large; they can be held in homes, churches or halls; and they can be formal or casual but should always be fun and show genuine appreciation of Burns and Scotland.

The popularity of these events may lie in several factors. Because Burns loved his country, its ways and its dialect, he has become a symbol of Scottish pride. Burns Night is an opportunity to hear the pipes, wear a kilt and eat traditional Scottish fare. Burns also stands for the common man, the poor farmer’s son who wrote poetry that charmed a nation. Perhaps this is why Burns and Burns Suppers are popular in Russia and China. Finally, Burns’ life, with its struggles, loves and accomplishments, is fascinating.

As Murdo Morrison of the Robert Burns World Federation observes, Burns is more beloved than many better-known poets. “There are no suppers for Shakespeare,” he points out, “no breakfasts for Byron, no teas for Tennyson.” But every year, across the globe, people gather to preserve Burns’ immortal memory and to shout, “Give her a haggis!”