A Day to Visit: Chichester 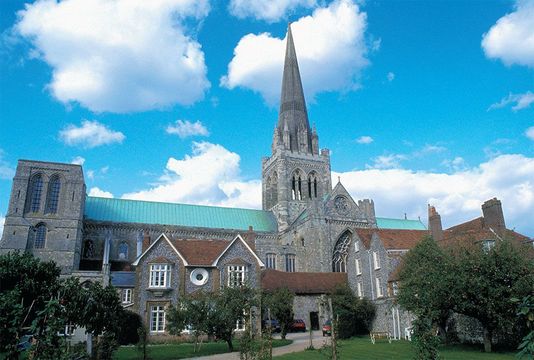 Have you been to Chichester?

Even without its award-winning art museum, 900-year-old cathedral and a prestigious theater complex, the city of Chichester in West Sussex would still be a most pleasant and attractive place to visit. Situated between England’s historic South Downs—an area of outstanding natural beauty—and the sea, Chichester is surrounded by a stretch of ancient city walls and filled with pretty streets lined with medieval buildings and elegant Georgian houses, parks and gardens. Chichester is a lovely place to spend a day.

The slim, delicate spire of Chichester Cathedral, reminiscent of the taller spire that adorns Salisbury Cathedral to the northwest, can be seen against the sky from the window as the train nears the city station. This spire dates to Victorian times, when it replaced the old steeple that had crumbled and collapsed. Chichester, like many English cities of its size, is made for walkers. It’s a short stroll from the train station to the Market Cross, at the junction of the city’s four main streets—North, South, East and West—which still follow the road plan set out in Roman times.

Adorned with decorative symbols and standing 50 feet high, the cross dates to 1501 and is considered by many to be the finest of its kind in England. Above the medieval structure is an octagonal cupola that centuries ago provided overnight shelter for merchants coming into the city.

Chichester Cathedral, just steps from the cross, has stood in the heart of the city since it was dedicated in 1108. The cathedral is known for its blend of ancient and modern art. For instance, the Chichester Reliefs, two carved stone panels depicting the story of the raising of Lazarus, date to the 12th century. Works from the 20th century, including a stained-glass window by Marc Chagall, a tapestry by John Piper and a painting by Graham Sutherland, share space within the cathedral. Outside, the perpendicular bell tower is the only such detached structure still in existence in the country and therefore considered quite unusual. St. Richard’s Walk, lined with Georgian houses adorned with window boxes filled with colorful flowers regardless of the season, is located at the end of the cathedral’s 15th-century cloisters. This area offers total peace and tranquility just yards from the bustling city shops.

During the day, Chichester’s streets—with their small-town ambiance—are alive with interesting shops and restaurants. Stop into Strawberry, just off South Street, for fine women’s clothing and quirky accessories.
The Butter Market in North Street was created by the architect John Nash, who is responsible for major works in London—including the design of Regent Street. Opened in 1808, the Butter Market was a food and produce market. A second floor was added about a century later, and for years it has housed small individual shops. Change may be in the air, however, as the Chichester City Council has called for a major renovation of this architectural treasure over the next few years.

For lunch or late-morning or afternoon tea, St. Martin’s Tearooms in St. Martin’s Lane just off East Street and Purchases, in a Georgian townhouse with an impressive white portico entrance on North Street, offer good food in traditional settings.
Detour off the four main streets and wander along The Pallants. North Pallant, South Pallant, East Pallant and West Pallant are miniature versions of Chichester’s main streets, and most of the houses lining them were built in the 18th and 19th centuries. The word “pallant,” from a Latin word meaning “exclusive jurisdiction,” relates to a time before the middle of the 16th century, when the archbishop of Canterbury had control over much of this city. The large house on the corner of North Pallant and East Street is the Pallant House Gallery, which won the coveted 2007 Gulbenkian Prize—Britain’s largest single arts prize, given in recognition of the best new development of the previous year in any museum or gallery within the United Kingdom. 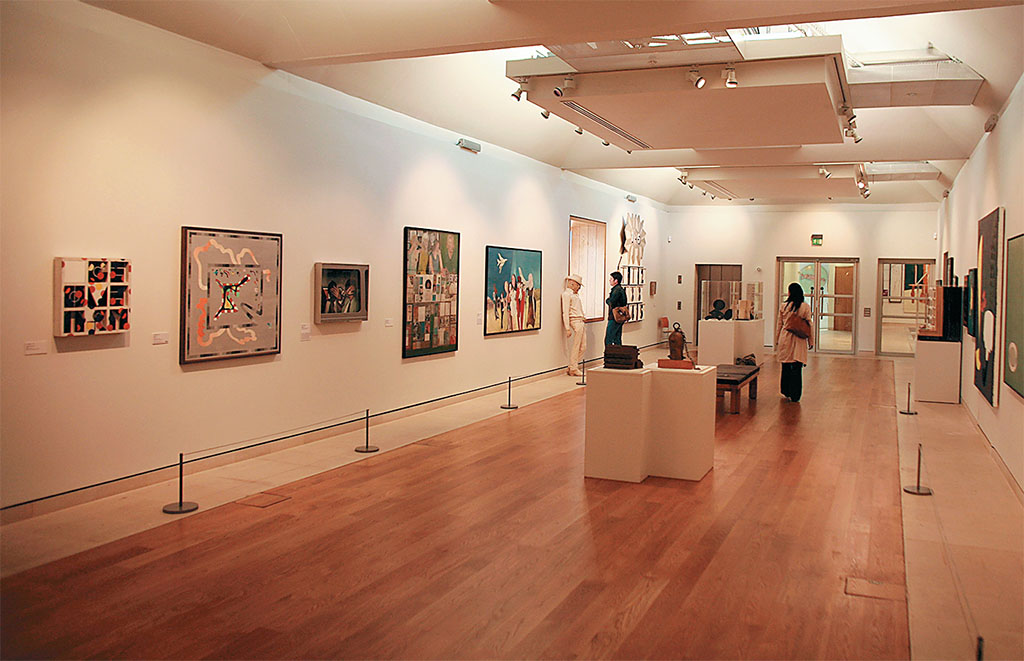 Pallant House Gallery’s new development added a contemporary wing to the original brick, Queen Anne town house built in 1712. The end result is an outstanding place in which to view the collection of 20th-century art, considered one of the finest collections of British art outside London’s Tate Modern. Its new beautifully landscaped garden offers the perfect place to enjoy a cup of tea from the gallery’s restaurant.

In 1959 a local resident saw a television program about the Stratford Shakespeare Festival Theatre in Canada. He decided there should be such a theater in Chichester and contacted Sir Laurence Olivier. The Festival Theatre in Oaklands Park on the edge of Chichester became a reality in 1962, with Olivier as its first artistic director as well as lead actor in many of the initial productions. The name Festival Theatre dates to that first year when the season, a brief one with only three plays, seemed similar to a “festival.” As the Festival Theatre became more established, a second facility—the Minerva Theatre—opened on the same grounds in 1989. Many of England’s best-known actors appear in productions at these theaters through their April-October season. Over the years a number of productions have begun at Chichester and later moved on to London’s West End.

An evening performance at the Chichester Festival Theatre might require an overnight stay in town, since the last train leaves for London about 10:30 p.m. The Ship Hotel on North Street and The George and Dragon, situated on the historic North Walls walk, are comfortable choices for an overnight stay.

Finally, the best way to see Chichester may very well be from its elevated ancient walls, which form a 1.5-mile circular walk around the city. The walls date from medieval times, but were built on Roman foundations. 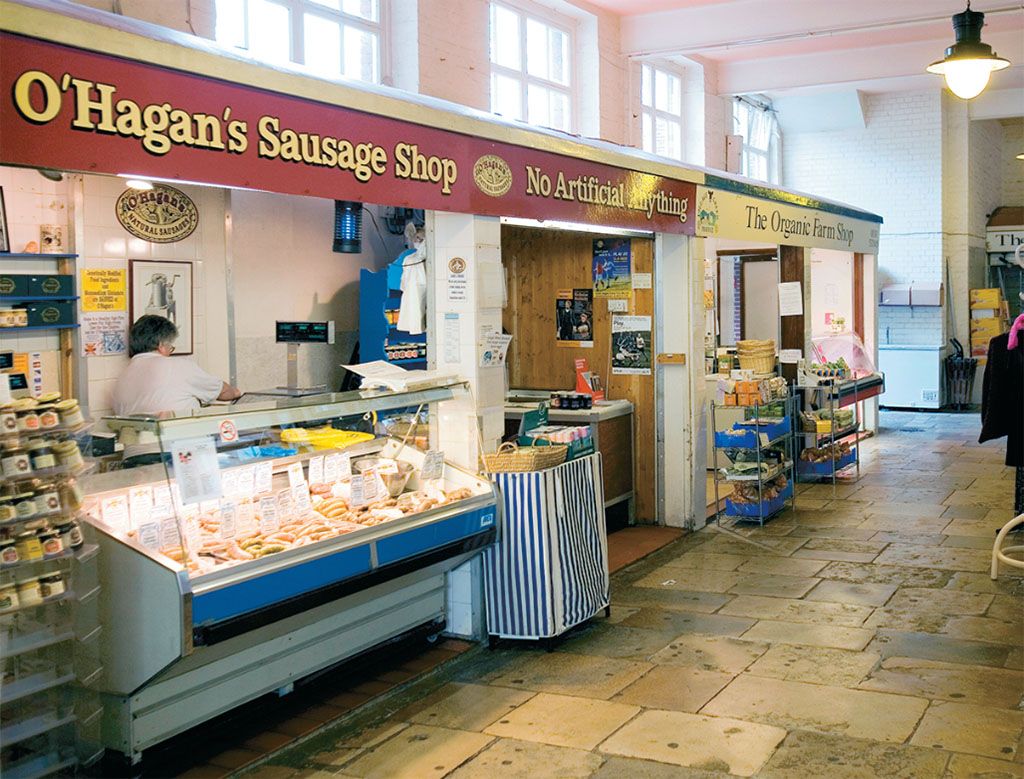 Chichester is easily reachable by direct train service from London’s Victoria Station; the 65-mile journey takes just 90 minutes. A day in Chichester offers a satisfying glimpse of a city filled with history and one that represents a storybook picture of an idyllic English town. Arrive in Chichester early in the day for a quiet visit to the cathedral and the Pallant House Gallery, do some shopping and enjoy lunch at a local restaurant, then take in a matinee at the Chichester Festival Theatre on a Thursday or Saturday afternoon, and be back in London for dinner.
A taste of Chichester will make a sweet indulgence for the return train journey to London. Purchase a few delicious frosted cupcakes from the Swallow Bakery on North Street or some luxurious English chocolates from Montezuma’s Chocolate Shop on East Street, one of five such shops in various locations in England.
“Outside the special places like Oxford, Cambridge and Bath (which in any case are bigger), the city has few rivals, and certainly none among the smaller towns,” commented a Dr. Thomas Sharp in the mid-18th century. Visitors over the centuries will agree that Chichester is one of the loveliest cities of its size in England.