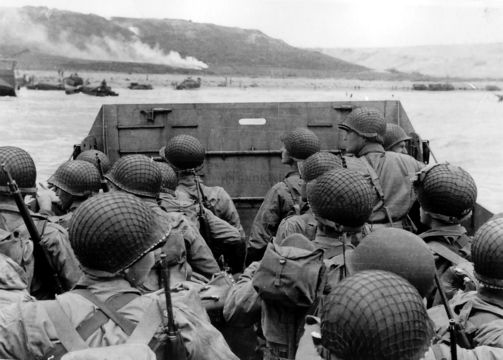 Detailed reports from embedded journalists both World War Two fighters and professional journalists and photographers give an incredible perspective on the reality of D-Day, and the Normandy landings, on June 6, 1944.

'This is history; it is a thing I can't be eloquent about in an aeroplane because I've got engine noises in my ear. But this really is a great moment for us... I feel detached, and that awful feeling that the great history of the world is unfolding before us at this very moment....'

Hungarian-born cameraman Robert Capa's photograph showing an American soldier crawling on watery Omaha Beach amidst the rain of hot shells has become the most famous image of D-Day. But virtually no one, outside of the British perhaps, remembers that one of the best eyewitness accounts of that day's fighting was recorded for BBC Radio by RAF Air-Commodore W. Helmore. Very properly, a great deal has been written about the courage and skills of the troops who fought that pivotal World War II battle. Less well know is the story of the journalists, mainly British and American, who 'went in' with the combat troops on the first day of the invasion, and in its aftermath.

Helmore was serving as an RAF observer flying in a Mitchell bomber when the BBC allowed him to record his impressions of the landing. An accomplished professional, he had invented the Helmore aircraft searchlight and tester of in-flight fueling techniques and had already earned a Ph.D. and C.B.E., and from 1943-45 he was MP for Watford. In addition, he had composed 'The City of Dreams,' a song that became a big hit in America.

Back on the news-hungry Allied home fronts, many days passed before the print media published semi-complete details of the Normandy landings. Early on, British and American newspapers ran stories based mainly on official Allied communiqués. For instance, they reported Supreme Commander Gen. Dwight D. Eisenhower's historic address to his troops: 'You are about to embark on a great crusade. The eyes of the world are upon you and the hopes and prayers of liberty-loving people go with you. We will accept nothing less than full victory.'

Billboards, placards, chalkboards--and gossips--announced the assault in Britain. Most reports contained few accurate details, although not for lack of trying. Many Allied newspapers, magazines, and radio reporters, photographers, and cameramen went in at Normandy. But transmitting stories quickly back to the home fronts proved difficult, even after the first few days. Most combat correspondents found themselves engulfed for several days and even weeks in the heavy fighting that followed the landings before they could do the initial clashes justice.

However, one fortunate Allied reporter beat his colleagues to the punch. A British officer tipped off Ross Munro, of the Canadian Press, that a destroyer was heading back to Britain from a Normandy beachhead to pick up General Montgomery. Munro thus sent back the first dispatch from the coast of France, perpetuating his impressive record of success. Munro's dispatches had previously become the first eyewitness print stories published from Dieppe, Sicily, and Italy.

One Allied reporter's fate was similar in its early results to most others. CBS's Walter Cronkite writes of having met with Canadian print correspondent Charlie Lynch, who had just carried three homing pigeons with him in the assault on Omaha Beach. Soon after Lynch had arrived there, he'd typed up his first dispatch and sent copies with all three birds. All three of them proceeded to fly toward Berlin.

CBS radio reporter George Hicks, located on USS Ancon, filed the best American radio report that 6 June. Of the approach of the 5,000-ship invasion armada to the coast of France, he said: 'You see the ships lying in all directions, just like black shadows on the grey sky.... Now planes are going overhead... Hearing fire now just behind us... bombs bursting on the shore and along in the convoys.....' Then he added, 'If you'll excuse me, I'll just take a deep breath for the moment and stop breathing.' His initial D-Day recording was aired in parts by CBS, NBC, and the North American Service of the BBC, between 11 and 11:30 pm, Eastern War Time, on 6 June--although the transmission of those broadcasts broke down several times. From D-Day on, recorded news became more prevalent in the radio industry. Previously, producers believed recorded messages could be falsely altered, and so had favoured live broadcasts.

The military and the media

The buildup to D-Day had been secretive and effective. As Allied troops rehearsed in Britain, Allied journalists made their own preparations for The Second Front to take the pressure off.

Allied leaders treated the media almost as another branch of the military by June 1944, so completely had media owners and staff cooperated in defeating the Nazis. A week before the invasion, Allied journalists had been put on trains and shipped to Scotland as part of a broad deception plan designed to make it look as though something big was happening in the north. But when the time came for the actual invasion Allied governments did everything they could to help those same journalists cover what was to come. No fewer than 558 writers, radio reporters, photographers, and cameramen were accredited for the landing.

The correspondents soon sent back some 700,000 words recounting the events of the first day. When you reading these reports today, you can't help feeling that the size and violence of the invasion overwhelmed them, making most reporters less than eloquent at the time. Radio reporters seemed to manage best because, unlike the print media, it allowed reporters as much space (time) as needed, provided the circuits didn't break down from bad weather or faulty wires.

The BBC assigned 48 correspondents to the D-Day operation, including Chester Wilmot in a glider, Richard Dimbleby with the RAF, Robert Dunnett with the US Army, Stanley Maxted in a minesweeper, and Robert Barr with Gen. Eisenhower at Allied Headquarters. Seventeen BBC men landed on the beaches that day.

American journalistic preparations had gone on for several years, ever since CBS Radio had assigned Edward R. Murrow to organize radio programmes in London in the late 1930s. Murrow lobbied with New York headquarters a long time before the CBS top brass allowed him to personally report news, which he did famously with his patented 'This is London' lead-ins.

CBS management thought Murrow, the most famous American journalist working regularly in Britain during the war, was too valuable to send across the English Channel on D-Day. Instead, he read Eisenhower's announcements via radio to Allied troops, letting them know how important they were to the super-historic operation. Murrow had already proven his courage and skills. His London After Dark programmes during the Blitz included many late-night reports from the roof of the BBC's Broadcasting House, a prime Nazi target. Murrow often broadcast from BBC facilities, because it had the gear to do the job.

James Cameron, the noted British journalist who would eventually cover many global hotspots brilliantly and earn a C.B.E., also missed D-Day. After his first wife died in childbirth in May 1940, he tried to enlist. Due to 'organic cardiac disease,' he was rejected and told he should never be at an altitude of more than 3,000 feet. Later, he flew so often and high, he'd recall, 'In the years to come, in Germany, Korea, Malaya, Indo-China, I was to reflect upon the curious durability of the officially infirm.' All this came later, though. Cameron's boss kept him at home during World War II.

Cameron's future mate during the Korean War, Bert Hardy, chief photographer for Picture Post, did go in at Normandy a few days after D-Day and went on to brilliantly cover the Liberation of Paris, and the crossing of the Rhine. Among his other notable coverages for Picture Post were his sterling Blitz photo essays, one of which earned him the first photographer credit in that magazine's history. Hardy was a sergeant in the Royal Army Photographic Unit from 1942-46.

Picture Post's founding editor, the Hungarian Jew Stefan Lorant, had been imprisoned by Hitler in 1933, and his attacked Hitler early and often. Its publisher/owner Sir Edward Hulton helped found the Home Defence School, which played its part in effective home front defence. And in addition to the stable of legendary photographers Picture Post employed, some of the best writers of the day wrote for it.

British and American journalists working in Britain during the war developed what writer James Tobin has called a'structure of solidarity.' Despite the rivalries that existed between Allied reporters of various nationalities, there was also a keen sense of shared obligation, not only to report their stories and take their pictures well, but also to push hard for Allied victory. All of them wanted to report well on actions like D-Day and the war generally--and help eliminate the Nazis.

In the end, the legendary American reporter Ernie Pyle, who went in on 7 June at Normandy, wrote the best summary of the early impact of D-Day: '...it will be some time before we have a really clear picture of what has happened or what is happening at the moment. You must experience the terrible confusion of warfare and the frantic nightmarish thunder and smoke and bedlam of battle to realize this.'

More than 150,000 Allied troops took part in the D-Day assault, and 9,000 of them died on 6 June. Eleven more grueling, bloody months passed before Germany surrendered, but surrender it did. V-E Day is still celebrated every year, and though the war was not fully won until August 1945's atomic bomb blasts in Hiroshima and Nagasaki, for the British people, the long, hard battle with their biggest nightmare, Nazi Germany, ended on 8 May 1945.